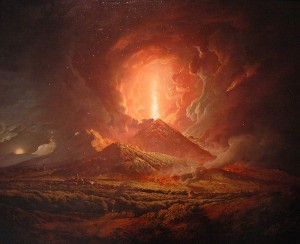 Today marks the two hundredth anniversary of the explosion of Mount Tambora in the Dutch East Indies (now, Indonesia) – an  event which caused catastrophic damage not just in the Far  East, but to weather patterns throughout the globe. It led to what has been termed ‘the year without a summer’; to countless deaths and starvation; to crop failures world-wide   – and to the most glorious sunsets, inspiring artists like Turner to experiment with ever-bolder use of colours to try and capture Nature’s glory.

The first sign that a catastrophic event was about to unfold was on 5 April 1815, when thunderous explosions were heard upwards of eight hundred miles away. They were noted by Sir Stamford Raffles (the man who went on to found Singapore, and who gave his name to Raffles Hotel) and apparently  five days later ‘a sound like distant gunfire’ was detected on Sumatra, some sixteen hundred miles away. This incredible noise was followed by a massive explosion, estimated as being four times more powerful than Krakatoa, as Mount Tambora blew itself to pieces. Ash, rock, pumice and a pyroclastic flow swept down to the sea on all sides of the mountain , killing tens of thousands of islanders. A tsunami followed, causing more devastation, destroying homes and crops, and resulting in mass starvation throughout the Dutch East Indies.

What the explosion also did was to pump thousands of tons of sulphur dioxide into the upper atmosphere, where the jet stream dispersed the gas over all parts of the globe. Fogs were commonplace, and snow fell in unseasonable times of the year in the Northern Hemisphere, as temperatures plunged. In India the monsoon pattern was disrupted not just that year, but for the three following years. Again, this led to crop failures, starvation, and innumerable deaths from lung disease.

This global phenomenon was called all sorts of different things at the time – from  ‘the year without a summer’  to ‘the Poverty Year’, ‘The Summer that never was’ and the rather evocative ‘Eighteen hundred and Froze to Death.’ In Europe, the drop in temperatures led to the failure of wheat and potato harvests. Mass starvation followed, with the worst famine of the whole of the nineteenth century. Food riots broke out, grain stores were looted – and beggars filled the streets. Widespread flooding followed the heavy rainfalls produced by the abnormal climatic conditions, leading in turn to typhoid and cholera outbreaks spread by contaminated water.

For several decades the dust in the atmosphere gave rise to splendidly-coloured sunsets, captured by Turner throughout the 1820’s and 1830’s, as in these two: 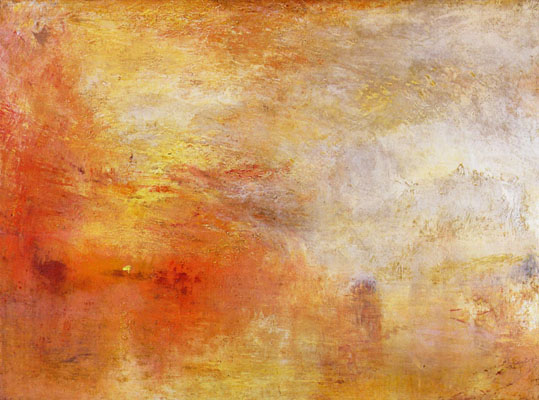 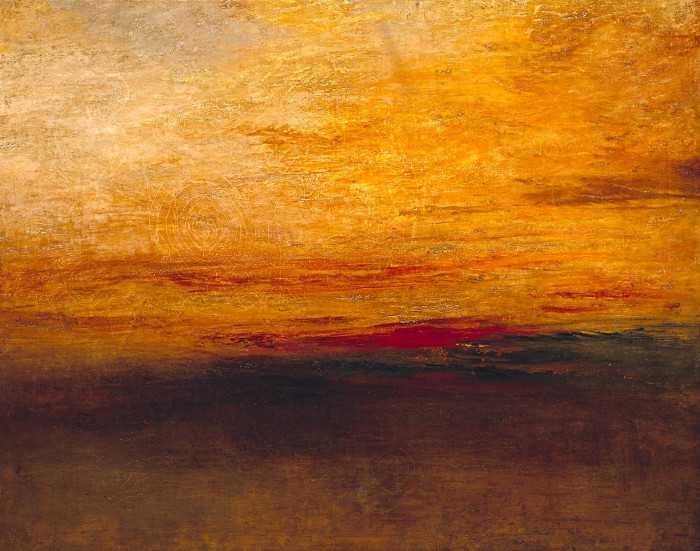 (The picture at the start of this blog of the volcano erupting is actually of Vesuvius, by Joseph Wright of Derby, not of Mt Tambora; but then, Wright never saw Vesuvius erupting (it was dormant when he visited it) so I am using his imaginary view to represent Tambora. It appears courtesy of the Huntington Library, San Marino, California).