In 1758 Richard Hall was living in the area of Southwark called the Bridgefoot when London Corporation decided “to do something” about London Bridge. Until 1749 it had been the only structure linking the North and South banks of the River Thames, but the medieval bridge was hopelessly outdated. I rather like the description of it as “a wall with holes in it” since ships were held up for days trying to pass through the narrow gaps between the arches. Pedestrians jostled and fought their way across the carriageway, threading their way round the shops and houses cluttering up the road. 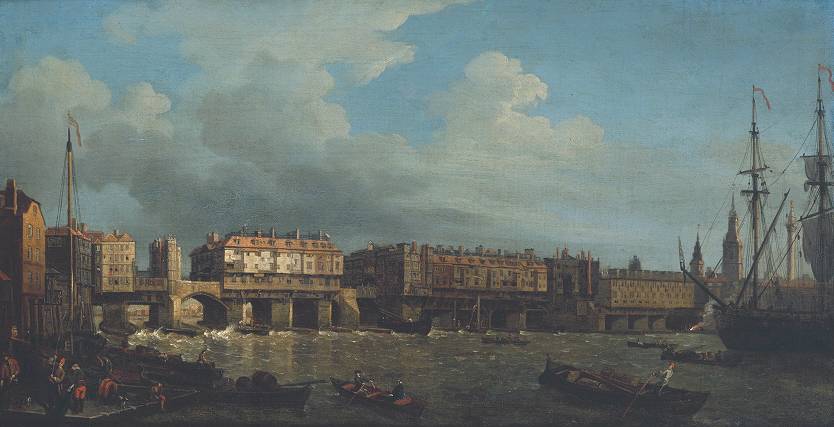 Parliament finally got round to tackling the problem in 1756 when it passed a Bill enabling the Corporation to  buy up and demolish the buildings littering the superstructure, and to improve the access routes. A passage of thirty one feet open for carriages, and seven feet on each side for foot passengers, was to be constructed and it was directed that there should be a balustrade on each side. The Corporation were authorised to demolish one or more of the central piers so as to create the new Great Arch.

Pulling down the shops and tenements, and dismantling the central pier would have caused chaos if temporary arrangements had not been put in place to enable pedestrians to continue to be able to cross the river. A decision was made to construct a temporary wooden bridge immediately along the western side of the stone bridge, supported on the starlings (lozenge-shaped buttresses on either side of the piers).

The improvements didn’t go down too well with the ferrymen who made their living transporting people across the river: there is every indication that it was a disgruntled river worker who set fire to the temporary structure on the night of 11th April 1758.

A reward of two hundred pounds was offered to catch the culprit but no-one was brought to justice. The temporary bridge had been totally destroyed in the blaze and workmen had to start all over again. 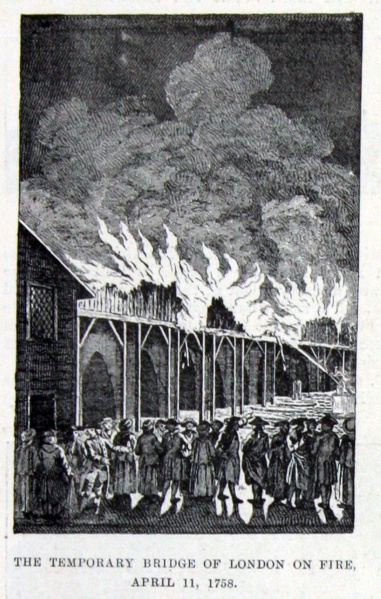 Grace’s Guide has this picture of the fire , and I can well imagine Richard rushing down to the river bank at eleven o’clock at night to see the blaze which had just broken out.

The British Museum site has this etching  showing the damaged bridge the day after the fire, with its central pier missing: 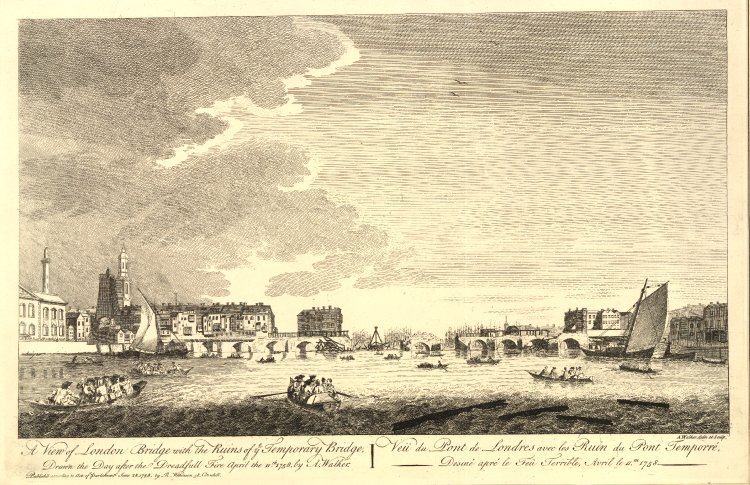 In the foreground you can see the timbers from the temporary bridge structure floating on the river. Ironically when the bridge repairs were finally accomplished it left the Corporation of London with a spare piece of land on the City side of the river (on the extreme left, just in front of the spire of the Wren church of St Magnus the Martyr). Here, my ancestor constructed a haberdashery shop and four-bedroom house  above – the original Number One London Bridge.

One Response to “11th April 1758: A repeat visit to the fire at London Bridge”