13th June 1778: the exorcism of George Lukins, “the Yatton demoniac”

Temple Church in Bristol is a strange place: hit by an incendiary bomb in the last war it is an empty shell, but the tower remains. It leans – as it has done for hundreds of years, so that the top is some five foot away from the vertical.

But the oddest thing about the church probably occurred on Friday 13th, 1778 when the vicar, the Reverend Easterbrook, accompanied by a collection of half a dozen Wesleyan Ministers, assembled in the vestry. If they thought this would be “away from prying eyes” they were wrong – the astonishing noises emanating from the vestry quickly produced a crowd of nosey-Parkers, and within days, news of the goings-on in the vestry was carried around the whole country.

The seven clergymen had gathered because of one man, a George Lukins from the nearby village of Yatton. He claimed to be possessed by the Devil (well, not just one devil but seven devils, and he insisted that it would therefore take seven clergymen to exorcise him).

Lukins was 44, had originally trained as a tailor, but for some years had apparently been subjected to fits of an alarming nature. He uttered strange animal sounds, barked like a dog, argued with himself in different voices, and behaved in a violent manner. Some claimed he was a victim of witchcraft. He himself claimed that he had been fine until one day when he was performing an old mummers play at Christmas time when he had felt a “Divine slap” which felled him to the ground and left him possessed by demons.

The Rev Easterbrook had got involved because one of his parishioners by the name of Sarah Barber had approached him for help a fortnight earlier. She knew of George Lukins because her husband had emanated from Yatton. She knew that members of the medical profession had examined Lukins, had declared him to be incurable and merely dosed him with laudanum, and she urged Easterbrook to help. He agreed to do so “little expecting that an attention to such a pitiable case would have produced such a torrent of opposition, illiberal abuse upon the parties concerned in his relief”

The Devil, by William Blake

So on this auspicious day the seven ministers gathered: Lukins went through his full repertoire of barking, then speaking in a high pitched female voice, then answering gruffly and reciting a Te Deum to the Devil. The clergy responded with prayers and hymn singing and in due course commanded the demons to return to hell at which point George Lukins exclaimed “Blessed Jesus!” praised God, recited the Lord’s Prayer and then thanked the Methodist and Anglican clergymen. Thereafter he was calm.

An account appeared in the Bristol Gazette but then other people stepped forward to say that the story was false: Lukins was well known for his ability as a mimic and ventriloquist, being able to alter his voice. Other clerics and members of the medical profession waded in, and before long the whole country was talking about exorcism and demoniacal possession. An article in the Gentlemen’s Magazine and Historical Chronicle claimed he was suffering from St Vitus Dance or epilepsy, others said he was an imposter, others that he had “ a grievous hypochondriack disorder” or was a drunkard, or that he had been bitten by a mad dog.

Whatever: Lukins had had his moment in the spotlight. Thereafter he resumed a quiet life, attending Wesleyan services and gaining occasional employment as a bill sticker. The Poor Laws meant that Yatton (as his place of permanent residence) was responsible for his welfare and the parish records there show 10s 6d ‘temporary relief’ was paid to him in 1788. He was promised 9s in future “provided he goes to Mr Say and attends him in any kind of work he can do” but George Lukins declined because he wanted to live in Bristol. Eventually it looks as though Bristolians were fed up with being asked to look after George – as far as they were concerned he was Yatton’s problem, not theirs.

The death of George Lukins was reported in the Bristol Mirror of February 1805 . The report states that for some time prior to his death Lukins had been an out-patient at the Bristol Infirmary for a bad leg and hydrocondriacal affections. Latterly he had been reduced to beggary and had managed to scrape a scanty existence by the sale of little books. A sad, lonely, ending for a man whose story had at one stage gripped the nation. 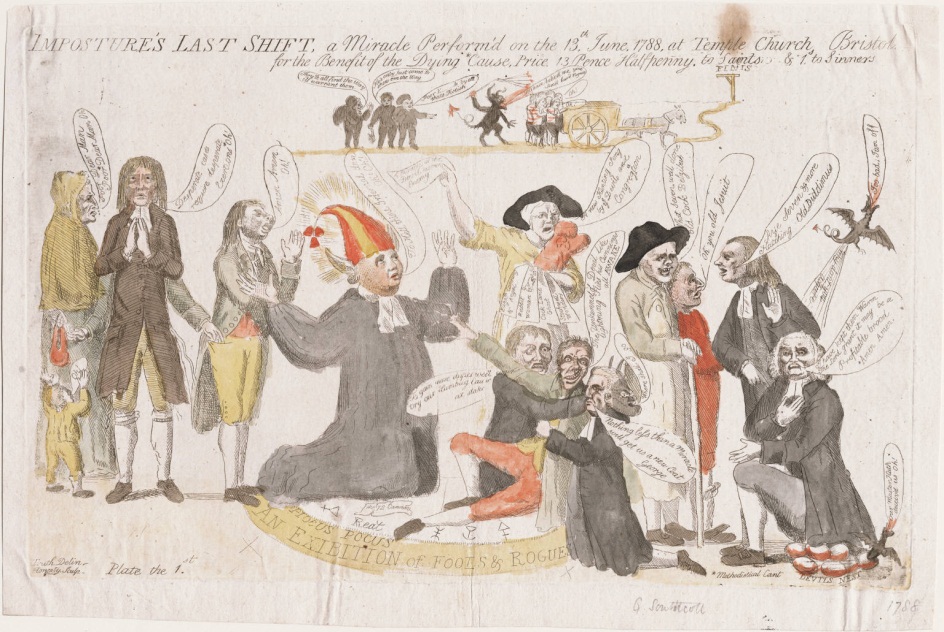 This image appears courtesy of the Lewis Walpole Library site. Entitled ‘The Impostures Last Shift’ it shows the exorcism being carried out by the seven clergymen. The banner at the bottom reads ‘Hocus Pocus  –  An Exhibition of Fools and Rogues’