O.K., I admit it may be a little obsessive, but I enjoy reading obituaries. Old ones. So a chance to meander through the list of “obituaries of remarkable Persons, with Biographical Anecdotes” in the 1794 Edition of the Gentleman’s Magazine was not to be missed. Fortunately the records have been digitised and can be found here 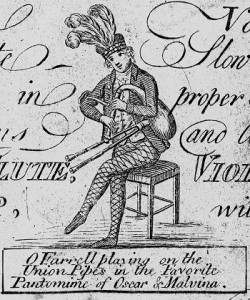 I would challenge anyone to deny that they would have wanted to be at the funeral of “Mr Courtenay, the celebrated performer of the bagpipes. He died of dropsy which he is supposed to have contracted by hard drinking and was buried in Pancras church-yard. The funeral procession was extremely numerous and extended from the Hampshire Hog, in Broad Street St Giles, a considerable way into Tottenham-court Road. The number of those in mourning could not be less than 30 or 40 couples, who were preceded by two Irish pipers one of whom played on the union pipes used formerly  with such wonderful effect by the deceased.. The body was waked at the Hampshire Hog….Courtenay was a wet soul, and everything about the body to its interment, was entirely correspondent. During the continuance of the wake the greatest profusion of liquors was distributed. At the church-yard the same liberality in the distribution of liquors to everyone who chose to drink was observed, and the company happily departed without fighting”

The description “union pipes” was an anglicised version of the word Uilleann, from the Irish word uille, meaning ‘elbow’, emphasizing the use of the elbow when these pipes were being played. I just love the idea of “waking” the  dead – and of the deceased being a ‘wet soul’. 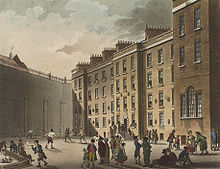 The Racquet Grounds at Fleet Prison

January 1794 saw the early demise of the 26 year old Charles Lewis Esq at his house at Park Lane Knightsbridge “a gentleman well known, and what is more rare, well respected at Newmarket and other such fashionable places.The eventful history of Mr Lewis’ life to a common observer has much the air of a tale of other times. He was the only son of Mr Lewis, a tradesman in London, who from encumbered circumstances was in the Fleet Prison, attended by his Wife, when his son was born, and where he continued some years.” 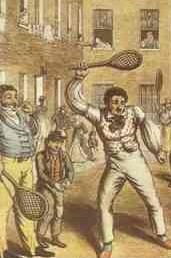 Curiously, the debtors prison had a racquet court, which perhaps explains the paragraph in the obituary which states that the late Mr Lewis had “an unalterable regard for Tom Clark, his playmate and a fellow sufferer with himself, but not quite so happy, being left an orphan at a very early stage of his life, and reared only by the bounty of the prisoners. Clarke was a lad of parts…. and by making the balls and stringing racquets … has since supported his wife and family.”

“While Mr Lewis’ father was in the Fleet prison his wife lived housekeeper with a gentleman of fortune, who left him (Mr Lewis), in groundrents in and about Piccadilly, a fortune of 500 pounds a year.”
Mr Lewis appears to have been engaged to be married, to an heiress called Miss Edwards ”who had also a considerable fortune in her own power, and was said to be a relation of the gentleman who was his benefactor. Miss Edwards was of a consumptive habit, and though very ill, the day of their union was fixed, when from weakness a slight delirium seized her. Whether from accident or otherwise we know not, she fell from a two-pair of stairs window, and lived only a few days, leaving all her fortune to Mr Lewis.” 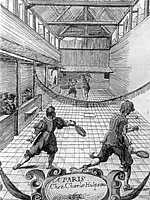 “His friend Tom Clark is sole executor to all his fortune, which is considerable, as well as the debts of honour due to him on the turf, Tennis Court etc which are of a considerable amount, and some of them from gentlemen of the first rank.
Mr Clarke, we are informed, has sold his interest as maker of tennis balls and stringer of racquets for the court in James Street to a pupil of his, Mr John Cater, for 75 pounds. Mr Cater is a genius of some note, and of a very respectable family in the west of England, in which he is said to be the heir to a fortune  of 100 pounds a year.”
I find this a fascinating insight into a world where chance tossed some people down and propelled others upwards: to go from the debtors prison to a world of considerable fortune, mixing with the great and the good, gambling at the Races, playing tennis for money, and so on. It leaves unsaid whether Mr Lewis proposed marriage to Miss Edwards because of her fortune, and where he was standing when she decided to take flight from a second storey window! There is also no mention of the illness from which he himself died. But what is clear is that the real winner was good old Tom Clark – an orphan raised in the Fleet who made good through hard work and enterprise and who went on to inherit Mr Lewis’ entire fortune. 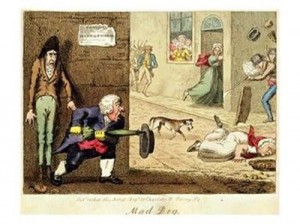 Not so fortunate was  the fate which befell John Edwards, labourer “at Swerford, under all the agonies of that dreadful malady hydrophobia” (i.e. rabies). Apparently he had been bitten by a mad dog “about three quarters of a year ago, but did not apply to the surgeon until the fifth day after the accident, when the part affected was cauterized and such medicines were administered as are deemed to be most efficacious….Neither the  poor man nor his wife in the least suspecting the cause of his complaint, the convulsions increased to a violent degree and further medical assistance was called in, but all to no purpose. He was perfectly sensible during the whole of his illness, knew everyone who spoke to him and took an affectionate leave of his wife. He shewed the greatest abhorrence to all liquids till some hours previous to his dissolution, when he was so desirous of drinking that he could not be satisfied.” 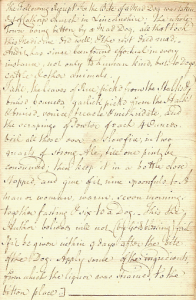 My ancestor had this useful remedy for rabies, writing in his notebook: “The following receipt for the Bite of a Mad Dog was taken out of Calthorp Church in Lincolnshire; the whole Town being bitten by a Mad Dog, all that took this Medicine did well, & the Rest died Mad. And it has since been found effectual in every instance, not only in human-kind but to Dogs, cattle, and other animals.” Basically he recommended a concoction of rue, garlic and treacle along with some scrapings of pewter boiled over a slow fire in two quarts of strong ale. A suitable dose was nine spoonfuls of the gollop “to be administered at seven in the morning to a Man or Woman…six to a dog”
And if that did not work immediately, then “rub some of the Ingredients from which the liquor was strained to the bitten Place.”  Simples!