Wander round London in  1818 and 1819 it would have been impossible not to have observed a new hobby  sweeping the capital – even if the observation was made as you hurled yourself to the ground in an effort to get out of the way. The hobby? Well, that was it: the hobby, hobby horse, dandy horse or pedestrian curricle.

It had been invented in 1817 by  by a German living in France by the name of Baron Karl von Drais. For that reason the early velocipede, the forerunner of the bicycle, was called a Draisine, or draisienne in France. The problem was that it was made of wood and iron, and weighed 48 pounds! Nevertheless, gentlemen saw it as a stylish way of travelling, quicker than walking, but more importantly still, of making an impression on the people you left trailing in your wake. 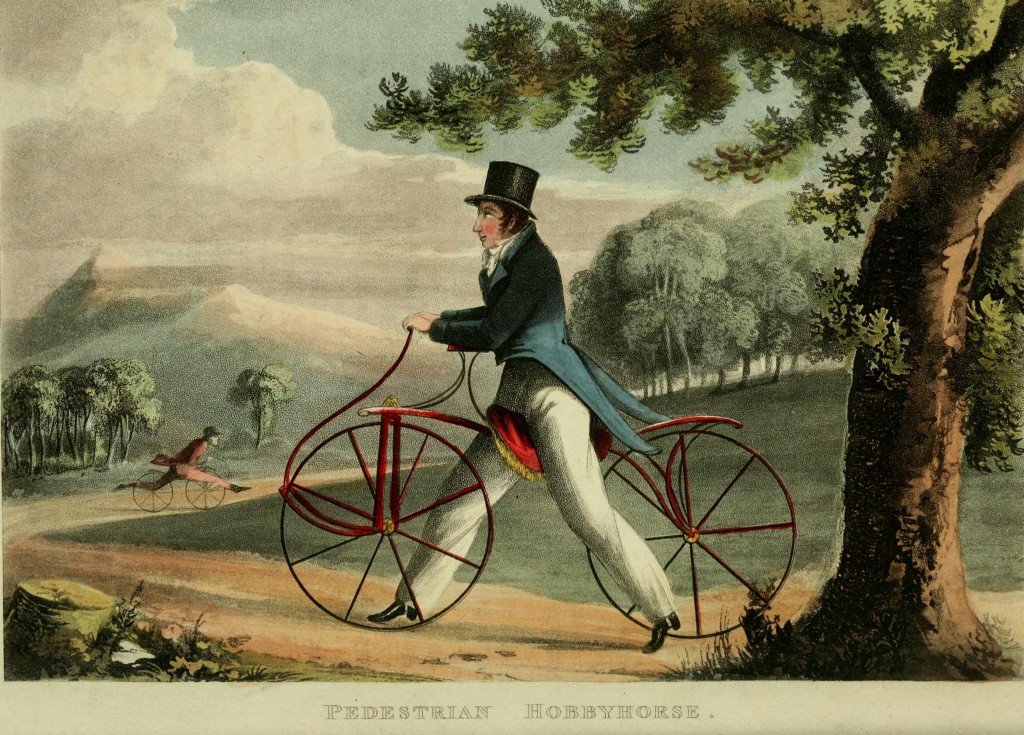 From Ackermann’s Repository – the Pedestrian Hobbyhorse.

The fashion for propelling yourself around town on a hobby was introduced to this country by the London coach-builder Denis Johnson. He made it a little lighter, and used a serpentine frame. Even though the Hobby horse had no pedals, no gears and no chain, you can clearly see the influences on the bicycle, which came into popularity later in the century. To move forward, the rider pushed on the ground with his feet, leaning forward while sitting on a central saddle. Without putting too fine a point on it, it must have been an absolute nut-crusher, particularly if you were travelling over cobbled streets! But no matter, it was fashionable (hence dandy-horse). They would have retailed for around £10 – quite a tidy sum for a bit of a gimmick. 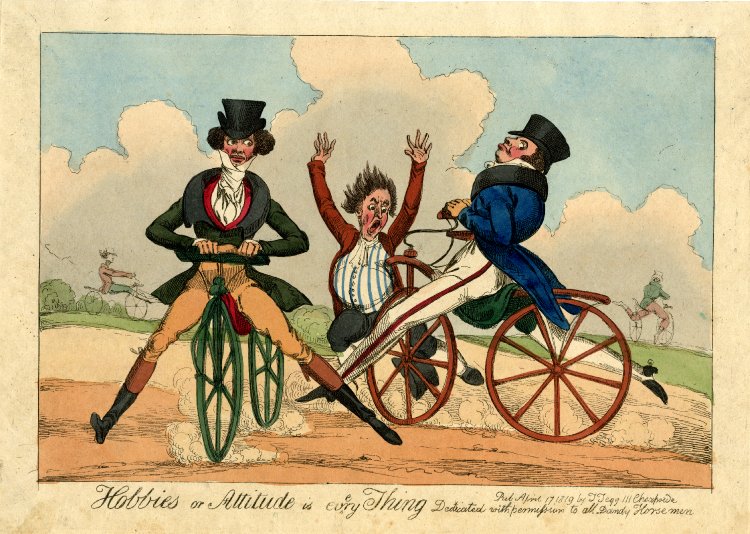 Here we have “Hobbies – or Attitude is everything” – and who cares about the poor pedestrian, scared witless as he is run down by two fashionably dressed dandies? His fault for venturing outdoors without a hat… 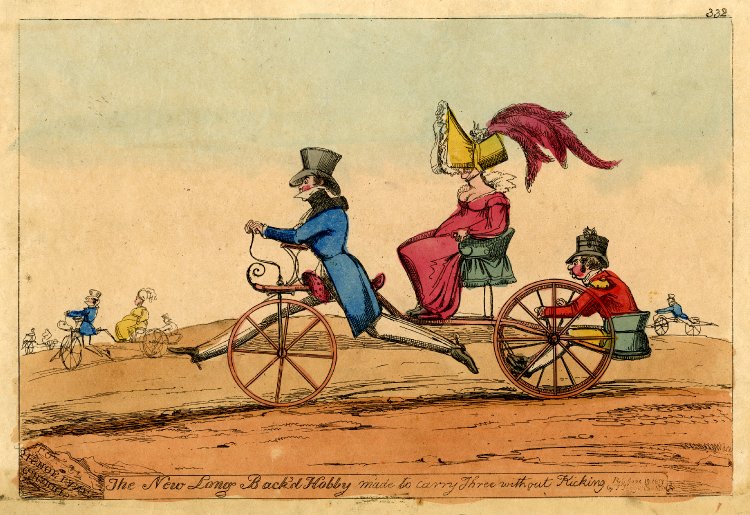 In “The New Long-back’d Hobby made to carry three without kicking” we see the  fanciful idea that the hobby could emerge as a genuine means of transporting the family around town. Note the brake-man holding on for dear life at the back, reminding me of a bob-sled! 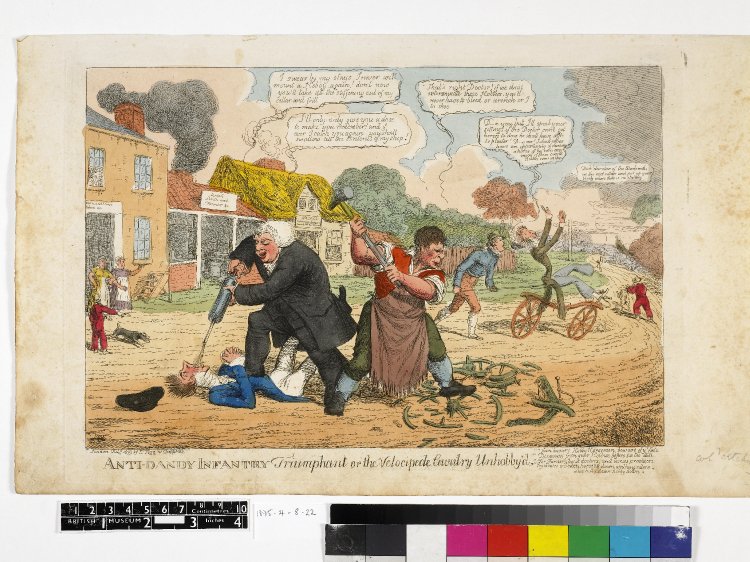 The craze looked set to  drive the horse off the road – and where would that leave all the vets, the ostlers, the grooms and the coachmen? In the caricature  above, “Anti Dandy Infantry triumphant – or the  Velocipede Cavalry Unhobbey’d” we see the village blacksmith defending his business of making horse-shoes by smashing a hobby to pieces, while the vet stands over the fallen rider about to administer a large dose of gollop from a giant syringe. It was published by Thomas Tegg in 1819 and appears courtesy of the British Museum site. They offer this explanation:

“The dandy, who is very thin, with a wasp waist, exclaims: “I swear by my stays I never will mount a Hobby again! don’t now you’ll take all the stiffening out of my collar and frill.” The man answers: “I’ll only give you a dose to make you remember! and if ever I catch you again you shall swallow all the contents of my shop!” The smith says: “That’s right Doctor! if we don’t exterminate these Hobbies, you’ll never have to bleed or drench or I to shoe.” Behind him (left) are houses bordering a village street. The mistress and maid of an inn, with ‘Man and Horse taken in’ over the gate, watch delightedly. Next door is a smithy: ‘Anvil Smith and Farrier &c.’, adjoining the thatched and gabled cottage of ‘Drench Veterinary Surgeon Cows Asses & Dogs cured’. In the middle distance an ostler prises a dandy out of his seat with a pitchfork; he shouts: “D—n you but I’ll spoil your sitting! if the Doctor can’t get horses to dose he shall have asses to plaster! D—n me! I shall never have an opportunity of cheating a horse of his corn any more if these Hobbies come in Use.” The road curves to the left and recedes in perspective, a sign-post pointing ‘To Coventry’. A man eggs on a dog to attack a retreating hobby-rider; and a tiny fugitive in the distance shouts: “Dick! steer clear of the Blacksmiths in the next village and put up your Hobby where there is no stabling.” After the title:

Dismount from your Hobbies before t’is too late,

whoa hobby, down hobby down.” 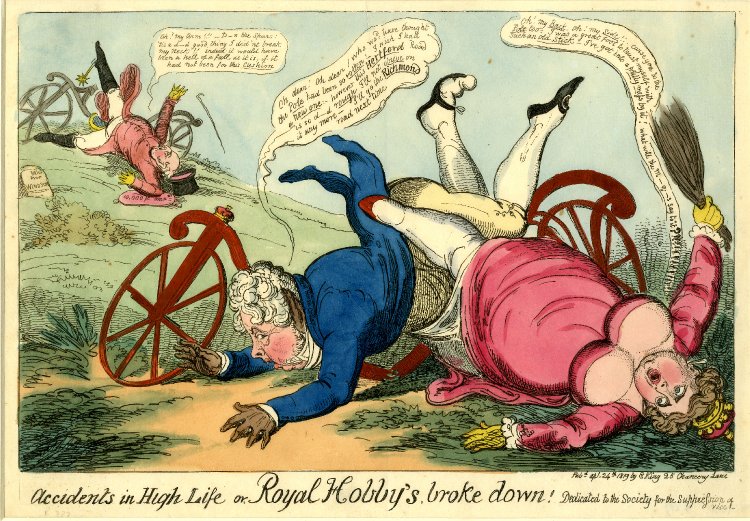 And to end with, a far-from-original one showing the Prince Regent falling to the ground, between the thighs of his female companion (Lady Hertford). I like the way the Prince is shown wearing a gouty shoe on his right foot (yes, I know, it is difficult at first to see who owns which foot!). It is called “Accidents in High Life, or Royal Hobbys broke down.”  In practice it is the pole supporting the central saddle which has snapped.

It was drawn by George Cruikshank and appeared in 1819. It appears  on the British Museum site with the comment:

” The end of the bar, curving over the front wheel, and surmounted by a coronet, is inscribed ‘Royal Roley Poley’. The Regent has (inconspicuous) ass’s ears; his coat-collar is inscribed ‘Royal Horse Collar’. On one foot is a buckled pump, on the other a sandal adjusted to gouty toes. He says: “Oh dear! Oh dear! who wod have thought the Pole had been so rotten! —I wish I had a new one:—however this Hertford Road is so d—d rough I’ll not drive on it any more—I’ll go the Richmond road next time.” Lady Hertford (right) grasps a birch-road in her right hand, her coronet falls off. She screams: “Oh! My Back!—Oh! My Side!! curse you & the Pole too: I was a great fool to trust myself with such an Old Stick—I’ve got into a pretty mess by it! what will the M—q—s say to it?!!! !!! !!!” In the background, on a grassy slope near a stone inscribed ‘Mile from Windsor’, the Duke of York falls violently from his velocipede; he wears boots with huge spurs; his left elbow rests on a cushion inscribed ‘10,000 pr annm’. He exclaims: “Oh! my Arm!!!—D—nthe Spurs! ’tis a d—d good thing I did’nt break my Neck!! indeed it would have been a hell of a fall as it is, if it had not been for this Cushion.”

So what happened? How come all these caricatures date from 1819 (and there were dozens and dozens of them) and  within a couple of years they were totally a thing of the past? Because the fashion for riding hobbies could not translate to uneven country roads, and, I suspect, because wearing fashionably tight trousers made for an extremely painful riding position! No one wanted to be seen on “last year’s fad” and the craze disappeared as quickly as it first appeared.