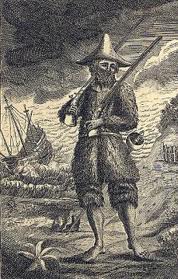 Four year and four months after he was abandoned (at his own request mind you) on an uninhabited island on a remote archipelago off the coast of Chile, Alexander Selkirk looked up and saw a sight he probably had despaired of ever seeing: a sail coming over the horizon. The date was 1st February 1709. As the sailing ship The Duke drew closer, he managed to signal the crew on board, and soon his lonely vigil was over.

The Duke was not the first vessel to have visited the island since Selkirk’s spell as a castaway began – twice, Spanish ships had called to the island, but Selkirk remained in hiding since he knew that he would be killed if he was sighted. He was after all a privateer who had preyed on Spanish vessels in the area for some years. 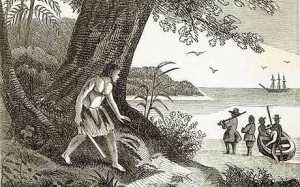 Born in 1676 in Scotland, the seventh son of a cobbler and tanner, he went to sea and in 1703 joined up with William Dampier, a famous buccaneer/privateer of the time. He was made sailing master on board the galley Cinque Ports under the command of the captain, one Thomas Stradling (with whom Dampier had fallen out).

The Cinque Ports had called in at the remote island in 1704 to take on fresh water and any other provisions such as fresh fruit which might be had. Selkirk had by now become a thorn in the captain’s side . Selkirk kept banging on about how unsafe the vessel was, and apparently went so far as to see if others would join him in his quest to be left ashore. Stradling headed down the mutiny but granted Selkirk his request to be allowed to stay behind. All he had brought ashore with him was a musket, gunpowder, carpenter’s tools, a knife, a Bible, some clothing and rope. He was given enough quince marmalade and cheese to provide just one day’s worth of sustenance, but he was confident that a rescue vessel would be ‘ just around the corner’….only it wasn’t!

Arguably, Selkirk made the right call since the storm-damaged Cinque Ports never did make it back to England and most of the crew perished.  The Captain and seven crew members escaped drowning when the ship foundered, and they were picked up by rescuers only to be put in a Peruvian jail and left to rot. But for Selkirk a terrifying and lonely vigil was about to begin. Luckily for him he was a practical man, good with his hands, and fleet of foot. This enabled him to hunt and kill feral goats which had been left on the island by earlier sea-farers, and to fashion clothing out of their hides using skills learned from his shoe-making father. A nail for a needle, an ability to collect shellfish, a penchant for wild berries, a few goats for company, what more could a man want?

The Duke was under the command of Woodes Rogers, who termed Selkirk ‘Governor’ of his island, promoted him in due course to mate, and gave him command of one of his ships. Later, Rogers was to write  ‘A cruising voyage round the world: first to the South-Sea, thence to the East-Indies, and homewards by the Cape of Good Hope’ – it was published in 1712 and included an account of Selkirk’s ordeal.

Selkirk returned briefly to his home town of Lower Largo in Fife  1717, and it must have been one huge shock for his family, who had long since presumed him dead when he walked into the kirk where they were worshiping – and him in all his lace and finery! He apparently  stayed long enough to persuade a 16-year-old dairymaid to elope with him to London on the promise of marriage.  They never wed and indeed Selkirk decided to go to sea again within weeks of reaching the capital. Eventually he married a widow in Plymouth, and died on board the Royal Navy ship Weymouth in 1721, probably of yellow fever. He was buried at sea off the west coast of Africa.

His exploits as a marooned sailor inspired the wriitng of both Robinson Crusoe and Gulliver’s Travels.