I rather like this print, published by Henry Kingsbury in 1787, and which appears on the Lewis Walpole Library website: 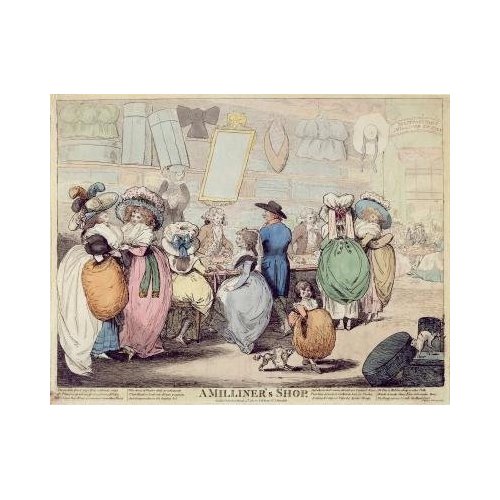 It is entitled A Milliner’s Shop and is a dig at the miserliness of the Royal family  – suggesting that the King (George III) and his wife Queen Charlotte go shopping in Windsor with their entourage of Royal Princesses, and then haggle over the pennies charged by the local tradesmen. The verses underneath end with the lines

“And why in Gods name should not Queens and Kings

purchase a comb or corkscrew; Lace for cloaks,

Edging for Caps, or tape for apron-strings

Or pins or Bobbin, cheap as other folks?

Farthings are not beneath the Royal Care!”

In a way nothing has changed – look at the  fuss made by the British Press if a member of the Royal family pops in to order a take-away pizza. We like to blame our royals for being extravagant (“Air Miles Andy”) but we also like to ridicule them if they appear less than ‘regal’ in their everyday actions. George III was often mocked for his miserliness because it was in such marked contrast to the wildly opulent lifestyle of his son, the future Prince Regent.

Today’s post is a taster – a group of engravings by 18th Century artist John Collier, about whom I will do a blog shortly.

Suffice to say he lived between 1708 and 1786, dying just before the huge popularity of caricatures towards the end of the century. He used the nom de plume Tim Bobbin and amongst other things he did a delightful series on going to the dentist. For some obscure reason my wife’s niece, who runs a splendid dental practice in Exeter, chooses not to line her waiting room with prints of these! 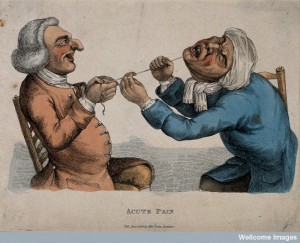 The first, entitled Acute Pain shows a gleeful person inflicting pain on the unfortunate guy with a rotten tooth, extracting it with a piece of string.

Here are two oil on board paintings, described as being “after John Collier” in each case showing a Blacksmith using a pair of pliers to pull  a tooth from an un-lovely patient (victim?). 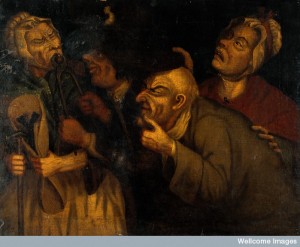 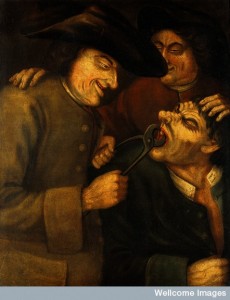 I like this image of a dentist waving a hot coal in the face of the patient to cause him to jerk backwards so as to tug out the tooth. Why waste time on analgesics when you can terrify your patient? 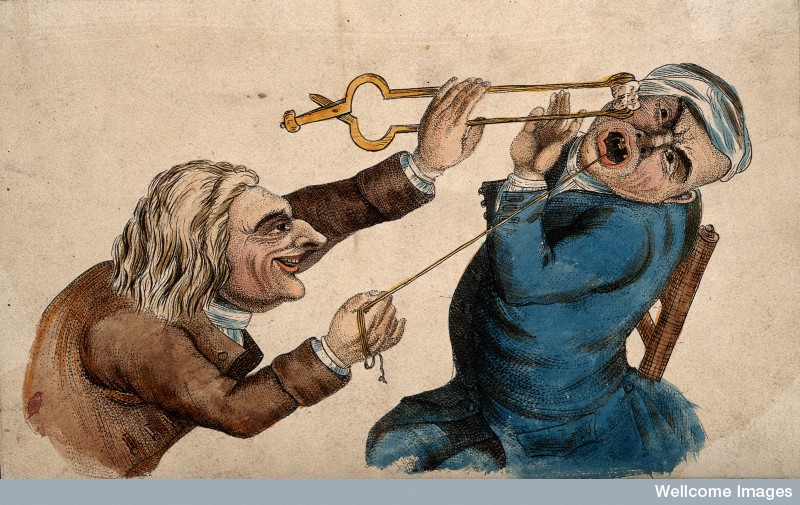 Sadism is even more apparent in this one, showing the dentist with his foot on the patient’s chest so as to get the necessary leverage. Who wouldn’t want to visit a dentist who takes such obvious delight in his trade?! 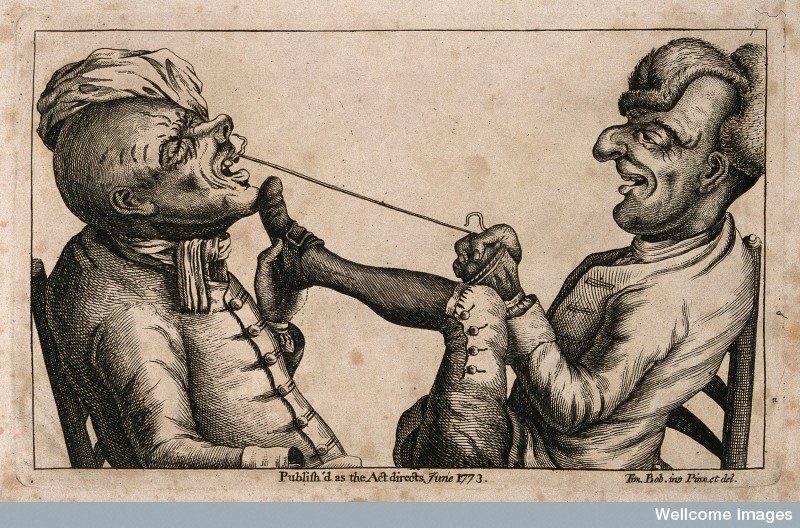 Here is another variation on the plier theme, with the patient’s spouse watching with concerned concentration as the dentist goes about his business. Suddenly, the pain where my filling has come loose no longer seems worth bothering about…. 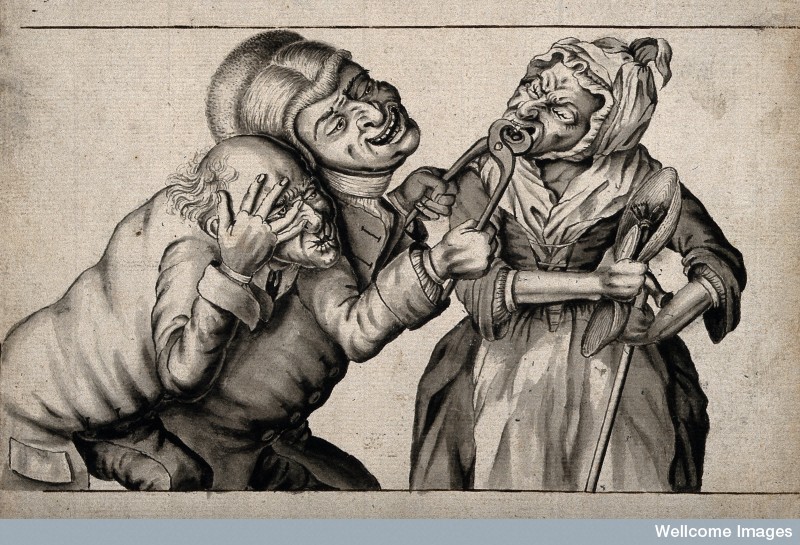 The images are all shown courtesy of the Wellcome Library in London.

In Elizabethan times pins were made in pairs, joined in the centre by their ‘heads’. Even as a pair they were of minimal value – hence the expression “For two pins I would…” 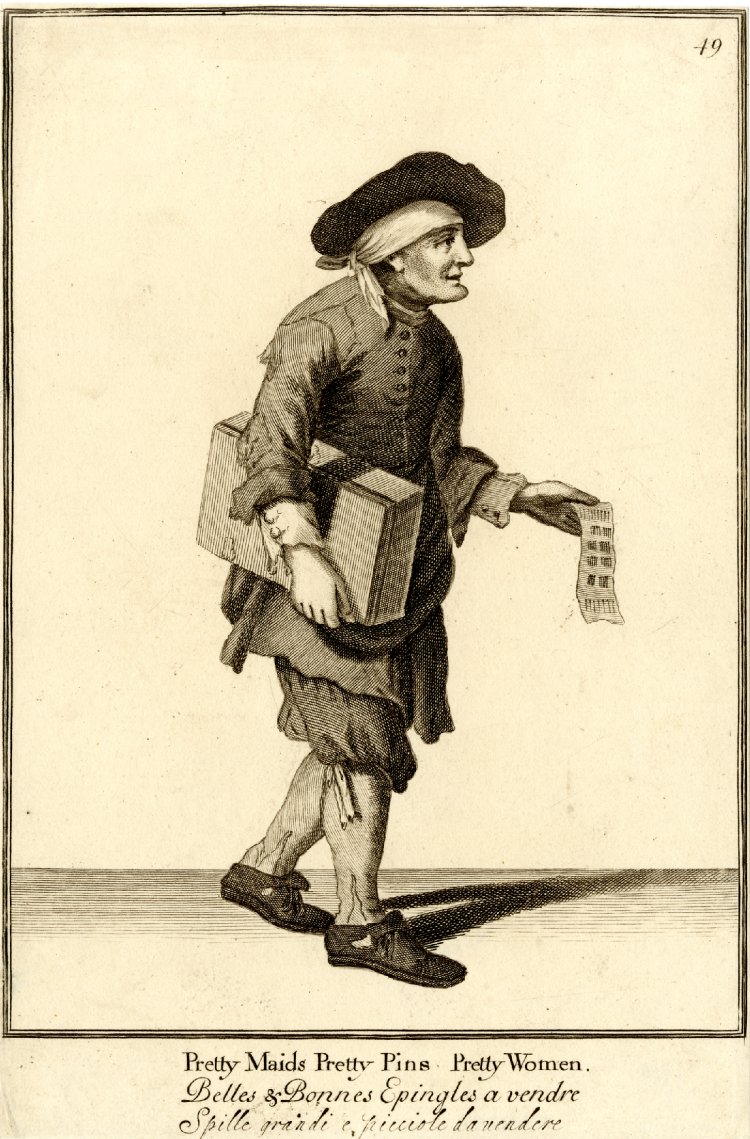 Buy a pair of pins and you would snap them in half to give you two separate items. Which is where the pin man came in, because on his fabric roll he could dispense all manner and sizes of pin. I like this engraving, shown courtesy of the British Museum. It is part of a series entitled “The Cryes of the City of London Drawne after the Life – Pretty maids, pretty pins, pretty women.”

The ever-entertaining Two Nerdy History Girls blogged on pins and needles in 2009 (here). I am indebted to them for this image of a replica set of 18th Century pins, complete with a facsimile of the packet used by Messrs Henry Hales of 197 Borough High Street, Whitechapel.

The problem faced by the ‘pretty woman’ who bought the pins was choosing between the brass ones (rust-proof but not really sharp-pointed) or steel (which carried an excellent point but was prone to rust, discolouring the fabric) Either way, a thimble was essential!

Thimbles have been around for many centuries, but really took off  in the 1690’s when a Dutchman called John Lofting opened a thimble factory in Islington. Later, he expanded the business and moved out to Buckinghamshire, where, if Wikipedia is to be believed, his factory could churn out two million thimbles a year. Subsequently Birmingham evolved as the centre of production. Early examples tend to be of thicker metal and have a tall shape with a markedly rounded top. Later Victorian examples are thinner and less domed. 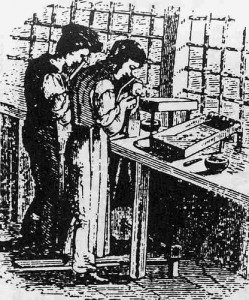 Mechanisation meant that by the end of the Georgian period pins were being manufactured in their millions. It was still repetitive work. Men (and boys) would make the shank. Women, known as headers, would then select a handful of shanks and on the head of each would place a tiny ball made from compacted metal wire. Each would be placed separately under the hammer, which would be operated by a foot-treadle.

Each individual pin had to be be sharpened by grinding (man’s work!). By the 1840’s the average wage for a female header was half a crown a week (2/6d) and for that she had to put in a twelve hour day…. yes you’ve got it, it really was pin money!

Since posting this blog I received a comment from Nick Coleman, who originally came from Dorset and he reminds me of the old saying “see a pin and pick it up, all the day you’ll have good luck”. He also sent me some lovely illustrations of a packet of gold-headed Victorian pins in his collection, which I will try and add to this post once I have resolved what WordPress tell me are “security issues”.

His pins were apparently manufactured by B.Lowe of Birmingham and retailed by a jeweller named B.Woodhill & Sons, and they really are a cut above your “normal” pins!

Today marks the death in 1795 of a man few people will have heard of, but whose work in selective breeding of farm animals in the Eighteenth Century changed ‘life down on the farm’ forever, leading eventually to Darwin’s theories of evolution and, more recently, to experiments with genetic engineering and artificial insemination. 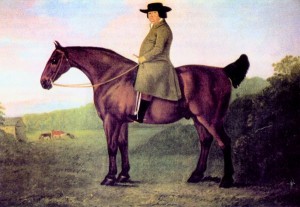 Back in the 1700’s there had been little work done to improve livestock by controlled breeding. The young Bakewell was brought up at Dishley Grange near Loughborough, and he went to study agriculture in Ireland and on the continent, particularly in Holland. His father held some 440 acres of Leicestershire farmland, a quarter of which was arable and the rest used for stock-rearing. When his father died in 1760 Robert was 35. He set about improving the arable land, following the example of others by introducing irrigation, experimenting with crop rotation and fertilizing the land. He diverted rivers and constructed canals to flood the fields, and set up experimental plots to test different manure and flooding methods. This led to earlier grass production in the Spring, meaning that cattle could be grazed and fattened earlier in the year than was previously possible.

But it was with livestock selection that he became a true pioneer. Up until then there were all sorts of geographical distinctions between breeds – a different type of sheep, for instance, was found in Wales compared with those in the Yorkshire Dales. The differences were accidental in the sense that no-one had consciously bred them to be different, but their isolation from each other meant that characteristics became more marked and distinct. This intrigued Bakewell, who wondered whether these characteristics could be bred in, to produce animals with particular features such as longer wool, heavier carcasses etc. He separated the males and females so that breeding was no longer random. By introducing specific males to particular females he was able to monitor and selectively breed different varieties in a system he called ‘in and in’. All this was done without any knowledge of modern genetics – it was simply ‘trial and error’. And of course, in-breeding can emphasise bad qualities as well as good features, so Mr Bakewell would needed to have been meticulous in checking his new-born lambs.

The New Dishley ram and ewe.

News of his successes in improving livestock quickly spread. Arthur Young, an agricultural journalist, visited the Dishley Grange farm ten years after the experiments started, saying: “All his cattle are as fat as bears, yet his land is no better than his neighbours.”

His most influential breeding programme was with sheep. The Lincoln Longwool was developed to give large, yet fine-boned sheep, with long, high quality wool. It was in turn used to develop a subsequent breed, named the New (or Dishley) Leicester. The New Leicester had good quality fleece and fatty fore quarters, in keeping with the prevailing taste for fatty shoulder mutton. The sheep were exported widely, including to Australia and the New World and their bloodlines remain to this day, particularly in Leicester Longwools.

By 1771 Bakewell had some 60 horse, 150 head of cattle and some 400 sheep on his land. He encouraged visitors to come and view his farm, holding ‘tup open days’ and deliberately fanning controversy by dismissing other breeds, such as the Lincoln sheep, as ‘a barrowful of garbage’. His own stock commanded high prices and these caught the imagination of the newspapers and the ‘Dishley craze’ quickly caught on.

In 1783 he founded the Dishley Society to help other farmers improve their livestock. He also pioneered the hiring out of prize rams to farmers in the district, with the result that improved meat and wool production was quickly introduced, and the gene pool was widened.

By now he had moved on to cattle. At the time cattle were primarily used not for their beef but for their cart-pulling qualities i.e. as oxen. Bakewell noticed that the longhorn breeds seemed to put on weight more than others, and to eat less. He took a Westmoreland bull and used it for breeding with longhorn varieties and ended up with the Dishley Longhorn. Thanks in large part to him, the average weight of bulls sold at market more than doubled within eighty years – an amazing achievement, and one which led directly to Britain being able to feed its burgeoning population. (O.K. fillet of beef may not have been on the menu for the urban poor, but higher meat output would certainly have been popular at a time when ‘Roast Beef of Old England’ was a patriotic cry, and when meals were very meat-concentrated, with vegetables and fruit as something of a sideshow at the dinner table).

Not content with sheep and cattle Bakewell selectively bred horses to come up with the Improved Black Carthorse – the forerunner of the Shire horse. He also worked with pigs. 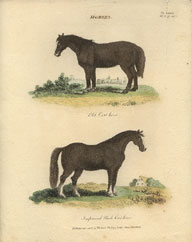 An extract from a contemporary book showing the ‘old horse’ above and Bakewell’s improved cart horse below.

His work is commemorated in the New Dishley Society, founded in 1994 to perpetuate his memory. Their website is at http://www.le.ac.uk/el/newdishley/aims.html and I am grateful to them for the pictures of animals shown in this post.

Finally this blog is dedicated to the beautiful Jo Rogers, whose birthday it is today. She is herself the product of generations of highly selective breeding. Happy birthday, daughter dear!