Coming across this sketch by Thomas Rowlandson from 1808 entitled ‘Picture Sale at Christies’ (courtesy of The Metropolitan Museum ) made me look up the origins of the company. Sotheby’s had been formed way back in 1744, but Christie’s was founded in 1766 by James Christie. He held a sale in his “Great Rooms” on London’s Pall Mall, apparently offering for sale various items including a couple of chamber pots and two pillowcases. The company has come quite a long way since then…

The official company literature states that founder James Christie conducted the first sale on 5 December 1766. However, other sources note that James had been renting auction rooms since 1762, and newspaper advertisements of Christie’s sales dating from 1759 have also been traced.

By 1778, James Christie had moved on to art auctions, and arranged the sale of Sir Robert Walpole’s collection of pictures on behalf of his grandson, George Walpole. The buyer? Catherine the Great of Russia, who forked out £40,000.

In 1795, Christie secured a total of £25,000 for the contents of Sir Joshua Reynolds’ studio, the sale taking place over the course of five days.

James had been born in Perth in 1730. He became a close friend and neighbour of the artist Thomas Gainsborough – the latter painted him in 1778. 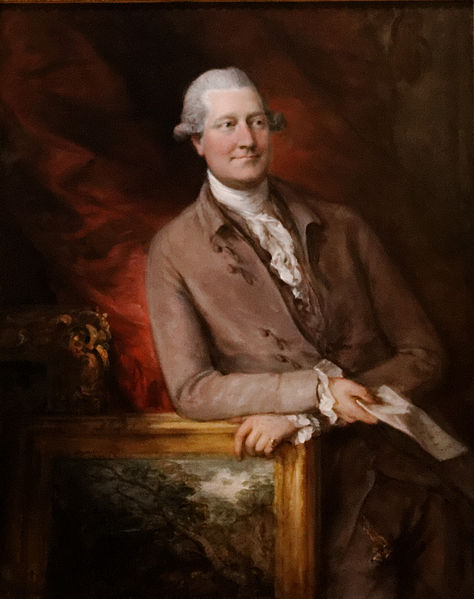 When James died in 1803 the business was taken over by his son, also called James, and twenty years later the business moved to 8 King Street in St James’s, where it remains to this day. 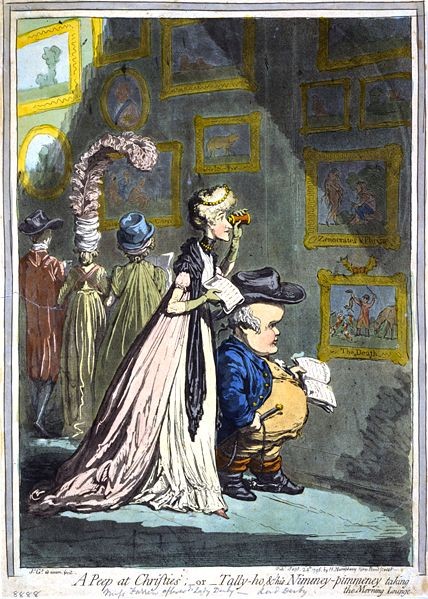 Rowlandson was not the only artist to picture Christie’s auction house. James Gillray gives us ‘A Peep at Christies, or Tally-ho and his Nimmey-Pimmeney taking the Morning Lounge’ (1796), showing caricatures of the willowy actress Elizabeth Farren and the diminutive figure of Lord Derby (a keen huntsman). She gazes head-height at a scene of actors in a classical drama, while  Lord Derby examines a hunting scene at what is head-height for him also!

The National Portrait Gallery has a couple of nice caricatures of the elder Christie, perhaps giving a flavour of his eloquent hyperbole in describing Lots. The first, by an unknown artist, is entitled ‘Eloquence – or the King of Epithets’ 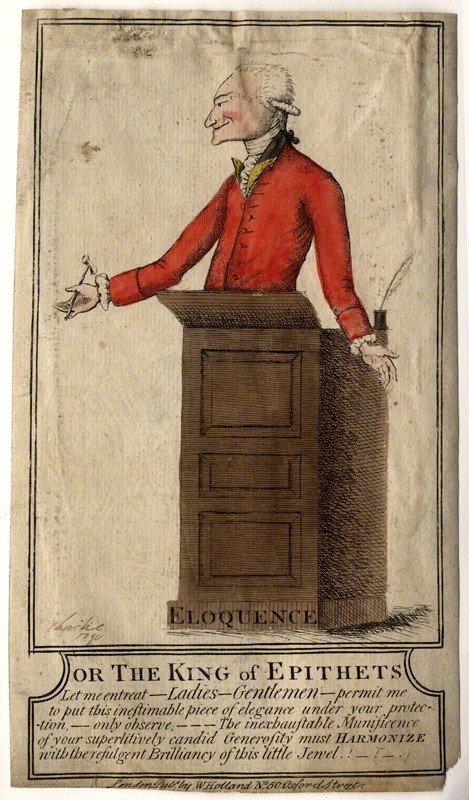 The second caricature is by Robert Dighton and appeared in 1794 and is called The Specious Orator: 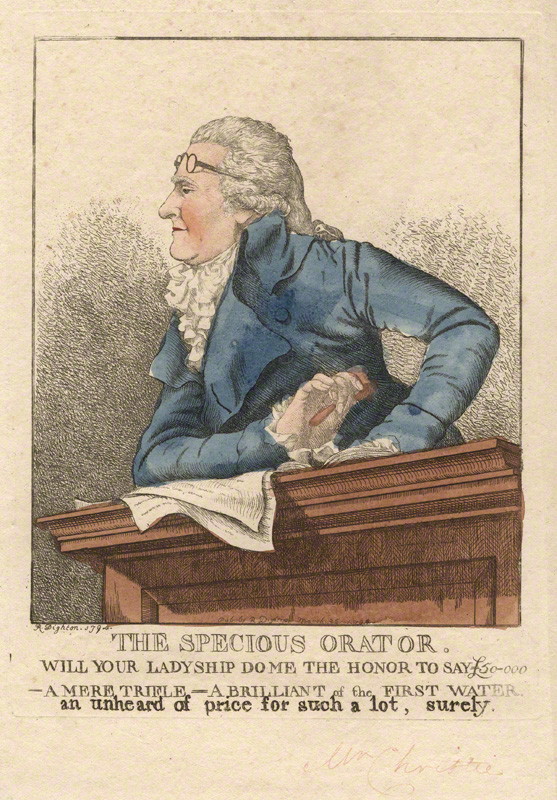 As a twist on men needing to be married off, I bring you a rather lovely caricature from George Woodward, an artist who lived between 1760 and 1809 and who rejoiced in the nick-name of ‘Mustard George’. It is entitled “An advertisement for a husband!” and first appeared in 1803. It is shown courtesy of the excellent Lewis Walpole Library. 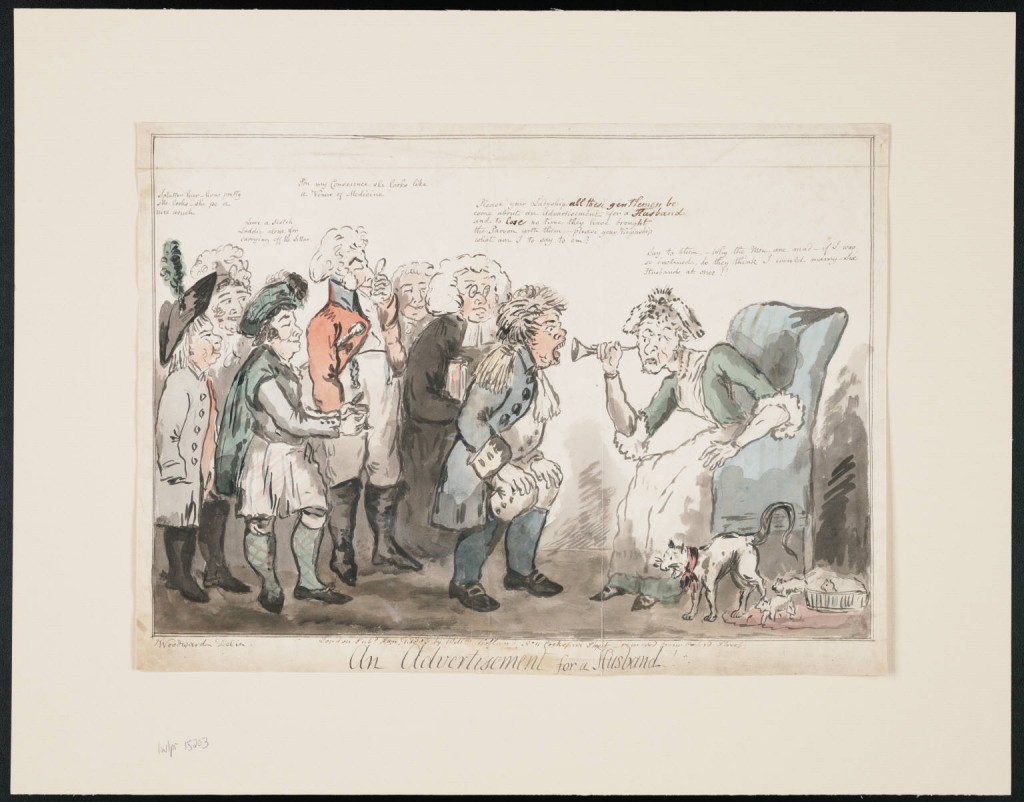 “A footman leads a parson and six prospective suitors that have arrived in response to an advertisement for a husband posted by an ‘old maid’.

The bachelors include a Welshman, a Scotsman, and a doctor that offer flatteries while waiting, “Splutter hur, how pretty she looks, she be a nice wench”, “Leave a Scotch laddie alone for carrying off the sillar”, and “From my conscience, she looks like a Venus of medicine!” respectively. The footman leans forward to shout into the elderly woman’s ear trumpet, “Please your ladyship all these gentlemen be come about an advartisement  for a husband and to lose no time they have brought the Parson with them; please your Virginship what am I to say to ’em?”

The elderly woman responds, “Say to them, why the men are mad, if I was so inclined – do they think I would marry six husbands at once!!” A hissing cat followed by a litter of kittens stand beside the woman’s chair.”

Setting aside the racist reference to the Scot wanting to carry off the silver, or the idea of the Welshman describing her as a nice wench, I rather like the picture of the elegantly dressed  doctor, quizzing glass in hand, peering at the old crone and offering platitudes while appraising the goods. The old bat, complete with chin stubble, was presumably loaded!

Richard Hall was fascinated by extreme weather conditions and loved writing down tittle-tattle from around the country. I like the description of the storm which happened off Lerwick in 1797: 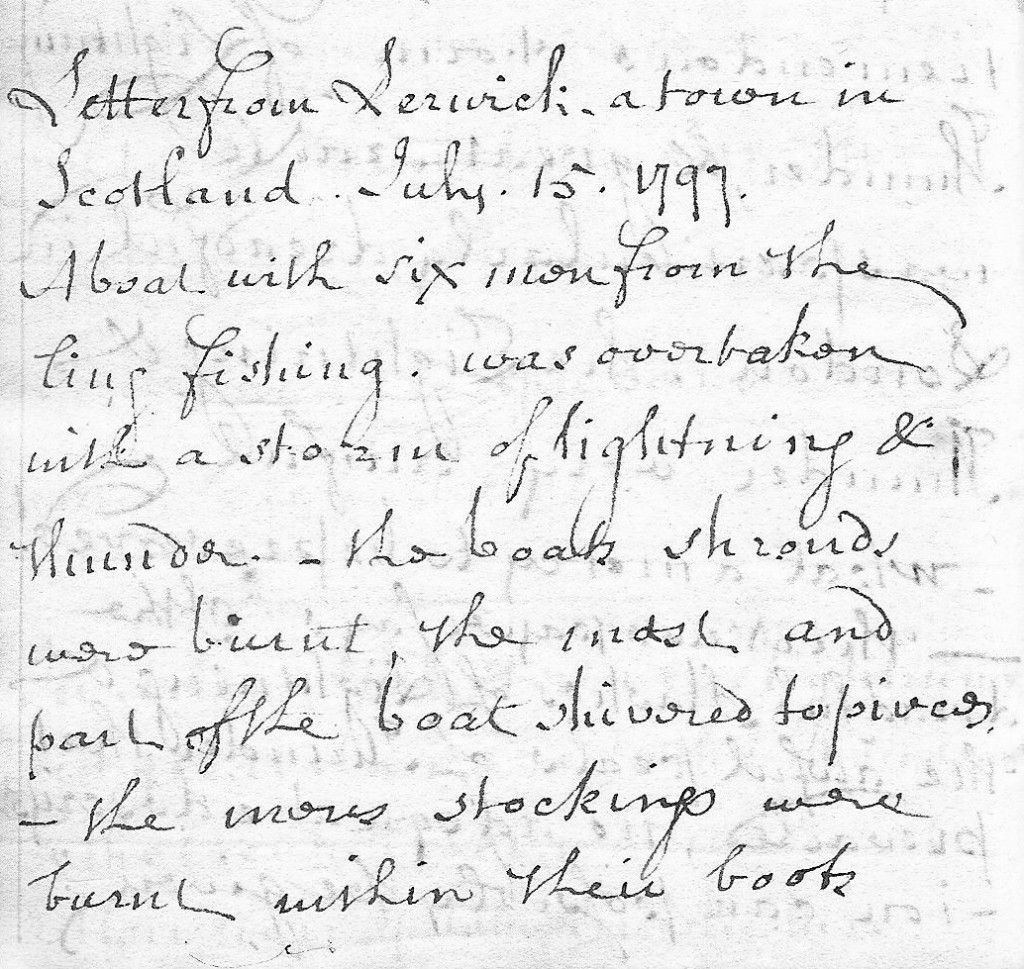 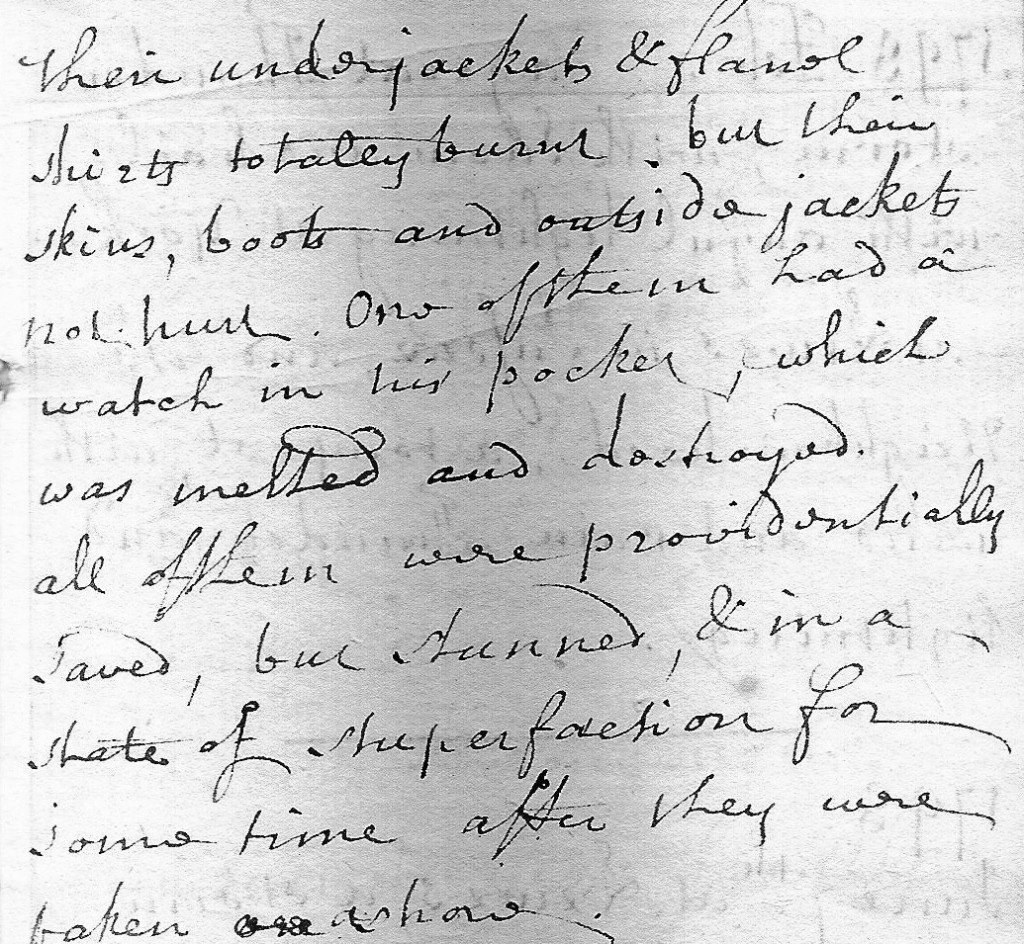 In case your eyesight isn’t up to deciphering the spidery scrawl:

A boat with six men from there, ling fishing,  was overtaken with a storm of lightning & thunder – the boat’s shrouds were burnt, the mast and part of the boat shivered to pieces – the men’s stockings were burnt within their boots, their underjackets and flanel shirts totally burnt, but their skins, boots and outside jackets not hurt. One of them had a watch in his pocket, which was melted and destroyed. All of them were providentially saved, but stunned & in a state of stupefaction for some time after they were taken ashore.”

Two days later a horrendous storm struck London: “Very early in the morning a tremendous storm of Lightning and Thunder and great rain. Was particularly dreadful in London. The Lightning & Thunder very awful – what a Mercy to be preserved! The Newspaper says ‘of the dreadful flashes of Lightning & the awful peals of Thunder that prevailed no adequate description can possibly be given’

An interesting caricature from Thomas Rowlandson, dated 1792, setting out English view of revolutionary France.  No sitting on the fence here! 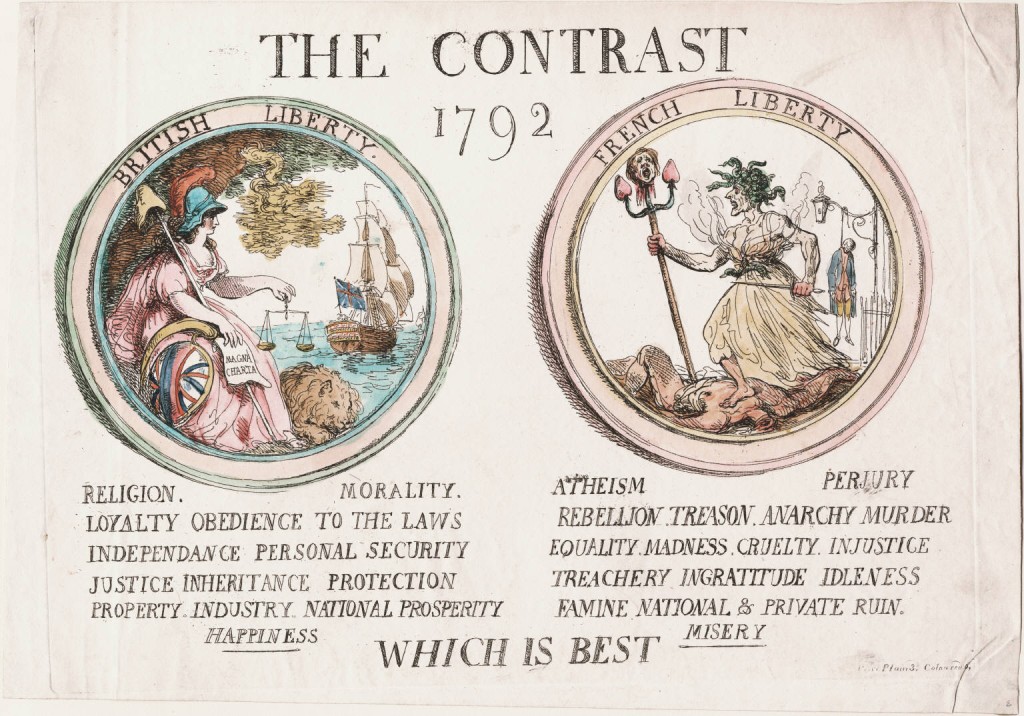 It appears courtesy of the Lewis Walpole site. Their explanation of the scene:

“Two medallions side-by-side contrast British Liberty and French Liberty. On the
left Britannia is seated under a large oak looking out to sea at a ship under
full sail. At her feet lies the British lion, in her hands the scales of justice
and a copy of the Magna Charta. On the right French Liberty, Medusa-like,
tramples on a decapitated body, as she holds a trident impaled with a head and
two hearts. In the background a body hangs from a street lamp shaped like a
gibbet. Beneath the images, a list of contrasting virtues and vices of the two
countries. ”

That’s what I like about the British – we are always magnanimous about our French cousins, always balanced, always fair-minded!

My apologies to friends on the other side of the Atlantic, but believe it or not other things have happened in the world on 4th July, apart from the celebration of a terrorist uprising in the American colonies….

My ancestor’s diary for July 4, 1799 shows that Richard nearly choked to death on  a piece of bread and butter which stuck in his throat ‘while drinking coffee in the afternoon’.

I wouldn’t mind betting that for a brief moment  a thought flashed through his mind of young Nancy, his niece. She too had a hot drink in a cup – in her case milk. She was only seven years old and had gone up to bed on her own with her cup of milk and a crust of bread. Dipping the bread in the milk she inadvertently picked up the skin, scolding hot, which had formed on the surface of the milk. As she swallowed the bread, she choked. By the time her parents rushed upstairs, Nancy was dead.

So, just for a change, instead of celebrating Independence in some far off place, I will give thanks for the Providence which spared Richard to live another day. I think it is important to keep these things in perspective….

Oh alright, just one bit of memorabilia of those events  a few centuries back – a picture of the statue of Our Dear King George III being unceremoniously pulled down off his plinth, New York, July 4th  1776. 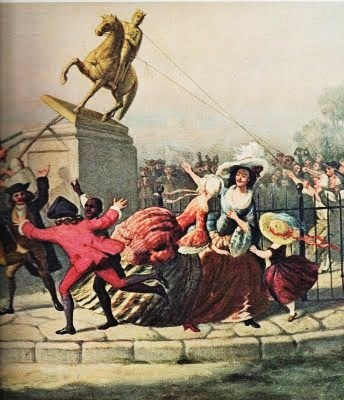 Richard Hall, my ancestor, died on 2nd July 1801  after a short illness. He had been fine when he started off from Bourton on the Water on 17th June, heading for London by coach, but was taken ill at Witney and was forced to return home. Doctors were called; his children by his first marriage to whom he had hardly spoken for over twenty years (because of a feud over their inheritance) were sent for and duly arrived. He lingered for a fortnight before croaking his last at six in the morning. He was 72, and apparently his last words were uttered when he sat up in bed and asked “Am I in Heaven yet?” On being informed that his request was somewhat premature he sank back and breathed his last. I suspect his final thought must have been one of great disappointment!

He had always been something of a hypochondriac, and I still have many of his prescriptions for indigestion, bad nerves, and so on. To mark his passing I thought I would share this fine print drawn, I believe, by Richard Newton but engraved by Rowlandson and published in 1813,  just a dozen years after Richard passed on: 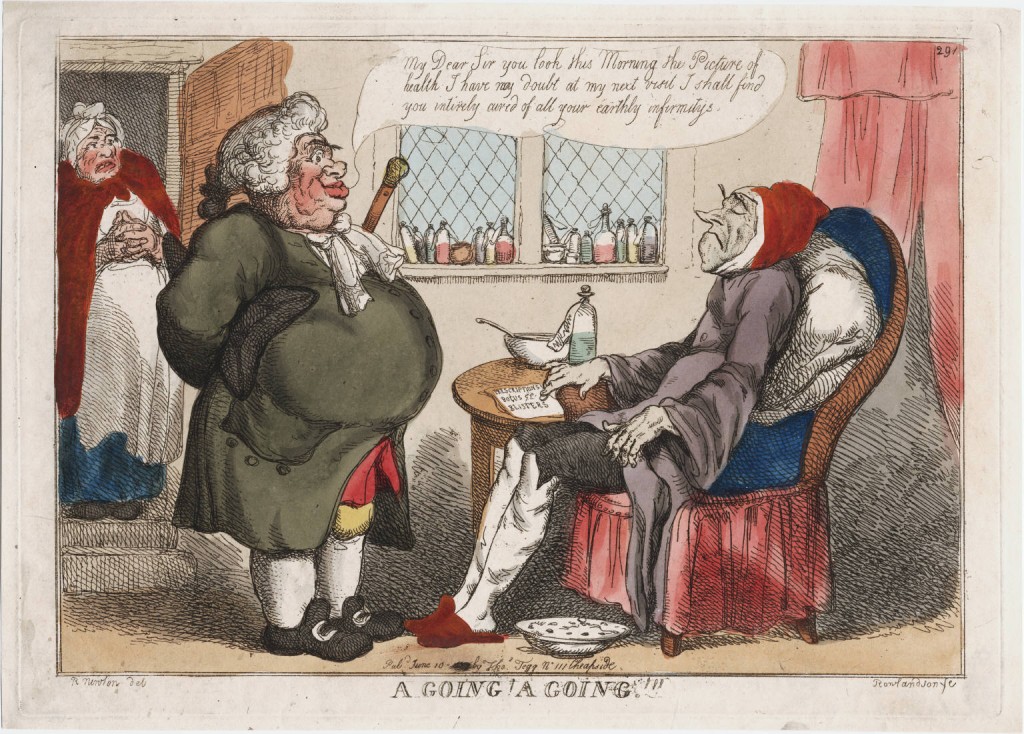 Entitled ‘ A Going! A Going!!!’  it shows a rather well-fed doctor greeting his patient, who clearly is on the point of death. The patient is surrounded by medicine bottles of every hue and description, and the medic booms out ” My Dear Sir, you look this morning the Picture of Health. I have no doubt at my next visit I shall find you entirely cured of all your earthly infirmitys”

And so it was for poor Richard. All that remained was for his widow to parcel up his papers, his diaries, his jottings and his recipes, and place them in the bottom of the trunk where they have remained ever since… 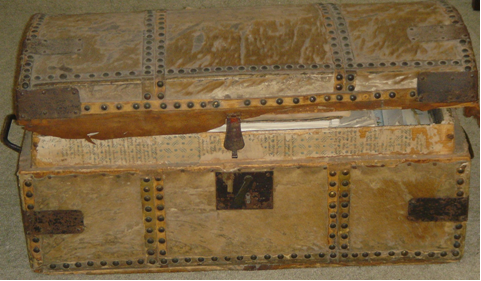 And finally, another couple of caricatures by my old favourite Richard Newton: “Giving up the ghost, or one too many”. I like the way that the corpse is shown with its toes all curled, while the undertaker arrives with his coffin strapped across his forehead, and the Doctor, exhausted from his labours, takes a kip in the armchair… 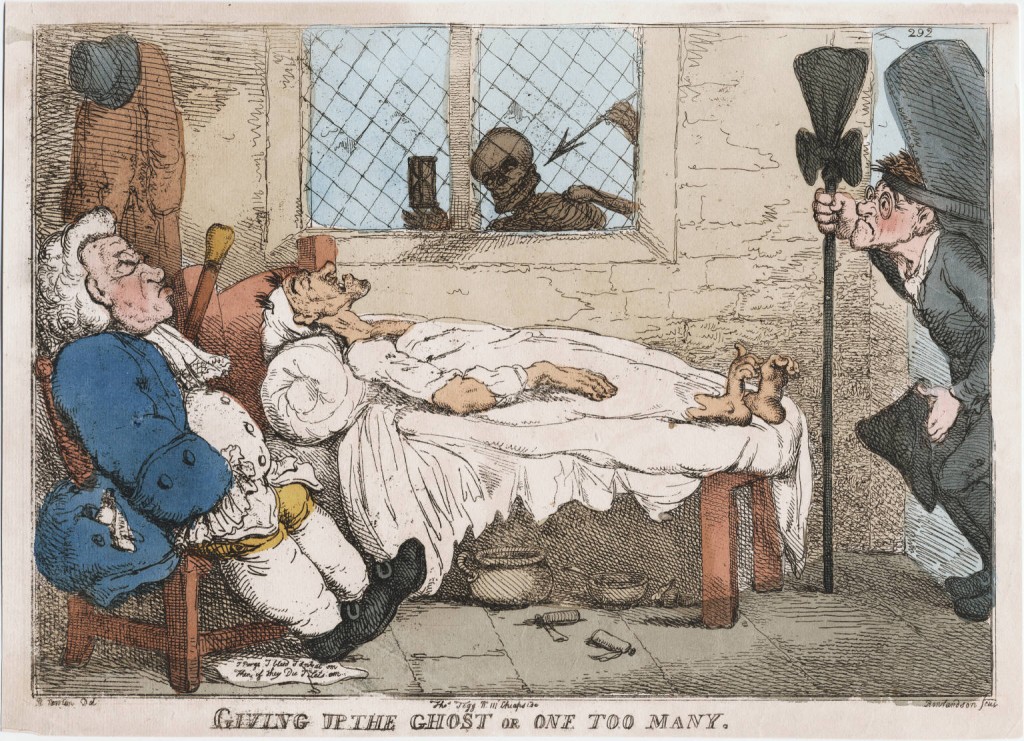 And another Newton one from 1794 called “Undertakers in at the Death” showing the three undertakers rushing in to the room just as Death is about to launch its fatal arrow. It appears courtesy of the British Museum. 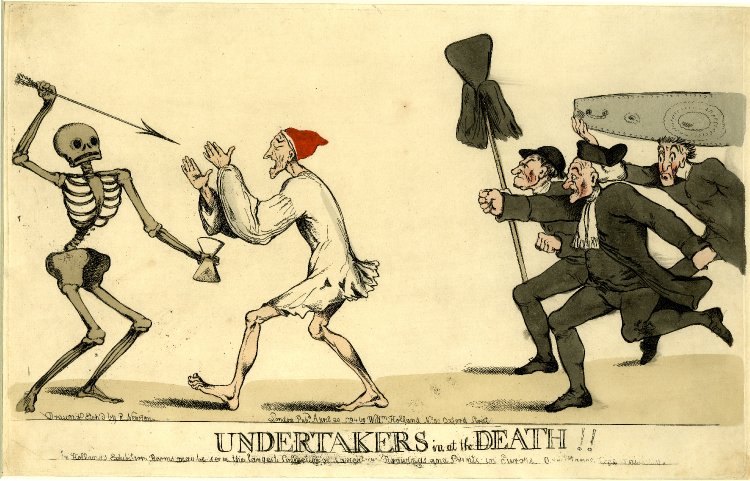 O.K. I said ‘finally’, but then I decided to have another final one: I have always been a sucker for the simple pen and ink drawings of Thomas Rowlandson. This one is entitled “A Death-Bed Scene” and is shown courtesy of the Yale Centre for British Art.