The days when The Laundry was to be carried out obviously loomed large in the Hall calendar. Small wonder when you consider the palaver, involving the servants from before dawn, and lasting all day, as they fetched and heated water, rubbed and scrubbed, rinsed and squeezed and so on all day and, as per the diary entry of July 9th and 10th, sometimes for two whole days. It was only when I read the excellent article by Maria Grace on the English Historical Fiction Authors blog (details at the end of this post) that I appreciated just how complicated  it all was.

Mind you, cleanliness was never next to godliness in my God-fearing family: indeed to do the laundry more often than four times a year would have been unthinkable, as shown by the fact that from July there was a gap of four months until Wash Day on 13th November, and that lasted through until the end of March, when presumably a spring-clean was somewhat overdue! 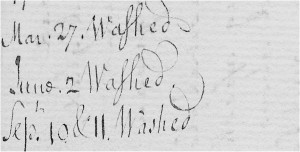 I know from Richard’s diary that he only took a bath every couple of months so it is surprising to see how much he spent on soap – it was obviously a very expensive commodity if it was only brought out for high days and holidays. His accounts show an expenditure of just over a pound per annum on soap (equivalent to maybe 120 dollars nowadays) – roughly 25%  of what he spent each year on light i.e. candles.

That then  is the background to this rather nice cartoon from the Lewis Walpole Library Site entitled The Steam Washing Company, because it gives some idea of the frenetic activity on laundry day. And no, I have no idea why it shows the Archbishop washing out his smalls, or what the Scotsman in his tartan is washing (because presumably he didn’t wear smalls…). On the right a woman is adding Dolly Blue as a whitener. 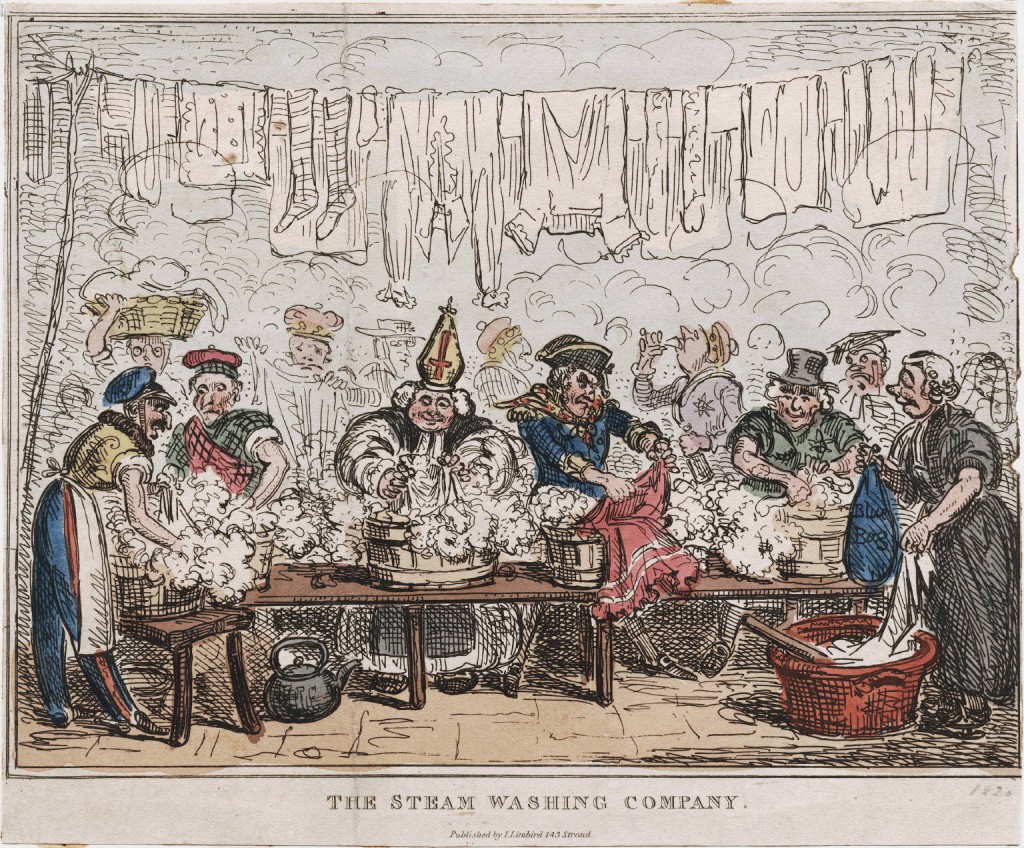 A rather more rural view of the same activity, and with a lot more leg but rather less steam, is shown in Scotch Washing (also from Lewis Walpole). The girls are treading the laundry in wash tubs, while on the right a girl takes time off from beating the linen with a paddle or oar, (presumably to loosen the grime and rinse away the dirt in the stream) in order to give a soaking to a passer-by . 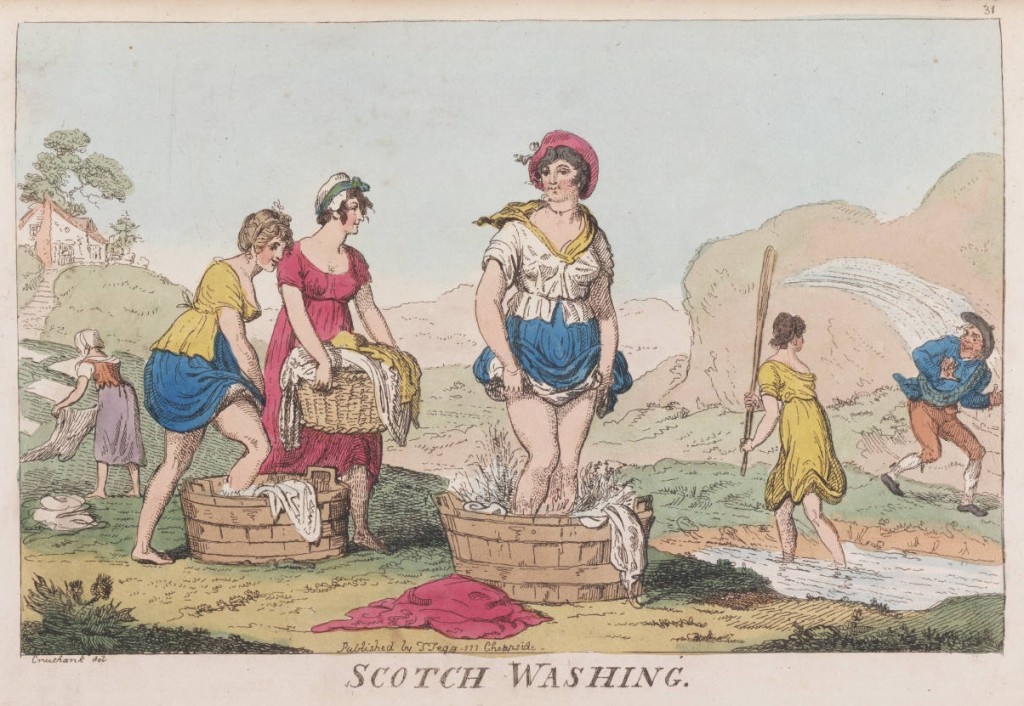 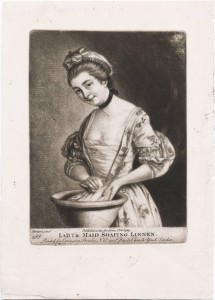 –  all very genteel, but make no mistake, washing was a chore, albeit one which gave employment to an army of servants. Substantially the same picture is shown in the image on the left, but with a chair supporting the washbasin. It was painted by Henry Robert Morland and was called “Woman Doing Laundry”. 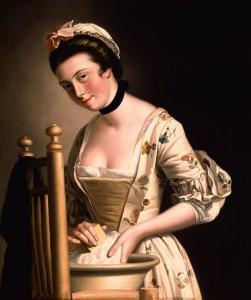 Just think of the mayhem which must have been caused when, horror of horrors, a machine came along to eliminate those washday blues! Or not as the case may be…In January 1750 the Gentleman’s Magazine carried this drawing of what it describes as a Yorkshire Maiden.

Attempts had been made for some time to mechanise the washing and drying process and by the end of the century there were advertisements such as this one for Beethams Royal Patent Washing Mill (“If economy be necessary, or cleanliness desirable, this is the way to obtain it”) and below it the Patent Chain Net (“for Wringing, facilitates their almost immediate Drying”). 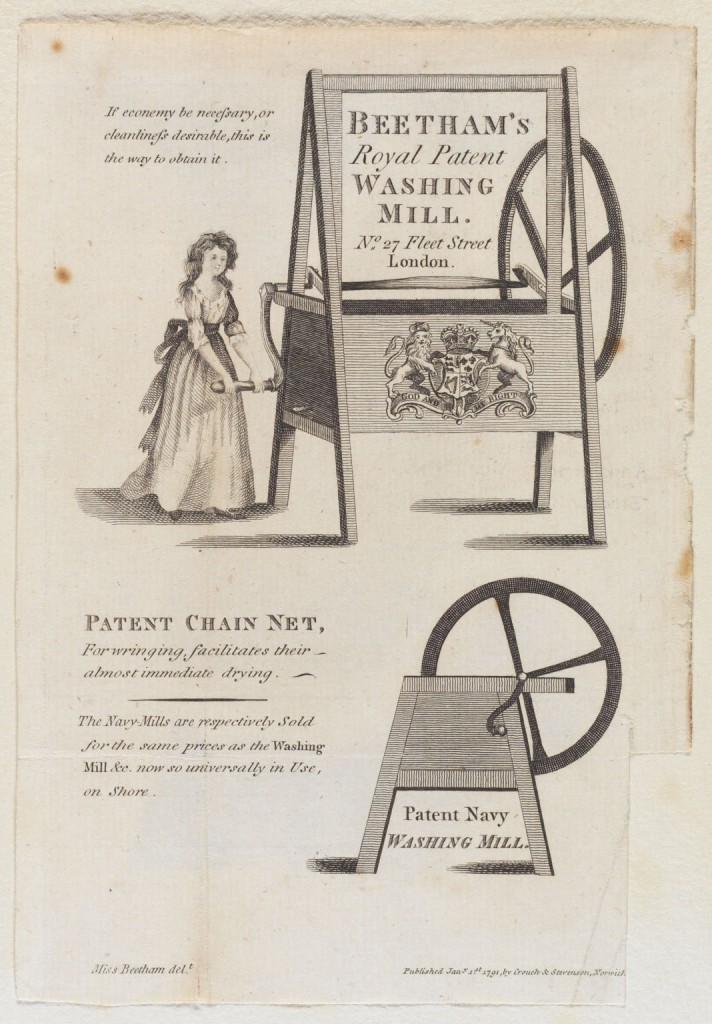 It seems as if everybody tried to get in on the act with their own clothes washing machinery – so here we have a trade card for a Carpenter, General Joiner, and a ‘decent performing undertaker’ (so much better than the indecent variety!) who also doubles up as a maker of “washing engines”. 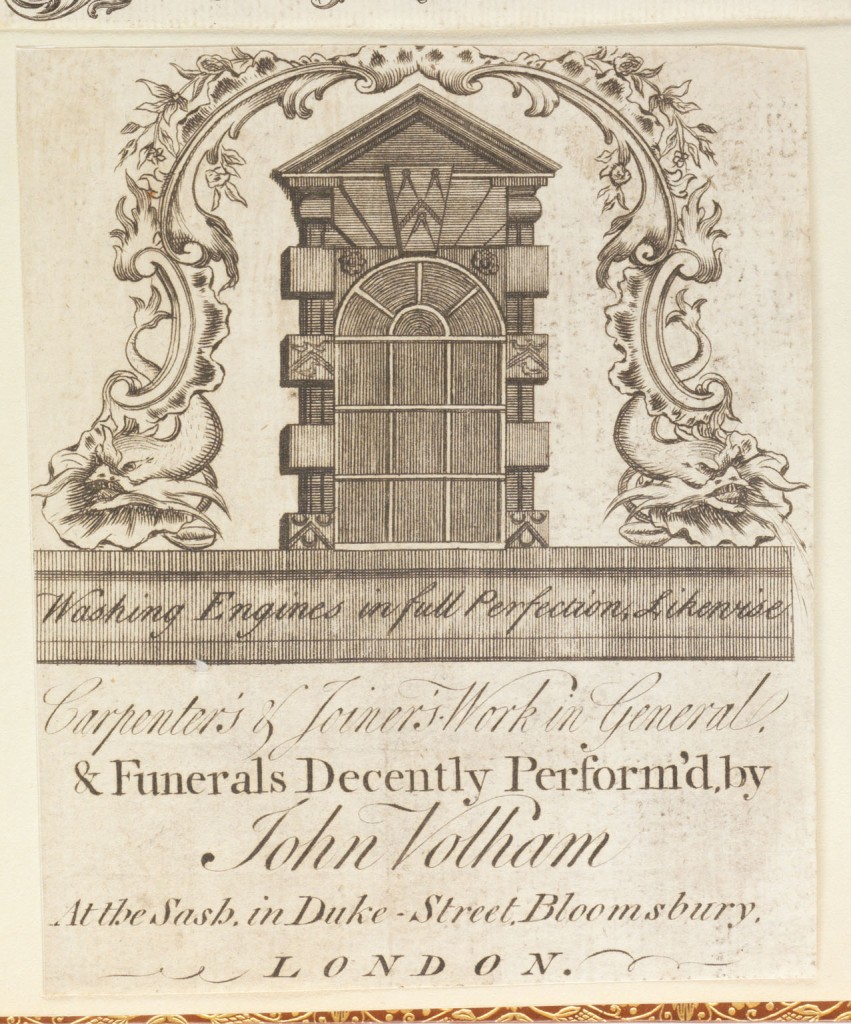 Again, I am grateful to the Lewis Walpole site for all the images.

P.S. The article on washing appears at the EHFA site here.

The Bank of England recently proposed a consultation period for the introduction of banknotes made out of plastic, rather than paper. I am well aware that many countries have already discarded their rather nasty, crumpled, grubby, germ-ridden notes made of paper – Canada and Australia come to mind, but these are Johnny-come-lately countries, and “why should we follow them?” I hear people say.

Scare-mongerers point out that if you fold a plastic note and put it in your back pocket it will unfold, and may spring out and fall to the ground. (I mean, what person with any sense keeps notes folded in a back pocket? A fool and his money deserve to be parted….)

The fact is: we hate change and will always grumble when change is forced upon us. But just think what a major thing it must have been when banknotes started to be introduced in comparatively low denomination notes in the 1790’s, when people had previously always dealt with gold, silver and copper  and where the coin’s intrinsic value was the same as its face value. I mean: “I promise to pay…. ” signed by the Director of the Bank of England is not the same as having the value in your hand, is it?

The Bank of England’s own website (which includes the image of the One pound note dated 1805 shown at the start of this blog) gives the history:

“In 1759, gold shortages caused by the Seven Years War forced the Bank to issue a £10 note for the first time. The first £5 notes followed in 1793 at the start of the war against Revolutionary France. This remained the lowest denomination until 1797, when a series of runs on the Bank, caused by the uncertainty of the war, drained its bullion reserve to the point where it was forced to stop paying out gold for its notes. Instead, it issued £1 and £2 notes. The Restriction Period, as it was known, lasted until 1821 after which gold sovereigns took the place of the £1 and £2 notes. The Restriction Period prompted the Irish playwright and MP, Richard Brinsley Sheridan, to refer angrily to the Bank as “… an elderly lady in the City”. This was quickly changed by cartoonist, James Gillray, to the Old Lady of Threadneedle Street, a name that has stuck ever since.” 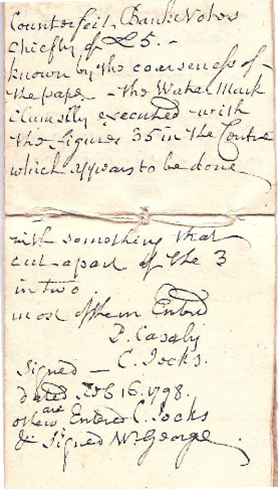 Ancestor Richard Hall was well aware of the risk of counterfeit notes – as in this entry in his Journal. Even at this early stage, the paper itself was hard to replicate, and the water mark gave forgers all sorts of problems. But I suspect that in the minds of the general public the problem with the notes was inextricably linked to the war with France – it was those darned Frenchies who were causing the problems. The Bank of England refer to Gillray so I looked out one of his caricatures, dating from March 1797. It appears courtesy of the National Portrait Gallery and  is entitled “Bank-notes, – paper-money, – French-alarmists, – o, the devil, the devil! – ah! poor John Bull!!!” and features William Pitt, standing behind the counter, handing out wads of money while Sheridan, Fox and Lord Stanhope discuss whether accepting paper in lieu of gold is a good idea.

“Don’t take his notes. Nobody takes notes. They don’t even take my notes any more.”

“I wool take it. A may as well let my Master Billy hold the gold to keep away you Frenchmen, as save it to give it to you, when ye come over, with your damned invasion”.

Fox urges John Bull to decline the notes, with the words “Don’t take his damned paper John, insist upon having gold, to make your peace with the French when they come” 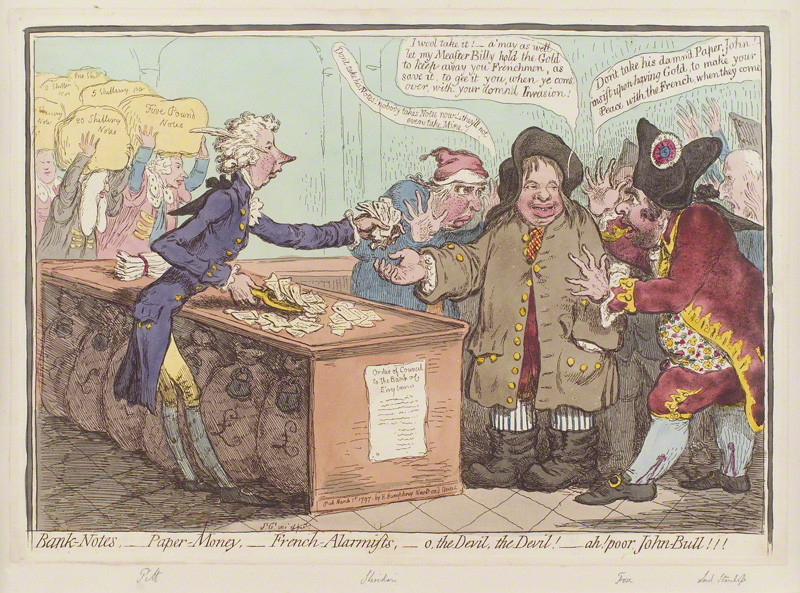 I like the way that both sides claimed “patriotism” as the reason why paper should or should not be accepted. Poor John Bull indeed!

Gillray also showed Pitt in the guise of Midas, spewing forth paper money while clothed in gold. The padlock dangling from his neck reads ‘Power of Securing Public Credit’ and in his hand ‘The Key to Prosperity’.  Pitt may have a body of gold, but he defecates mostly paper onto the  Bank of England, below. The caption underneath explains that Apollo had fixed asses ears to the head of Midas – and although these are half-hidden by a crown, figures lurking amongst the  undergrowth on the left are whispering “Midas has Ears” – i.e. he is an ass.

Nowadays we would have to show George Osborne,the Chancellor, jointly with Mark Carney as Governor of the Bank of England, converting the national wealth into….plastic! 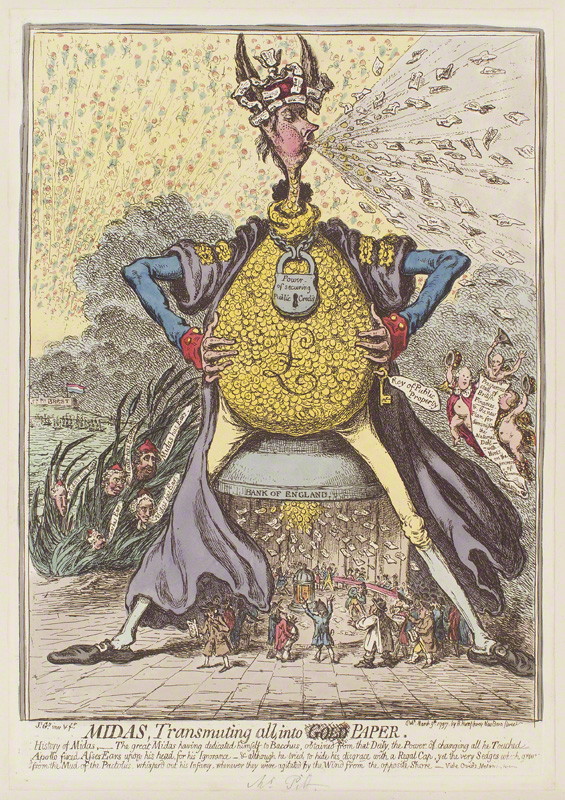