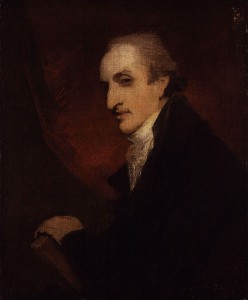 If ever a man deserved the term ‘villain’ rather than ‘hero’  it was William Douglas, Third Earl March and later Fourth Duke of Queensbury. Born in 1725 (four years before my ancestor Richard Hall) he outlived Richard by nine years, dying in 1810. The man was a disgusting old lecher, a rake who never married but who had a penchant for young girls, particularly dark, Italian, ones. He was also a prodigious drinker, a keen follower of horse racing, and an inveterate gambler.

He was 52 when he inherited the dukedom in 1778, his two cousins who were direct in line having predeceased him. Thereafter he became known as ‘Old Q’. Arguably the faults which would have been permitted in a younger man only became notorious with Old Q simply because he never did reform, or repent his wicked ways, or give up debauching young girls. He was nothing if not consistent, right into old age.

By any measure, why hero? Because of the lengths to which he would go to win a bet. Back in 1747 he had been elected to White’s (one of London’s most famous clubs) where a book was kept recording wagers made by members with each other. The entry in the betting book for 18th October 1749 states “Col Waldegrave betts  Ld March fifty guineas that his Lordship does not win the Chaise match. N.B. Ld Anson goes Col Waldegrave halves. Paid”

The actual wager, which became known as the ‘Race against Time’, was to the effect that Lord March could not race a coach and four, carrying a man, over a distance of nineteen miles in one hour. Remember that a four-wheeled carriage was an extremely heavy, cumbersome piece of equipment, and that roads were poorly surfaced. The coaches had no springs – and no tyres – and racing a distance like that was ‘unthinkable’. Well, not for Lord March it wasn´t.

He had already placed a side wager of a thousand guineas on the outcome and set about the task of winning the wager with typical determination, ingenuity and cunning. He examined the terms of the wager most carefully – the conveyance had to carry one man, but there was no mention of it needing a carriage body. He contacted his carriage makers and had them make up a number of carriages frames, stripped down to the absolute basics. They were then tested against each other to find the lightest, fastest, design. So determined was he to lose weight from the contraption that he had the carriage makers use whalebone for the harness and silk for the traces. In all he managed to whittle the total weight down to a mere two and a half hundredweight.

Come the great day (29th August 1750) Lord March was at Newmarket Heath at seven in the morning to see his trusty groom clamber aboard the frame of the carriage. There was no seat, no support, and precious little to hang on to. The start was called and off the horses belted, covering the first four miles in under nine minutes. Indeed they completed the nineteen mile course in just fifty three minutes twenty seven seconds. His Lordship duly collected his winnings…

He was certainly not a man to bet against: on another occasion he wagered that he could cause a letter to travel fifty miles in an hour. That was too tempting for one poor fool, who accepted the challenge and had to watch as Lord March caused the letter to be bound up inside a cricket ball: twenty cricketers were lined up in a specially measured circle and the ball was thrown from one to another, round and round, and the bet was easily won. It always paid to read the small print with Old Q….

Mind you, while he became a member of Brooks as well as Whites, he was black-balled by both Boodles and Almacks. He was however a  member of the infamous Hellfire Club….

On the subject of his love life, he showed a penchant for the Italian opera singer Zampirini, and lavished presents upon her, but also paid for the favours of her fellow-Italians Tondino, Rena and Fagniani (by whom he is known to have had a daughter Maria. Born in 1771 she was left a large inheritance when he died). 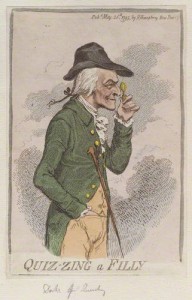 At one stage he decided to pursue Frances Pelham, sister to Lord Pelham. The latter was horrified at the idea of the old goat being paired with his sister and forbade March from coming to the house. Lord March had already bought the adjoining property at 17 Arlington Street, just so as to be near the object of his desires, and March deliberately constructed a bow window so that he could continue to keep tabs on his inamorata – it afforded a view into the house where she lived. By the time Lord Pelham died two years later and Frances was free to marry, March had ‘moved on’ and was living with Rena, his latest ‘squeeze’. He did however apparently propose marriage on no fewer than three occasions to the young Miss Gertrude Vanneck, a neighbour of his in Piccadilly. This was in 1786 (by which time he was already 61) and to his credit the girl’s father declined the fortune which would have gone with his daughter marrying the wealthy duke, and refused to countenance the union.

I am indebted to the Regency Collection for this description of Old Q in his latter years, when he appears to have become a particularly disgusting old letch.

“Towards the end of his life Queensbury made a notable figure about London when he drove out, he always wore  dark green and had long tailed black horses, in winter he would also carry a muff. Two servants were seated behind him and his groom, Jack Radford followed on horseback ready to execute any commissions. As Radford’s commissions were usually taking notes and messages to desirable looking girls that took the duke’s eye he managed to increase his unsavoury reputation. That because of his wealth and unmarried state many women still found him an attractive target only increased the disapproval of society. When not out driving he would sit on the balcony of his house at 138 Piccadilly ogling the passing women and again using Radford to take notes to them. It was here that the poet Leigh Hunt saw him in the early 1800’s and “wondered at the longevity of his dissipation and the prosperity of his worthlessness.” 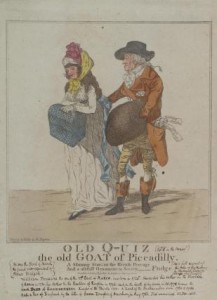 Old Q-uiz, the Old Goat of Piccadilly  by Robert Dighton

By way of post script: Old Q had the slightly strange habit of taking his bath in milk, believing it had great restorative powers. Gallons of milk were needed for the purpose, and for years locals in the area surrounding Piccadilly had an aversion to drinking the stuff, suspecting that his Lordship sold it on after completing his ablutions!

23rd December 1810 saw the old goat of Piccadilly shuffle off this mortal coil, and we remember him on his anniversary, though perhaps more with revulsion than with affection…

It seems as if  fishwives had a rotten reputation two centuries ago – renowned for their foul temper, loud voices, and a willingness to strike out at anyone and anything on the smallest provocation.

Here are a few interesting ones: 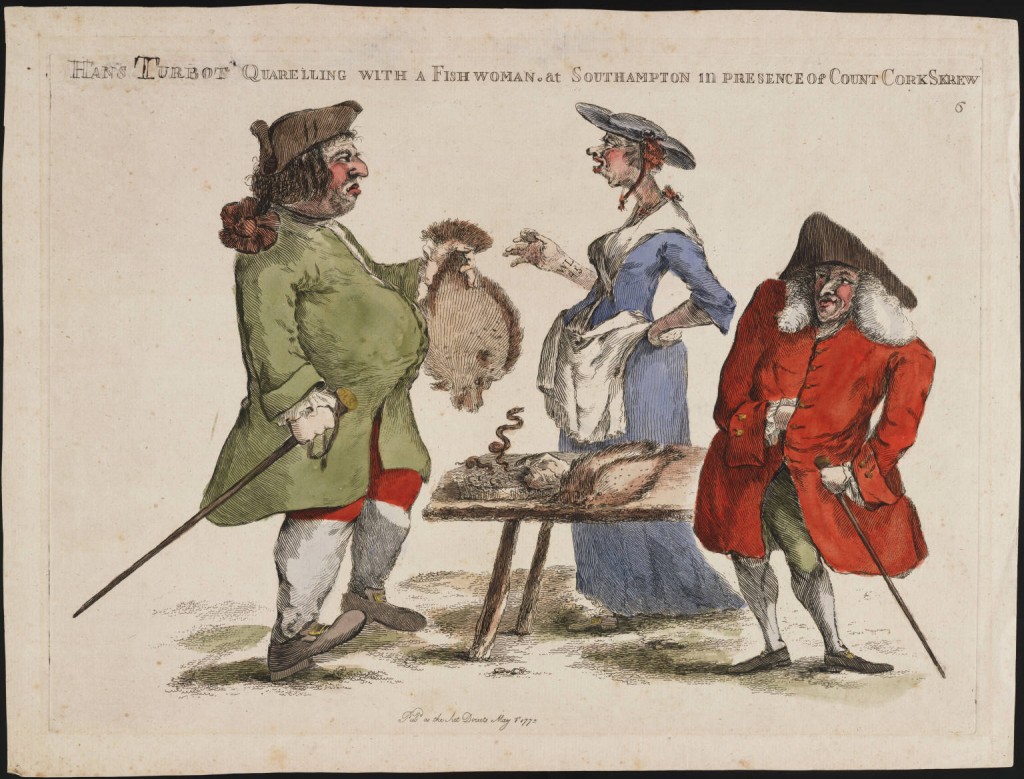 Shown courtesy of the Lewis Walpole site it is in one version described as being “A Member of Parliament quarrelling with a fish woman…” – and in this one as “Hans Turbot quarelling with a fish woman at Southampton in the presence of Count Corkscrew”. It was published in May 1773 and shows the charmless vendor giving as good as she gets from a customer.

Clearly things sometimes got out of hand, as in this one where the fishwife is shown giving a good thrashing to some poor Frenchie who has upset her. Quite why he is shown in ‘bare-faced cheek’, so as to speak, or why someone is attempting to nip the said cheeks with  a lobster, is unclear. 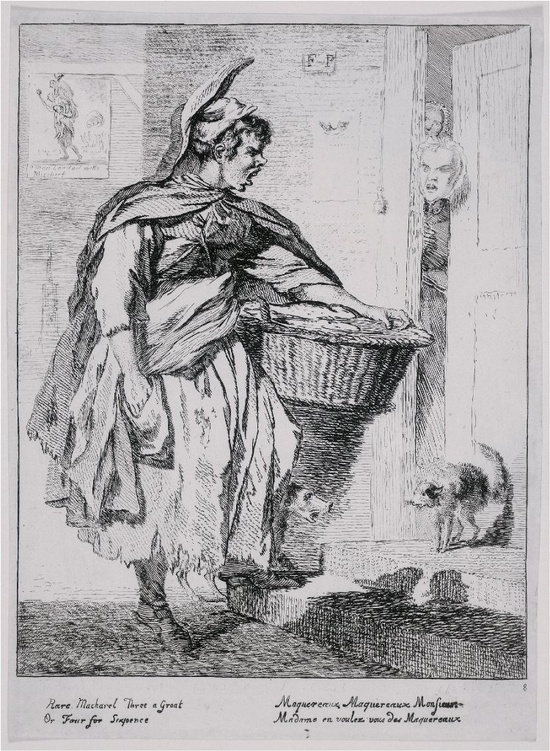 Here is another, shown courtesy of the British Museum, with the bawling fishwife crying her wares “Rare mackerel Three a Groat, or four for sixpence”. (A groat was fourpence). The servants half-opening the door do not seem keen to purchase, and the cat recoils in horror, presumably because the fish are “off” and even the cat will not eat them. 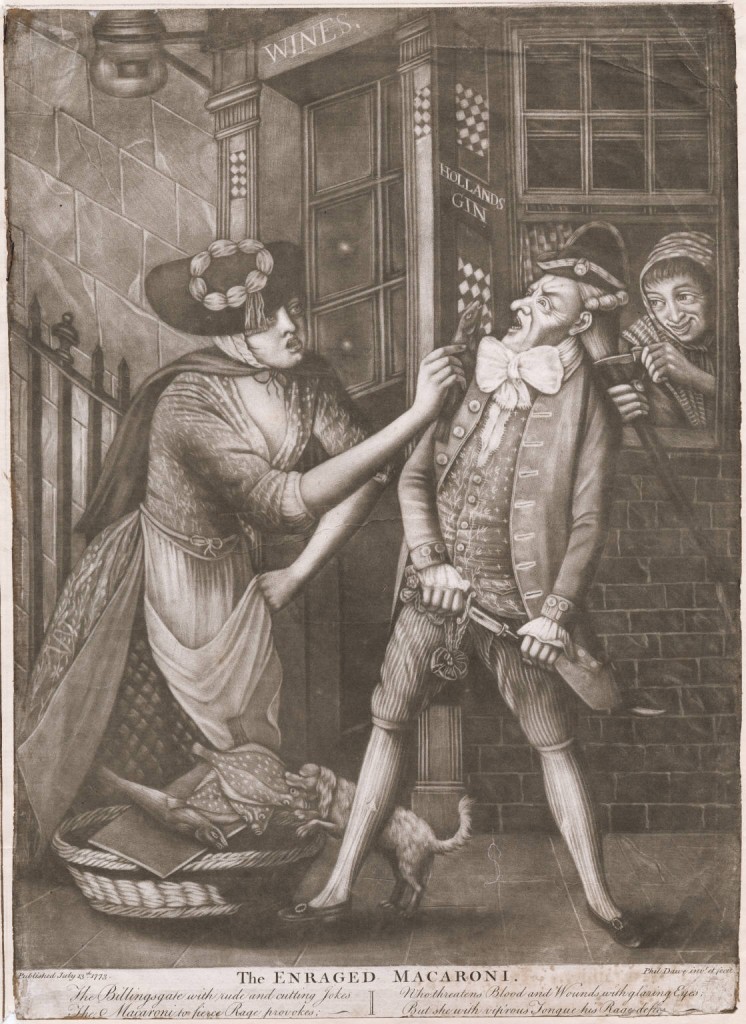 Another one from Lewis Walpole Library is entitled The Enraged Macaroni. I am unclear why the poor man is being assailed by the fishwife, or why someone is leaning out of the grog shop cutting off his ponytail (or rather, “queue”). He half-draws his sword to defend himself, while his dog helps itself to a flat-fish from the basket on the floor.

While on a similar subject, here is one of George Hangar, a friend of the Prince of Wales, getting his come-uppance at the hands of a Plymouth fishwife. 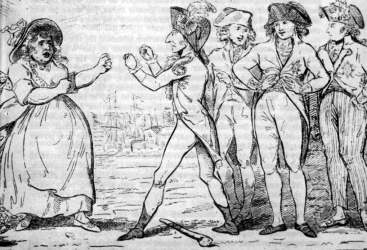 A newspaper report of the day states: “Major H-gn-r, on his late tour to Plymouth with the Prince of Wales, met with an accident which might have produced very disagreeable consequences. In walking before his Royal Highness to keep off the crowd, a fish-woman, whom he had pushed aside rather disrespectfully, by giving the Major a fisty-cuff, which, unluckily for his situation, knocked him into a kennel, to the no small entertainment of the Prince and his party, who laughed most heartily at the dismal distress of the Major.”

The  ‘kennel’ in question would  have been the drainage channel down the centre of the road, no doubt full of foul effluent. Memo to Mr Hangar: never mess with girls from Plymouth (I speak from experience…).

And to finish with, a rather nice pen and ink sketch from Thomas Rowlandson entitled “Billingsgate Brutes” showing a pair of fisherwomen door-stepping a young girl. She is too ‘afraid of her life’ to argue with the woman who assures her that ‘Madam, the fish is good’. “Smell the fish! What it stinks! Eh? You saucy young brim.” 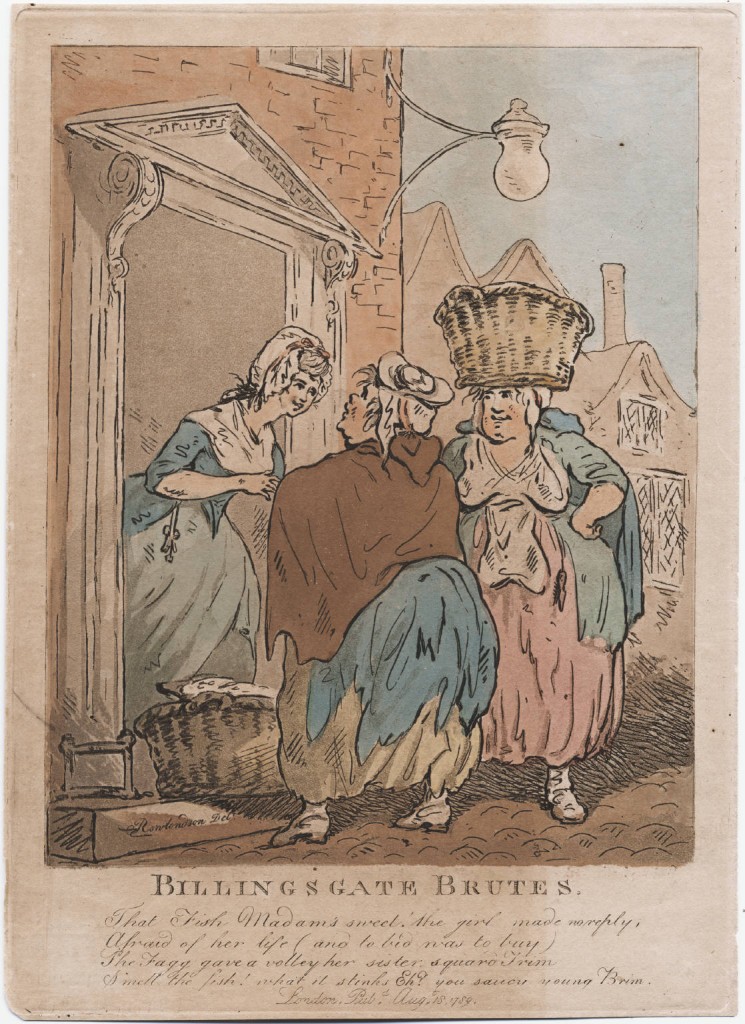 (I am at present exploring the delights of South Africa and Mozambique, but will resume normal blogging duties after Christmas).