A blog post I have been itching to do for some time…..

Perusing back numbers of the Gentleman’s Magazine (as one does) I came across this helpful tip – I think nowadays I have to call it a “household hack” – from 1735. It is a remedy for eradicating “bed buggs” and is a reminder of the doggerel verse quoted in the title to this piece. 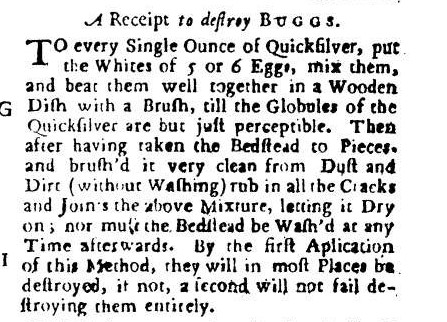 Now, I am not too sure how good an idea it is to paint mercury (ie quicksilver) into all the joints and cracks in your four poster bed, even if you have first made a nice mixture  using the whites of half a dozen eggs, but it looks like a fairly labour-intensive spring clean, involving dismantling the entire bed frame. Mind you, if your servants were too busy to do this for you, you could always enlist the services of the wonderfully named *Benjamin Tiffin “Bug Destroyer to His Majesty”, as per his trade card, shown courtesy of the Wellcome Library in London: 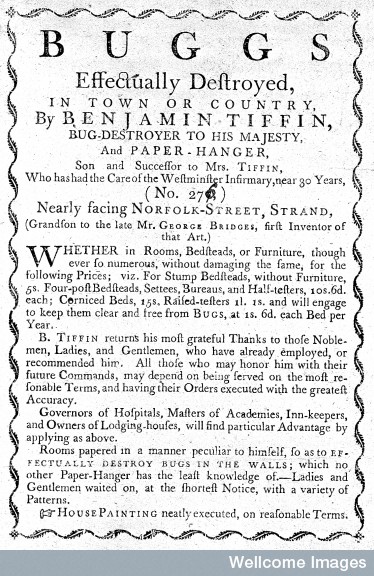 The 18th Century saw a  veritable explosion of bed-bugs, and by 1730 for the price of a shilling you could buy a treatise telling you all about it, and what to do or not do if you were affected. 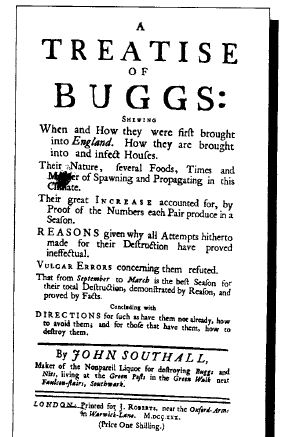 Bugg hunting gave rise to this rather nice print from Isaac Cruikshank , shown on the excellent Library of Congress site, and entitled “Summer Amusements – Bugg Hunting”: 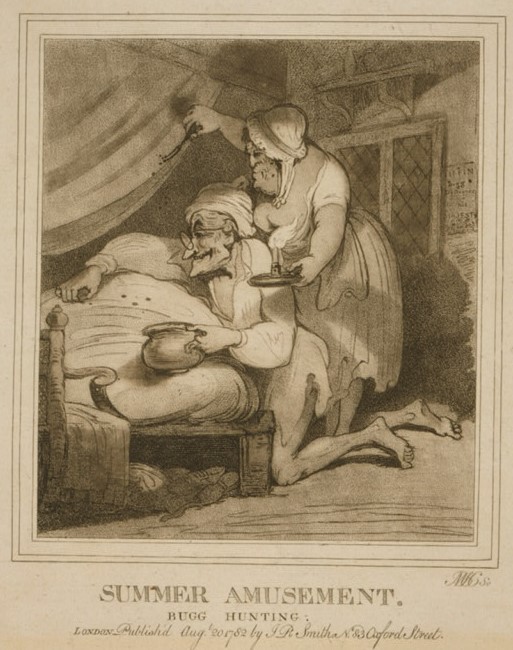 Now excuse me, but all of this makes me want to scratch…

The image appears on a somewhat esoteric site entitled The Bed Bugs Handbook, which you can find here if you are really interested!

*Post script: I had not appreciated that the Tiffin family have been pursuing the little blighters for over three centuries and are still going strong, and are based in Hemel Hempstead! Good for them – their website assures me that “The company has remained a ‘family’ firm for over 320 years, and to this day there has always been a Tiffin at the helm.” Those pesky bugs just wont go away – but fortunately, neither do the Tiffins! 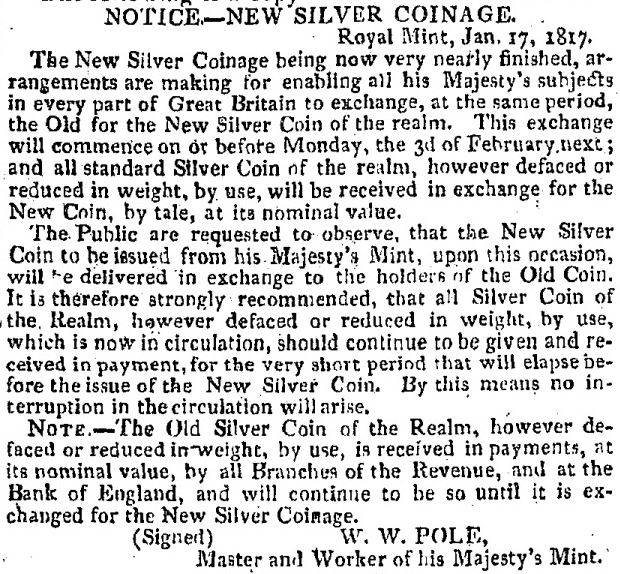 On 13th February 1817 a massive banking upheaval got under way. The “old” coinage in circulation was called in and exchanged for  a completely new coinage and within a mere two weeks the transfer was complete. It marked the culmination of a secret plan, headed by William Wellesley-Pole who was Master of the Royal Mint, and represented a determined effort by the British Government to restore public confidence in the coin of the realm. For years the public had suffered chronic inflation. They had had paper currency forced on them, which they generally distrusted, and for fifty years the Mint had not minted any silver in significant quantities. Smaller currency was often replaced with locally-minted coper tokens, many of which were only valid in the town of issue.

An added problem had been that the price of silver bullion had gone through the roof. Remember, all coins had a face value which was the same as its intrinsic value, so if the Royal Mint was making a one penny silver coin, it ended up as an absolutely minute sliver of silver – smaller than the size of a  pinkie finger nail. It had also got so thin that the design on one side of the coin interfered with the design on the other. The decision was made to decrease the purity of the silver being used. At the same time, the gold currency was given a total overhaul. Previously it was based on the guinea, a coin having a face value of twenty one shillings. From 1817 the guinea disappeared and was replaced with the pound – and a splendid new design by the Italian engraver Pistrucci was introduced.

The whole re-coinage was done in total secrecy, so as not to alarm the public. The distribution of millions of the new coins to Banks throughout the country was done without fuss or loss of any sort, and the whole thing was a huge success. Not that the public liked the new coins, with what was known as the “bull head” of the monarch George III. The problem for Pistrucci was that no-one had seen the King for some years – George III was totally senile, deaf, blind and unshaven, so Pistrucci had to ‘imagine’ a likeness. As with many engravers before and since, he chose to make the royal portrait younger. Wellesley-Pole was already hugely unpopular, as was Pistrucci. The latter was disliked because he was a foreigner, but Wellesley-Pole was despised even more. Not only had he refused to select designs submitted by members of the Royal Academy, preferring Pistrucci’s handiwork, but he was vain enough to have his initials, WWP, appear on the face of the coin. The bull head was considered ugly if not treasonous, giving rise to the ditty:

It is allow’d, throughout the town,

The head upon the new Half-Crown,

Is not the George we so much prize—

The Chin’s not like—the Nose—the Eyes.

This may be true—yet, on the whole,

The fault lies chiefly in the Pole!” 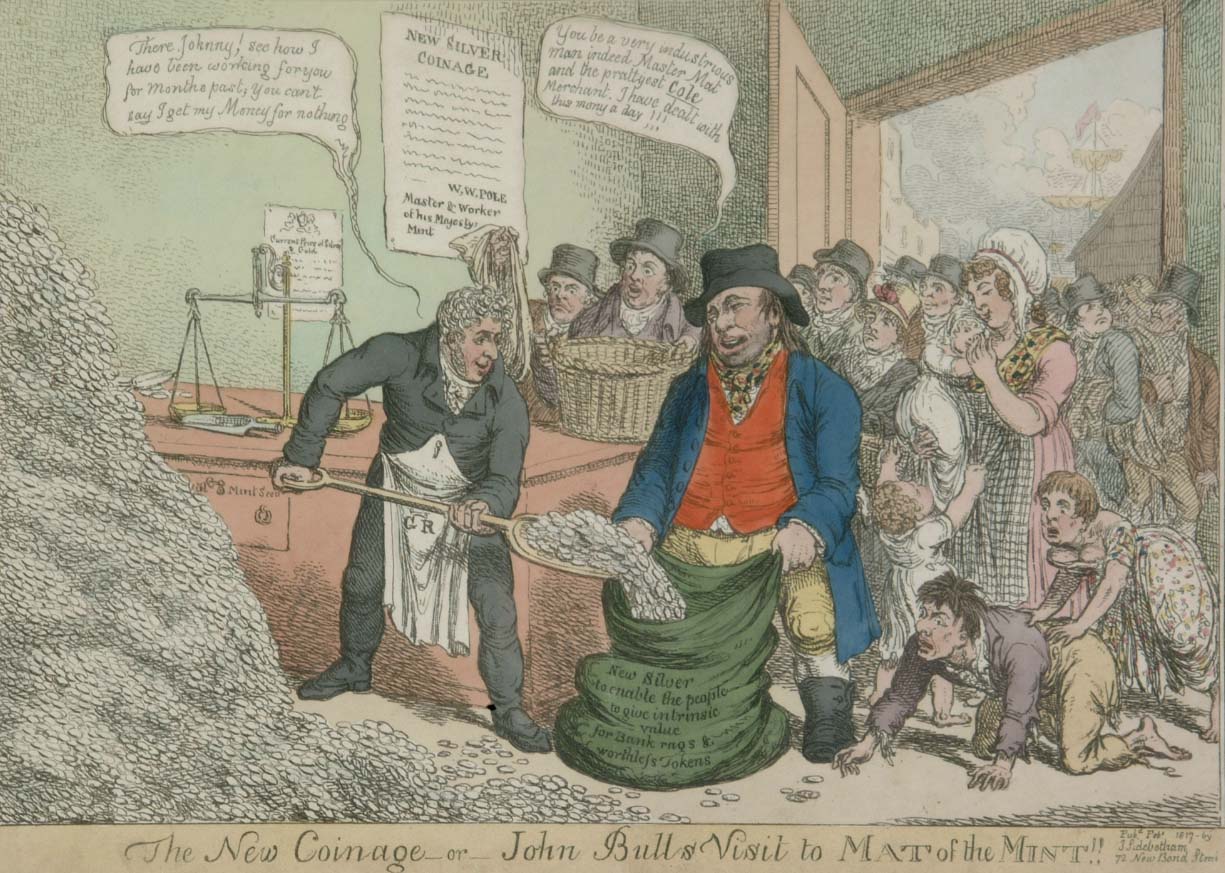 The original intention had been to swap all the coins between 3rd and 17th February but the start was delayed by a few days and got under way on the 13th. It gave rise to this caricature by Charles Williams and published by J Sidebotham on 13th February and entitled ‘The New Coinage, or John Bull’s visit to Mat of the Mint! ‘

It shows Wellesley-Pole, referred to as “Master and Worker of his Majesty’s Mint,” shovelling money into a sack, saying “There, Johnny! see how I have been working for you for months past; you can’t say I get my money for nothing.” John Bull replies, “You be a very industrious man, Master Mat, and the prettiest Cole merchant I have dealt with for many a day.”  His sack is inscribed: ‘New Silver to enable the people to give intrinsic value for Bank rags & worthless Tokens.’ Behind him, his wife carries a baby while her children, dressed in rags and with bare feet, scrabble on the floor. A large crowd are gathered behind the family, waiting for their turn to get their hands on the new coins which are being shovelled  in the manner of a coal merchant loading coal.

The change-over involved some 2.6 million pounds-worth of currency – that is, some 57 million coins – being delivered nationwide, using boxes containing £600 of coins (a bag of half crowns, four bags of shillings and another one of sixpences). The destination of each box had to be labelled for each of the 700-odd banks involved nationally, and the Mint employed over one thousand staff to oversee the arrangements. The boxes would then be used to return the old coinage by way of exchange. Astonishingly not one coin went astray – the books balanced to the penny.

The copper coinage was largely  left alone for the time being, but the popularity of smaller value silver coins led to the introduction of the groat (4d) and, during the reign of Queen Victoria, to a half-hearted attempt at decimalisation involving the florin (one tenth of a pound i.e. two shillings) and double florin. One thing was certain: the coins never looked the same again.

The reverse of Pistrucci’s iconic design for the sovereign i.e one pound coin, shown courtesy of the Metropolitan Museum of Modern Art. 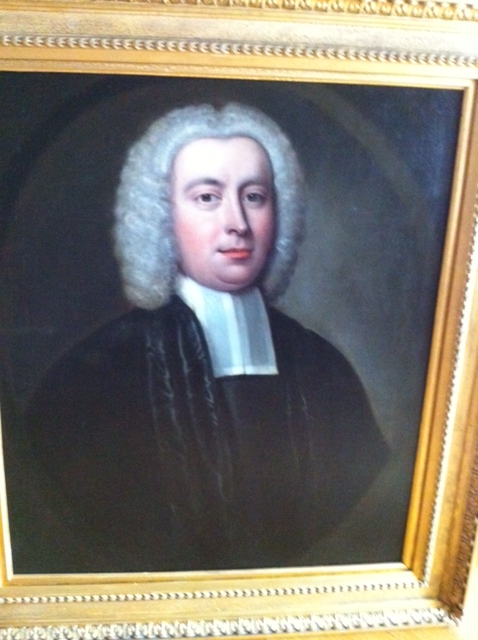 I have always been a fan of Nathaniel Hone. The Elder that is. Why? Not altogether sure really – for not being The Younger; for being Irish; for being extremely rude to that big-head from Plymouth, Joshua Reynolds; for having the guts to hold (a successful) one man show when the Royal Academy fell out with him – and for painting some rather fine portraits. What other reasons do you need?

When I was choosing images to use for my book “In bed with the Georgians – Sex, Scandal and Satire” I was delighted to be able to use the Nathaniel Hone portrait of the courtesan Kitty Fisher – complete with its double rebus of the cat (ie Kitty) having designs on the goldfish in the bowl (hence, Fisher). It has the added message that Kitty Fisher herself lived her life inside a goldfish bowl, constantly on public view, and reflected just below the rim of the bowl you can see the figures of people staring in from the window at the scene being painted by the artist.The original is in the National Portrait Gallery, so thanks to them for the use of the image: 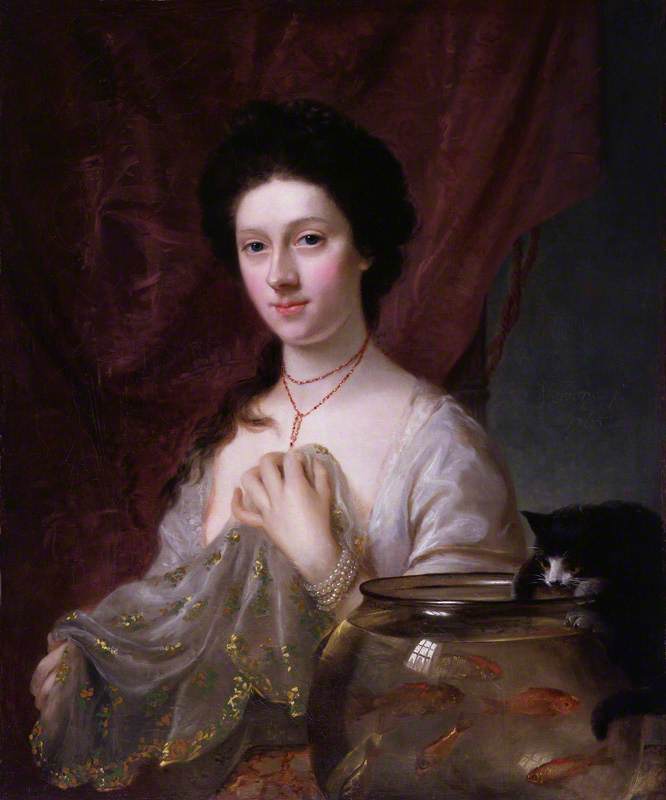 I blogged about Hone here – and by chance after an interval of a couple of years I have had a response from someone who saw the blog and needs help identifying the subject of two portraits they were fortunate enough to have acquired at auction – and which are now found to have the signature of ‘N Hone’ and the date of 1742. But who are the subjects of these paintings?

Nat left Ireland in his early twenties, got married  and eventually came to London in around 1742 but I do not have an exact date. Does anyone know when he actually left Ireland?  And is it too fanciful to think that he may have painted the portraits of his Mum and Dad, before he left home, as mementos? Other than that his father was a Dutch merchant who had settled in Dublin, I know nothing of his family background. Has anyone any ideas? Here we have- the unknown lady: 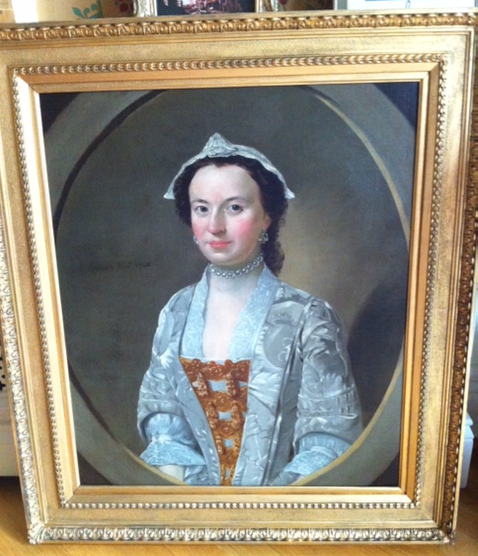 And at the top of this blog post is the portrait of an unknown gentleman, painted in the same year – here, the signature and date: 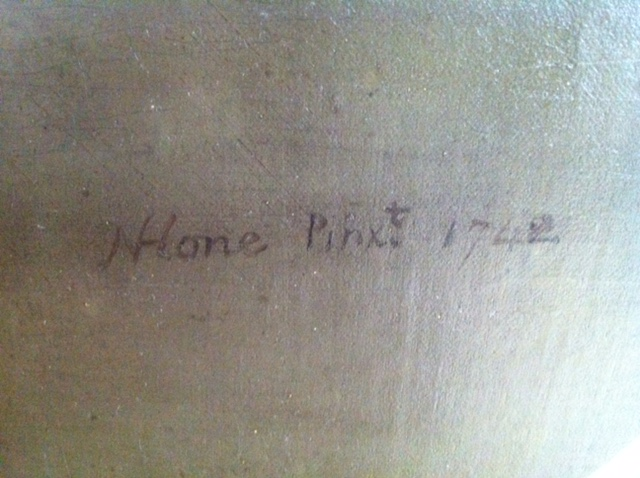 And if that is not enough of a conundrum, the same auction yielded one other surprise – a portrait of another unknown gentleman, this one painted by the Swedish-born artist called Michael Dahl. He was active in Britain between 1682 and his death in 1743 and he painted a number of members of the royal family, as well as various aristocrats. When Dahl first came to Britain he came into the orbit of Godfrey Kneller, and through him made a number of contacts and subsequent clients. Does anyone recognize the subject in this one? 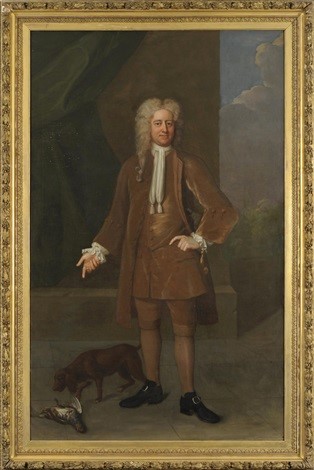 I will pass any suggestions on to the new owners of the three pictures – and I am sure they will be most interested to hear your ideas. Thanks!