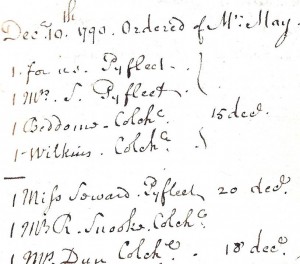 Christmas time was so much easier in the Georgian era! My ancestor Richard Hall did all his Christmas shopping with one supplier, a fortnight ahead of the Big Day. Everyone got more or less the same – oysters. He would drop a line to Mr May, fishmonger, and order a barrel of oysters to be sent to his family and closest friends. They would be delivered on specified dates in the week leading up to Christmas, and Richard could no doubt sit back on the day itself and reflect on the fact that it was indeed Christ’s birthday, a time for giving and receiving in memory of His blessings, and he would enjoy the pleasure of having given. No riotous early-morning ripping open of presents, no vast meal, but a trip to the church to sit on hard seats listening to an uplifting sermon by the Reverend Beddome, knowing that the good Minister would then be able to go home and dine on the barrel of oysters sent round a few days before…

Mind you – there was an element of class and status to this – Richard’s more important and prestigious friends got the Pyfleet oysters which cost four shillings and three-pence per hundred. The lowly Minister, like some of the other neighbours in Bourton on the Water, had to contend themselves with the somewhat inferior Colchester oysters, which cost a shilling less for each barrel! Some years friends moved up the scale and were rewarded with better oysters, just as some years others appear to have fallen out of favour and were downgraded. I just wish present-giving was as straight-forward today. But we can still enjoy the day, and be thankful.

The diaries kept by Richard – and by his brother-in-law William – suggest that there was no huge blow-out on Christmas Day. Lunch was a modest affair, not a lot different to a Sunday Lunch. No doubt he washed down his chine of pork with a few glasses of wine, but then, he always was partial to a drop, and Christmas was no different to any other day….

Peace and goodwill to all ! 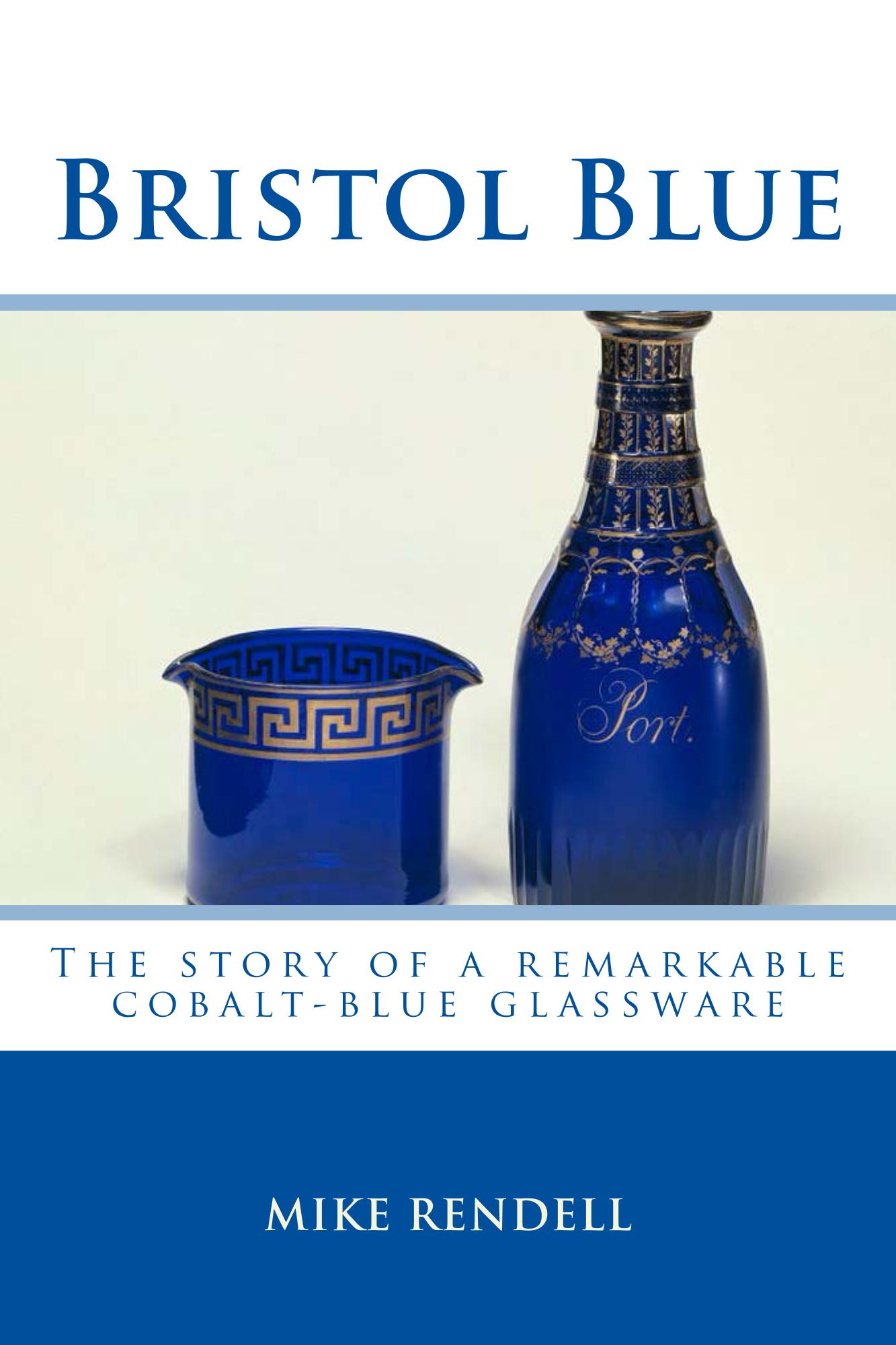 I am always amused, at this time of year, to see how sales of a small book I brought out a few years ago and entitled “Bristol Blue Glass – the Story of a remarkable cobalt-blue glassware” suddenly leap. It is a reminder that one of the things about writing is that the ‘rewards’ are often not immediate, but can be spread over many years. With Kindle, in particular, it is fascinating to see how sales can tie in with other articles, or blogs, or public lectures, often several years after the ‘hard work’ of writing the book have finished. 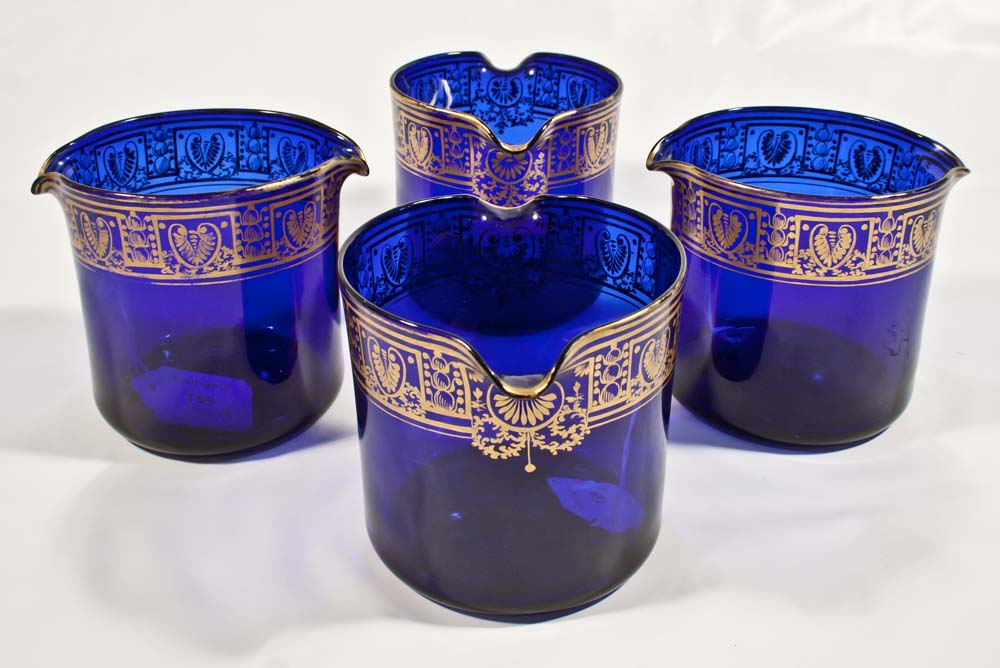 Clearly this book appeals to people who want to give a token to someone they know and who likes Bristol Blue – it isn’t a definitive book about every single maker of blue glass through the ages, more an overview of how the fashion for blue glassware swept the country, catapulting  the Jacobs family in Bristol to considerable fame and fortune. It also describes how the family were left stranded, bankrupt and shunned by the community, when the sales boom collapsed. Tastes moved on to other exotica such as cranberry glass and so on, and nobody wanted to be seen dead with oh-so-dated blue decanters, wine-glass coolers and condiment sets adorning their fashionable dining tables. 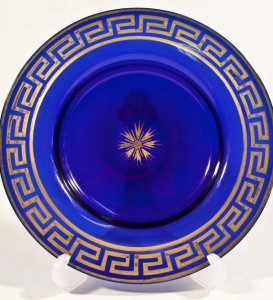 I must admit I love some of the 18th century examples, whether they were made in Bristol, or Newcastle, or in the West Midlands.

For anyone interested in the book, you can find it on Amazon.co.uk and at Amazon.com  – it is never too late to fill a stocking! 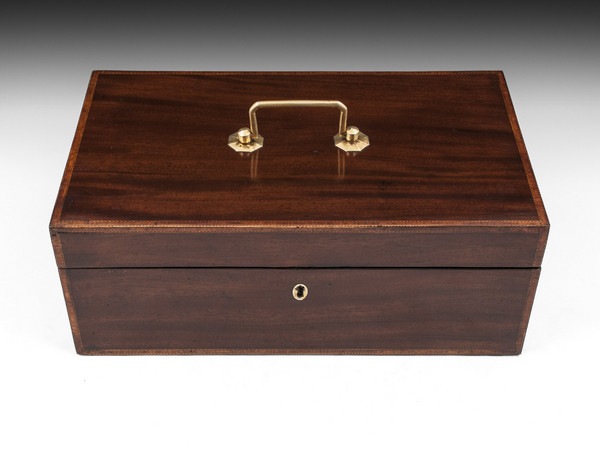 I know, I know, I have a thing about boxes, especially if they consist of tea caddies and I have often blogged about them. But here is a sensational example of a caddy set, in a beautiful wooden box, shown on Mark Goodger’s Hampton Antiques site. 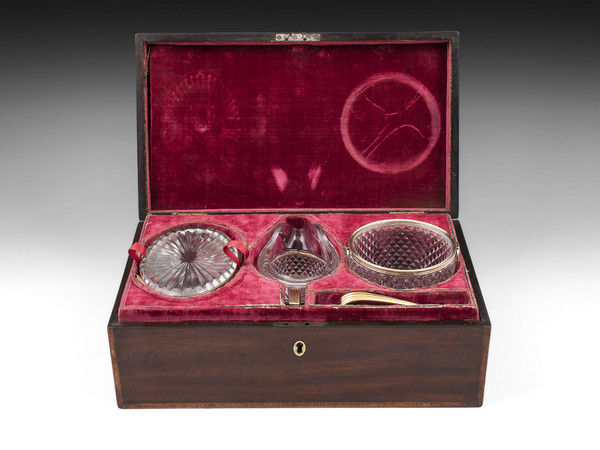 The box is a beauty, veneered in Mahogany with a chequered tulip wood cross banding all round. The top has a gilded carry handle but it is when you open the lid and look inside that you see the real quality – a matching silver gilt service. The Hampton’s site describes it as “a tea caddy, jug, and caddy bowl; each with square pyramid-shaped cut-glass sides, radiating design to the bases, and silver gilt reeded band. The jug features an interesting Greek key handle.”

There is also a pair of matching silver gilt sugar tongs. The silver gilt edging  to the glass has an 1803 hallmark and the silversmith is given as William Rudkins, He died in 1807 and his burial is noted at St Luke, Finsbury. He was 57 years old when he died and had previously practised as a silversmith from Gee Street in Middlesex. His son James was also a silversmith. 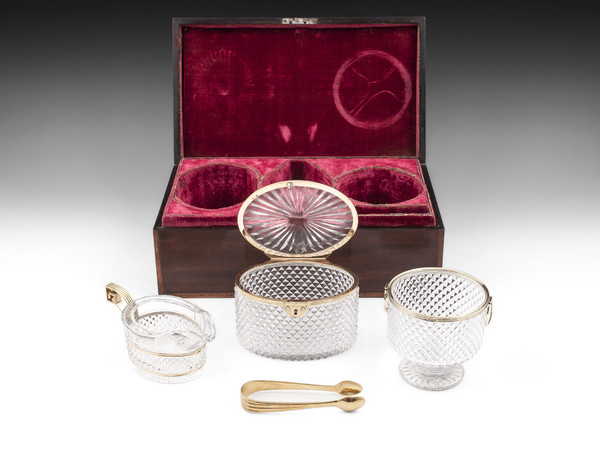 I cannot be sure about the maker of the glass ware, but my hunch is that the pieces may well have come from John Blades, Glass Manufacturer of 5, Ludgate Hill. I have come across other pieces  which resulted from a shared Blades/Rudkins cooperation. John Blades opened his Ludgate Hill showrooms in 1783 and remained there until his death in 1829. He was appointed Cut Glass Manufacturer to George III and was known as ‘the great glass man of Ludgate Hill’. The National Portrait Gallery has a portrait of him wearing the robes of the Sheriff of London and Middlesex. According to the Burghley Collections site his was the first glass company to open a branch in India, in Calcutta, and was famously commissioned to create a great glass Gothic tomb for the Nabob of Oudh. So now you know! More to the point he made wonderful chandeliers, and was a master of manufacturing the sort of glassware shown in this caddy box. 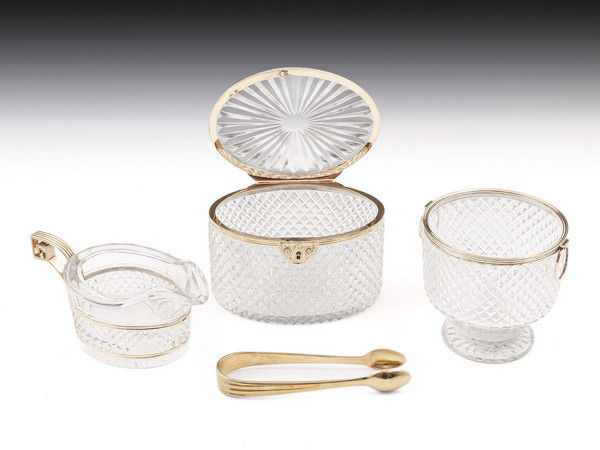 The whole thing makes for a beautiful  item – I don’t have a spare £9,500 – unfortunately! But if I had, it would be my Christmas present to myself. Stunning.

“In bed with the Georgians: – Sex, Scandal & Satire” was published a year ago – how time flies – and there have been some lovely reviews (see here). Another review has just appeared in a splendid bi-monthly publication called Jane Austen’s Regency World – it is a full-colour magazine packed with articles about Austen and the world she lived in. Anyone interested can find subscription details at janeaustenmagazine.co.uk

Anyway, I will set out the review in full: 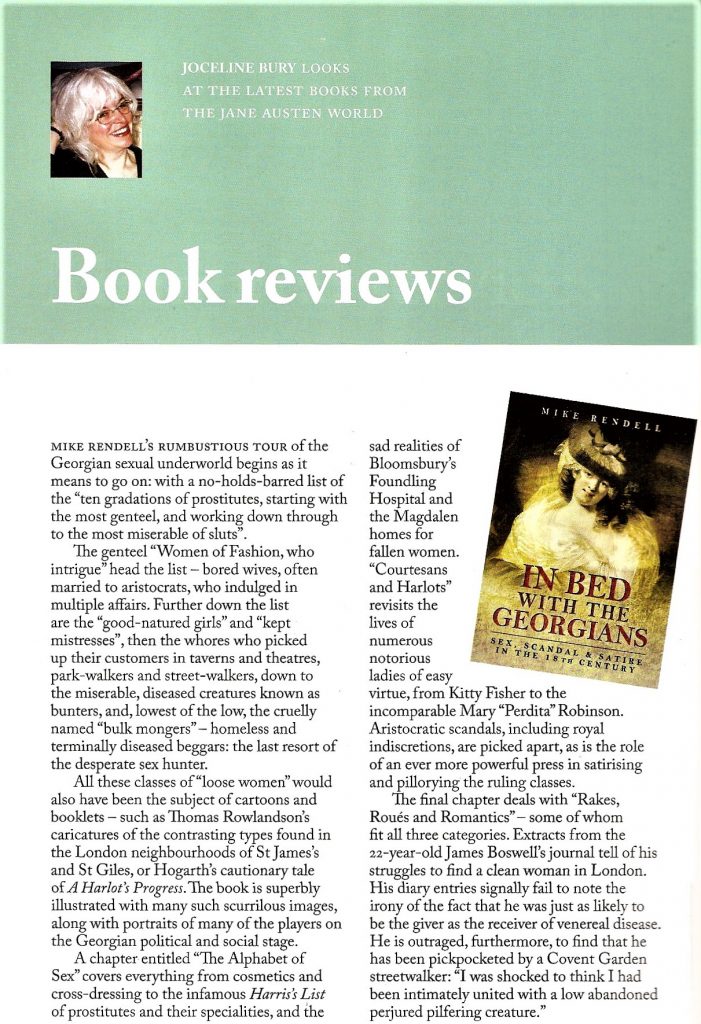 Just by way of an update, Pen & Sword will be publishing my next book, “Trailblazing Women of the Georgian Era” in the Spring and I am just about to hand in the manuscript for a book on piracy, provisionally entitled “Plunder”. At the moment I am finishing off the final ‘what if’ chapter – what if piracy had not been driven out of the West Indies in the 1720s? What if colonial trade had dwindled because merchants were unable to get their goods in and out of the colonies? What if the pirates really had developed their own utopian government in the Caribbean, syphoning off all the profits for themselves? Would we have had a British Empire? Would we have been able to afford an Industrial Revolution – and would sailors have preferred to engage in piracy rather than devote their energies to the slave trade? We think of our colonial past as something inevitable, whereas it was far from certain that places such as Jamaica would ever be profitable in their own right. You only have to think of the disastrous attempt by Scotland at the turn of the 18th Century, attempting to colonise the Darien Peninsula and thereby hoping to become a colonial power in its own right, to realize that many attempts ended in abject and expensive failure. In Scotland’s case it forced them to accept the Union with England – it was the price they paid for being bailed out. It is interesting to consider what would have happened if piracy had bled Jamaica dry – would Britain have decided to pull-out of its colonial aspirations and concentrate instead on its position in Europe? The world would certainly have been a different place…

As for sex and scandal – well, nothing has changed there! The satire is a bit more anodyne, and the behaviour of our rulers is slightly more tame and less outrageous than it was a couple of centuries  ago, but I can well imagine someone writing a follow-up in 200 years time, to be called “In bed with Millennials: Sex, Scandal & Satire”. The difference is that nowadays things are rather more furtive and secretive – 250 years ago our rulers revelled in their notoriety. Their sexual dalliances were a badge of honour. But some things never change – generally speaking it is the rich who have the fun, and the poor who pay the price….