Another Carington Bowles print, this time based on a painting by John Collet and shown courtesy of the British Museum: 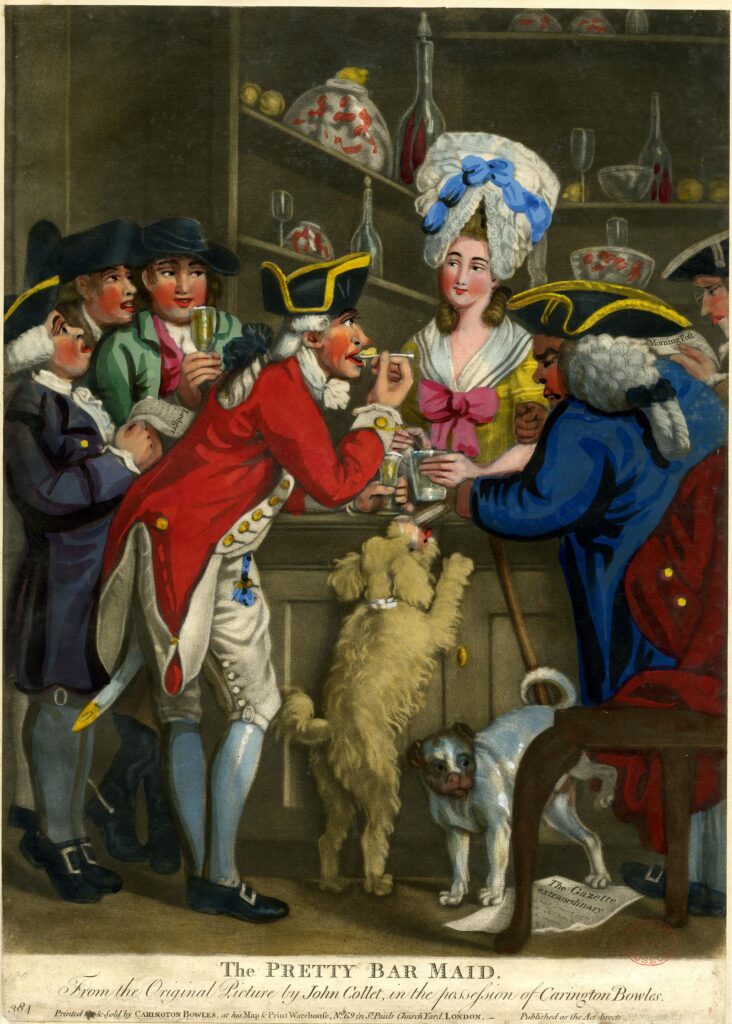 It shows the scene in a tavern where half a dozen men are eagerly  jostling to attract the attention of the attractive woman behind the bar.

I love the detail, the dog urinating on a copy of ‘The Gazetter Extraordinary’ on the floor while a man on the left, on tip-toes, reads a copy of a paper called the “Public Ledger”. On the extreme right a bespectacled man reads the “Morning Post”. Another dog stands on its hind legs, eager not to miss any of the excitement, while a man in military uniform, eating what looks like jelly or a custard from a glass with a teaspoon, looks intently at the barmaid. She wears a spectacular hat and is seen serving behind the bar, at the rear of which numerous glass and pottery bowls are displayed.

The hand-coloured mezzotint was published in July 1778. And just to show how different the print looks when finished by a different colourist, here is the same print in the possession of the Colonial Williamsburg Museum: 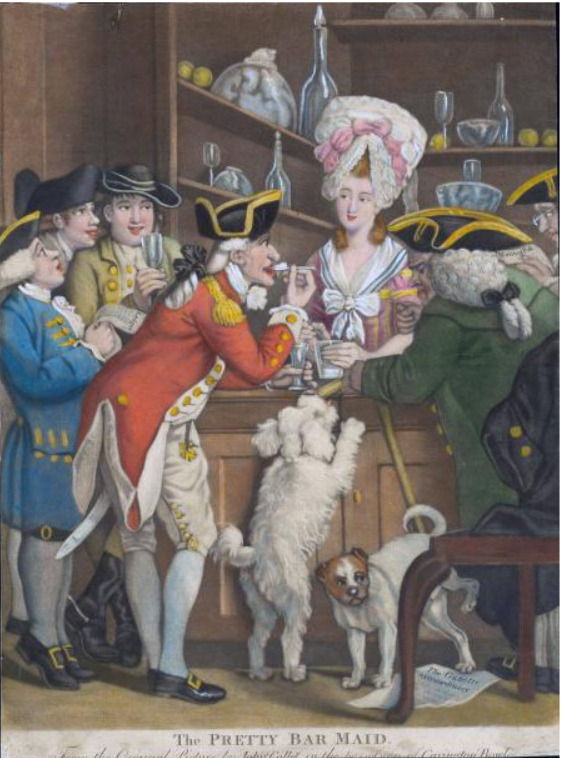 I actually prefer the Colonial Williamsburg version – but then again, I am biased. CW have kindly invited me back to give a talk at their week-long 18th Century seminar in early 2022. The theme is virtue and vice. And no, let’s just say that I will not be talking about virtue. Vice? Well, that’s another matter…

A nice mezzotint by Carington Bowles, dating from 1771 and shown courtesy of the British Museum: 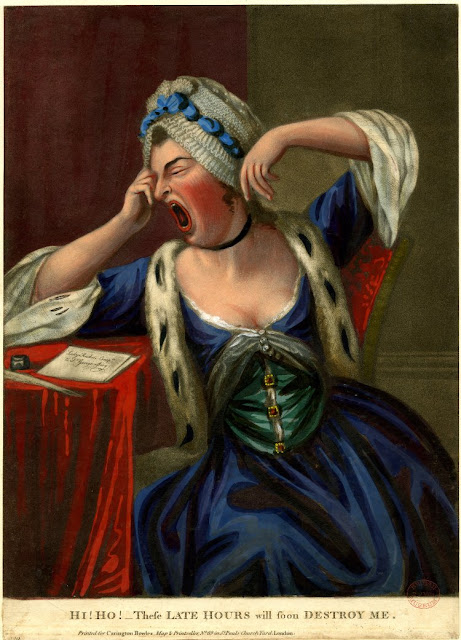 It is entitled “Hi! Ho! These late hours will soon destroy me” and shows a fashionably dressed lady –  a prostitute –  sitting down after a late night, hands raised, mouth wide open in a yawn.  She sits alongside a table where a piece of paper reads ‘Lady Racket’s compts to Sr George Airy’.  I don’t think we have to worry about who George Airy was – it is a pure coincidence that a famous astronomer had that name as he wasn’t even born until 1801, at least thirty years after this print first appeared.

Clearly, she has charged for her services and now, as ‘a lady of the night’ she  is regretting the loss of her beauty sleep.

Below the image are the words ‘Printed for Carington Bowles. Map & Printseller, No. 69 in St. Pauls Church Yard, London’.

If there is one caricaturist I love more than Thomas Rowlandson it has to be James Gillray – and  I  feel I should mention one site which really helps understand this wonderful, vituperative and often scandalous artist. It belongs to Jim Sherry and is called ‘James Gillray – Caricaturist’ and the link is here.

Every month or so sees a small list of caricatures which are then explained in detail and put into their historical context – and the explanations are fascinating.

I give as an example a delightful piece which is included in the current list, entitled ‘Flannel Amour – Female Patriotism’. I can do no better than repeat it verbatim – with Jim’s permission. I must admit I wasn’t familiar with this particular caricature, which came out nearly 228 years ago. It reads as follows:

“In this delightful print in which he takes full credit for both the drawing and etching, Gillray imagines a hands-on response among the British female population to the growing likelihood that the Flanders campaign, after its initial successes in the Spring and Summer of 1793, would be extended into the colder months of Winter and into 1794. He shows these patriotic women—both old and young, plump and slim—assisting the troops in donning their new “flannel armour” donated as part of the war effort.” 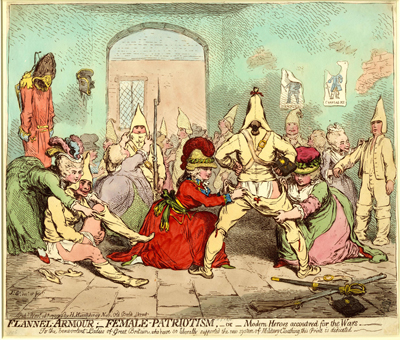 “Predictably, the print is full of sexual innuendo. The woman on the left bends way over using both hands to pull up a flannel sock over a soldier’s one extended member, leaving him to protect a more intimate one (for which his leg may be a symbol) with a scrap of shirt and his hand. Two women with their eyes obviously on the prize pull up the flannel breeches of a soldier with his back to us. It is certainly no accident that the central figure is dressed in vivid scarlet or that a musket with bayonet behind her rises prominently and precisely in the center of the entrance to an interior room.

As early as October 11, 1793, the Edinburgh Advertiser announced the formation of a “VOLUNTARY SUBSCRIPTION for supplying the BRITISH TROOPS on the CONTINENT with FLANNEL WAISTCOATS.” The article pointed out that

the present seat of the war [Holland] is a cold and a damp country; and the season is approaching when our soldicrs in those parts may, it is to be feared, be in greater danger from disease than from the sword of the enemy. (P.9)

The announcement was followed by a list of more than 50 Scottish donors, including Lady Dundas, the wife of Sir Lawrence Dundas, Commissary General and supplier of goods to the British Army who must have known a thing or two about cold raw weather and the kind of clothing appropriate to it.

Although the idea for a voluntary subscription for protective clothing seems to have orginated in Scotland, it was soon imitated by dozens of others further south, and enlarged to include “YARN WORSTED STOCKINGS and FLANNEL CAPS,” as advertised in the London Times for November 9. In the same article, the “Duchess of Leeds” was listed one of the principal subscribers.

But the most likely inspiration for Gillray’s print was the following note appearing in the St. James’s Chronicle just nine days before Flannel Armour appeared. 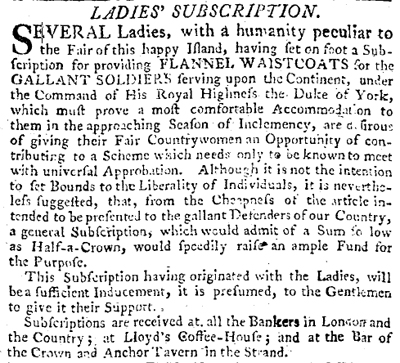 Taking the article at its word, Gillray ladies took the “opportunity of contributing” to the generous scheme, but not in the way that the Chronicle’s author intended.

So, if you like Gillray’s etchings do have a look at Jim’s site – and if you add your e-mail address to his subscription list you too can receive regular snippets about the work of this extraordinary artist.