Inflation is a recurring feature of the economy – and it is easy to forget that rising food prices have been worrying people for centuries. I was interested in Richard Hall’s diary entry for  1801 – or rather, an entry in his ongoing review of  what was happening  in the world around him (earthquakes, floods, natural disasters – and  the rising cost of wheat).

He writes: “A Melloncholly time for the dearness of Grain and all sorts of Provisions. Wheat at £55 and £60 the load. Malt 15 shillings the bushel. Mutton nine-pence, Veal nine-pence and Beef eight-pence. Bacon sixteen-pence and cheese ten-pence. Eggs have been as high as tuppence ha’penny each (in April was at four for tuppence).”

But there was some good news as the price of bread started to fall slightly: “March 5th – Bread was one shilling and ten-pence ha’penny for the Quartern Loaf – in April it was one shilling and nine-pence farthing.”  A drop of a penny farthing  over a one-month period may not seem a lot, but back then it was all part of the economic uncertainties linked to poor harvests at home – and the cost of the wars with Napoleon abroad. Bread  really was a staple part of the diet and Richard regularly recorded the cost of his Quartern Loaf, throughout his adult life.

The entry can be compared with what Richard wrote exactly one year earlier – saying that 1800 was memorable for  the high price of corn (“some wheat sold for  £40 and £46 the load”). He commented that the poor in the Country “were obliged to eat very bad bread – distressing to behold.” At that stage the Quartern Loaf was one shilling and sixpence – so it was to rise by another three or four pence over the course of the year – getting on for a twenty per cent increase. We worry about inflation at 9.5% – back then, it was double that rate!

Very early this morning a tremendous storm of Lightning, Thunder and great rain – was particularly dreadful in London. The Lightning and Thunder very awful. What a Mercy to be preserved! The Newspaper says “of the dreadful flashes of lightning and the awful peals of thunder that prevailed, no adequate description can possibly be given”

Richard goes on to say that the storm was felt far and wide and that the poor-houses at Yateley in Hampshire were badly damaged. “Two women were struck down by the lightning, but providentially neither of them received any material injury.”

They must be a hardy lot in Yateley – I only know of the place because Flora Thompson, author of the trilogy of novels ‘Lark Rise to Candelford’, lived and  and worked in the Yateley Post Office, back in the early 1900’s.

225 years ago, as now, the weather was a constant topic of conversation,  with each weather pattern more alarming and more extreme than the one which went before….. 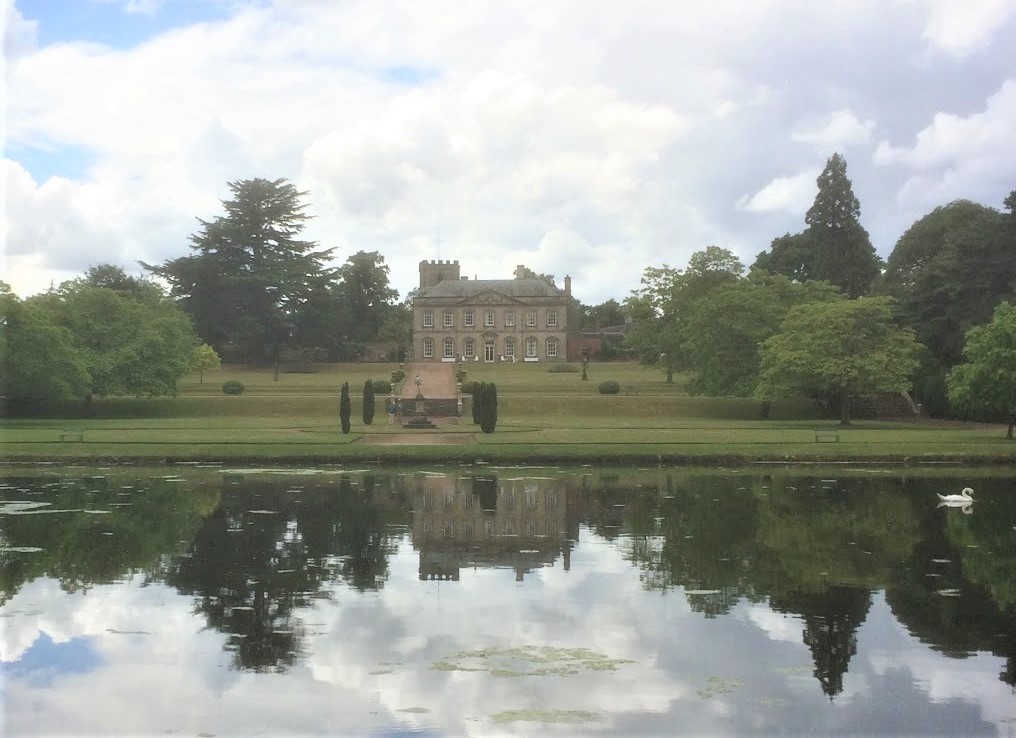 Melbourne Hall from the lake

Before Capability Brown, and before rococo whimsicalities, there were gardens designed in the French style. Two names dominated the English garden scene at the start of the 18th Century: George London and Henry Wise. Copying the ideas  laid down by Le Nôtre, these two partners from the celebrated  Brompton Park Nursery re-designed many famous gardens across the country – at Chatsworth, Longleat, Burghley and at Hampton Court – to name but a few. Most of their designs were phased out later in the century, but the bones of one of their gardens can still be seen at Melbourne Hall, eight miles south of Derby. It has the typical wide terraces, the yew hedges, the extensive use of statues of cherubs and mythical figures, the formal ponds and some magnificent specimen trees. 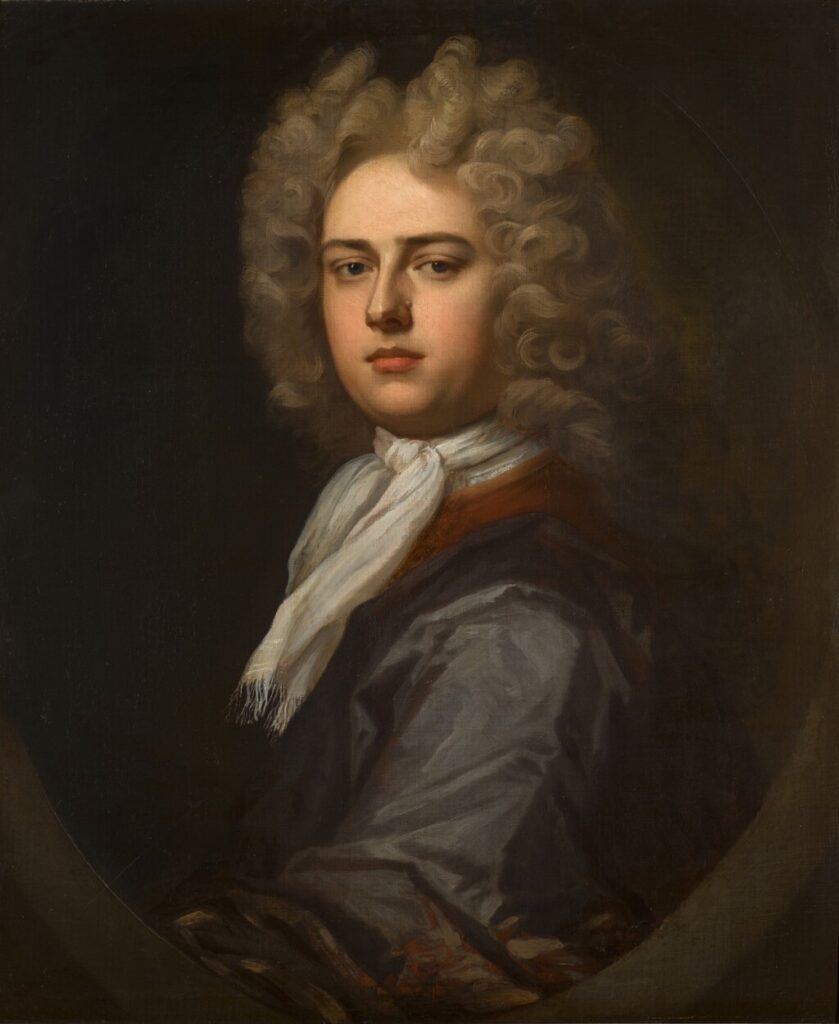 The land on which Melbourne Hall is built was originally purchased by Sir John Coke in 1710 – he had been an MP for several years during the reign of William III. The family were well-connected and his son Thomas  was still a minor when both his parents died and he inherited the estate. After a few years enjoying the dissolute delights of the Grand Tour  he returned to Melbourne Hall and set about laying out the garden, as well as building a large and elegant extension to the house, consisting of  an entire wing overlooking the grounds.

Later generations of the family included William Lamb, who as Second Viscount Melbourne, became Prime Minister – and gave his name to the city of Melbourne in Australia.

Thomas went on to become Vice-Chamberlain of the Household to both Queen Mary and George I and for a short time (in 1704) had been Teller of the Receipt of the Exchequeur – posts which no doubt provided him with a handsome income, enabling him to plough huge sums of money into his building and garden projects. Even so, his income was insufficient to finish the job and when Thomas died  at the age of 52 his son, another John, immediately set about changing the garden designs. It means that some of the original baroque flavour of the garden has been lost, but thanks to the work of the present members of the family, it has been reinstated as a fascinating and rather beautiful garden, which is thankfully open to the public.

The one thing which strikes you as a modern visitor is how odd it is having an off-centre pathway leading from the house to the garden – it looks unbalanced. Apparently it arose because the original plan was for a much larger building, to which the path would have been central. 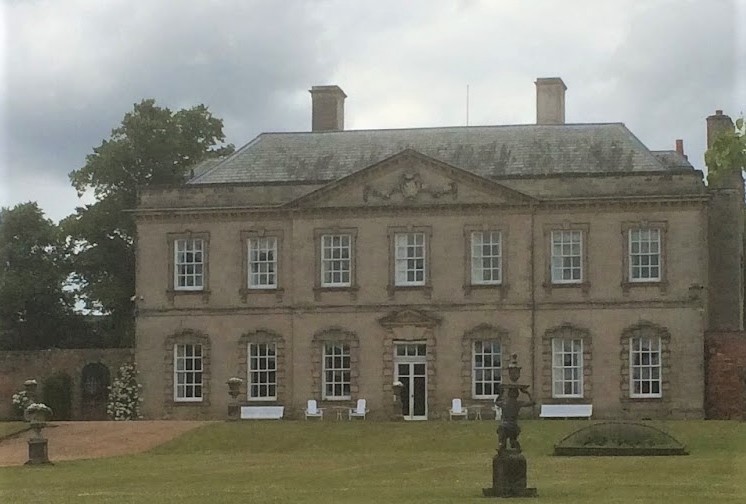 The extension of the house facing the garden

Nowadays the house is the private home of Lord and Lady Ralph Kerr and is only open to the public for a short while each year (in August).The gardens however  are open three days each week from April through to September and they really are a delight.  Whereas the house is a Grade 2* Listed Building, many of the features in the garden are awarded Grade 1 status, and very fine some of them are. What is called the birdcage is in fact a wrought iron arbour made by the celebrated iron-worker Robert Bakewell between 1706 and 1708 (it was finally finished in 1711) with its  domed roof and iron oak leaves inter-twined with scrolled panels. Research informs me that  ‘the repoussé detail is painted with Bakewell’s hallmark ‘Smolt Blue’ paint and gold leaf.’ Apparently it cost Thomas Coke all or £120 – money well spent for such an intricate structure! 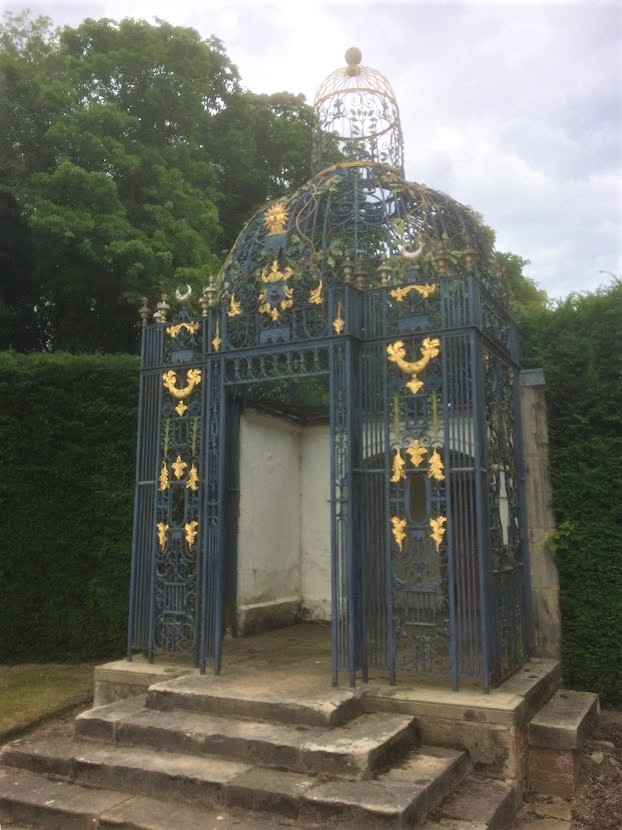 Statues are a feature of the garden, including works by Jan van Nost. Most notable is the Four Seasons monument, which was a gift from Queen Anne, but there is also a statue of Mercury, as well as numerous cherubs dotted all over the place. For my money the trees have it – some huge and unusual specimen trees including magnolias, tulip trees, hybridised oak trees, several pond cypress and something which I think I saw called an Indian Bean tree. 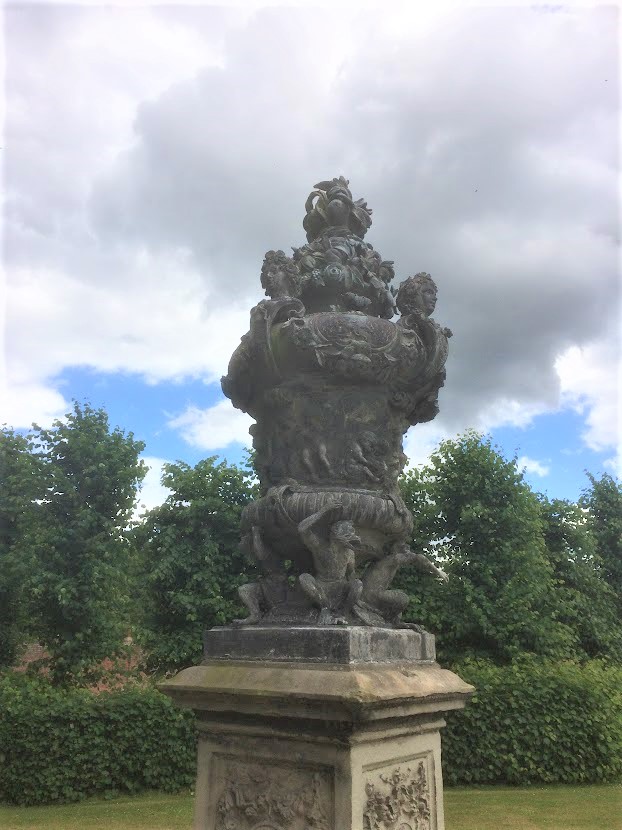 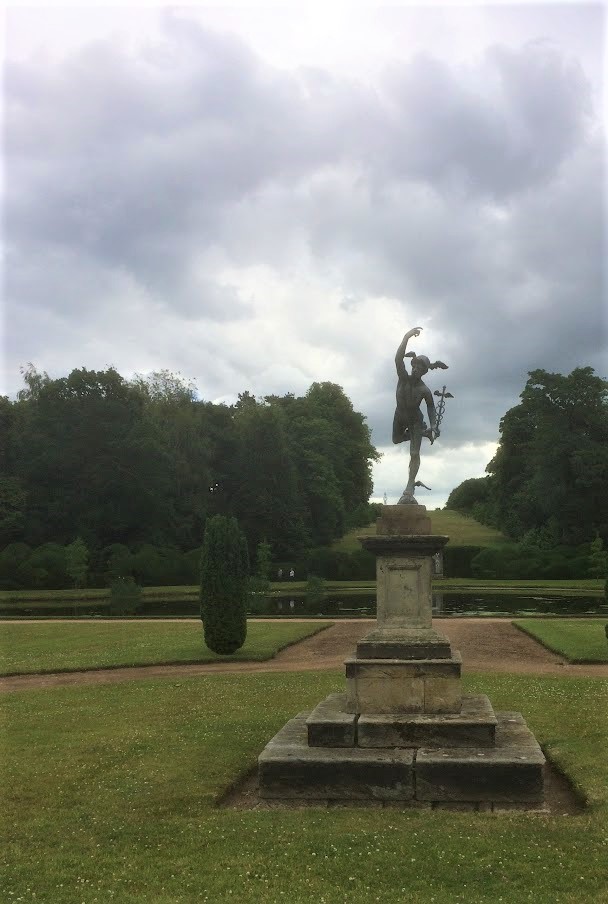 It is fascinating to walk through the yew tunnel and to see how the yews, neglected in the past for many years, have out-grown their straight jackets and evolved into wibbly-wobbly  clouds of green foliage, trimmed beautifully but irregularly. 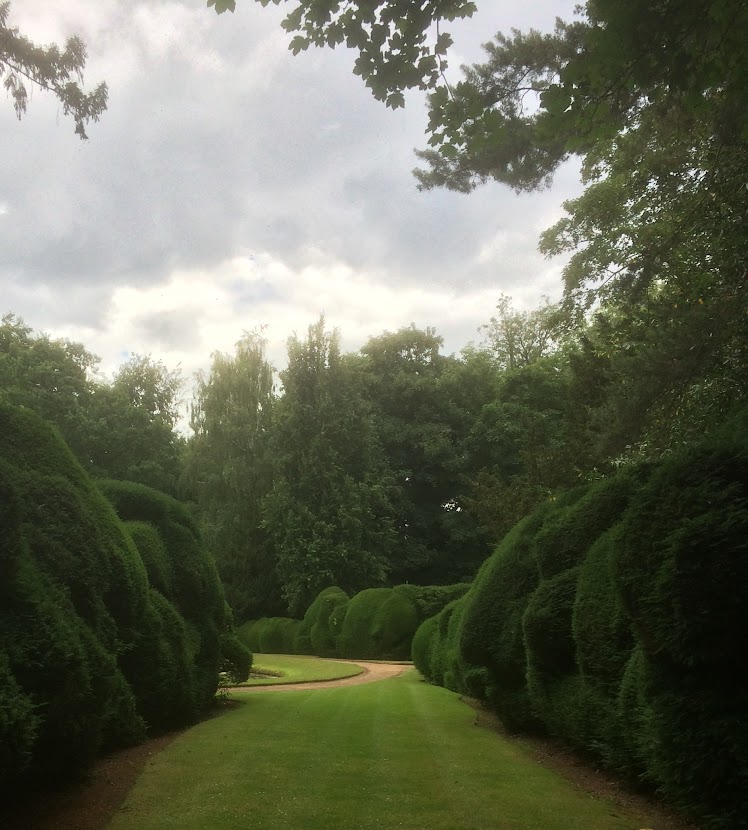 All in all, a great place to visit – though I did feel sorry for the large party of Dutch tourists who arrived just as I was leaving and who were, within seconds, hit by a ferocious cloud-burst which must have absolutely drenched them. Not easy to appreciate the delights of “the repoussé detail painted with Bakewell’s hallmark ‘Smolt Blue’ paint and gold leaf” if you are soaked to the skin…. 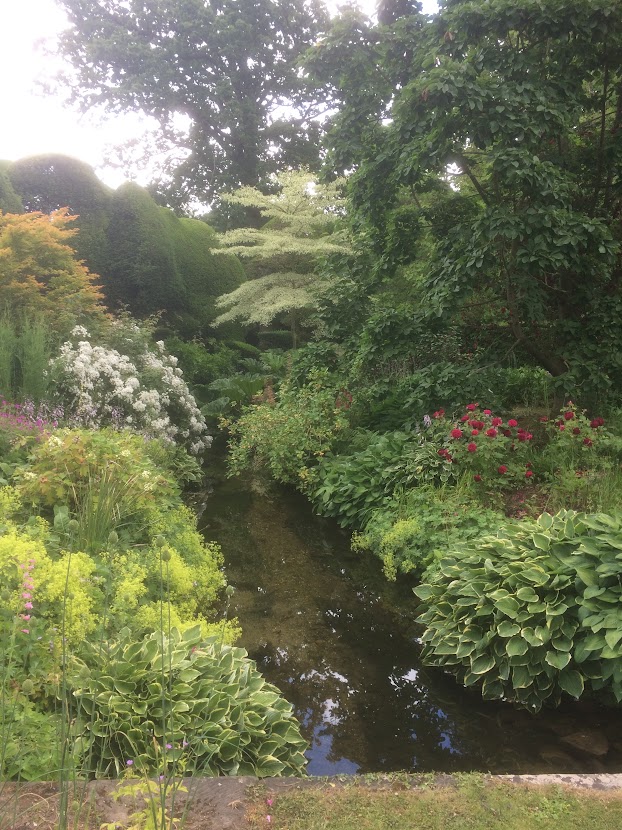 A brook flows through a beautiful group of shrubs.