20th November 1804 – a woman taking control? How quite intolerable! 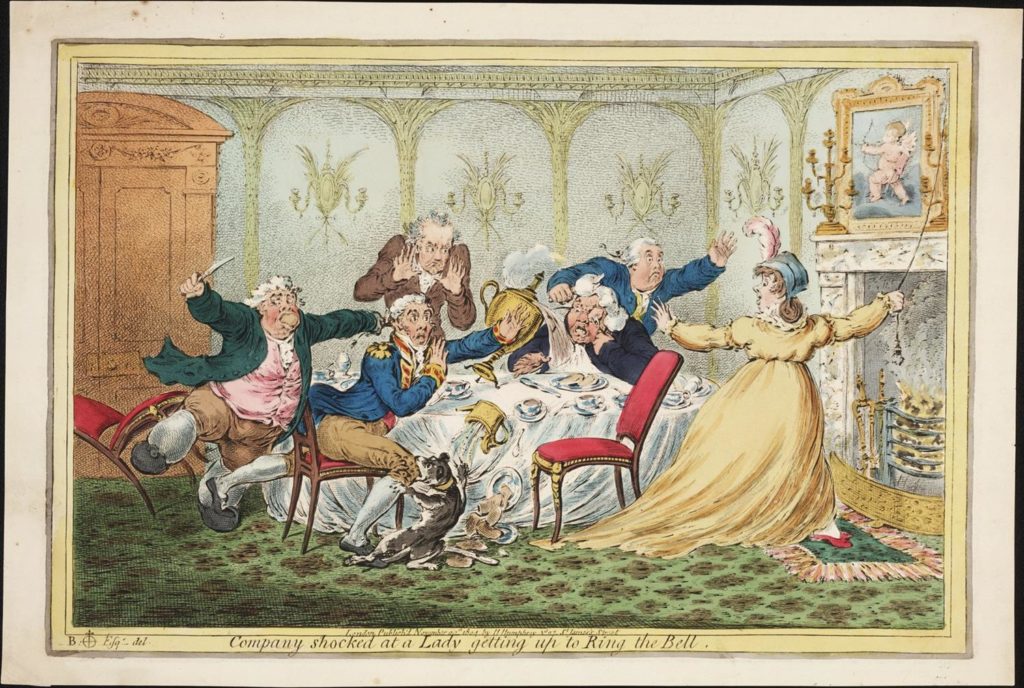 An interesting Gillray print which came out on this day in 1804. It shows a group of men who appear to be vying for the favours of the only lady present, presumably a wealthy widow. It is entitled ‘Company shocked at a Lady getting up to Ring the Bell’ and it appears on the Lewis Walpole site at Yale University, which quotes the British Museum online catalogue: ‘There is  violent disturbance in a luxuriously furnished breakfast parlour. The only lady present has risen from her chair to pull a bell-pull. The frantic efforts of five elderly men to stop her have produced a sequence of disasters. An urn overturns and pours boiling water on a fat man who puts a large lump of food speared on his fork into his eye. A man behind him, rushing to seize the bell-rope, spears the former’s wig with his knife. Crockery cascades to the floor, the contents of a tea-pot falling on a dog, who bites the knee of a man in regimentals; he leans forward, planting his toe on the gouty foot of a man behind. The latter, about to fall, grasps the officer’s pigtail, flourishing a knife, his mouth choked with food. A fifth man stands behind the table with raised hands and shrugged shoulders. The fare is boiled eggs, bread, and muffins. Over the chimney-piece is a picture of a fat Cupid firing his bow; his quiver is reversed, and one leg is transfixed with an arrow. The walls of the room are ornamented by gilt pilasters in the shape of palm-trees . Between them are empty candle-sconces decorated with palm-branches.

I like the scene of chaos at the breakfast table and the detail – of the wallpaper, the carpet and the fireplace. It is also the idea of – Shock, Horror! – a lady calling for the servant by ringing the bell pull – clearly a man’s job in a well-run household. It was published by Hannah Humphrey  exactly 215 years ago.