228 years ago my ancestor Richard Hall noted that following the passing of the Duke of Cumberland, there was a period of mourning at Court which was to last six weeks. The entry echoes the way that my ancestor always referred to the monarch as “good” King George. He clearly approved of the King, sympathised with him over his bouts of illnesses, and previously had remarked whenever there were signs of recovery. 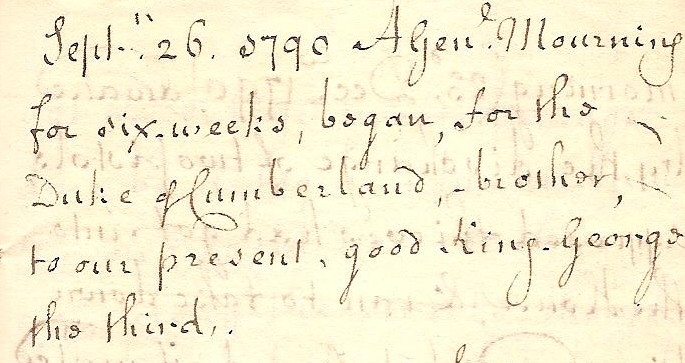 I am not quite clear why the period of general mourning was delayed, since Prince  Henry, Duke of Cumberland and Strathearn, actually shuffled off this mortal coil on 18 September. Perhaps it took a week for anyone to notice…. the Prince was the son of Prince Frederick, and was 44 at the date of his death. I like the man because of his colourful affairs. When caught in flagrante with the wife of Lord Grosvenor he was sued for damages in crim. con. and ended up having to touch up his brother (the King) for ten thousand pounds, plus costs of three thousand pounds. Lawyers, even then, didn’t come cheap!

On the debit side, he helped popularise Brighton by introducing the Prince of Wales to the delights of sea bathing and general carousing, away from the court of George III. I don’t think I can forgive him for that, because Brighton has been a nightmare for motorists ever since…

What else was happening to ancestor Richard Hall on This Day in History? Well, in 1780 it was “a fine day, very warm”, but Richard omits saying what he did with his time so he may well have been sitting around with his feet up, catching the late autumn rays! The following year was positively hectic, as he caught the Oxford Stage and got there,  in safety, in time for a spot of Supper. It was a fine day mind you, but “very Cold”. In 1782 it was the night of the Harvest Supper (“pretty fine day, mild”). The following year was “a delightful fine day” spent taking tea with Mr Freeman, dining with Mrs Snooke,and attending a sermon taken from Jeremiah  2, part 31. Things hadn’t improved by the following year when it was ” very wet in the morning, after, part dull, fine-ish with some rain in the evening.” So, nothing exceptional  ever happened on 26 September, and then to cap it all, Richard would have had to close his shop just because the Duke had popped his clogs….

It is however interesting to compare and contrast what Richard had to say, with the comments made by his brother-in-law William Snooke. Richard always wrote about the weather, whereas William never once tells us if it raining or shining. Instead, he busied himself on 26 September 1775 saying that he”went afield and had a syllabub instead of Tea”. That day he also mended the stucco, and paid two shillings to Thomas Reynolds for half a hundred crayfish which he had “had some time ago” and forgotten to pay for! The year before that he had attended Burford Fair, while “Mrs Dunn and Mrs Roper went to Cirencester in a chaise a little after 8 o’clock”. He appears to have had a full house that night, because he notes that  “Mr Willis and Mr Whiting also supp’d, and slept in our house in one bed”. (Mind you, I can still remember  the family putting up people in a shared bed, usually end to end!).

Good old William: he always jotted down if he had a memorably fine  meal, and on this day 1768 he “din’d on a Gammon of Bacon, Apple Dumplings and Fillet of Veal”. It must have put him in a good mood, because he promptly gave his wife a present of five guineas, paid one shilling and sixpence for a hare, and “gave an old man at Mr Freeman’s one shilling.”

Somehow I get the impression that William always enjoyed 26 September (and every other day of the year come to that) rather more than Richard did!

3 Responses to “26 September: a General Mourning for the brother of our present good King George III”