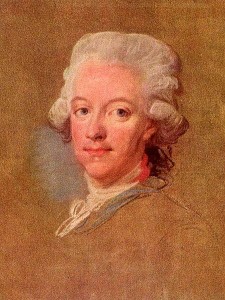 On 16th March 1792 Gustav, by the Grace of God, of the Swedes, the Goths and the Vends, King, Grand Prince of Finland, Duke of Pomerania, Prince of Rügen and Lord of Wismar, Heir to Norway and Duke of Schleswig-Holstein, Stormarn and Dithmarschen, Count of Oldenburg and Demenhorst, went to a masked ball at the Royal Opera House in Stockholm. And no, this  wasn’t a whole group of men; he was just one person. (Well, you tend to need a few titles like that when you have seized power in a coup d’etat, and have imposed an absolute monarchy on your peoples). Apparently he liked the dinner but not what followed: he was shot.

His assassin was Count Ankarstrom (acting jointly with others) and although the King appeared to survive the attempt on his life the wound in his back became infected and he died on 29th March. (I rather like his last words: “I feel sleepy, a few moments rest would do me good”).

The King, for all his extravagant foibles, was a cultured man who wrote plays and founded the Royal Swedish Opera, the Royal Swedish Ballet, the Royal Dramatic Theatre and the Swedish Academy. He also instituted the Royal Order of Vasa to reward  pioneers in the field of culture, mining and commerce. But he ruffled a lot of feathers, particularly with the nobility.

His demise sent shock waves throughout the royal families of Europe, not least in Britain where Gillray got in on the act with this print, first published in 1792, entitled “Taking Physick: – or – The news of shooting the King of Sweden”. It shows King George III seated on a latrine alongside the Queen, with Pitt rushing in with news of the assassination. All done ‘in the best possible taste….!’