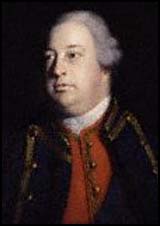 Today marks the anniversary of a man who has gone down in history as ‘The Butcher’ – a name oddly enough bestowed on him by his elder brother the Prince of Wales, for political reasons. The two did not get on…

To give him his actual name, William Augustus was born on 15 April 1721 in London and was the third son of George II and Caroline of Ansbach. The title ‘Duke of Cumberland’ was bestowed on him as a five year old. 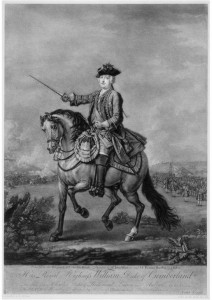 He became a soldier and achieved great popularity for his bravery in the (successful) Battle of Dettingen (1743), where he was wounded in the leg by a musket ball. He was immediately made a Lieutenant General and within two years was placed in command of the combined British, Hanoverian, Austrian and Dutch forces. His inexperience was demonstrated at the Battle of Fontenoy, where he was comprehensively beaten by France’s Marshal Maurice de Saxe on 11 May 1745.

The ‘martial boy’ had been depicted as a great military general in this 1744 engraving (shown courtesy of the British Museum).

Later in 1745 Cumberland was recalled to England to oppose the invasion of England led by ‘Bonnie Prince Charlie’ (Charles Edward Stuart, the Young Pretender, grandson of the deposed king James II). His appointment was hugely popular, particularly with the army. Up until then the rebel army had been highly successful in making use of ‘the Highland Charge’. At the Battle of Prestonpans in September 1745 and the Battle of Falkirk in January 1746, the Highland Charge caused havoc against the English army.

It was with this background that Cumberland marched up to Edinburgh and headed towards Aberdeen and then Inverness. By now he had insisted on the army being trained to combat the Highland Charge. The first row of infantry were to hold their fire until the enemy were just twelve yards away. While the front rank re-loaded, the second rank fired their guns. By the time the third rank had fired their guns, the first rank were ready to fire again.

Some of the English infantry had the benefit of using the more modern firelocks instead of the older matchlocks which were slow to re-load. Some of their guns had bayonets with which to dispatch any Scots who got too close – no match on their own for the Scottish broadsword but effective when used in conjunction with this style of fighting.

When the forces met at Culloden Moor near Inverness on 16 April 1746, the Highland Charge failed to make its mark. Some one thousand Scots died. After the battle Cumberland was purportedly in his tent playing cards. When he was asked for orders he wrote “No quarter” on the back of the nine of diamonds – a card still known to this day as the ‘curse of Scotland’.

How Richard Hall noted the victory at Culloden.

The resulting hunting-down and indiscriminate killing of men women and children in the Scottish Highlands left deep scars in much of Scotland – although interestingly the good burghers of Glasgow were so pleased with him that they promptly awarded Cumberland an honorary degree. The Highland Scots reviled him, and re-named the Common Ragwort (a noxious weed which gives off an unpleasant odour when bruised) as ‘Stinking Billie’. It is however quite wrong to attribute the naming of the flower ‘Sweet William’ to Cumberland by the English (as many have suggested) since the plant ‘Dianthus barbatus’ had been known by that name for several centuries.

‘Sweet William’ popularly but erroneously thought to have been named after Prince William. 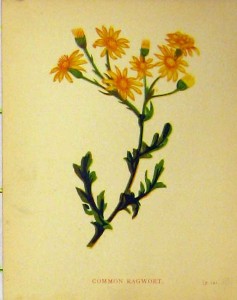 Cumberland returned to London a hero. He was awarded an additional £25,000 per annum i.e. over and above what he already received. His brother the Prince of Wales was alarmed at the popularity of his kid brother (and perhaps miffed because he himself had been denied a military role in the campaign) and he orchestrated the use of the epithet ‘Butcher’ whenever his brother was mentioned.

Cumberland went back to Flanders, still in charge of British forces, and he led them to comprehensive defeats at Laffeldt in 1747 (War of Austrian Succession) and at Hastenbeck in 1757 (during the Seven Years War). This last battle allowed the French to take over Hanover, and Cumberland was relieved of his role as commander-in-chief of the army.

He returned to England, his reputation tarnished, being met by his father George II with the words “Here is my son who has ruined me and disgraced himself”. It was a little hard, since the King had himself authorised his son to agree the surrender terms.

Cumberland resigned from all his military positions and largely retired from public life. He had time on his hands to indulge his favourite hobby, gambling: he gambled at bare kuckle boxing matches and he gambled at horse races. In 1750 his favourite boxer Jack Broughton was up against the unknown Jack Slack. The Duke placed ten thousand pounds on Broughton to win ( a truly vast sum for a single bout, at odds of ten-to-one ON i.e. staking ten thousand to win one grand) and then watched in horror as his champion was defeated and near-blinded by the young upstart Slack, after a mere quarter of an hour. 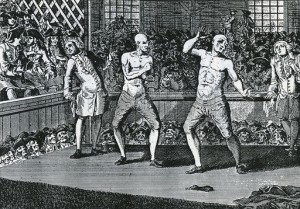 From time to time Cumberland meddled in domestic politics, apparently trying to get William Pitt restored to office. He was however in poor health – obese and never fully recovered from the wound to his leg, he suffered a stroke. His death on 31 October 1765 was sudden. He was 44 years old (the same age at death as two of his siblings). He is buried at Westminster Abbey and his name is especially remembered in the States where the Cumberland Gap as well as the Cumberland River, Mountains, and Plateau are named after him.

P.S. My thanks for the helpful link to http://londonist.com/2012/06/cavendish-square-gets-statue-made-from-soap.php where you can see an equestrian statue of the Duke, made out of …. soap!