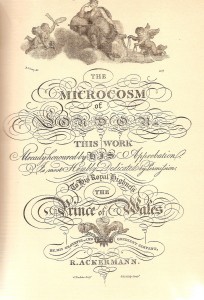 My Christmas present to myself this year was an old copy of Ackermann’s Microcosm of London – not the original i.e. first edition I hasten to add (I am not that generous, even to myself….). It first appeared in 1808 and is spread over three volumes, containing dozens of plates. Many of them are regularly dusted off and used – particularly the Pugin/Rowlandson collaboration showing the exhibition at the Royal Academy, or the rather repetitive  representations of the interiors of theatres such as Drury Lane, or Sadler’s Wells, the opera house or Astley’s Circus.

So I was interested to see that it contained a picture of the Albion Mills grain-store on fire – chosen, it would seem, largely because it gave Pugin the chance to show St Paul’s Cathedral in the background in all its glory. 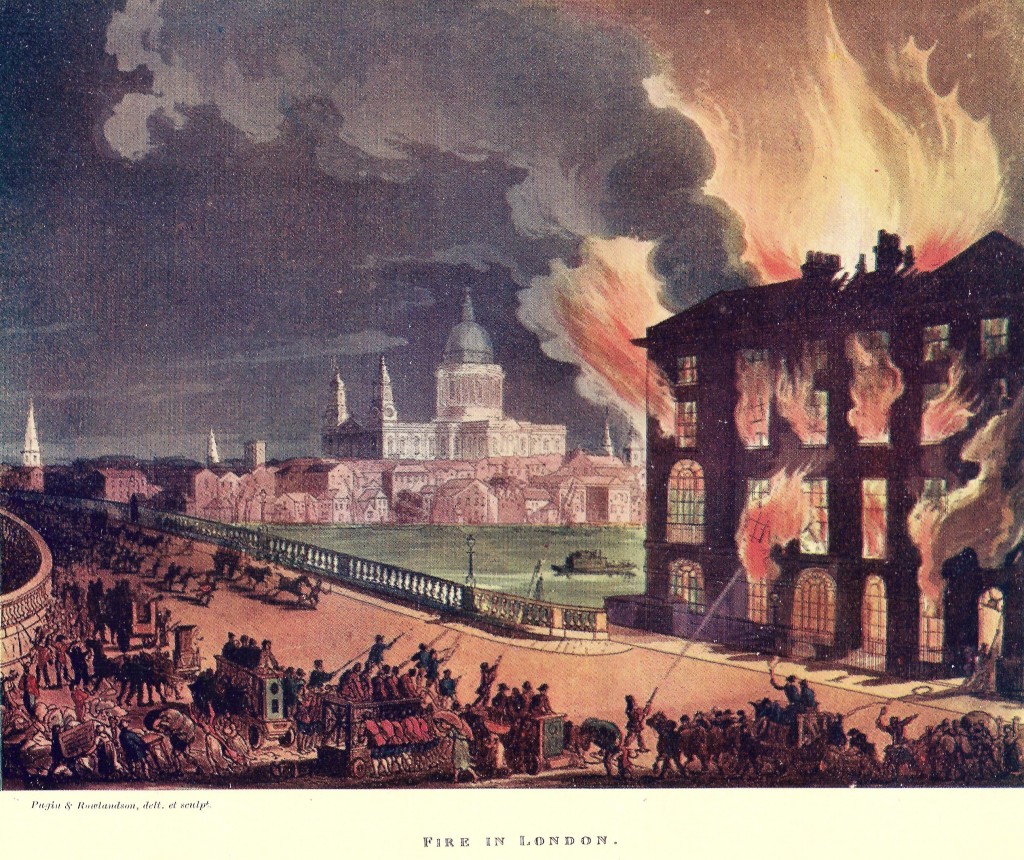 Or to quote Ackermann, “we have selected this from the many objects of a similar nature which frequently occur in the great metropolis, because the representation afforded an opportunity of more picturesque effect; the termination of (Blackfriars) bridge, the extensive area in front and St Paul’s in the back ground contribute so many interesting parts to a representation which is altogether great and awful.” 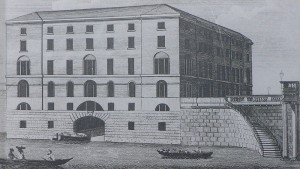 It was not a conflagration I had heard of, but it does serve as a reminder of how paranoid Londoners were in the decades and century after the Great Fire. Ackermann notes that in 1807 there were  375 fires in the City during the year, plus a further 356 chimney fires – and each one would have had the good citizens looking over their shoulders, praying that the wind would be in the right direction, checking that they had fire insurance in place – and above all hoping that the Thames would be at High Tide so that the pumps could operate. As it happened in the blaze on 2nd/3rd March the flames developed at low tide – the pumps could not get enough pressure to draw the water up to the blaze, and the roof caught fire and fell in before any serious attempt could be made to extinguish the flames. By then 4,000 sacks of grain had gone up in flames – just 30 sacks were saved. No-one was killed – but just imagine the thick pall of smoke reeking of burnt grain which must have drifted across London! Vile…

Ackermann records that “the fire raged with such un-abating fury that in about half an hour the whole of that extensive edifice, together with an immense amount of flour and grain, was reduced to ashes…the flames burst out in so many different directions and with such incredible fury and intolerable heat that it was impossible to approach on any side, till the roof and exterior part of the building tumbling in, completed the general conflagration in a column of fire so awfully grand as to illuminate for a while the whole horizon.”

There was a strong suspicion that the blaze may have been started deliberately – perhaps by rival mill-owners who saw their livelihood at risk because of this “super-mill” which had been  a wondrous tourist attraction since it opened in 1786. After all, if you had an old-fashioned windmill grinding your corn by the handful, how would you feel if the Industrial Revolution spawned a monster which could grind in ten minutes what it would take you ten hours? Luddites may have been at work… or it may just have been a case of someone not applying enough grease to the bearings, so that friction caused overheating. Whatever – the crowds were dancing in glee as the building was destroyed, some carrying placards supporting “mills for Albion – but not Albion Mills”

This drawing by S W Fores is entitled “A bon fire for the poor or the shame of Albion exposed” and shows the blaze as the work of the devil…. 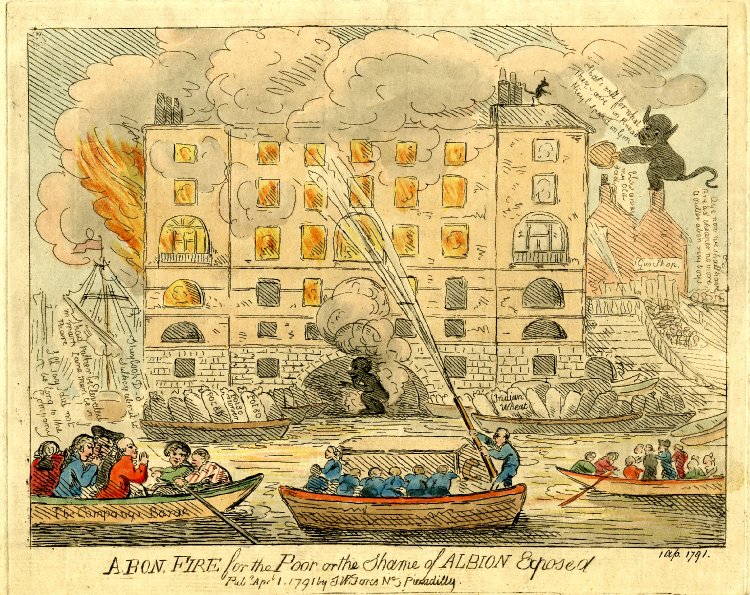 The premises had featured a rotary steam-powered flour mill designed by Matthew Boulton and James Watt, with grinding gears designed by John Rennie, and could produce something like 6000 bushels of flour an hour. It was one of those “dark, satanic mills” which inspired Blake, and the destruction of the mill gave rise to a popular song which included the verse:

“And now the folks begin to shout,
Hear the rumours they did this and that.
But very few did sorrow show
That the Albion Mills were burnt so low.
Says one they had it in their power,
For to reduce the price of flour,
Instead of letting the bread raise,
But now the Mills are all in a blaze,
In lighters there was saved wheat,
But scorched and scarcely fit to eat.
Some Hundred Hogs served different ways
While Albion Mills were in a blaze.
Now God bless us one and all,
And send the price of bread may fall.
That the poor with plenty may abound,
Tho’ the Albion Mills burnt to the ground.”