Just to show that there is nothing new about cross-dressing, here is a cartoon from  25 March 1780 entitled:  “A morning frolic, or, The transmutation of sexes” and is described as being ‘from the original picture by John Collet, in the possession of Carington Bowles’. It appears courtesy of the Lewis Walpole Library 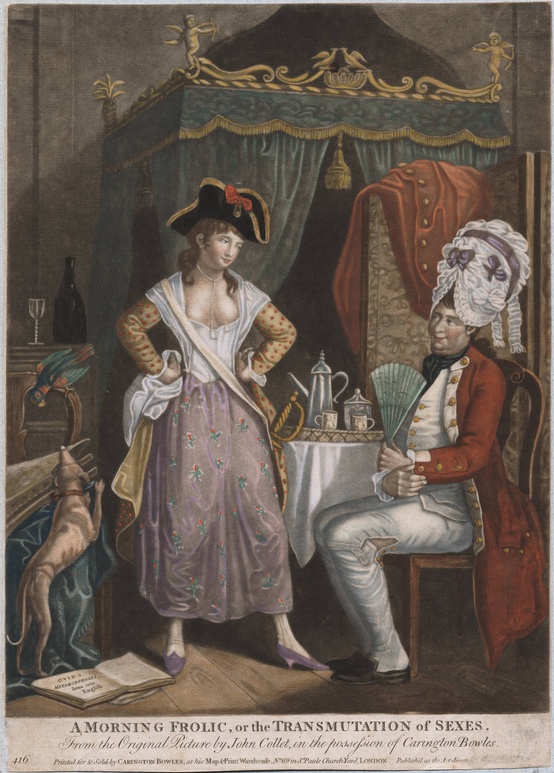 In practice genuine cross-dressers (as opposed to lovers wearing each others garments in jest) would have met in what were termed Molly houses, the most famous of which was Mother Clap’s Molly House on Field Lane in Holborn. Meeting places like this were not necessarily brothels but they were usually coffee houses or taverns with private rooms, where homosexuals and cross-dressing men could meet.

Mollies would dress in female clothing, assume a female identity and affect female mannerisms. On occasions the Molly Houses played host to a faux-marriage where a couple would ostensibly go through a form of wedding ceremony, accompanied by male ‘bridesmaids’ and with a friend playing the role of the priest. The ceremony had no legal validity whatsoever. Molly houses were to be found in most of the larger cities, and were a forerunner of the modern gay bar (such as this aptly named one in Manchester).

Sodomy was however illegal and carried the death penalty. Margaret Clap, better known as Mother Clap was therefore taking a huge risk in running what appears to have been a male knocking shop in the two years up to 1726. Apparently the premises had been under surveillance for a year or more. In February of that year a raid took place and some 40 men were arrested. Of those, three were later found guilty of sodomy and were hanged (Gabriel Lawrence, William Griffin, and Thomas Wright).

Margaret a.k.a. Molly was sent for trial in July 1726. She argued. ‘I hope it will be considered that I am a woman, and therefore it cannot be thought that I would ever be concerned in such practices.’ The court felt otherwise and she was sentenced to stand in the pillory in Smithfield, was fined, and ordered to serve two years in prison. In practice there were enough members of the public who abhorred sodomites, and who appear to have assaulted her so viciously in the pillory, that she apparently died a week later of her injuries.

It is considered possible that her final act was a contribution to the English language – her name (Clap) which became a slang term for gonorrhoea.

And to end with, my favourite cross-dresser of the period, a Frenchman exiled for the latter part of his life in England and rejoicing by the name of Charles-Geneviève-Louis-Auguste-André-Timothée d’Éon de Beaumont (but better known as the Chevalier d’Éon). He was born in 1728 and died in 1810, Here he is pictured in 1792 by Thomas Stewart, He spent the first 49 years as a man, and the last 33 as a woman. 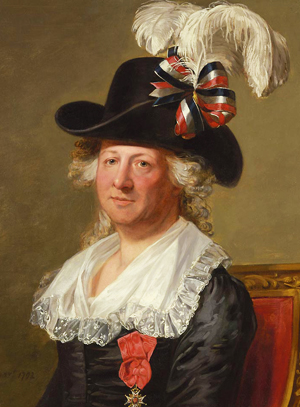 9 Responses to “From cross dressing to Molly Houses – the 18th Century gay scene.”