Let us spare a thought today for a man who changed the face of gardening, a man responsible for all those beautiful football pitches cut with meticulous patterns, the man who helped retired sea captains to make their lawns into striped perfection: Edwin Beard Budding. Yes, that’s right, not exactly a household name for a man who invented the lawnmower. And also, for good measure, the adjustable spanner… 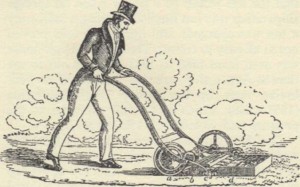 Beard was an engineer born in 1795. He lived in Stroud in Gloucestershire – an area bristling with woollen mills. He was familiar with the bladed reel used at the local mill belonging to Listers, used to trim the irregular nap from the woollen cloth. He reasoned that he could use the revolution of a roller, linked to gears, to turn a series of curved blades in order to trim grass. And having experimented in his back garden, he took out a patent on 31 August 1830. The original machine had a width of nineteen inches but he opted for two different sizes – one designed for park keepers and the other for ‘gentlemen.’ As Budding himself said “Country Gentlemen may find, in using my machine themselves, an amusing, useful, and healthy exercise.”

The smaller machine sold for seven guineas, the larger one for ten. They started to be made early in 1831 by two pioneers under licence from Budding – John Ferrabee at his Phoenix Foundry near Stroud, and James Ransome of Ipswich.

Up until then grass cutting involved either sheep or a man-with-a-scythe, so your average household did not feature a lawn. Suddenly Suburban Man could emulate the Gentleman Landowner – he too could have his spot of green, meticulously trimmed and rolled. He did not need the help of a herd of sheep, or get in a team of reapers – he could go out and get fit while pushing his shiny new mower!

Examples of the first mowers can still be seen in places such as the Stroud Museum and at the Science Museum in London – this picture appears courtesy of their website here.

The first examples were difficult to propel and therefore a bar was added at the front– so that it was a two-man operation, one to push and one to pull. Nevertheless public gardens and parks found it highly efficient – the head gardener at London Zoo, a Mr Curtis, announced that ‘with two men, one to draw and another to push, the new mower did as much work as six men with scythes and brooms’.

So, as we start up our mower-bot and set it trimming our verdant acres, or climb aboard our trusty ride-on mower, or plug in the hover-mower, let us raise a glass of Pimms to the man who started us all off on this merry-go-round: Edwin Budding!