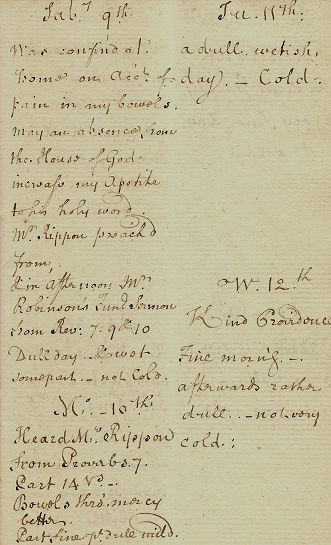 Poor Richard Hall. This day in 1773 was the Sabbath, and normally wild horses would not have prevented him from making the journey (on foot) from his home at Number One London Bridge, over the bridge to Southwark, to attend the service conducted by the Baptist Minister in Carter Lane.

“Was confin’d at Home on account of pain in my bowels. May an absence from the House of God increase my apetite to His Holy Word.”

Poor Richard, he was for ever suffering from “oppress’d wind”, or pains in his bowels. 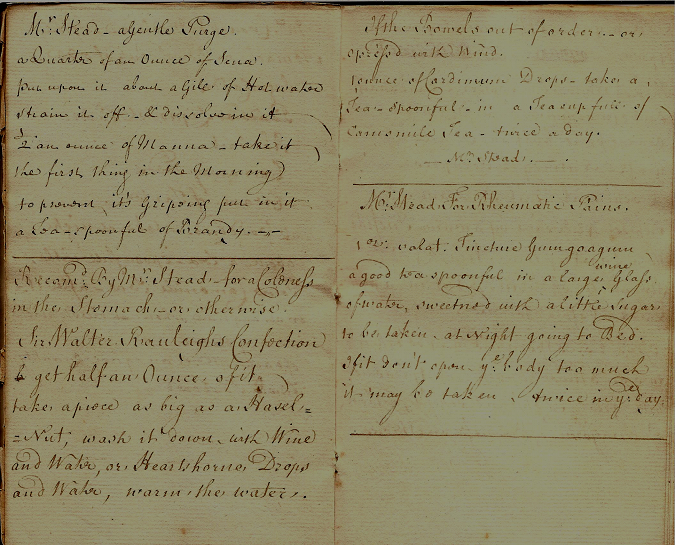 Fortunately he knew exactly what to take for his ailment: the entry below calls for a quarter of an ounce of Senna, “put on it about a Gill of hot water” to be washed down first thing in the morning with a little Brandy. “Cardimum Drops” knocked back with a tea-cup full of camomile tea (twice a day) sounds O.K. but off hand I am not sure what went into “Sir Walter Rauleigh’s Confection” (but hey, you knocked it back with a glass of wine, so it must have been  beneficial….).

Maybe Richard just made do with  Mr Crouch’s medicine for Bowel Complaints: “sugar candy, Liquorish Powder, Rhubarb, Carraway Seeds, Cream of Tartar, all finely powdered and taken at night” (again, with camomile tea). Whatever, Richard records that the next day his “bowels, through Mercy, better.”  Which is nice for all of us…