One of the things which helps me identify with my ancestor is food – after all, he went to great lengths to record what he ate, what he drank and so on, and although he frustratingly never says whether he liked a particular meal – or bottle of wine – at least I can share with him a love of eating (and drinking, come to that)!

In one of his booklets he recorded this epigram about meals:

He also wrote a lot about avoiding what he called “flatulums” – in other words, beans which made him suffer from wind! He consumed rather more red meat than I am partial to – and rarely any vegetables – and he consumed prodigious quantities of port (which I loathe because it gives me gout). Other than that many of his ‘receipts’ i.. recipes are worth trying, although his cakes and tartlets have so much sugar in them they are barely edible! 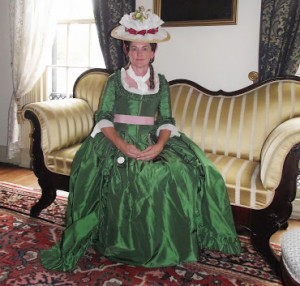 Anyway, all this is a rather long-winded introduction to a splendid book which has been written by Kimberly Walters. Kim has agreed to do a guest-blog for me tomorrow, but by way of introduction to her I would explain that she lives in Virginia and spends a lot of her free time attending re-enactments, cooking on an open hearth fire, giving demonstrations, and teaching others how to cook using Eighteenth Century utensils and ingredients.

She has brought out a lovely book, entitled “A Book of Cookery” and it is described as being “by a Lady” (and who am I to doubt it!). It contains “above Three Hundred Receipts made at Hearth, Suitable for an Elegant Entertainment, or Common Fare for Preparing and Dressing Every Thing Suitable for Drinking and Dining at Any time of the Day including Receipts for Lent, Household Cleaning, and Remedies for Ailments.” 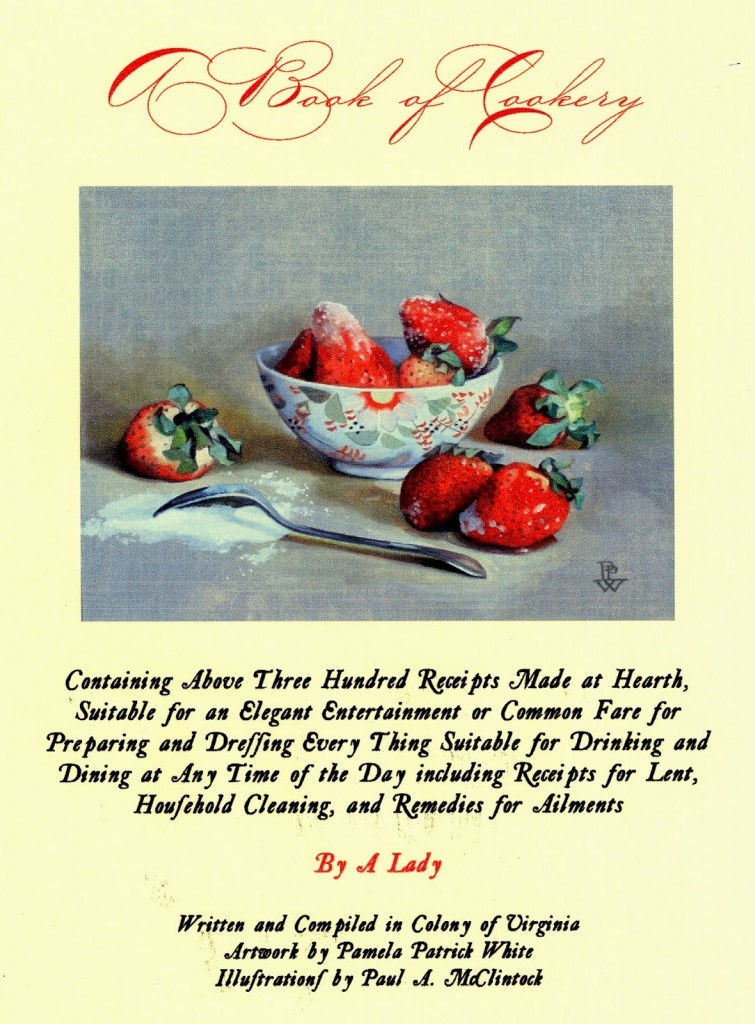 It really is a fascinating book, full of interesting facts and recipes, made all the more interesting because you know that they work. Kim has tried them, and indeed  started a hearth cooking guild at Historic London Town and Gardens in Maryland. The great news is that it is available via Amazon both in the UK (here) and in the States (here). Personally I don’t think it is any great loss that it is not available on Kindle – who wants to be reading Georgian recipes on an e-reader, for goodness sake! Instead you get 348 old-fashioned pages which you can thumb through, ear-mark, and enjoy. There are sections about selecting and buying produce, preparing food, how to place food on the table, what utensils were used, how to carve meat, as well as cookery terms and definitions. There are also several hundred recipes as well as those useful tips as to how to get rid of stains from silk, how to make a wash for the face and so on. I was particularly impressed to see that the ‘cure’ Kim gives for an upset stomach is almost identical to the one Richard Hall recommends (“take an ounce of beef suet and half a pint of milk …”)

There are a couple of lovely reviews of the book on Amazon, including these:

“Kim’s dedication to authenticity and her love of the colonial period and its food comes through in A Book of Cookery​ ​. This collection of recipes (or receipts to be more accurate), is the must-have for historic sites, people doing living history, food historians, and even the adventurous home cook…the best thing about Kim’s book will be eating the large variety of foods contained therein.” – Rod Cofield, Executive Director, Historic London Town and Gardens

“A Book of Cookery is a wonderful guide for novices and experts alike who love history, hearth cooking or anyone who dwells in the 18thC. It’s a refreshing book that combines all of the great recipes and techniques of the era in one easy to read guide…one handy book where it’s all at the ease at your fingertips.

Her commitment to historic preservation and love of the subject shines through…ideal not just for historical books, but also for anyone who wants to enjoy fresh cuisine from farm to table…”
Chef Walter Staib, Award winning Chef, Author, and TV Host of “A Taste of History”

What comes across is that it isn’t just for re-enactors – anyone interested in the 18th Century will find something to tickle their fancy. Kim also has her own website – she makes and sells period jewellery (sorry, jewelry!) in order to raise funds for her beloved rescue horses. It is called “K Walters at the sign of the Gray Horse” and you can find it here. It comes as no surprise that Kim describes herself as ‘an avid horse woman, animal lover, amateur historian, and re-enactor’. She is a member of the National Society Daughters of the American Revolution, and is currently a member of the Fincastle Chapter of Louisville, Kentucky.
Tomorrow she gets a chance to say a bit about what got her interested in what I believe the Americans call “historic foodways.”

One Response to “A Book of Cookery – Part One”