As promised, today’s guest post is by Kimberly Walters, author of the excellent “A Book of Cookery” which I mentioned yesterday. Over to you Kim! 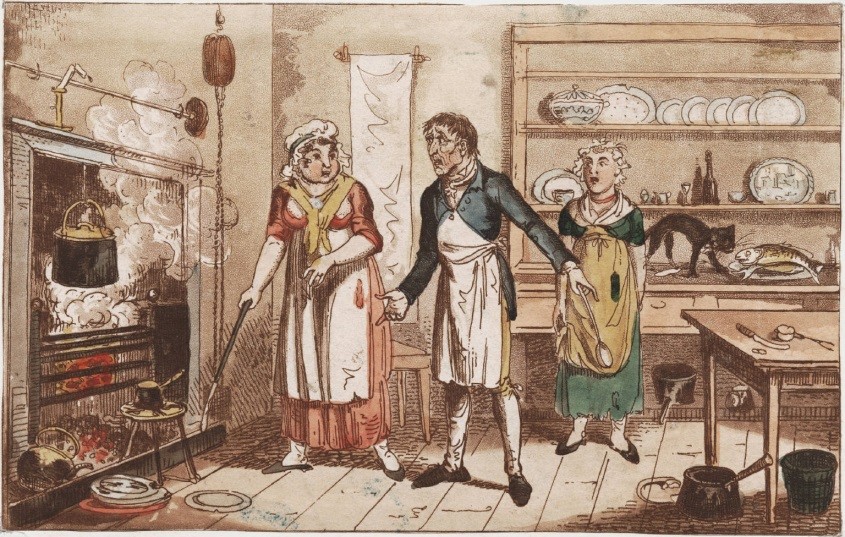 Hospitality for those in the 18th Century was well known and a way of life. I first became interested in historic foodways several years ago while watching a Jane Austen movie – most in particular “Pride and Prejudice.” I really just wanted to sit at a table elaborately decorated, dressed in my finest gown, and eat and drink as they did. It wouldn’t hurt if Mr. Darcy was there too, would it? However, I was also curious as to how they cooked, what did it take to do it? How many did it take to cook some of those huge meals? How long to prepare and eventually serve that food on the table?

That had me reading the cookery books of the time. I did not always understand the terminology, and I found the measurements obscure. After delving into it more and finding a dictionary from 1775 on-line, understanding that they cooked over a fire, the equipment used seemed unwieldy and made of toxic metals, and the combination of ingredients of some recipes (also known as receipts) did not sound in the least bit delicious. Receipts are defined by Mr. John Ash’s dictionary of 1775 as being “…a prescription of ingredients of any composition.” That had me reading more and trying to find the answers. Once I really started to delve into this, I became almost obsessed with reading more and more. I did find that there was a lot of plagiarism as there were no copyright laws back then, so many books repeated themselves with the same receipts. A popular cookery book of the period, whereby I found an original which is in my small collection is “The Compleat Housewife: or, Accomplished Gentlewoman’s Companion.. By E. Smith.” 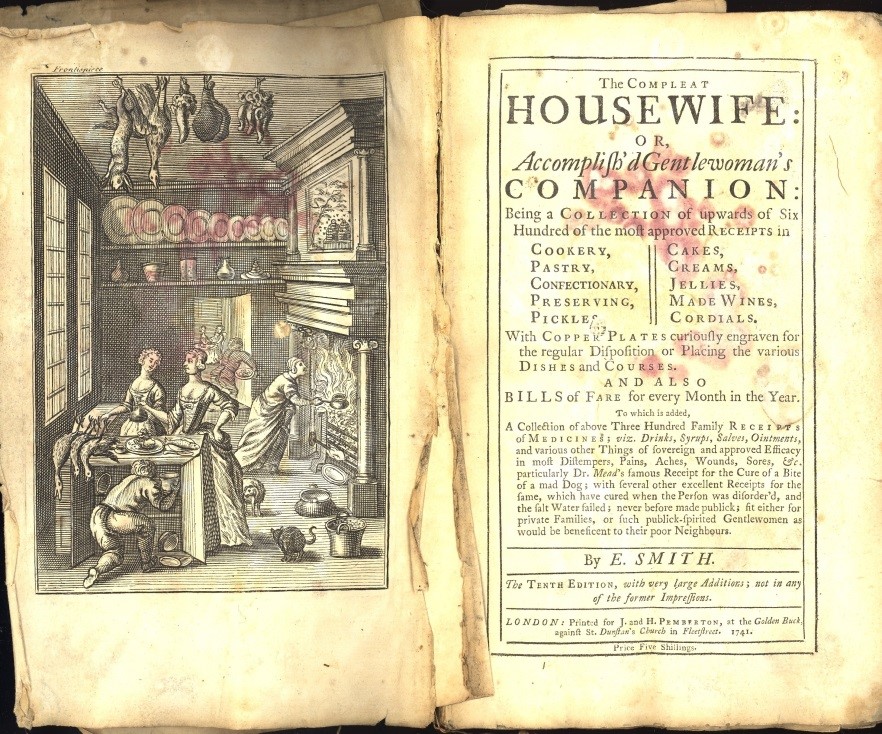 Other cookery books that I have read and studied are those written by A Lady (Hannah Glass), Miss Eliza Leslie, Mrs. Harrison, Mrs. Raffald, Mr. Kidder, Mr. Vernal, T. Williams, and Mrs. McLintock to name a few. I own originals of some of these as well. There is nothing like holding a book and wondering who else has read from its pages – who also owned it?

So, I am questioning more and more. Why did the recipes have what seemed enormous amounts of ingredients? So I decided to figure out why. I have come to the conclusion that it was all about social status. The more you have on the table, the more ways it was cooked is how they showed the wealthier they were. This allowed the family to purchase or plant more as they had more help in which to do so and cook the items. This could have been in the form of slaves, indentured servants, convict servants, etc. The 18th and early 19th Century was all about etiquette, manners, and courtesy.

What appeals to me about Georgian dining is the type of dishes made. Some sound familiar, and some are very different and do not in the least seem appetizing. However, once the food was set on the table, it was done in a very deliberate way. I remember growing up and Sunday dinner was a special event for my family. We would cook a nice meal, transfer the food to the nice family china, and it was all laid on the table very nicely. We did this on special holidays and birthdays as well. This was a practice that I still do today. Back then, the dishes were laid out on the table symmetrically. It was a well-staged area where the dishes were placed accordingly. So, if you had one type of dish at the head of the table, you will have a similar at the foot, and so on. In some illustrations, you will see that a soup would be placed at one end of the table to be removed, and in its place is noted another dish which normally was a meat. I have been amazed to see the number of dishes served and how many courses they suggested. You can also find information in the diaries, Wills, papers, and newspapers if you wanted to find out more individual likes and dislikes versus a general cookery book. These works can mention and list the type of food being imported, equipment that was used, food and drink sold, types of vegetables being grown, or utensils and inventory left for those who passed away. I delved into reading and researching and was not disappointed with what I found. There is so much to know, and every bit as rewarding when you make a dish as they did and taste it. Even better when dressed in the right clothing. 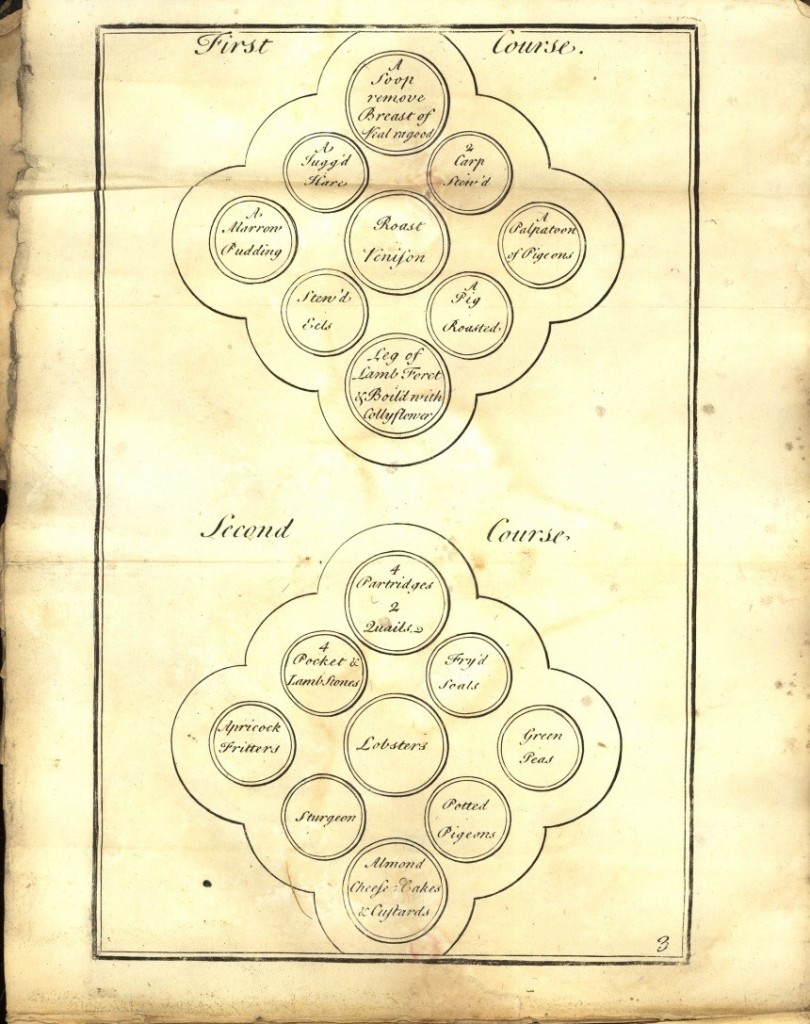 No article about food can be left without providing a receipt. One of my favorites, which are provided in my book, is sure to please.

To Make an Apple Tansy.

TAKE three pippins, slice them round in thin slices, and fry them with butter; then beat four eggs, with six spoonfuls of cream, a little rosewater, nutmeg, and sugar, and stir them together, and pour it over the apples; Let them fry a little, and turn it with a pye-plate. Garnish with lemon and sugar strew’d over it. NOTE: Pippins are a type of apple either yellow or green. You can substitute any tart apple you wish. 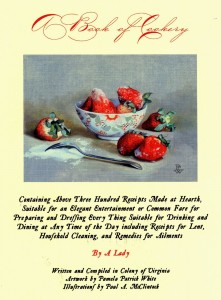 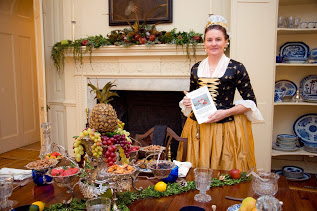 You can learn more about my book on my website, K. Walters at the Sign of the Gray Horse . I also sell historically inspired jewelry and all proceeds go to support my four rescued and one Colonial Williamsburg adopted horse.

Thanks, Kim, and a reminder that ‘A book of Cookery, by a Lady’ is available via Amazon.co.uk and via Amazon.com

One Response to “A Book of Cookery – Part Two”