It may not have escaped the attention of the more observant readers that I am a sucker for 18th Century boxes such as the coromandel jewellery box on the right – and containers, especially tea caddies. You may also have surmised that I spend a considerable amount of time trawling the ever-fascinating website of Hamptons Antiques, so it will come as no surprise that today features …. a lovely new website from Hampton Antiques, which in turn features a splendid old tea caddy made by a man called Henry Clay, who was a successful businessman in Birmingham and who died in 1812.

Clay had originally been an assistant to one of the pioneers in making things out of papier mache, by the name of John Baskerville. In the 1740’s Baskerville,  a merchant who had made a name for himself designing typefaces etc and producing fine quality books, had started to imitate the highly polished objects being imported from Japan, using lacquered papier mache. It became known as ‘japanning’. The style became very popular and by 1772 Henry Clay had learned enough to be able to set up on his own and in that year patented a new process for making a ‘new improved paper-ware’ in sheet form or, as the patent describes it: “making, in Paper, High Varnished Pannels or Roofs for Coaches, and all Sorts of Wheel Carriages, and Sedan Chairs, Pannels for Rooms, Doors, and Cabbins of Ships, Cabinets, Bookcases, Screens, Chimney Pieces, Tables, Teatrays, and Waiters.”

The process involved “pasting several papers upon boards… put in a stove sufficiently hot to deprive them of their flexibility, and at the same time are rubbed over or dipped in oil or varnish, which so immediately drenches into them as to secure them from damps… they are capable of being sawed into different forms, and planed as wood…. then coated with colour and oils sufficient to make the surface even, and then japanned and high varnished.”

The patent lasted thirty years i.e. until 1802 and after that date a plethora of smaller manufacturies popped up in Birmingham, Wolverhampton and indeed throughout the West Midlands. They helped popularise the use of the material in everyday items ranging from trays to boxes, small cabinets, dressing cases and the like.

One of the design features Clay introduced was inserting cameos, manufactured by Josiah Wedgwood, into the sides of caddies, knife boxes and the like. He attracted the attention of Matthew Boulton, who wanted to go into partnership with him, but Clay declined. After all, he was by now able to style himself ‘Japanner in Ordinary to His Majesty and His Royal Highness the Prince of Wales’. He appears to have worked closely with Robert Adams – or at least, he decorated many items in a style we associate with Adams. I was intrigued by two caddies sold by Bonhams within the last couple of years, which show, I suppose, that condition is everything. 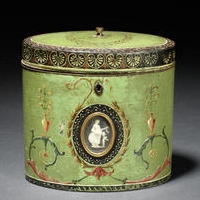 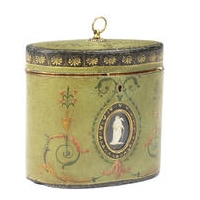 Both images appear courtesy of Bonhams and are their copyright.

But my real favourite is the one on Hamptons site which they describe as being made in 1780, is four inches high, and is described by them as being “A rare Single Tea Caddy by Henry Clay made of papier mache inset with white cameo panels depicting classical figures with glazed gold engraved surrounds, gold handle and escutcheon. The tea caddy is decorated with gold palmette borders and edges. It comes with a working lock and tasselled key” 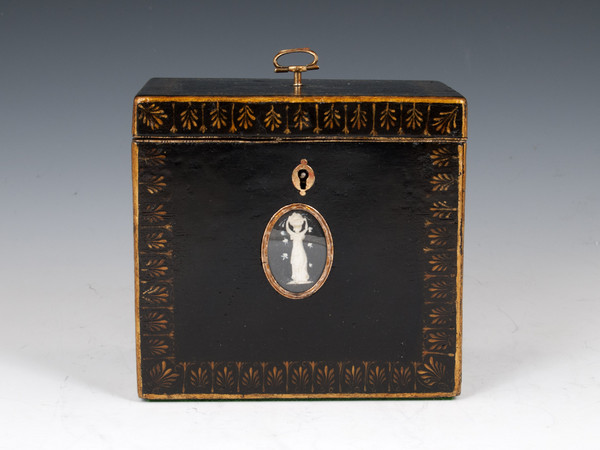 Based on the figures achieved by Bonhams the price of £4750 looks to be extremely keen – I mean, you know, you absolutely know, that the tea would have tasted exquisite when spooned out from this little gem! 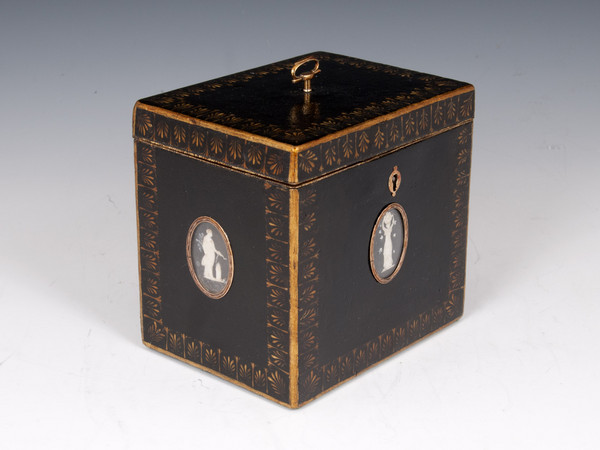 So, if you have a spare moment, wander over to the Hampton’s web page and be amazed at how much time you can happily spend exploring their Aladdin’s Cave of on-line delights. Ah well, Christmas is coming…