A Clerical Alphabet – more from the pen of Richard Newton 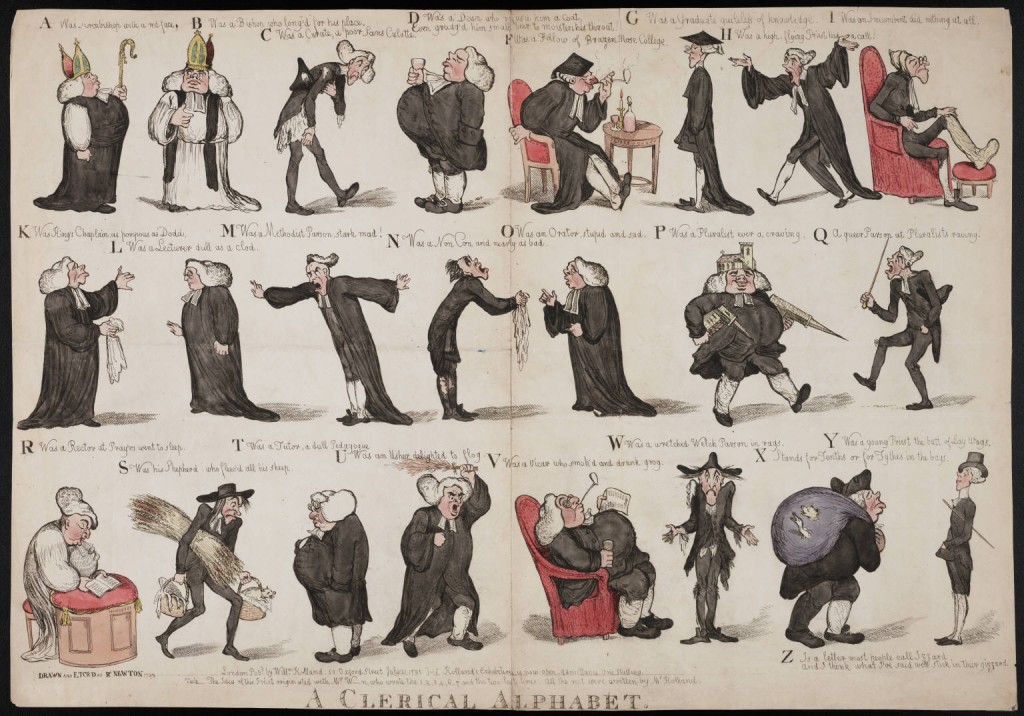 I like this Clerical Alphabet from Richard Newton, showing a wonderful set of clerics illustrating the following verses :

A was archbishop, with a red face

B was a Bishop who longed for his place

C was a curate, a poor Sans Culotte

D was a Dean who refus’d him a Coat, Even grudg’d him small beer to moisten his throat.

F was a Fellow of Brazen-nose College

G was a graduate guileless of knowledge

H was a high-flying Priest had a call!

I was an Incumbent, did nothing at all

K was Kings Chaplain as pompous as Dodd

L was a Lecturer dull as a Clod

N was a Non Con and nearly as bad

O was an orator, stupid and sad.

P was a pluralist, ever a-craving.

R was a Rector at Prayers went to sleep.

S was his Shepherd who fleec’d all his sheep.

T was a Tutor, a dull Pedagogue

U was an Usher, delighted to flog

V was a vicar who smok’d and drank grog

W was a wretched Welch parson in rags

X stands for tenths, or tythes in the bags

Y was a Young Priest, the butt of Lay Wags

Z is a letter most people call Izzard, and I think what I’ve said will stick in their gizzard!

No, I am not sure what happened to the letter “E” (or “J” come to that) but the point is that the doggerel verse shows a healthy contempt for the whole pack of clergy – high or low, they were all attacked as being worthless. Richard Newton often pilloried the clergy, and made fun of their foibles, and he drew this alphabet in 1795, when he was just eighteen years old. Sadly, he was to die three years later, a brilliant caricaturist with a marvelous sense of humour, an immense talent who feared and respected no-one. I did a blog about him back in October 2012 and you can find the link here

As ever, I am grateful to the Lewis Walpole Library for the use of the image, which appears on their site here. If you visit it you can use the “zoomify” feature and examine all the figures in greater detail. I recommend it  – some of them are great fun!