Idly leafing through back-numbers of The Gentleman’s Magazine (as one does) I came across this obituary from November 1787: 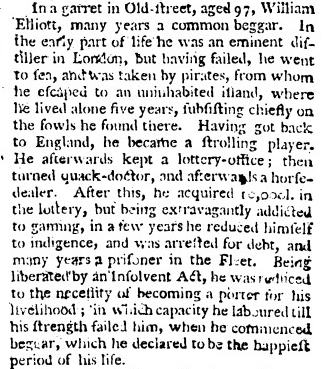 I rather like the idea of William Elliott living to 93, and recording that his happiest times were when he was a beggar. It reminded me of the lovely portrait by Nathaniel Hone The Elder of a beggar (by the name of James Turner). 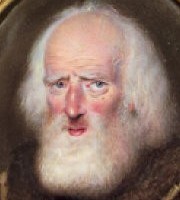 Interesting though that Elliott not only ran a Lottery Office – but was also a lottery winner… £10,000 would have been more than three quarters of a million pounds in modern terms.

Mind you, he had quite a life – running a distillery; eating chicken for five years while  marooned a la Robinson Crusoe; getting a job as a strolling player; becoming a quack doctor; dealing in horses; ending up as a porter. Not many people get to try quite so many careers – you cannot say that the Eighteenth Century didn’t provide opportunities for entrepreneurship and  a change of job!

One Response to “A contented beggar goes to meet his Maker, November 1787”