A crackling pussy – always good for seeing in the dark.

I have a terrible confession: I am not particularly a cat-person. That, against a background of knowing that a huge majority of my followers on Twitter are moggy-lovers! I don’t dislike cats: I just don’t understand them. Or rather, I didn’t until I read the Gentleman’s Magazine for 1754. It explains:

“The phaenomenae of electricity, which has so many surprising properties, seems to be of two sorts, natural and artificial. The last is to be obtain’d from all bodies naturally susceptible of it, as glass etc in which the property lies dormant till excited to act by friction, or some other violent motion.

Natural electricity is common almost to all animals, especially those destin’d to catch their prey by night; cats have this property in the greatest degree of any animal we are acquainted with; their furr or hair is surprisingly electrical. If it be gently raised up it avoids the touch till it be forc’d to , and by stroking the backs in the dark, the emanations of electrical fire are extremely quick and vibrative from it, follow’d by a crackling noise as from glass tubes when their electrical atmosphere is struck.

It appears to me of singular use to animals destin’d to catch their prey in the dark: they give a sudden and quick erection of their furr, raises the electrical fire, and this, by its quickness running along the long pointed hairs over their eyes, and illuminating the pupilla enables them to perceive and seize their prey. It would be worth while to enquire whether all the wild sort that catch their prey with the paw are not endow’d with the same vibrations of electrical fire; the cat is the only domestic animal of that species but such a discovery in the ferocious kind would still be an additional demonstration of that infinite wisdom so easily discoverable in the minutest executions of all his works, and so perfectly adapted to a proper end.”

The article is interesting in illustrating the 18th Century preoccupation and fascination with electricity, from its cause to its effects. I rather like the idea of cats seeing in the dark because of their ‘natural electricity’.

Mind you, while looking for illustrations to go with this post I came across a highly inappropriate, un-funny (and downright cruel!) picture of a cat piano, apparently designed in 1650 by one Athanasius Kircher a 17th century German Jesuit scholar. 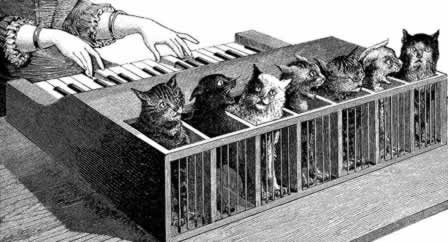 According to the Neatorama site “The piano was designed to raise the spirits of an Italian prince who was too stressed out. The musician would select cats whose voices were at different pitches then arrange them in the pens accordingly. The piano delivered sharp pokes into the tails of the cats”. (No, not funny, definitely in bad taste, definitely worth including….). I mention it as an example of how cruelty to animals was endemic: more so because cats had always been associated with witchcraft.

3 thoughts on “A crackling pussy – always good for seeing in the dark.”