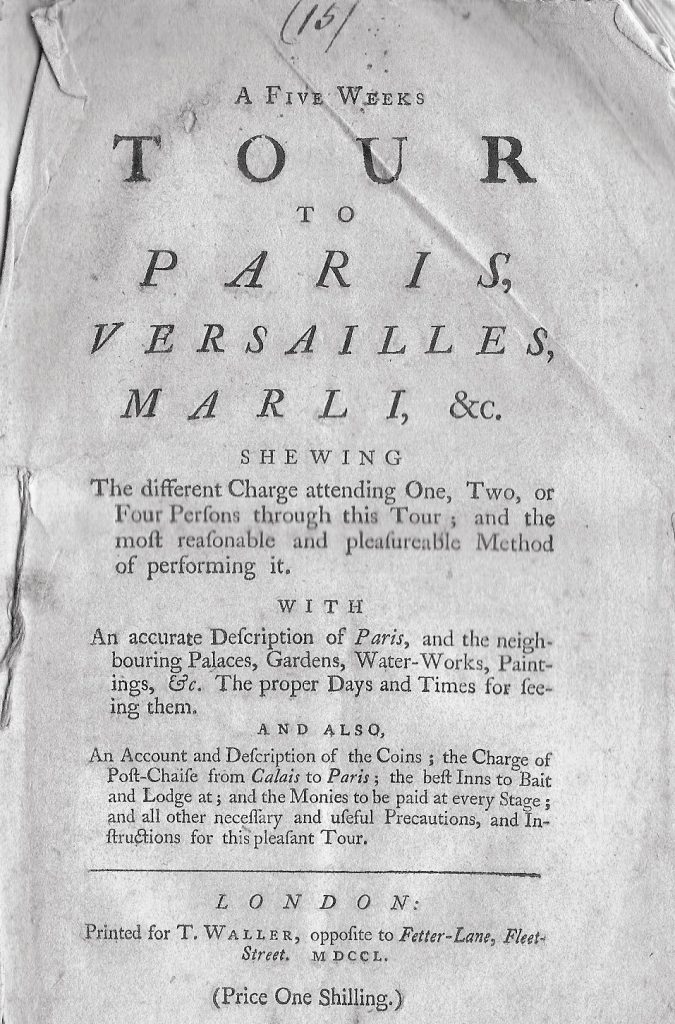 In my current book,  ‘In Bed with the Georgians, Sex Scandal and Satire’ I mention the small-but-beautifully-formed ‘pocket rocket’ known as  Gertrude Mahon. As a teenager she decided to run away to France to get married to an impecunious Irish fiddle player, much against her mother’s wishes.  Bow Street runners were sent to intercept the pair before they could leave Dover, but the resourceful Mr Mahon invited his captors to have a few libations with him before he returned with them to go before a judge. He promptly drank them both under the table thereby enabling him to escape to France with young Gertrude. Once in Paris he got  married, got Gertrude pregnant, and then left her for another woman.

It raises the question: just what was it like travelling over to France, both in terms of the Channel crossing, and in terms of packing, safety, cost and so on? My ancestor Richard Hall kept a delightful little guide describing a five-week trip across the English Channel in order to visit Paris and Versailles. Richard  obviously operated a sort of lending library for his close friends, since this volume was numbered 15 and he refers to loan books, by number,  in some of his papers.

The original booklet was published in 1750, priced one shilling, and although the name of the author is not given, the booklet ends on page 38 with the words “I am, Dear Sir, your most assuredly, A.Z., Middle Temple, June 15, 1750”. I thought it might be fun to reproduce part of it, since it gives a vivid picture of what travel was actually like in the middle of the eighteenth century. All aspiring historical novelists please note – this is a chance for you to tell it as it really was….! 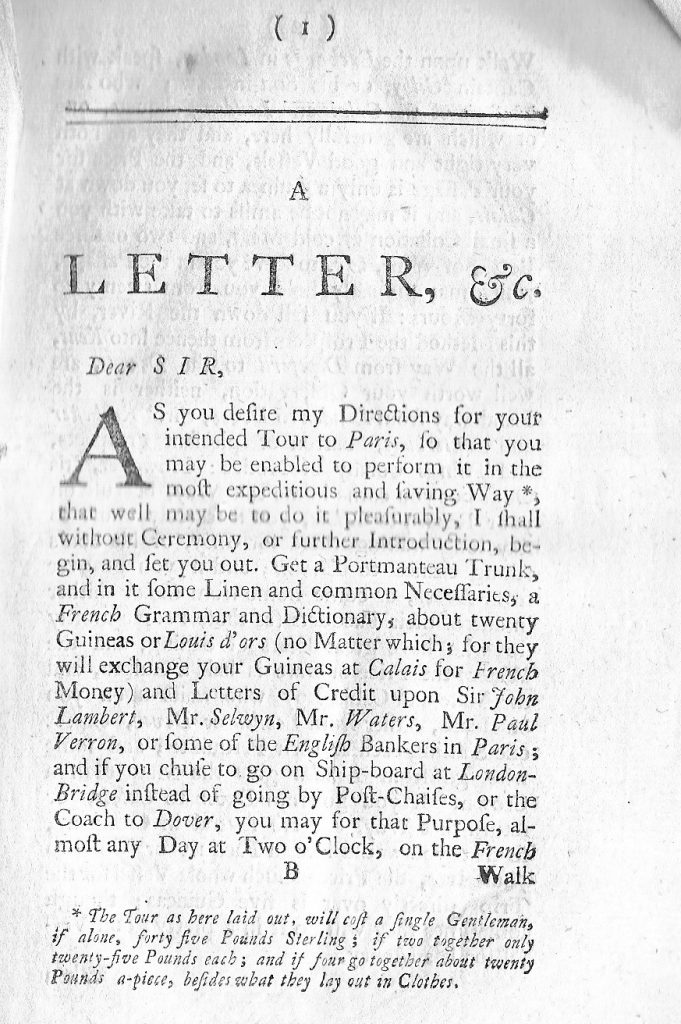 So, you started with your portmanteau trunk, acquired your ‘common necessaries’, got yourself a French dictionary and called on your banker for a letter of credit. The writer recommends taking twenty guineas in gold, and as the note at the foot of the page explains, he is assuming a budget of £45 for a single gentleman, £25 each for a pair  travelling together, and a very reasonable £20 a head for four people. Clothing costs were extra… 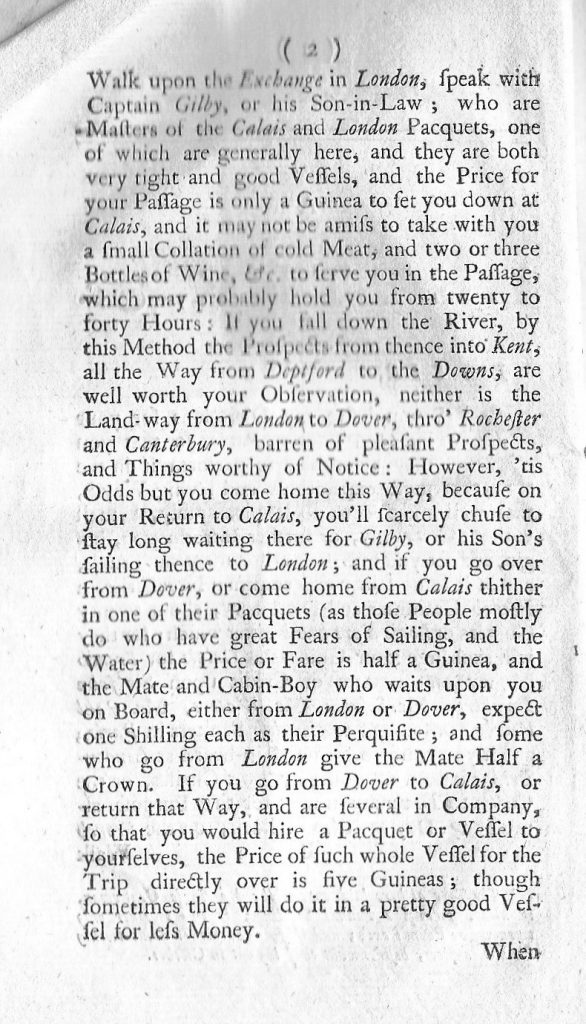 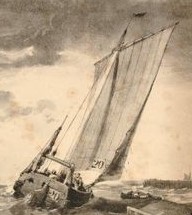 Extract from R P Bonnington’s ‘Seascape off Calais’, showing a packet boat approaching the shore, and shown courtesy of the British Museum.

For one guinea you could cross the Channel in a ‘tight but good vessel’ and it was handy to be reminded to take a collation of cold meat with you in case the pangs of acute hunger set in. The three bottles of wine probably helped with the tedium. And for those who preferred not to have to travel with hoi polloi, there was much to be said for forking out the five guineas and having the vessel all to yourselves. 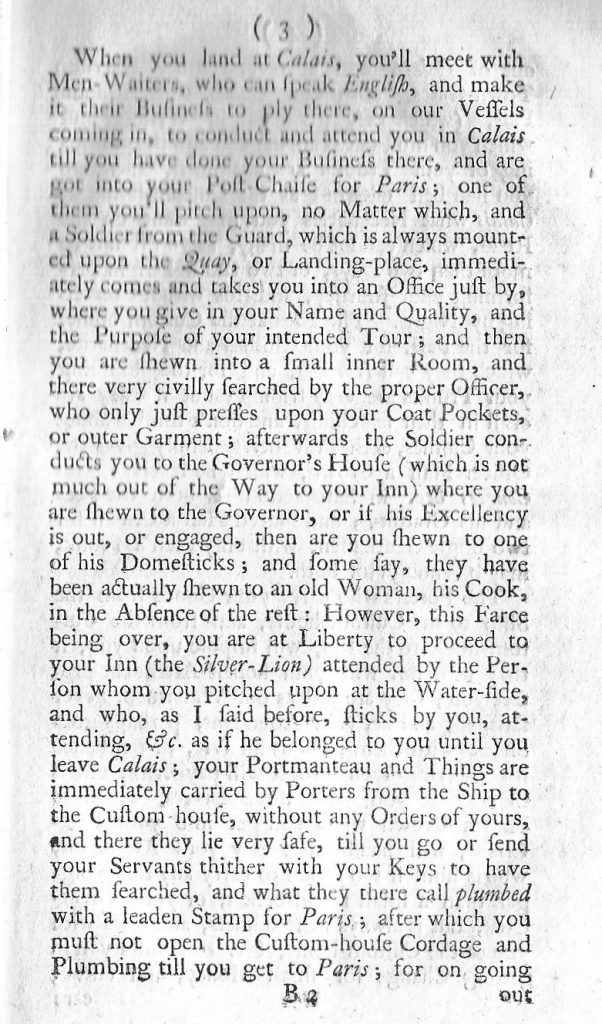 It is interesting to hear about the procedures for clearing French customs (apparently the Governor’s aged cook was known to perform the checks of your person, presumably giving you a good pat down with a wooden spoon….). I was intrigued at the idea that your suitcase would then be searched before being plumbed, i.e. sealed with a lead seal so that you were unable to access the contents before you reached Paris. 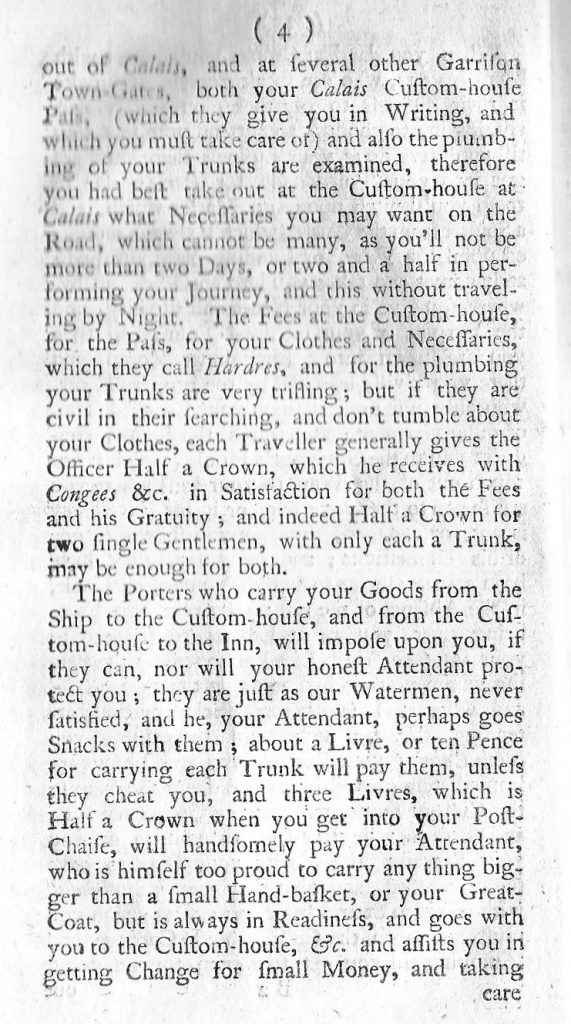 Handy to know that half a crown slipped into the pocket of the guy at the Customs House was all that was necessary, plus a few pence to the porters and half a crown (three livres) to your attendant ‘who is himself too proud to carry anything bigger than a small hand-basket.’ 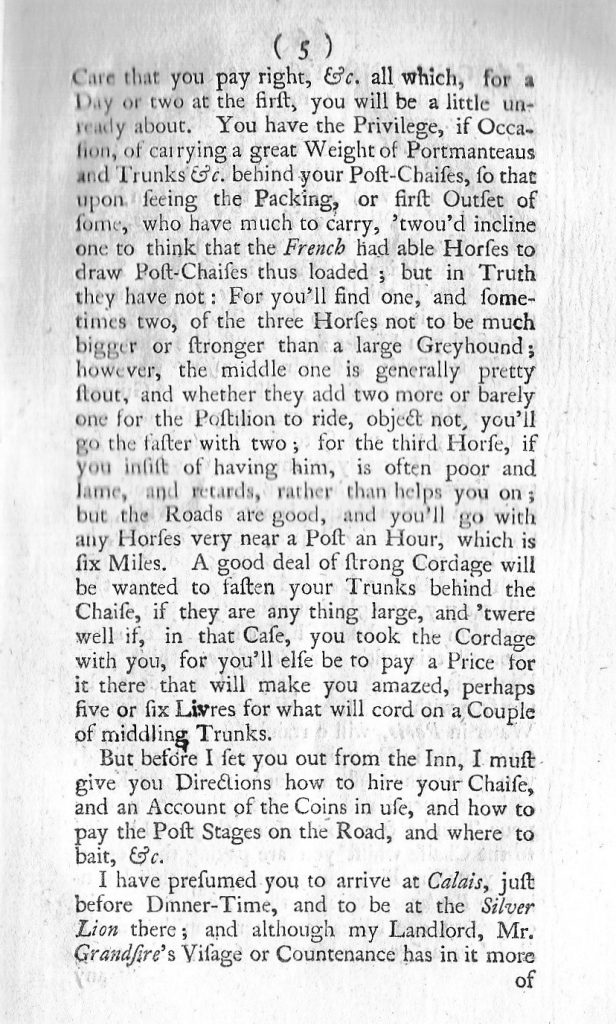 A nice comment about French horses – whereas in England we are used to good strong steeds, the French will palm you off with something little bigger than a greyhound, so goodness knows how it will cope with a heavy trunk. But in general, with good roads, you will cover six miles in the hour – described as being ‘one post’. Handy hack: always carry a lot of binder twine with you because the French will rip you off if you try and buy cordage to tie your cases down. 5 or 6 livres for a ball of string! Outrageous conduct, quite appalling…. 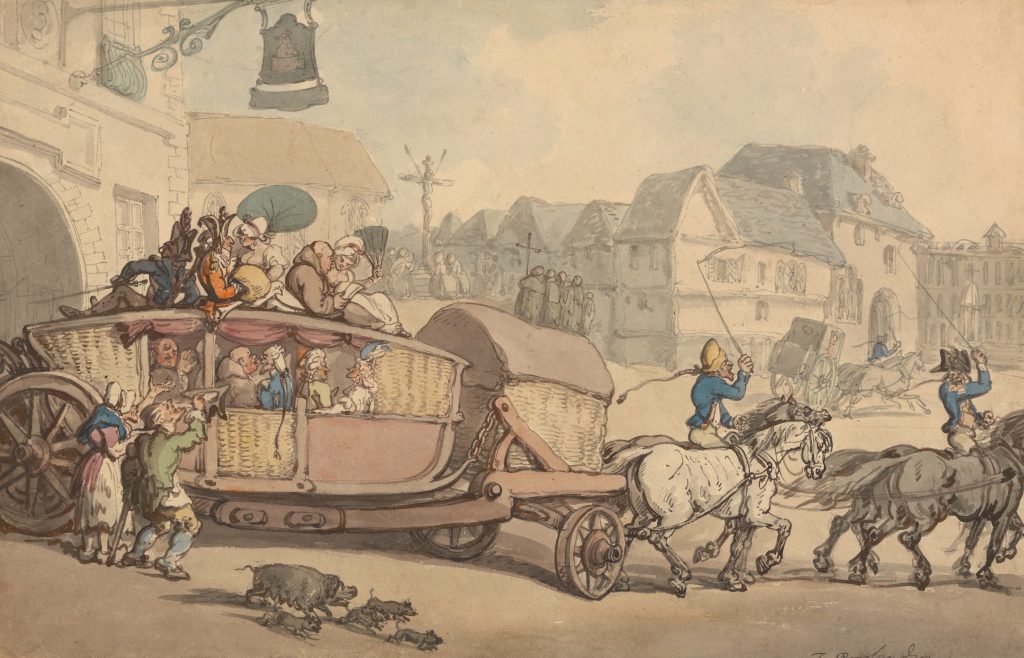 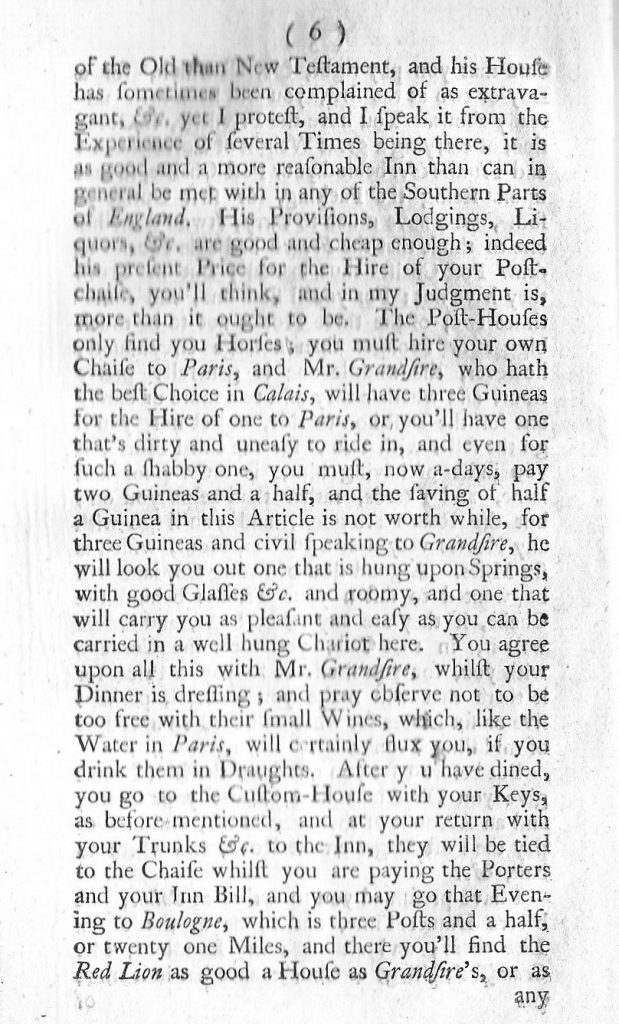 Good to know that the Silver Lion and, later on, the Red Lion, are to be recommended, and Handy Hack number 2 is to insist always on a  carriage  that is hung upon springs and with good glasses (ie clear windows for looking out at the French scenery). I rather like Handy Hack number 3 – ‘pray observe not to be too free with their small wines, which, like the water in Paris, will certainly flux you, if you drink them in draughts.’ Oops, gotta run… 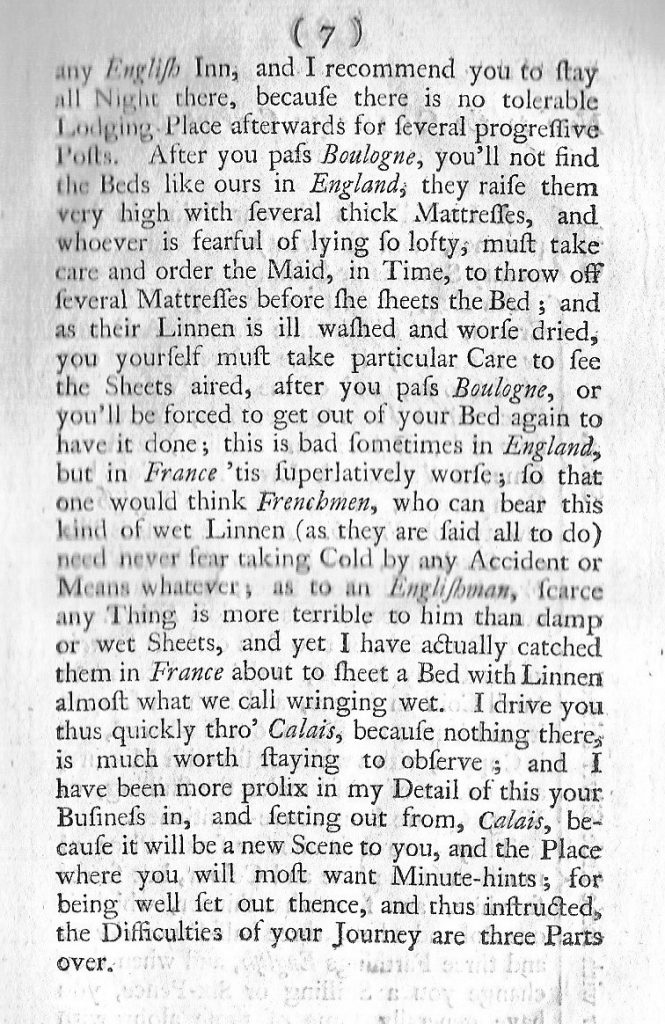 Ah the joys of French bedding! Handy Hack number 4 has to be that you insist on seeing that the linen on the bed is properly dried and aired before use. I like the mental image of French beds piled high with mattresses, topped with damp, clammy sheets. I recall reading a similar complaint in a letter from one of George I’s ministers, complaining about wet bedding on his frequent trips accompanying His Majesty back home to his beloved Hanover.

At this point I will leave off the summary of the “do’s and don’ts” when travelling through France: next time. French money, French wines – and the appalling state of French loos.

My ancestor’s paper cut-out of a coach and four

One Response to “A journey across the Channel, and a visit to Paris in 1750.”