I like this Thomas Rowlandson print from 1811 entitled  ‘A Midwife going to a Labour’. 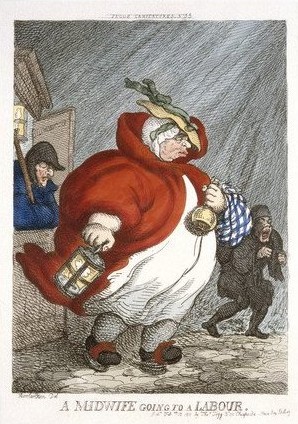 A night watchman is half asleep in his box, a chimney sweep scurries down the street with a big yawn, and the corpulent midwife hurries through the howling gale with her lantern in one hand – and her bottle of booze in the other.  She wears pattens (metal shoe blocks to protect against the filth of the cobbled streets) and a be-ribboned straw hat over a white cap.

The Eighteenth Century was marked by a long-running dispute between trained male doctors and midwifes and their more traditional female (untrained) counterparts. Cruikshank reflects this division in his half-male, half-female midwife, drawn in 1783. 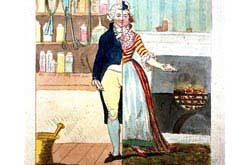 While looking for material for this post I came across these solid silver ‘forceps’ – apparently late eighteenth or early nineteenth century, and probably French.

They show the stork, its body wrapped in a snake, signifying medicine; opening the forceps reveal a baby cocooned safely inside. Apparently they would probably not have been used for delivering the baby, or even cutting the cord, but for threading ribbons  through baby garments after they had been removed and then washed. They appear on the site of Phisick – Medical Antiques.

Forceps were originally invented by  the Chamberlen family of doctors – Huguenots who fled to England from France in the latter half of the 16th Century. Astonishingly they kept their invention secret within the family for 150 years, One of their number, Pierre Chamberlen, became obstetrician-surgeon to Queen Henrietta, wife of King Charles Ist. So secret was the device that it would be brought into the birthing room in a box; everyone apart from the mother would have to leave the room; and the mother herself was blindfolded! When Pierre died his widow hid his collection of forceps under the floorboards of their home, and they remained concealed there for  the next 130 years! But by the middle of the Eighteenth Century  forceps were widely available, as seen in these two images from  the The Royal College of Obstetricians and Gynaecologists: the first shows the Chamberlen forceps in their collection, and the other is a print by William Smellie from 1754 showing the forceps in use. 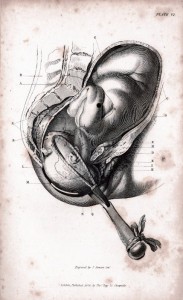 4 Responses to “A Midwife going to a Labour”