I came across these two prints on the ever-excellent Lewis Walpole site while looking for something entirely different! They are both the work of Elias Martin, an artist who died in 1818, but the first was published by William Humphrey on 6 February 1772 and the other, published by Richard Marshall, followed ten days later. 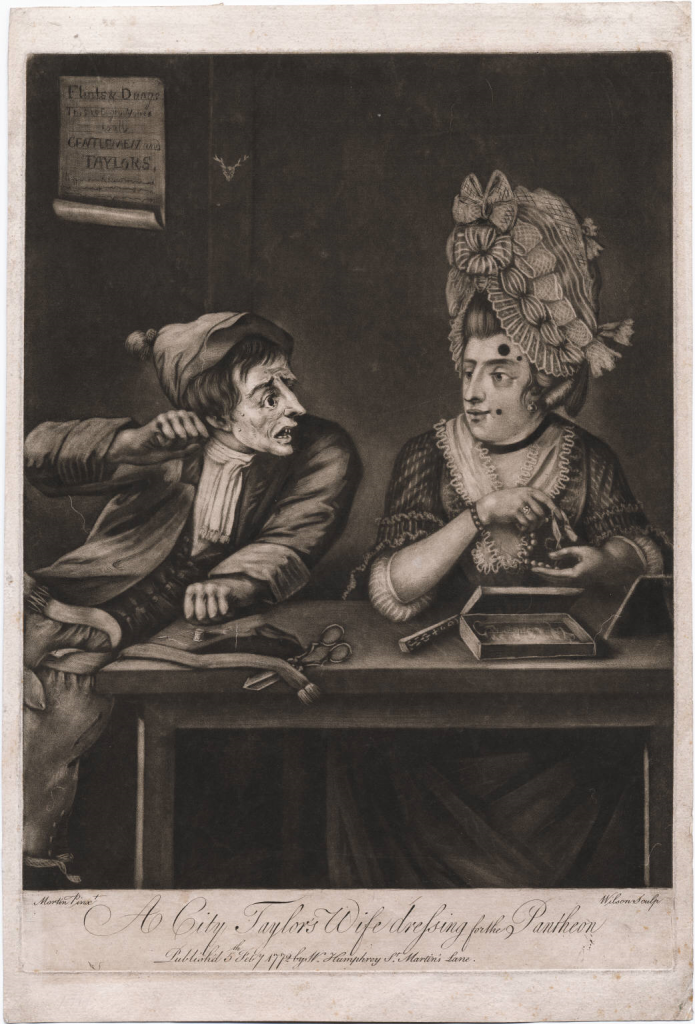 The first print is entitled ‘A city taylor’s wife dressing for the Pantheon’ and it shows the soon-to-be-cuckolded tailor, holding a pair of half-made trousers on his lap, watching in despair as his wife prepares for a night on the town. His fists are clenched, his face etched with despair. He wears outdated clothing – complete with night-cap.

His wife, on the other hand, is dolled up to the nines. She is sporting ever-so-fetching patches all over the place, she is putting on a necklace which has just been taken out of a box, and she is rocking a hat which is ever-so a la mode. No matter that she looks like a hideous raddled old bag – she is on the pull! The house is humble, the furniture spare, and on the wall is an advertising placard – and a chalked figure of a pair of antlers, signifying a cuckold. No-one seeing the print would have been in any doubt as to the intentions of the wife! 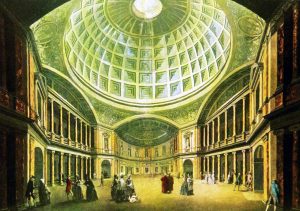 Interestingly the Pantheon, just off Oxford Street, opened its doors on 27th January 1772 – just a week before this was published – so it was referring to somewhere very much in vogue. In practice the Pantheon had a very exclusive clientele in its early days – admission was at the invitation of a peer of the realm only. 1700 people drawn from the very highest echelons of society paid fifty pounds each to attend the opening night. For that first season, tickets only got you in to assemblies, without dancing or music, held three times a week. In later years the Pantheon was the venue for masquerades, balls – even operas, and became much more egalitarian. The point about the print is that in its early days, there was no way that the wife of a tailor would gain admission – the trollop clearly had ideas above her station…..

The second print was entitled The Suspicious Husband – apparently the title of a play by Dr Benjamin Hoadly. According to the Lewis Walpole site:  “A fashionably dressed young woman sits at a writing table as she seals an envelope with her stamp while her maid, standing in front of the table, waits attentively. A picture on the wall behind them depicts Cupid flying with an envelope in his hand. From behind a curtain on the right, a man peers into the room, curious and wide-eyed.” 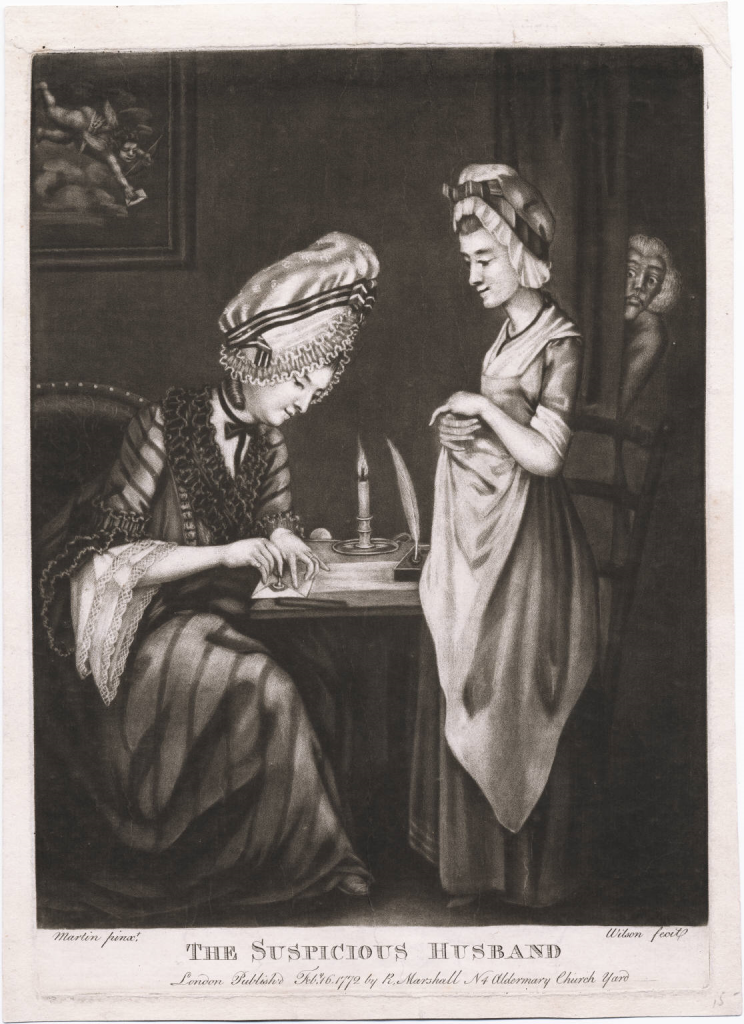 I rather like the details – the attentive maid, the flickering candle, the wax seal being impressed from the lady’s ring, the lady’s left hand holding the letter firmly but delicately in place, the bar of wax on the table, the quill pen….

I know very little of the artist, Elias Martin. Wikipedia has him as a Swedish landscape painter who came to London in 1770 and became an Associate of the Royal Academy. I am not quite sure why he used his talents on producing drolls like these, but there you go! I suspect that he needed the pin money….