I have blogged before about the mania for riding those excruciatingly uncomfortable ‘hobbies’ or velocipedes, and recently came across a delightfully scurrilous etching on the British Museum site. It is called “Exercising a hobby from Wales to Hertford!!,” and is by the British printmaker J Lewis Marks. It shows the Prince of Wales (later, King George IV) and Lady Hertford (Isabella Anne Ingram Shepherd, 2nd Marchioness of Hertford) riding one of the new velocipedes. 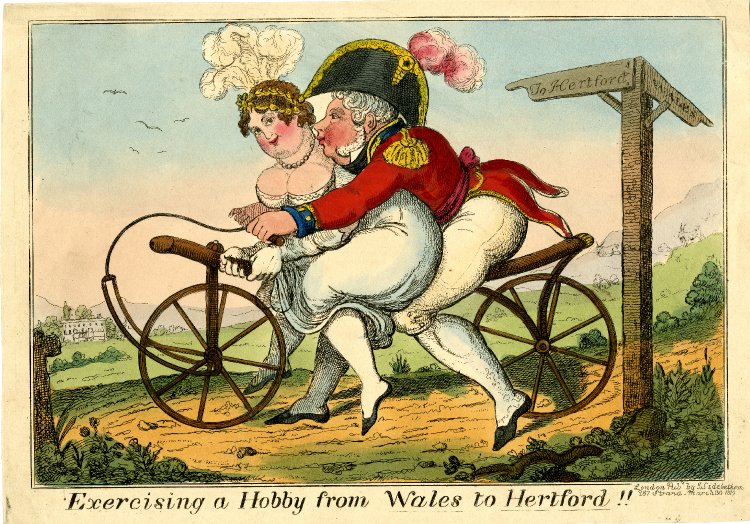 It came out in March 1819 when the craze for riding hobbies was at its highest and the British Museum site, without a hint of irony, describes the scene thus:

“She bestrides and grasps the pole, but sits on his knee, he leans against her to hold the handle-bar. He wears military uniform with cocked hat and pumps; she is very décolletée, and wears a triple ostrich plume in her hair.”

The coat of arms of the Second Marquess.

Given the highly suggestive depiction of ‘the pole’, the unflattering portrayal of the Prince, and the public cuckolding of the Marquess of Hertford,  it is amazing that the caricaturists got away with it – especially when you remember that the writer Leigh Hunt was fined heavily, and sent to prison, for having the audacity to publish a poem in which it was suggested that the Prince was  fat, and covered in blubber like a whale….

Anyway, a month later the publishers came up with a modified version based on the first print, but just as explicit: 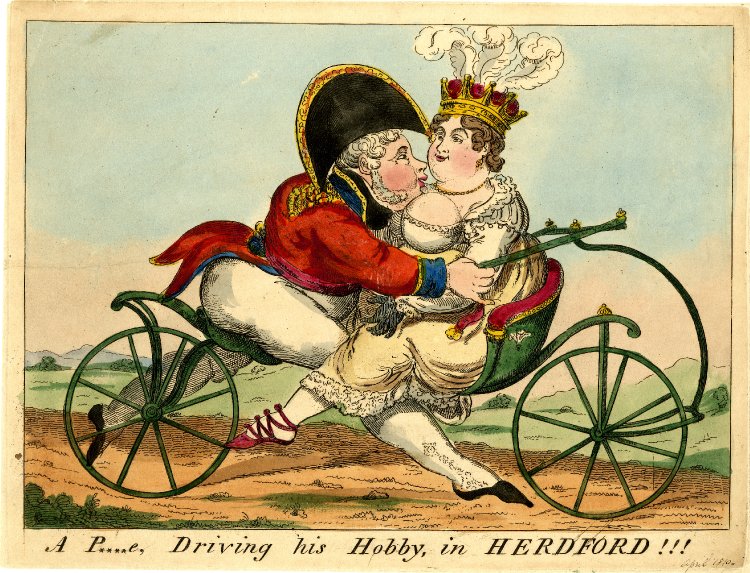 The artist was obviously warming to his theme, and brought out a third depiction of the couple, this time with a reference to flagellation. 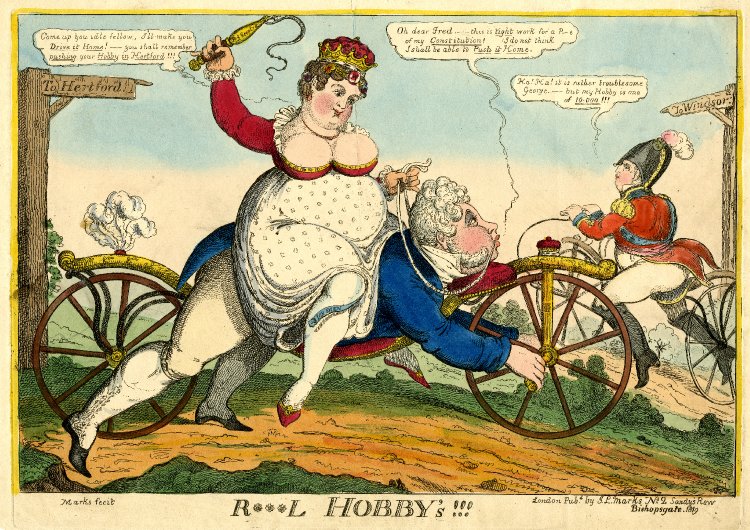 In a print called ‘R…l hobbies’ the voracious Lady Hertford remarks “Come up you idle fellow. I’ll make you drive it home” as she whips her royal lover. He remarks to his brother the Duke of York, passing by in the opposite direction,that ‘he doesn’t think he will be able to push it home’.

And I thought ‘Spitting Image’ was near the knuckle!

John Lewis Marks was a satirist, etcher and publisher who was active in London between 1814 and 1832. His earliest etchings were usually published by Tegg, but in 1817 Marks opened his own publishing house in Bishopsgate. During the following years he sold and published his etchings from establishments in Fleet Street, Picadilly, Finsbury and Smithfield. Much of his notoriety arose from a series of prints made in the early 1830’s (at the time of the Reform Bills)  with some flagrantly racist comments aimed at the German-born wife of the King (William IV). Previously, he had published a number of prints  which were decidedly anti-George IV in his various conflicts with his wife (the unloved and unlovely  Caroline of Brunswick).

I am grateful to the British Museum for the use of the prints.

One Response to “A princely velocipede … is that a handle-bar, or is he just pleased to see her?”