A rather nice caricature: the hooker and the drunken soldier. 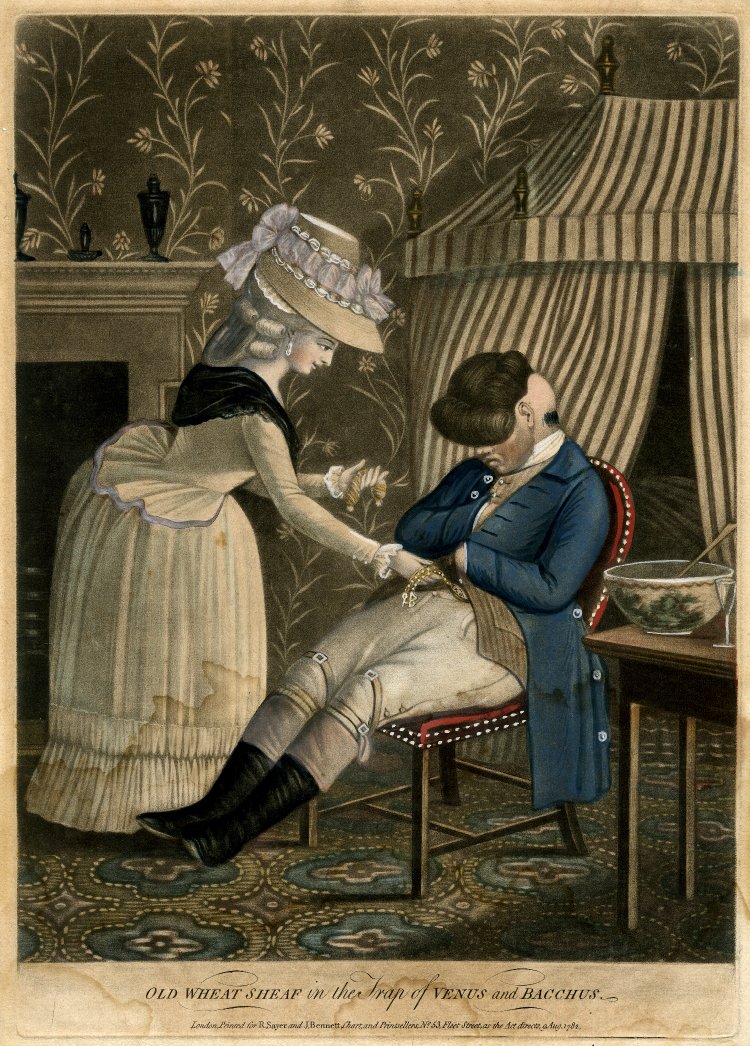 I came across this caricature on the Lewis Walpole site, but am showing the version on the British Museum website because it is in colour, and looks smarter! I rather like it, for a number of reasons:

It shows a prostitute leaning over the drunken figure of a soldier, his wig askew, while she relieves him of his pocket-watch and purse. The purse is one of those  tubular mesh items, later known as a sovereign purse.

She is wearing a splendid chapeau, entirely appropriate to the date of the print (1786). But I really like the depiction of the wallpaper and carpet – it is very evocative of the time. The soldier was perhaps intending to head for the pleasures of the four-posted bed, covered with a fine striped canopy, before he over-indulged in the contents of the punch bowl, which sits on the side table with his empty glass.

The theme – of the hooker stealing a watch from a client – was a popular one, and reflects the high number of cases appearing before magistrates at the time. Pocket watches were high-value, easy to conceal and dispose of, and in constant demand. But most of all I like the portrait of the young lady – she is elegant, well dressed and pretty. She is doing what she is doing because it is her only way to get on in life. She is a product of her time.

The print is called ‘Old Wheat Sheaf in the Trap of Venus and Bacchus’ and was published by Robert Sayer, described as a ‘Chart and Printseller, of No. 53 Fleet Street.’ It first appeared on 9 May 1786. I like it, and may well use it in ‘Sex Scandal and Satire – in bed with the Georgians’ when I send the manuscript off to the publishers in the summer. It helpfully illustrates the link between prostitution and petty crime in the 18th Century.

Sayer died in 1794, aged sixty-nine. He had been  a highly successful publisher, especially of maps and charts, and was a friend of the artist Johann Zoffany, who painted this conversation piece entitled ‘The Sayer Family of Richmond’, in 1781. It shows Robert Sayer, his son, James, from his first marriage, and his second wife, Alice Longfield. 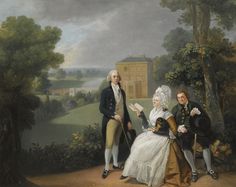 3 thoughts on “A rather nice caricature: the hooker and the drunken soldier.”