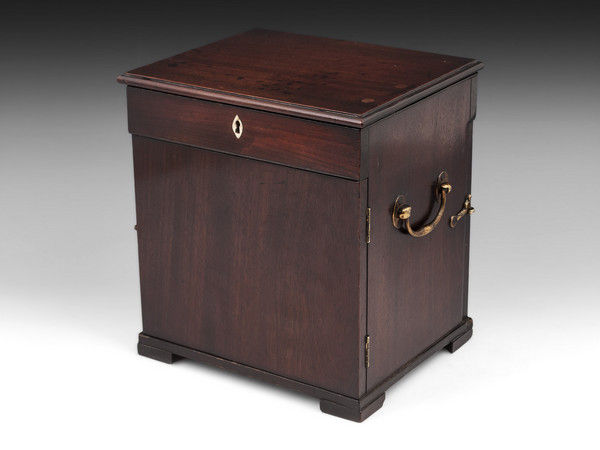 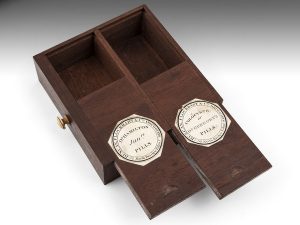 Yup, I am a sucker for 18th Century boxes, and a trip to the website of Mark Goodger Antiques never disappoints. Here he has a fascinating apothecary’s box, manufactured by Ireland & Hollier in the last decade of the eighteenth century. The label has the details: Ireland & Hollier, Apothecaries & Chemists, N22 Pall Mall. Family Medicine Chests complete and genuine. Patent Medicines etc” 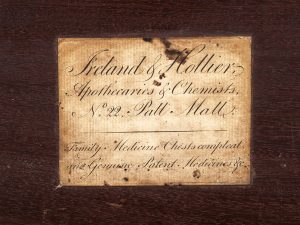 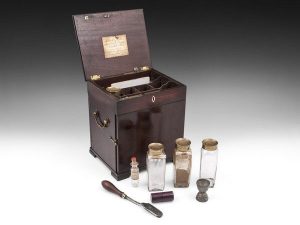 The site describes the cabinet as being an antique ‘Duke of York’ medicine chest, made of mahogany with a brass escutcheon and door latches. It has doors to the front and back, secured by brass latches and also by a special locking mechanism  which engages when the lid is closed. I had not heard of the ‘Duke of York’ as a type of medicine cabinet before. Mark’s site description says this of it: “In the early years of the nineteenth century the so-called Duke of York medicine chest became popular…The name derives from a medicine chest in the Wellcome Collection originally thought to have belonged to the Duke of York, younger brother of George III.”

However it turns out that the name was a misnomer, because the chest in the Wellcome collection was made in 1789, whereas the Grand Old Duke died in 1763. But the name stuck and there are all sorts of variants – some with double doors front and back, some with extra doors at one or both of the sides. This one is lovely, with four drawers inside, one of which contains two lidded pill compartments. It also contains three glass bottles. Opening the rear compartment reveals eight bottle compartments complete with bottles, some of them still containing traces of their original contents. Some are labelled and reveal a fascinating cornucopia of exotic ingredients. There is ‘James Powder’, Best Indian Rhubarb, Carbonate of Potash, Colocynth and Dr Gregory’s Pills, Calomel,  Dover Powder and Jalap Powder. No home should be without them! 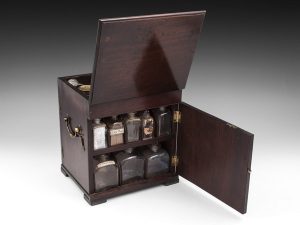 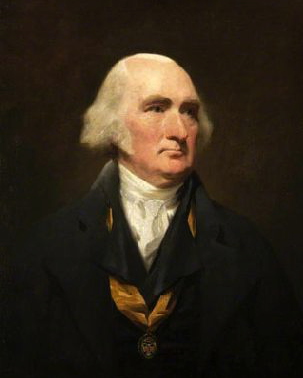 Adding to the interest is that the owner of the box has been identified as Sir William Forbes, a prominent Scottish banker who lived between 1739 and 1806. His wife had a weak constitution, having had 13 children over an 18 year period, and Sir William decided to embark on a Grand Tour in the hope that the Mediterranean climate would prove to have restorative qualities. The couple set off in June 1792, returning to Edinburgh exactly a year later. His diaries even record encountering a problem in Naples when he ran out of ‘bark’ – presumably Jesuit’s Bark (ie quinine). As Mark says on his site it is tempting to think that the chest which is now for sale was the same one which was carted round Europe during their tour. As it happened Lady Forbes soldiered on for another ten years, dying in 1802.

Sir Willam was a partner in the Scottish banking house known as Forbes, Hunter, & Co, later becoming part of the Union Bank of Scotland. It issued its own bank notes and was well-respected. Sir William was highly regarded by the Government, advising Prime Minister William Pitt on such varied matters as bills of exchange, the need for a new Bankruptcy Act, and so on. In 1803 he published his “Memoirs of a Banking House” and after he died he was buried at Edinburgh’s Greyfriars Kirkyard.

The Union Bank developed  and flourished with other take-overs and mergers,  and eventually it joined up with the Bank of Scotland, ending up as part of the Lloyds Bank group.