Because 29th November is the anniversary of one of the most shameful episodes in our maritime and commercial history I make no apology for repeating a post I first made three years ago when I first started blogging.

Two hundred and thirty-three years ago in September, a heavily laden ship had edged its way out of harbour on the west African coast and headed for the Caribbean. The ship, originally known as Zorg but re-named the Zong after it was captured from the Dutch, was under the command of one Captain Luke Collingwood. The vessel belonged to a group of merchants from Liverpool headed by Messrs Gregson and Chase (both of them former mayors of that city). Over-laden and under-provisioned, the Zong sailed for two months. The Captain fell out with the First Mate and relieved him of his duties, but then fell ill and was unable to continue as Captain.The First Mate declined to have anything to do with the matter, since he had been sacked, and it was left to the ship’s sole commercial passenger to take over the navigation. He had no idea where he was or how to navigate properly. Conditions on board were not helped by the fact that the vessel was hopelessly off course and  the journey took considerably longer longer than planned. Sickness broke out and seven of the crew died of disease. But in time the Captain recovered, and he resumed command and eventually brought the ship to its intended destination.

But that is just half the picture, on account of what happened while the Zong was still at sea.  ‘The merchandise’ on board consisted of 442 slaves, manacled and wedged into appalling conditions. 60 of them had died, and of the remainder many were sick, malnourished and liable to die before they could be sold. In any case, they were in such a poor condition that they would not fetch a good price. So on 29 November 1781 the Captain called his crew together and explained that if they did nothing, and allowed ‘the merchandise’ to die on board, the owners would lose money. But if they simply jettisoned the sick they could claim compensation from the insurers at a rate of thirty pounds a head. The justification which the ship’s owners would give to the Insurers was that there was insufficient water and provisions on board to keep the slaves alive.

And so it was that the crew seized 55 of the sick, and callously threw them overboard. The next day a further 42 were drowned. At this point the ship encountered rainy weather, which topped up the reserves of water, but that did not stop the Captain ordering a further 26 sick slaves to be thrown overboard on the first day of December. Another ten slaves broke free and deliberately jumped over the side of the Zong, preferring to take their own lives in an act of defiance rather than allow the crew to make that decision for them. In all 133 people were left to drown (in fact one managed to get back on board) in the name of commercial profit. It was indeed a shameful, horrendous episode, and one which scars our reputation for justice and the Rule of Law.

It is amazing to realize that in the eyes of the law, it was not murder, nor even wrong-doing. The Captain was never even tried for it – the court case which followed the massacre was based upon the claim made by the owners against the insurers, who argued that as the slaves had been killed deliberately, they should not have to pay up. The insurers lost and then appealed, pointing out that, far from running out of water, the Zong still had 420 gallons of water on board when she finally docked in Jamaica just before Christmas.

Unbelievably, when the case went before the Court of Exchequer Lord Mansfield, the Lord Chief Justice said: ‘The matter left to the jury was whether it was necessary that the slaves were thrown into the sea, for they had no doubt that the case of slaves was the same as if horses had been thrown overboard.”

The words of the Solicitor General are chilling: “What is this claim that human people have been thrown overboard? This is a case of chattels or goods. Blacks are goods and property; it is madness to accuse these well-serving honourable men of murder. They acted out of necessity and in the most appropriate manner for the cause. The late Captain Collingwood acted in the interest of his ship to protect the safety of his crew. To question the judgement of an experienced well-travelled captain held in the highest regard is one of folly, especially when talking of slaves. The case is the same as if wood had been thrown overboard.”

I have read and re-read those words, of one of the country’s most prominent lawyers of the day, and still find them astonishing. Not just because the slaves were denied all humanity, but because the man who sent them to their death could be held ‘in the highest regard’, not deserving censure of any kind. But then, it is not the first time that the Law appears to have been written to protect those with property, rather than to safeguard the rights of those who do not!

The case provoked an outrage, the starting point of a backlash against the slave trade which resulted, 24 years later, in Parliament banning the trade. It was known not as the’ Zong Massacre’, but as the ‘Zong Affair’, because the law simply did not see the killing as unlawful, merely the right of a captain to decide what he did with his cargo. 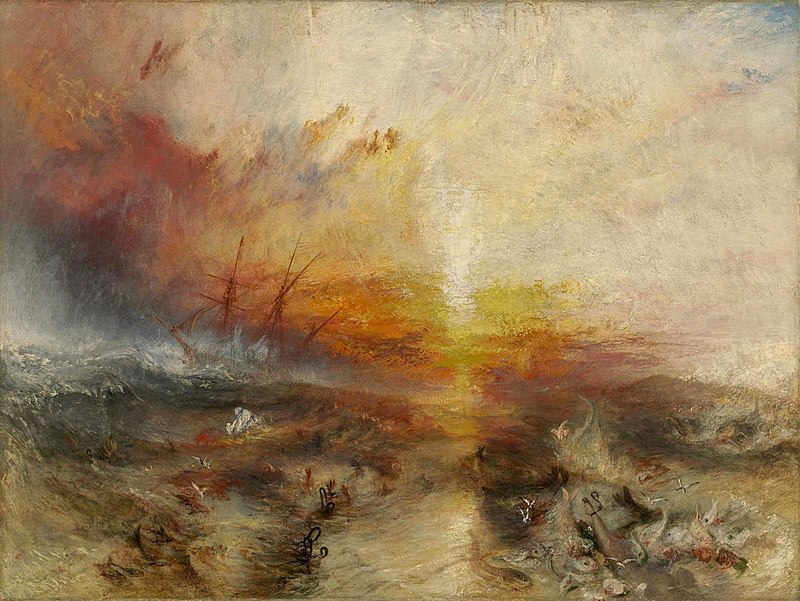 JMW Turner ‘Slavers throwing overboard the Dead and Dying — Typhoon coming on.’ helped convey the horror of the massacre.

Fittingly, there is now an underwater memorial  off the coast of Grenada in the West Indies to all the  slaves drowned during the notorious Middle Passage: