In an earlier  post I mentioned about Richard worrying about events around him – none more so than the British weather.

Here is a page reviewing the weather trends in 1794/5: 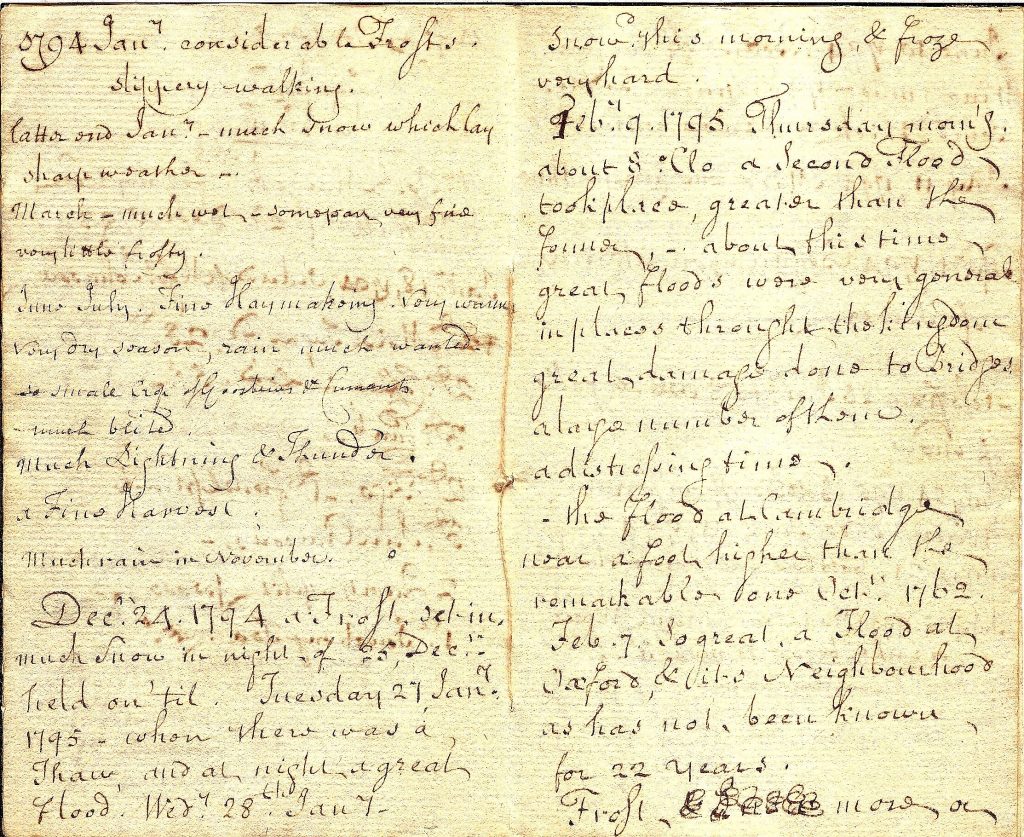 The page opens with the comment  that January 1794 saw considerable frosts and that it was slippery walking. At the latter end of January there was much snow – which lay on the ground. The weather was described as “sharp”. March saw much wet weather – occasionally it was very fine, and with very little frost. However, June and July saw “fine hay-making”. It was very warm, a very dry season. Richard notes that rain was “much wanted” and that he only got a small crop of gooseberries and currants (“much blited”). The summer saw much Lightning and Thunder but there was a fine harvest. Richard states that the year ended  with heavy snowfalls: “December 24th 1794 a frost set in, much snow in the night of 25 December – held on ’til Tuesday January 27th.” In other words snow lay on the ground for the period of an entire month. The thaw then set in “and at night a great flood” Typical British weather – it then turned cold again, with snow, and it froze very hard.

Ten days later on February 9th on “Thursday morning about 8 o’clock a second flood took place, greater than the former. About this time great floods were very general in places throughout the kingdom – great damage done to bridges,  a large number of them. A distressing time”. Apparently the flood at Cambridge was almost a foot higher than the remarkable one of October 1762, while the flood in Oxford and its neighbourhood on February 7th was “so great as has not been known for 22 years”. This suggests to me that Richard gleaned this information from reports in the newspaper and then wrote things up in his diary – and indeed some of the weather entries relate to far-distant places such as St Petersburg and Berlin.

The next page of the day book is taken up entirely with his records for bottling off currant wine, before meandering off into a memorandum about powers of attorney, the sale of £500 South Sea Stock intended for the benefit of Horsleydown School in London (of which he was a trustee) and more payments to have his short and longcase clocks cleaned.

This particular note book ends with a review of the days on which he did his laundry – or rather, as her put it, the days when he “wash’d a great wash”. March 27 1794 was apparently warm enough to do the first laundry of the Spring – presumably because the bedding could be hung out on the hedges to dry – and was repeated on June 2nd. The next time he did any washing was a double dose on September 10th and 11th. That seems to be it for the year, so unless he had rather a lot of sets of bedding that would suggest a change of sheets just three times a year…. no wonder the Georgians got bed bugs!

One Response to “A review of the weather, 1794-5: frosts and floods – and snow for the entire month.”