Another repeat of an earlier blog with an Irish flavour:-

I have always liked pictures which combine pigs and royalty – they make such an interesting composition! So I was delighted to come across this one on the Lewis Walpole site: 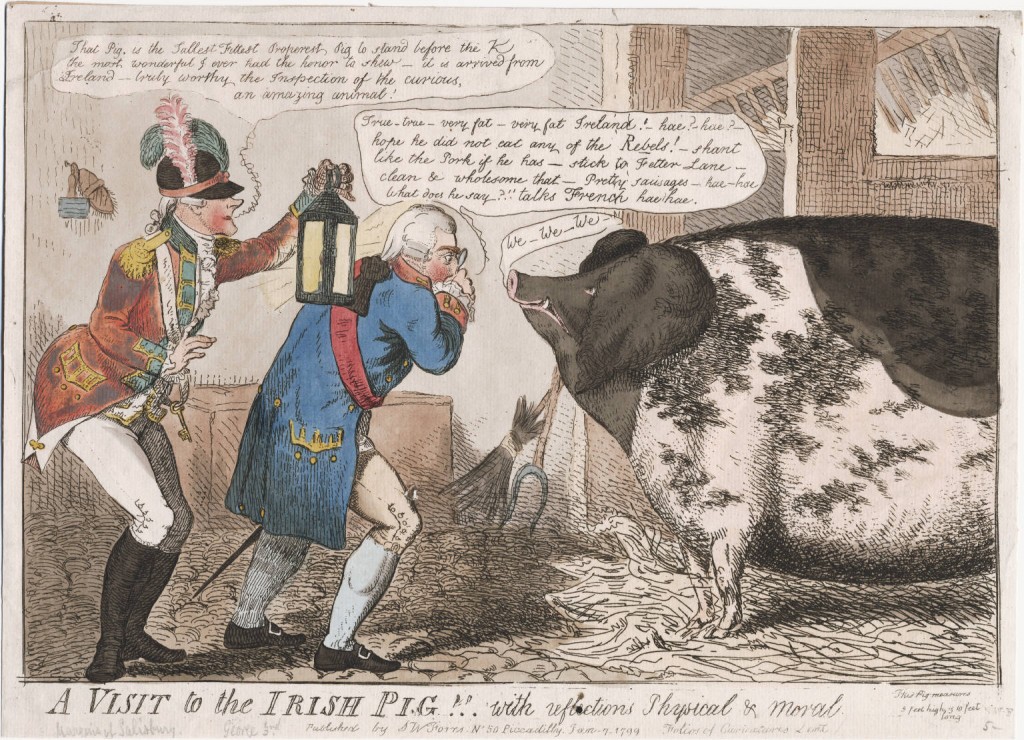 Entitled “A visit to the Irish Pig, with reflections Physical and moral” it is the work of Isaac Cruikshank and appeared in 1799. The print shows George III peering through a magnifying glass at an extremely large hog, which was apparently a gift from Enniscorthy, Ireland, as a peace offering; behind the King stands James Cecil, Marquess of Salisbury, who was the Lord Chamberlain at the time. He holds a lantern in one hand and is dressed in Light Horse regimentals.

The following description comes from an 1813 book on satirical caricatures (JP Malcolm).

“The enormous pig exhibited in London some years past is represented so large as to occupy nearly half of the print. A personage of high rank and once a good practical farmer condescends to visit the overgrown animal; and they both examine each other with great attention, except that the latter is deficient in his observation, through the want of a glass. A military gentleman, decorated with a key of office, or the key of the sty, (which the caricaturist pleases) assists in the inspection with a lantern and remarks:  “That pig is the tallest fattest, properest pig to stand before the K—  – the most wonderful I ever had the honour to shew. It is arrived from Ireland; truly worthy of the inspection of the curious; an amazing animal.”

The King responds “True, true, very fat, very fat – Ireland,- ha! Ha! – hope he did not eat any of the rebels; shan’t like the pork if he has; stick to the Fetter Lane – clean and wholesome that – pretty sausages, ha ! ha! – what does he say? Talks French, ha! Ha!

The commentary continues: “The great political measure of uniting the kingdoms of England and Ireland under the superintendence of one legislature excited considerable warmth of discussion in both countries. Predictions were confidently pronounced as to the practicability utility and beneficial results of such a union; and the disgrace resistance and dis-union which would occur on the part of Ireland.”

By way of explanation:

The Irish Rebellion of 1798 was an uprising against British rule in Ireland lasting from May to September. The Irish republicans, known as The United Irishmen, had been inspired by the events in France and by the American war of Independence to try and throw off the yoke of English control.

Displeasure at the way the country was ruled crossed sectarian boundaries: Catholics and Protestants alike were fed up with a lack of representative government and looked to France to assist them in obtaining freedom. In 1796 the French sent a force of some 14,000 troops under General Hoche but failed to gain a landing (more by bad luck than anything else – shades of the Spanish Armada) and they were forced to return home.

Gillray recorded the incident with this print published in 1797: 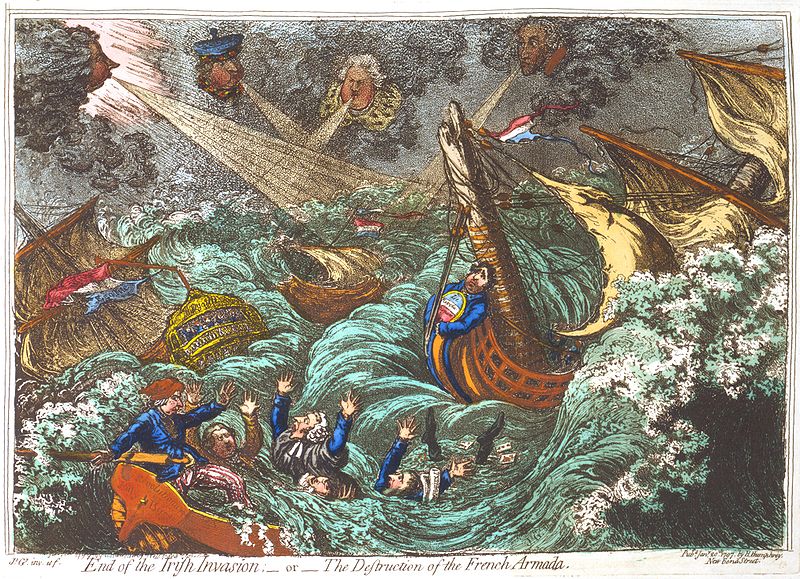 1797 was marked by a series of uprisings, in turn leading to repressive acts and martial law. In 1798 rebellion became widespread, with an attempt to take Dublin. Thousands of troops poured into Wicklow, County Antrim, County Down and Wexford. The aftermath was gruesome with appalling atrocities inflicted on anyone suspected of supporting the rebels. Many were burned alive, others were executed or piked to death. In the summer the rebels were assisted when a thousand French troops landed in County Mayo but when another 5000 French troops appeared off County Donegal they were driven off by the Royal Navy. Retribution was swift and merciless.

Figures as to the number killed in the uprising vary from 10,000 to 50,000. The only certain thing is that it was put down in a barbaric manner. It did however achieve one thing: a recognition that something had to be done to remove the excesses of the previous Anglican Protestant Ascendancy. The Act of Union was passed in August 1800, and came into effect on 1 January 1801. It removed the measure of autonomy previously granted to the Ascendancy and perhaps reflected the perception that it was the brutish misrule of the Ascendancy which had provoked the uprising. Any hopes of Catholic emancipation were dashed three months later when the  government abandoned the idea, and William Pitt resigned. 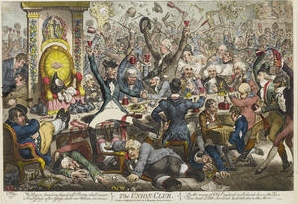 Reverting to the apparent gift of a pig to the King when the rebellion was finally put down: this was presumably intended as a sign of friendship, an apology by loyal supporters of George III for the behaviour of the rebels. It was not of course the end of the “Irish Question” but is a reminder of the divisions and conflicts which have marked the intervening centuries.

Post script: Because this is being posted on Valentine’s Day I thought I would mention a lovely custom revealed in the diaries of William Snooke. He was brother-in-law to my ancestor Richard Hall, and was an obscenely wealthy young man who lived in the Manor House at Bourton-on-the-Water. Every year on 14 February he would give one penny to each of the children in the village schools in the area – 120 pupils, so ten shillings in “old money”. O.K., he could afford it, but it was a nice gesture, and an interesting one when you consider that William and his wife were childless. I can just imagine a load of farmworkers children excitedly standing in line waiting to receive what to them would have been a real treat – sweeties time!

2 thoughts on “A right royal porker revisited … Kings, pigs and an Irish uprising.”