Today (15th January) is supposed to have been the date when, in 1797, a haberdasher called John Hetherington caused a sensation by wearing a top hat in the streets of London. Legend has it that he caused a riot. The story goes that when he “appeared on the public highway wearing upon his head what he called a silk hat (which was shiny lustre and calculated to frighten timid people) … several women fainted at the unusual sight, while children screamed, dogs yelped and a younger son of Cordwainer Thomas was thrown down by the crowd which collected, and had his right arm broken.” It doesn’t sound really plausible, with the unfortunate hat-wearer allegedly being bound-over in the sum of £500 to keep the peace, particularly as the tale does not look as though it appeared in print until another one hundred years had elapsed, with doubtful provenance then being given as an authority.

More to the point, the top hat (a name which was not to appear until the nineteenth century) had been in existence for many years. The only thing ‘new’ was that by the 1790s they were being made of silk rather than beaver pelts – but the whole thing about this was that the silk was made to look like beaver using a fabric called silk shag (a form of hatters’ plush, which had a soft silk weave with a very long, defined nap). It is highly unlikely that the uninitiated would have noticed the difference. In any event a more likely candidate for the first use of a silken substitute for fur was George Dunnage, who advertised just such a hat in 1793 calling it ‘an imitation of beaver’. Why would anyone have been astonished at it – unless the whole story was a fabrication put about by Mr Hetherington as a sales puff?

In the time of Richard Hall any such item of headwear would have been known as a beaver hat (topper, stovepipe, high hat, cylinder hat or chimney pot hat were all later appellations). But tall, towering, absurd structures had been around for centuries. Have a look at this one: 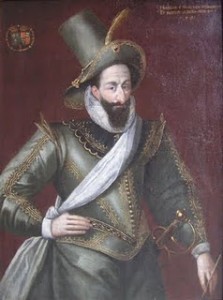 But don’t think  such absurdities were confined to the French side of the Channel. 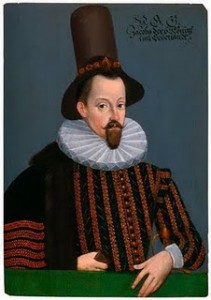 Here, painted in 1595 is the man who was to become our own James I (at the time, just plain James VI of Scotland. Well, not exactly plain.) Now that hat would have frightened the pigeons…

The fashion disease spread to nobles as well – here is the first Earl of Exeter, Thomas Cecil, painted in 1605 . 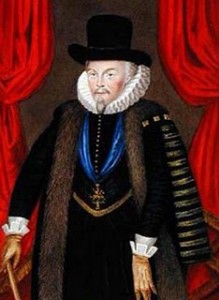 And when a certain Guido Fawkes ventured to blow up the Houses of Parliament history recorded him wearing a singular structure on his head. 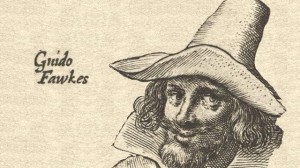 O.K. it had a floppy brim, but it wasn’t exactly a close fitting skull cap was it?

Through into the Eighteenth Century William Hogarth shows the Lord Mayor wearing a fine beaver in 1749,

and by the end of the century tall hats were commonplace as in this 1796 water colour by the French artist Carl Veney. He made a specialty  of painting les incroyables (the French equivalent of the Regency dandies).

James Gillray was also showing the monarch and his family in straight-sided beaver hats. Whether the popularity of the new silk versions caused the collapse in the fur trade, or whether the collapse in the fur trade forced manufacturers to become more inventive with their alternatives, is not clear. The new methods were quite complicated and two different weights evolved, one for ‘Town’ and a heavier one, more suitable for riding, known as ‘country weight’.

Wikipedia gives the method of construction: ” A town-weight silk top hat is made by first blocking a piece of cheesecloth that has been coated with shellac on a wooden top hat block (which is made of several inter-connecting pieces like a puzzle so the block can be removed from the shell, as the opening is narrower than top of the crown) to form the shell. After the shell has more or less dried but is still a bit sticky, the block is removed and the silk plush, which comes in several different pieces, is cut to the correct pattern, then stuck onto the shell. The top flat part of the crown uses a single flat disc of silk plush that has a circular nap. The sides consist of one or two rectangular pieces with the ends cut at a diagonal. The edge of the crown where the side pieces and the flat disc meet are carefully hand stitched together. The side pieces where the seams meet at the sides are not stitched as the silk nap conceals the seams.

The upper brim is also covered with a piece of silk plush or with silk petersham (a ribbed silk). The under-brim is also covered with either cloth or silk. After the hat has fully dried, the brim is curled and bound with silk grosgrain ribbon, and a hat band (either silk grosgrain with or without a bow, or a black wool mourning band without a bow) is installed. Finally, the lining and the leather sweatband are carefully hand-stitched in.”  The country weight hat is heavier because it starts with extra layers of shellac and calico. 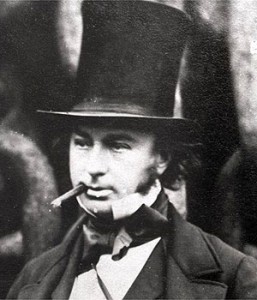 Other famous wearers were Abraham Lincoln, 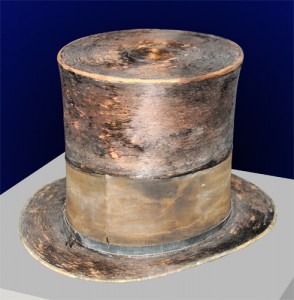 Princess Diana with her take on the topper:

So, forget about John Hetherington: it seems fairly clear that the top hat has been with us for over four hundred years. It had its heyday in the Victorian era, and remains today with vestiges of its former glory – outside posh hotels, at Royal gatherings, and as a fashion statement. 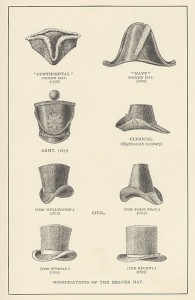 And so, in the immortal words of Leslie Nielsen as Lt Frank Drebin in Naked Gun: