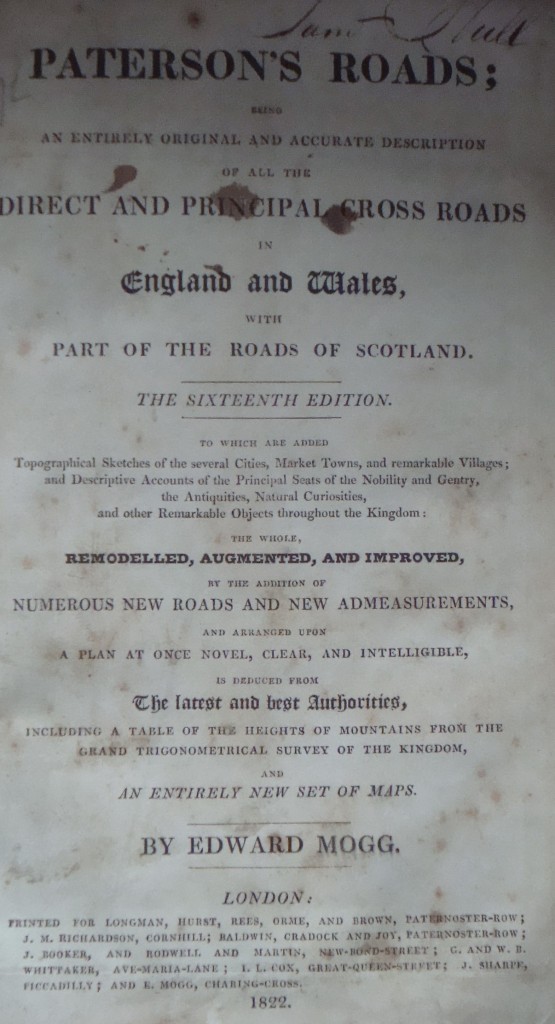 A fortnight ago I visited London in order to give a talk to the City of Westminster Guides’ Lecturer’s Association – great fun, and very well received, but I have to confess that as a country boy I really don’t like big cities. London always make me feel as if I need a bath…

One of the highlights of the trip was the chance to call on an antiquarian bookseller called Hawk Norton. He publishes a catalogue of books, mostly relating to the City of London, and visiting him at his home in Brentford is like entering an Aladdin’s Cave of wonderful old books. In fact I bought a few, including one I had no idea I wanted (!) namely Paterson’s ‘Roads’. The story behind the book is interesting – Daniel Paterson was born in 1739 and he joined the Army as an Ensign before rising through the ranks to become lieutenant, then captain, then major and finally, on 1 January 1798, lieutenant-colonel. For many years he had been Quarter-Master General of His Majesty’s forces at the Horse Guards in London.

For some reason he decided that what the army really wanted was a book listing all the cross roads in England, and in 1771 he published “A New and Accurate Description of all the Direct and Principal Cross Roads in Great Britain, containing:

Not the punchiest of titles! Nevertheless, the army were most appreciative of a book which gave exact marching distances between towns and villages across the land. A second edition followed in 1776 when it was called “Paterson’s British Itinerary: being a new and accurate Delineation and Description of the Roads of Great Britain” and it ran to two volumes. 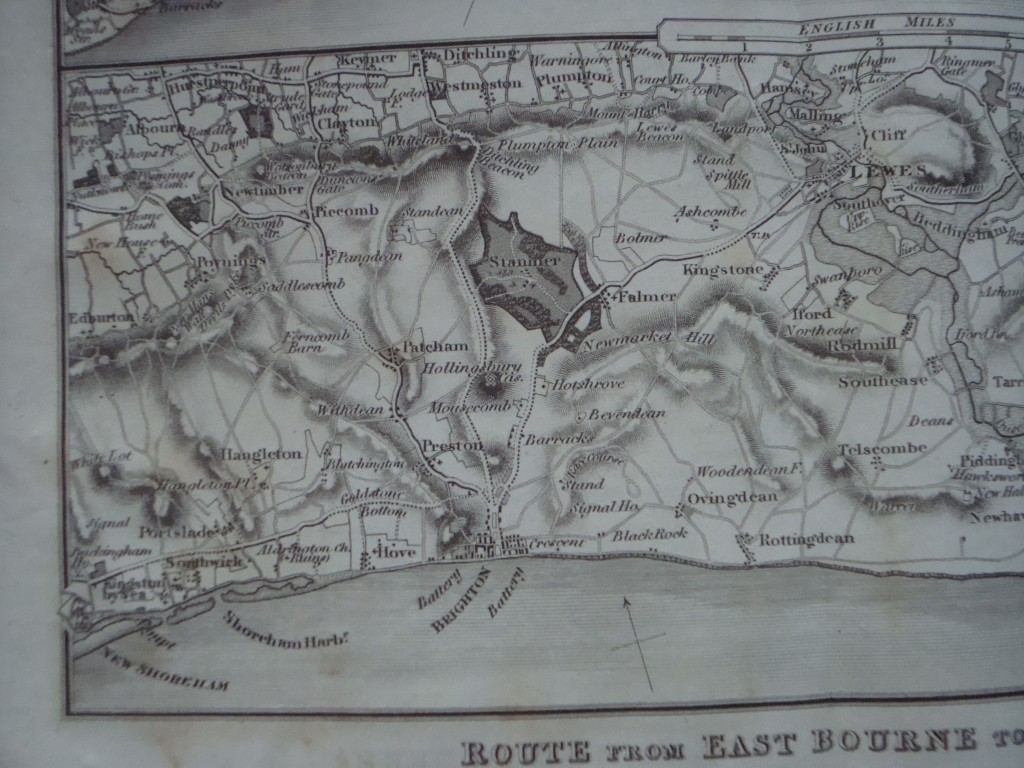 Subsequent editions sold by their thousands, as Paterson added more and more information, both useful and useless. The original slim volume of  a hundred pages had grown to some seven hundred pages of factual information. By the time it hit its 18th edition in 1826 its title hinted at the encyclopaedic nature of the work. It was now called “Paterson’s roads : being an entirely original and accurate description of all the direct and principal cross roads in England and Wales, with part of the roads of Scotland” and it stated that it included “topographical sketches of the several cities, market towns, and remarkable villages; and descriptive accounts of the principal seats of the nobility and gentry, the antiquities, natural curiosities, and other remarkable objects throughout the Kingdom: the whole re-modelled, augmented, and improved, by the addition of numerous new roads and new admeasurements, and arranged upon a plan at once novel, clear and intelligible, is deduced from the latest and best authorities: including a table of the heights of mountains from the grand trigonometrical survey of the Kingdom; also a table of the population, from the census of 1821; to which is annexed the arrival and departure of the mail together with the rates of postage; and an entirely new set of maps.”

Hey, what’s not to like! Oddly Paterson didn’t have anything to do with any of the books after his fifteenth edition. He was such a recluse that everyone thought that he had died, and thus editions sixteen onwards were authored by Edward Mogg, who assumed that the original author was long gone. Not so, he was leading a hermit-like existence in Clewer, near Windsor. He actually died in 1826. 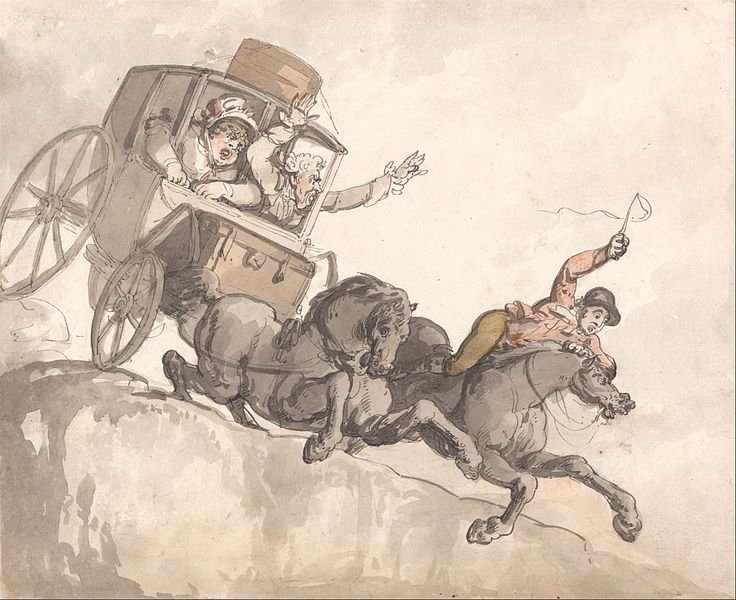 Coach travel was never without its risks – here, Rowlandson’s The Runaway Coach, shown courtesy of the Yale Center for British Art.

Poor Paterson: his magnum opus was dogged by litigation. When he first entered into a contract with the bookseller Thomas Carnan to print and publish the first edition of the book in 1771 he could not have known that other writers would then seek to plagiarise the work, making free use of his maps and pinching his ideas. Indeed the doctrines about copyright which lay behind court decisions made as a result of the Paterson litigation cases continue to resonate in our modern Copyright laws. I rather suspect that all that litigation was responsible for Paterson becoming such a recluse. No wonder he chose to lie low! 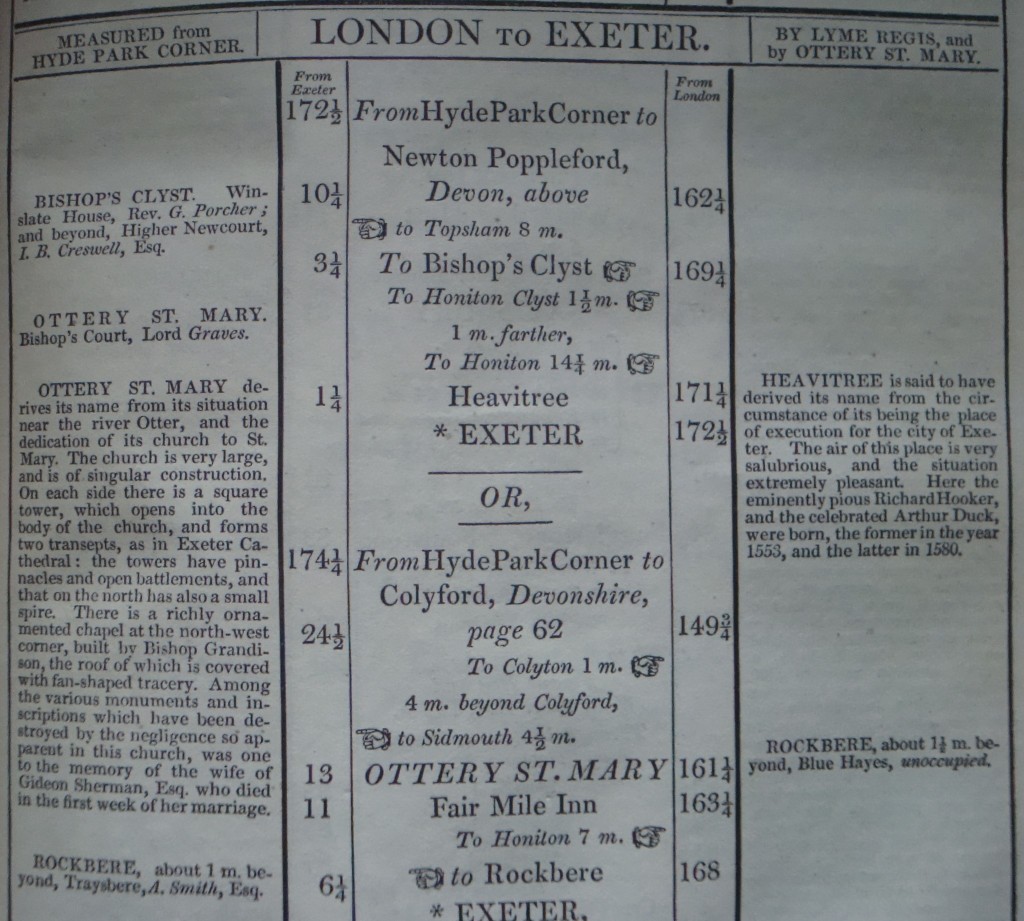 His work remains as a lively, fascinating picture of the topography of Britain towards the end of the Georgian period. If you want to visualise what it was like to get the stage coach from, say, London Bridge to Exeter (“172 ½ miles”) or how you could branch off during the journey to visit Dorchester, or to see all the coaching stops, distances, sights to be seen etc, then this is invaluable. So, a warm thanks to Hawk Norton for flogging me something I never knew I wanted, and which has proved to be such a compulsive waste of my time that I am continually picking it up and delving into – even though, if truth be told, I am not actually likely to be putting any of the information to practical use! After all, who needs a Paterson’s Roads when you have a SatNav – but I know which one I prefer most. Back it up with one of the fascinating linear maps which were available at the time and you can really imagine the journey… 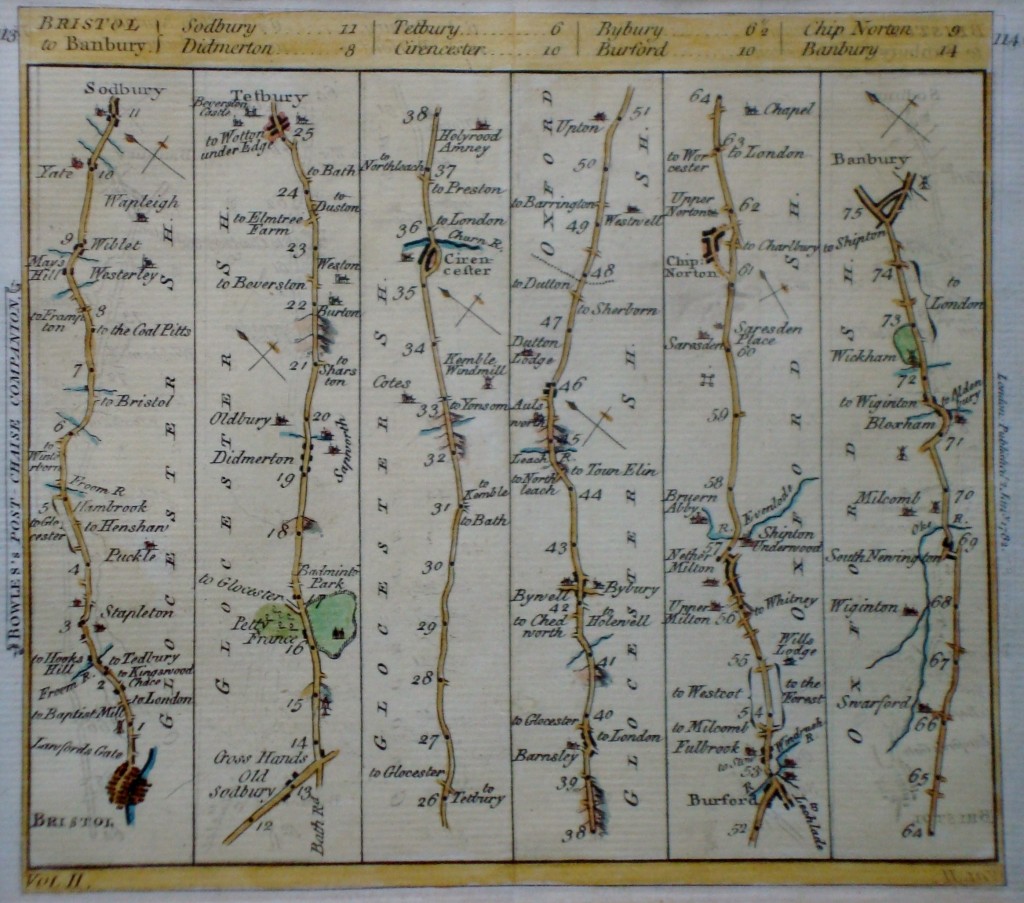 Bowles Post Chaise Companion showing a linear map of the journey from Bourton to Bristol (own copy).

Thank you Paterson – and thank you Hawk! Anyone interested in looking at his catalogue of old and second hand books can contact him on hawk@btinternet.com but the link should come with a health warning: the catalogue is fascinating, and could distract you for hours!