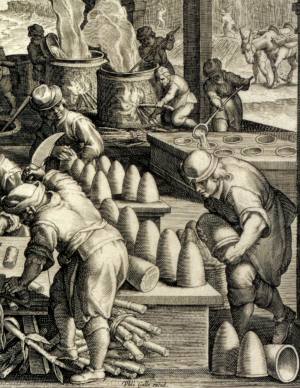 The vast increase in sugar consumption in the Georgian era led to a huge range of sugar-linked paraphernalia hitting the market and altering our social habits. Boy, did the Nation have a sweet tooth! My ancestors shopping lists show that in November 1788 he bought 14 pounds of “Lisbon Sugar”, and required another 28 pounds of it just six weeks later!

It is interesting to look at the different types of sugar, and how they were made, and then move on to the actual items spawned by this massive industry.

Raw sugar cane was cut on the plantations, particularly in Jamaica, and then brought across the Atlantic as molasses for processing. (In time, refineries were developed in the Caribbean, but that came later). The actual process for refining was described by the great Swedish botanist Linnaeus in May 1741 when he visited a sugar production factory in Norrkoping: ‘Here the coarse and unrefined raw sugar was pulverized and boiled in water, diluted with limewater, mixed with ox blood or egg white, skimmed and poured into inverted cone-shaped moulds, perforated at the tip; from these a syrup trickled down into a bottle; this was repeated, and then the mould was covered with a white, dough- like French clay like a lid. It is strange that there should be no such clay in Sweden, but it has to be imported.’

The clay was used to filter the water as it percolated down through the sugar. The first effort was a yellow colour. Double refining meant that this was re-boiled, allowed to recrystallize, and then filtered again through the clay. This left it off-white, as with Lisbon Sugar. A third distillation process would leave it whiter still.

In all there were six basic grades of refinement. (The whiter the sugar, the more expensive it was.) So, you moved through from:

1 crude sugar or muscovado—raw, untouched sugar straight from the cane. This was hardly ever used in cooking.

2 Strained or brown sugar—similar to muscovado, except for being slightly lighter in colour and harder.

3 Earthed or white powder sugar—brown sugar that has been further whitened by removing impurities from it.

4 Refined sugar—white sugar. This was sold in both powder and loaf form.

Generally the sugar was sold in cone-shaped “sugar loaves” – containing rock hard sugar which had to be broken off for use.

Nippers were therefore used to break off lumps. These could be either hand-held  or table-mounted for extra leverage.

A mallet would then be used to break up lumps into pieces or alternatively a pestle and mortar (like this lovely 18th Century metal one, from Cellar Antiques ) would be used to pulverize the sugar into granules.

The pieces would then be collected  into sugar bowls (as in this one from Derby, on the left) or baskets:

Tongs were developed to enable the refined ladies to add the equally refined sugar to their tea cups (these ones shown courtesy of Steppes Hill Farm Antiques, dating from 1780).. 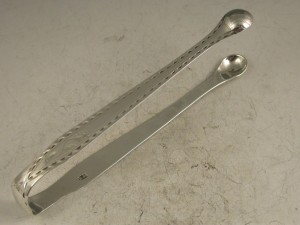 Sifters (these four from m.ford creech  ) or balluster-shaped sugar shakers could then be used to scatter the sweetener.

Where broken off lumps of sugar were poured into hot toddies etc a glass shaped crusher might be used to “stab” the lump in the bottom of the container so that the sugar would break up and become dissolved.

So clearly, importing sugar was not just beneficial to the plantation owner, the shipper, and the sugar producer – it also meant handsome profits for the metal workers, glass makers and porcelain manufacturers who developed this vast range of sugar accoutrements!

4 Responses to “A spoonful of sugar….”