The initial two come via the British Museum site. First up, a somewhat jaundiced look at the artifices of ladies’ fashion: 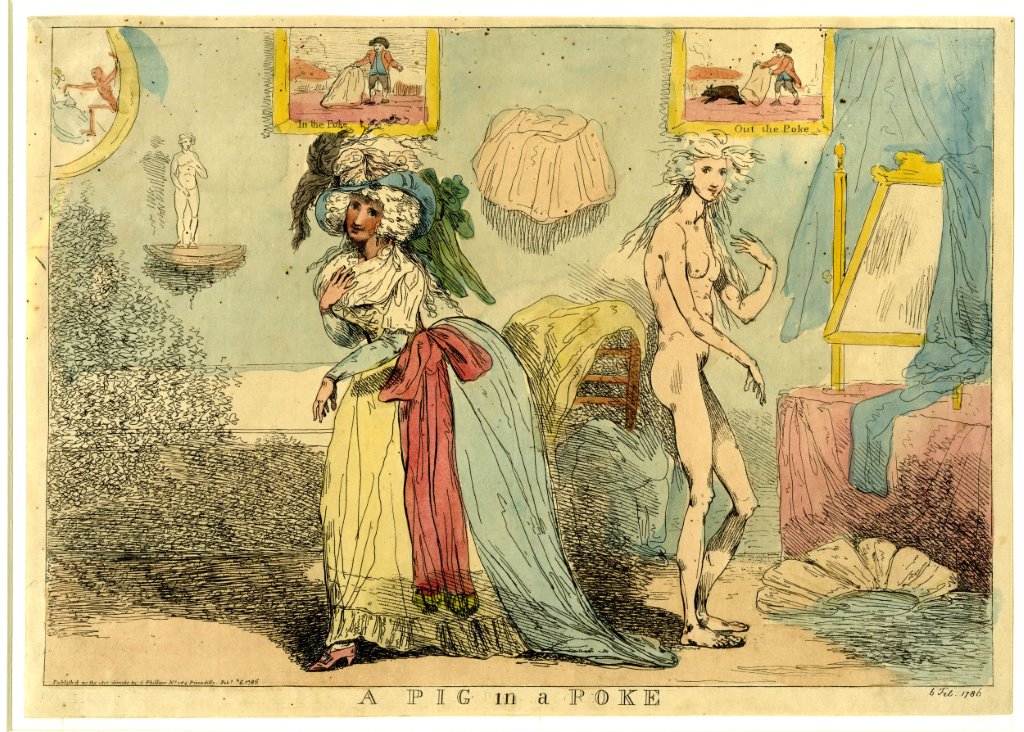 On the left, a fashionista in all her glory, and on the right a scrawny individual  standing naked in front of a mirror. The moral would appear to be: you don’t know what you are getting until you get her undressed!

As the Museum site states: “The interior of a lady’s dressing-room: she is represented fully dressed on the left and naked on the right, her attitude in both cases being the same, and imitating that of the Venus de’ Medici, a statuette of whom stands on a wall-bracket. The two figures stand back to back, looking towards the spectator. The dressed figure wears a large feathered hat, puffed-out hair with pendant tresses, a projecting gauze-covered bust on which her right hand rests, her petticoats extend backward in a sweeping curve, a small foot in a high-heeled shoe projects from her petticoat. The naked figure is lean, with flat breasts, and entirely without the feminine curves which are added by her dress. Her hair is straggling and lank; her feet large and ill-shaped, her face pale. She stands before the mirror on her dressing-table, on the ground is a false ‘derriere’, a similar arrangement hangs on the wall, other garments are draped over a chair. Three pictures are on the wall: on the extreme left in an oval frame is partly visible a picture of a seated lady on whom Death, a skeleton, is making a furious onslaught. Above the head of the dressed figure is ‘In the Poke’, a countryman holding a bulky sack. Above the naked figure is ‘Out the Poke’, in which the pig scampers away from the empty sack.”

It was published by James Phillips and first appeared in 1786.

The second one of the same title is by James Gillray and came out a couple of years later: 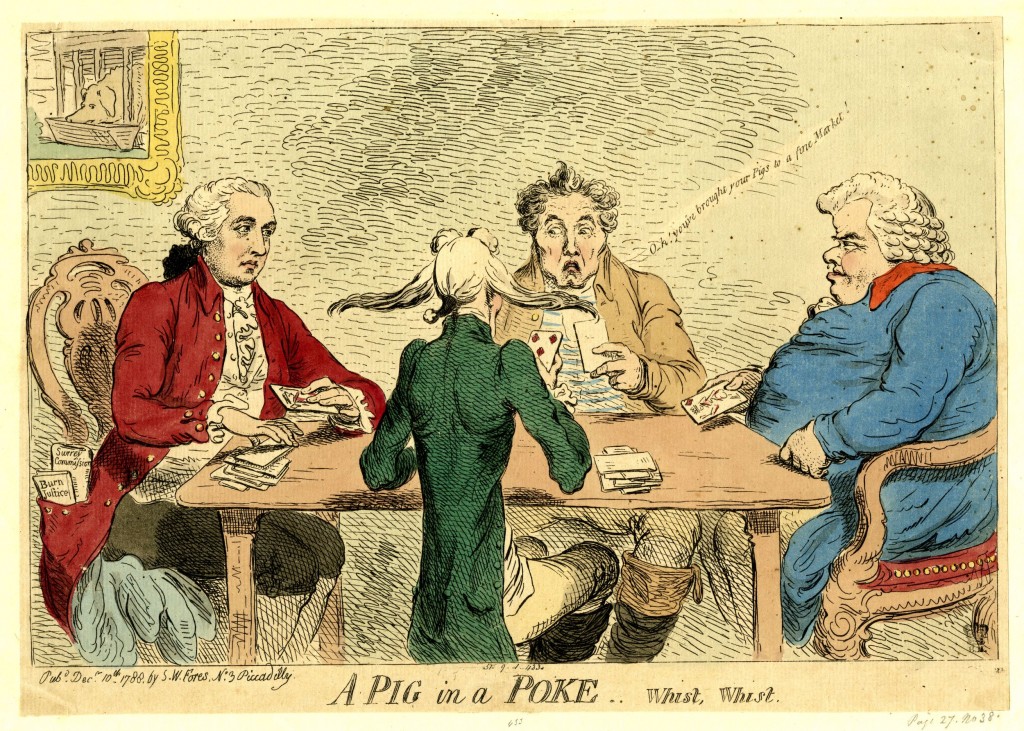 It is a political satire, rather lost on us nowadays, but the Museum site describes it as:

” Four men, their feet cut off by the lower margin, play whist at a rectangular table; each has one card in his hand and is about to play the last trick, the tricks piled on the table show that each side has six tricks. Sir Joseph Mawbey (left) looks at his partner (right), a very stout man wearing a legal wig, both hold court cards (diamonds). The man seated on the farther side of the table looks sideways at Mawbey, saying, “O—h! you’ve brought your Pigs to a fine Market!” His partner, in back view, is a very thin man whose hair extends grotesquely on each side of his head; he holds the five of diamonds. From Mawbey’s pocket projects a document, ‘Surrey Commission’, and a book, ‘Burn Justice’ (Burn’s well-known ‘Justice of the Peace and Parish Officer’, used by all acting J.P.s ). Above his head is a picture of a pig feeding from a trough.”

I can’t say I know much about Mawbey – Wikipedia tells me he was a distiller and politician, and a supporter of John Wilkes. He was a member of the Bill of Rights Society and stood for Parliament as the representative for the County of Surrey. According to Wikipedia, “Mawbey was unpopular with the local gentry.He claimed to be above party, but was in the end a figure of fun and satire.” I suspect that what Gillray is saying is “Vote for this man and you will not have the faintest idea what you are getting” – emphasised by the allusion to gambling on the turn of the cards.

And to end with, my old favourite, with our porcine friends in their poke bonnets, shown courtesy of the Lewis Walpole Library: 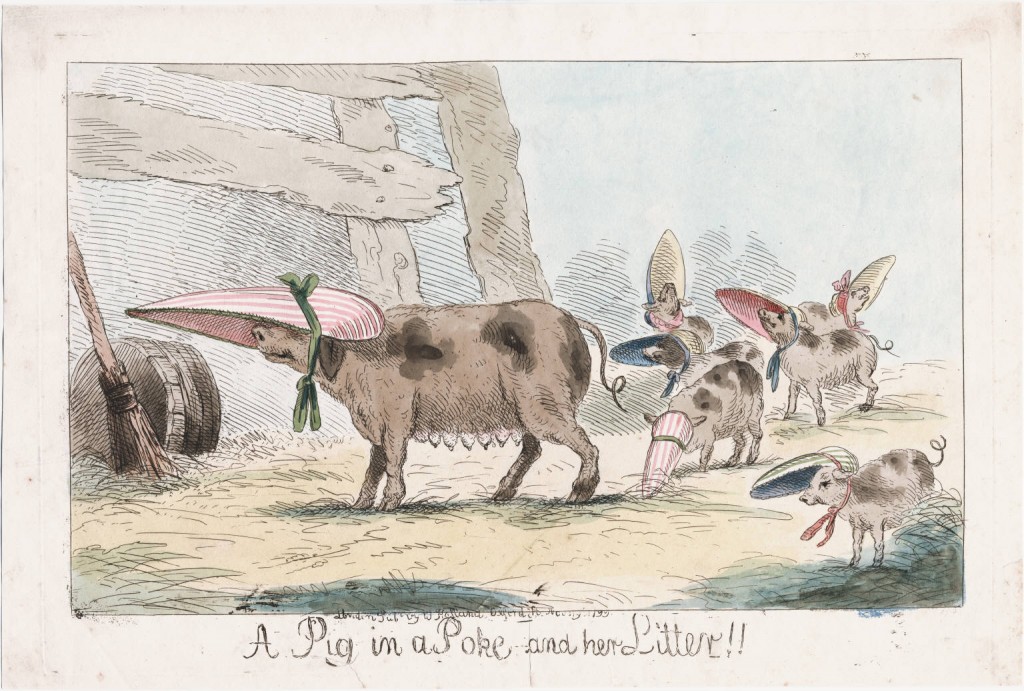 One Response to “A trio of pigs in pokes”