A trip to the theatre with Thomas Rowlandson.

A group of images from the pen and paint-brush  of Thomas Rowlandson on the topic of visiting the theatre in the Georgian era. 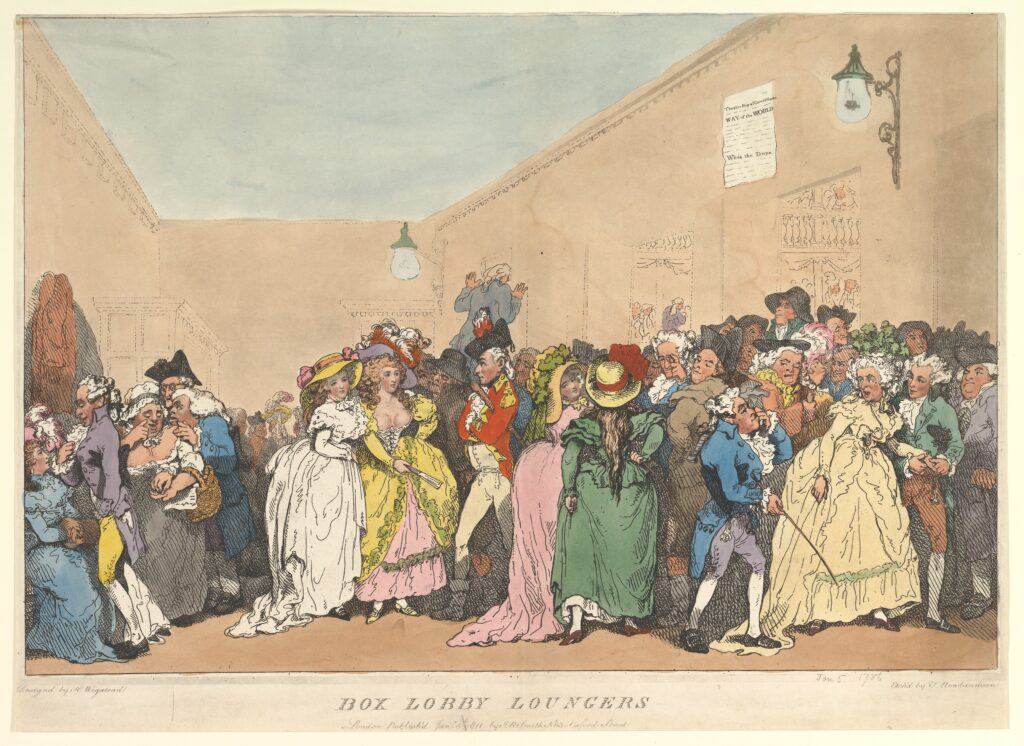 First up: Box Lobby Loungers, showing the  melee in the lobby before the show starts. It appears on the Metropolitan Museum site, which describes it as:

“A reissue of print first published 1786. A crowded room next to a theater, which is glimpsed through two open doors at right. Courtesans and ladies are being inspected by loungers, including Colonel George Hanger (later Lord Coleraine) with a club under his arm (his “Supple Jack”). Hanger looks at two attractive courtesans and fails to notice a pickpocket taking the seals from his fob. At right two more fashionably dressed women attract elderly admirers. Two sea captains regard a short elderly beau with contempt. Other figures include two “Don Juans”, and a woman who sells oranges and programs and acts as a bawd. A playbill reads: “Theatre Royal Covent Garden / The Way of the World / Who’s the Dupe.” 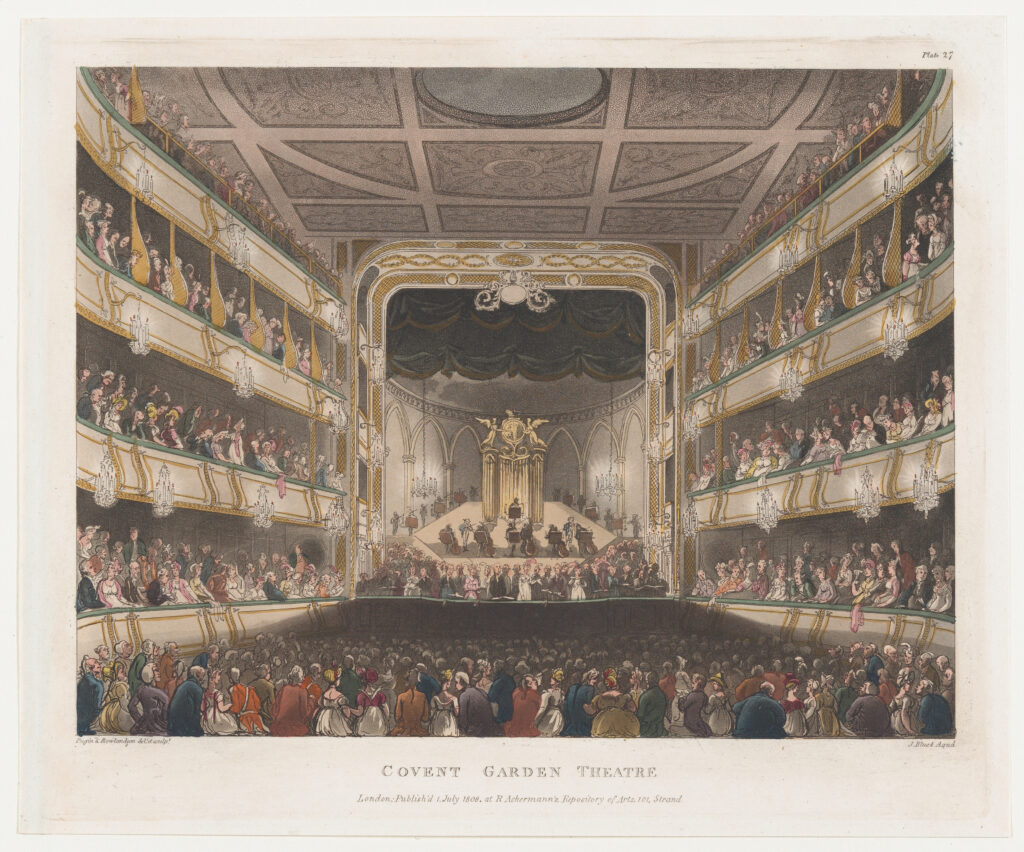 Moving into the auditorium, a collaboration between Thomas Rowlandson and Augustus Pugin, from 1808,which found its way into Ackermann’s Microcosm of London. It shows the interior of the theatre at Covent Garden.

Rowlandson also gave an excellent idea of how theatre-going was an opportunity to gossip, flirt, gamble and drink: 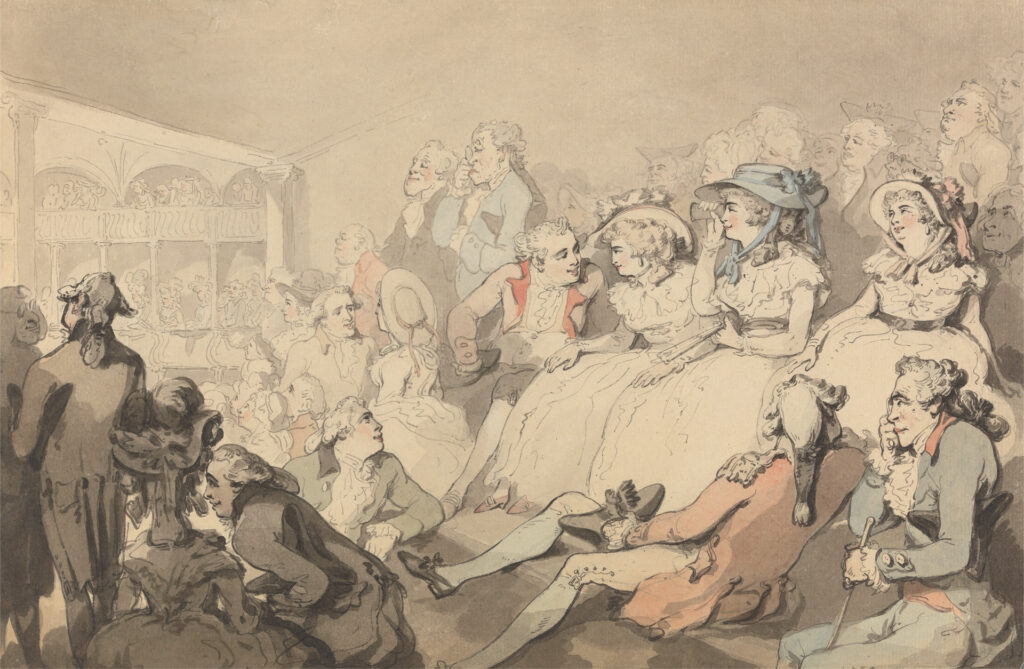 The image of  ‘An audience watching a play at Drury Lane Theatre’ appears on the site of the Yale Center for British Art and apparently dates from 1785. The description of the print goes on to say:

“Rowlandson’s portrayal of an audience at the theater captures the culture of display and spectatorship that lay at the heart of eighteenth-century social life. Few of these spectators have actually come to watch the play. Instead they are busy studying one another and being scrutinized by figures in the surrounding boxes. Because light levels in auditoriums were not dimmed during performances, London’s crowded theaters provided an ideal venue for this sport of seeing and being seen. Rowlandson was himself a regular habitué of the playhouse; his friend Jack Bannister was a leading comic actor who regularly performed at Drury Lane. Although this scene has been identified as the remodeled Drury Lane that opened in 1775, the architecture does not quite tally, making this a more generic scene of London theater life. These theatergoers occupy the first gallery level of the auditorium, a zone reserved for the polite middling orders of society. Here young gallants try their luck with the seated ladies, a practice described in a contemporary epilogue that was often delivered from the stage to close a night’s entertainment.”

Somewhat further down the social scale, Rowlandson drew the general populace in the pit of the theatre, shown via WikiGallery: 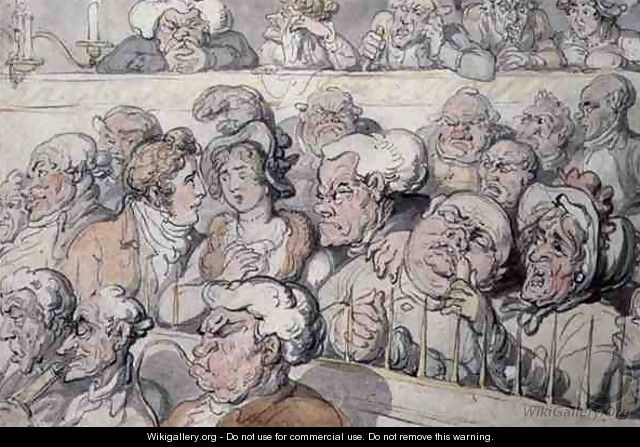 This one, also from the Metropolitan Museum, offers a side-on view of the theatre at Covent Garden, including the stage: 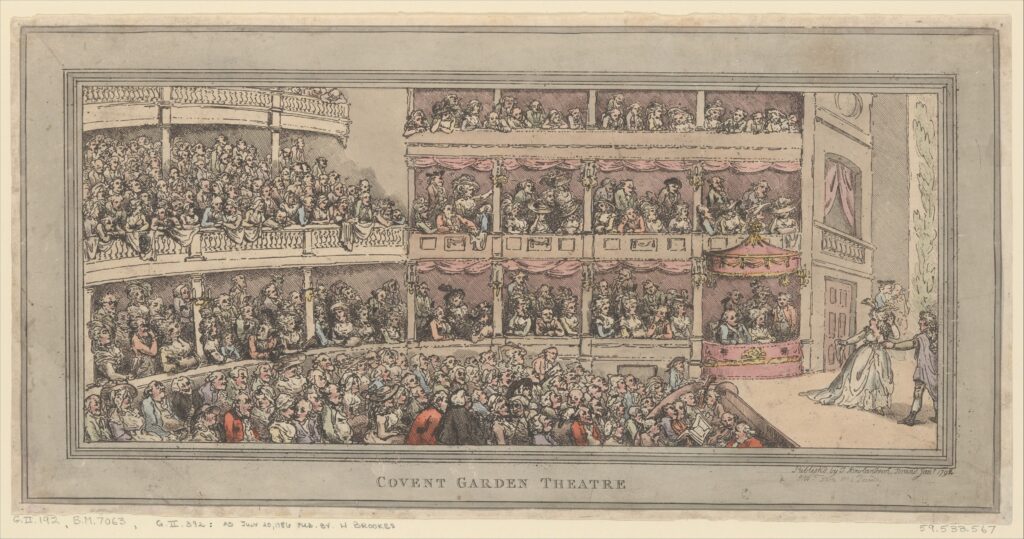 Rowlandson also drew what was going on the other side of the stage curtain – here, ‘The Dancers’ Dressing Room At The Cobourg Theatre’: 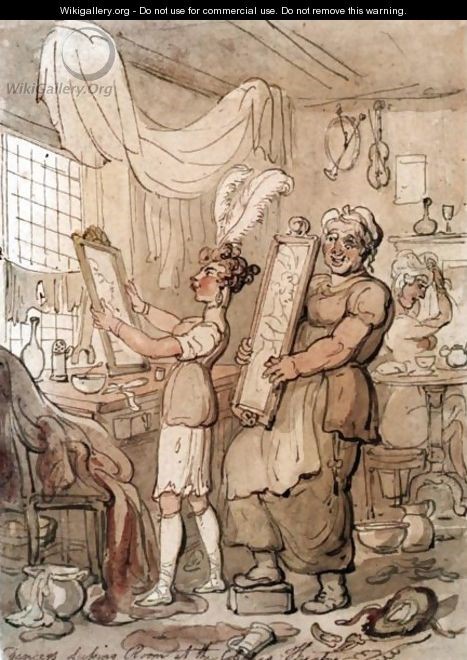 Rehearsing in the Green Room, shown below, was drawn by Rowlandson in 1789. The British Museum site describes it with the words:

“Sarah Siddons stands declaiming, looking upwards with a tragic expression, left arm raised, right elbow bent; Roger Kemble stands behind her to the right, a book in left hand, turning head in profile to the left to watch her, clenching his fists and stamping; another actor rehearses behind them, in front of a large mirror.” 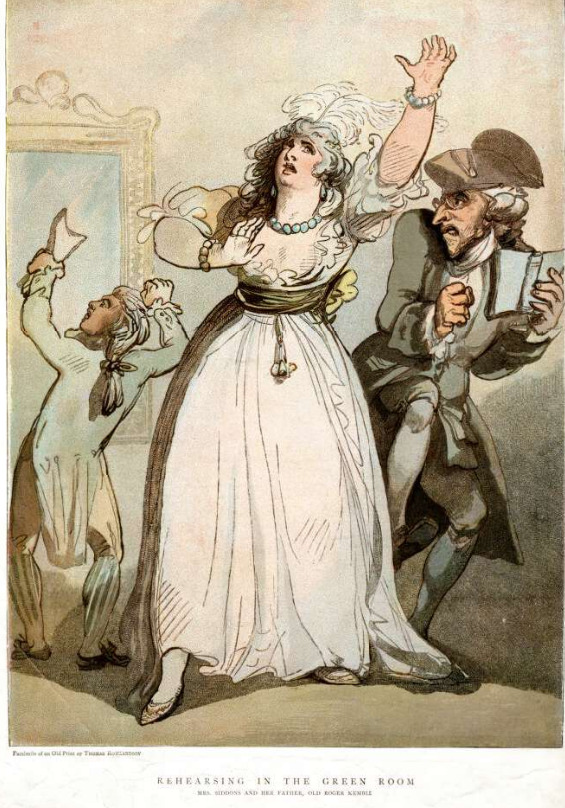 I like Rowlandson’s depiction of the different reactions from the spectators – shown via the V&A with ‘Comedy Spectators: Tragedy Spectators’ 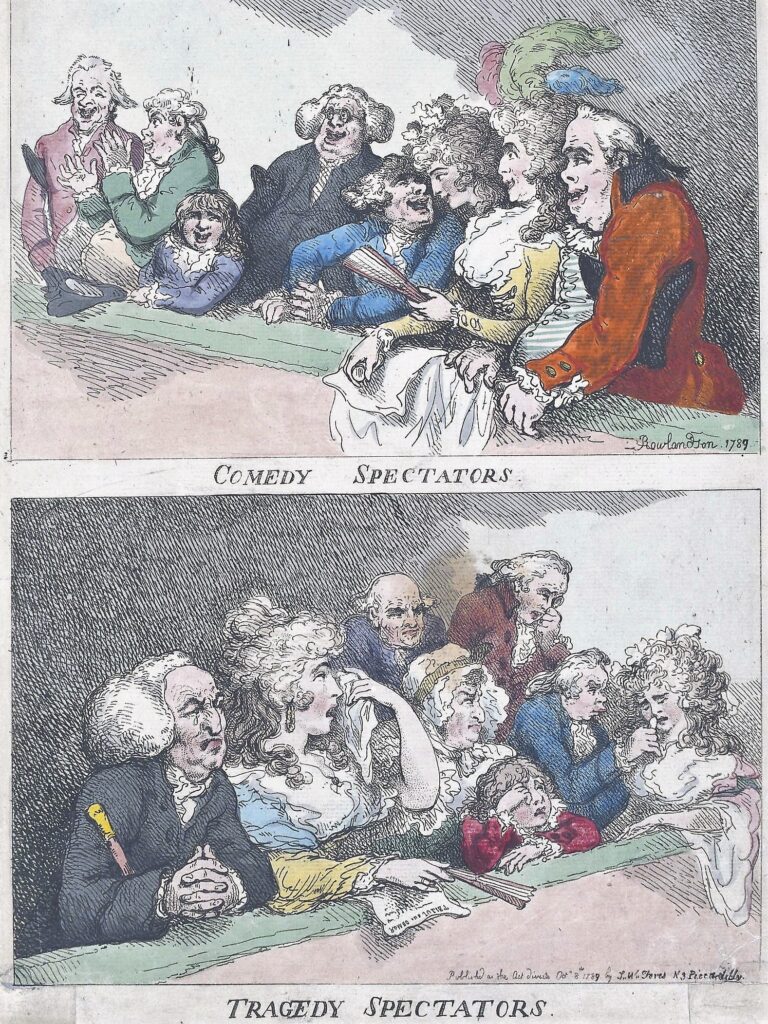 On a similar theme, in 1807  Rowlandson drew ‘Comedy in the Country. Tragedy in London.’ 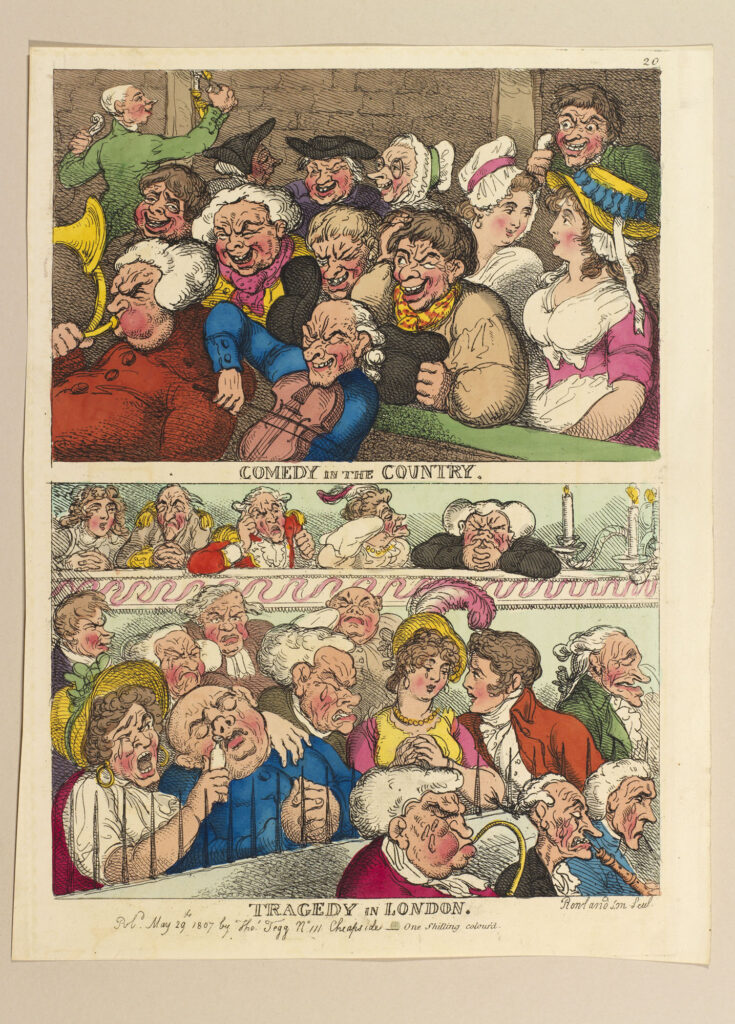 It appears on the Royal Collections site, which has this description: “A hand-coloured print of two versions of a musical evening with two horizontal designs. In the top design (Comedy in the Country), the orchestra play while the audience are hysterical with laughter; a fat man blows hard down a French Horn whilst a grotesque fiddler plays in the foreground. In the bottom design (Tragedy in London) the audience including the orchestra, weep with emotion; a woman administers smelling salts to a man whilst a dandy consoles his weeping handsome wife.”

Clearly, Rowlandson spent a lot of time  sketching inside the theatre. Here is another one showing a performance in progress. 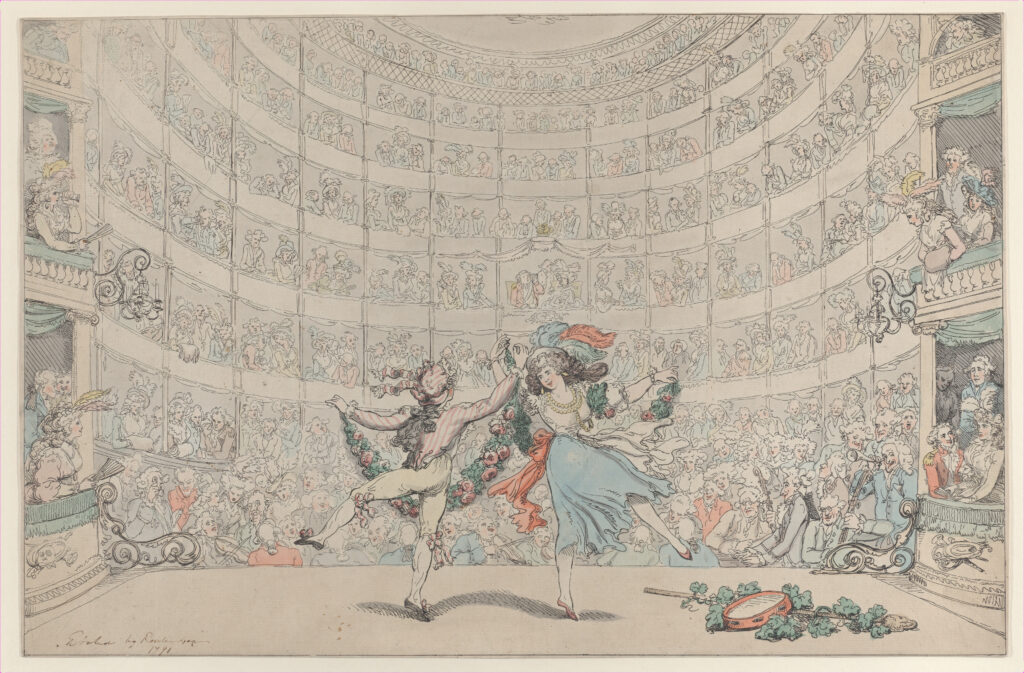 Once more it is shown via the Metropolitan Museum. It has the lengthy title: “The Prospect Before Us, Respectfully dedicated to those Singers, Dancers, & Musical Professors, who are fortunately engaged with the Proprietor of the Kings Theatre, at the Pantheon”.

It appeared on January 13, 1791 and the description  on the museum site states that it shows:

“The interior of the Pantheon, reconstructed as a theater, seen from the stage. Two opera dancers hold garlands of roses in the foreground. The theater is crowded with admiring spectators”.

The Boston Public Library has a Rowlandson image of  what happens after the performance, with a soldier attempting to pick up a lady on the steps outside the theatre at Covent Garden: 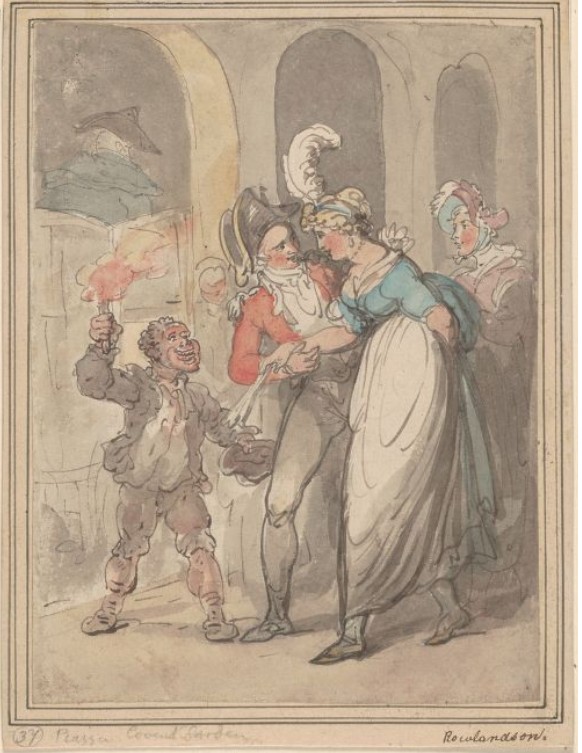 And finally, a reminder that theatres always suffered from the threat of fire. This also appears on the WikiGallery site: 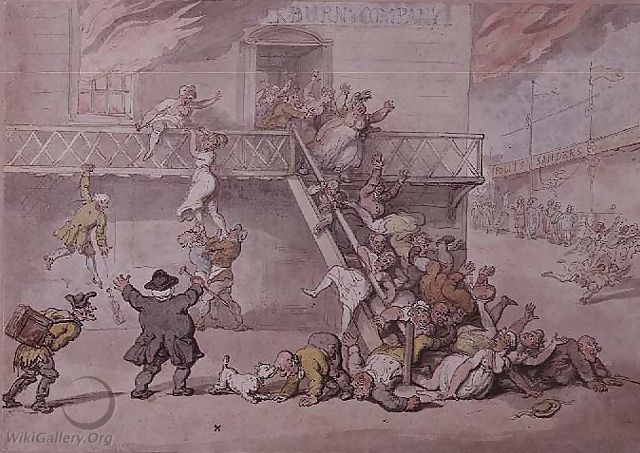