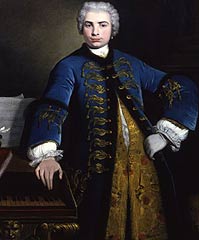 January 24th marks the birthday of Carlo Broschi, one of the most famous of the 18th Century curiosities, the castrati. He was born on this day in 1705 near Naples. Like several thousand poor Italian boys each year, he was castrated in the hope that this would preserve his high-pitched singing voice. But unlike so many of his fellow-eunuchs, he did become a singing sensation, and did become rich and famous. He adopted the name Farinelli, supposedly after an Italian magistrate who possibly acted as patron, and made his first public singing appearance in 1720. Two years later he made a sensational debut in Rome, apparently out-performing a leading trumpeter (for whom  the composer Nicola Porpora had written an obbligato) by holding and swelling a note of prodigious length, purity and power. Not only did he out-blast the trumpeter but added his own variations, roulades and trills which left the audience enraptured.

He went on to wow Venice, Vienna and Milan and in 1734 arrived in London, where Handel had established the Royal Academy of Music at a theatre in the Haymarket with the castrato Senesino as lead male singer. Senesino had been on a reported salary of some two thousand guineas – a vast sum of money. Handel and Senesino were constantly at loggerheads and when Senesino went off and set up a rival company known as the Opera of the Nobility in Lincoln’s Inn Fields, it was here that Farinelli performed. He was a stunning success and was showered with expensive gifts and awarded a salary of 1500 guineas per annum. But one season’s meteor was the next season’s damp squib, and his popularity started to wane to the extent that when he received a summons to go and visit the Spanish court in 1737 he did so with alacrity. On his way he stopped off to sing for Louis XV, being rewarded with a large pile of money and his portrait framed with diamonds. He arrived in Madrid in August 1737, expecting to stay a few months, but remained for nearly a quarter of a century… 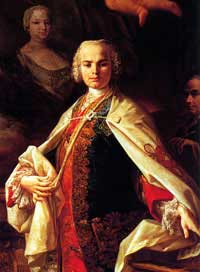 The court of King Philip V must have been a strange place – the King suffered from extreme melancholia and it was hoped that Farinelli’s exquisite voice would drive away the sadness. And so he sang, night after night, the same songs over and over again, until the old king died nine years later. This was not the end of Farinelli’s influence – far from it. The new king was Philip’s son, Ferdinand VI. He too required an exclusive access to the voice of Farinelli (who never sang in public again) and would accompany him on the harpsichord while Farinelli sang duets with  the Queen. He was  a close personal friend of them both and was made Knight of the Order of Calatrava in 1750, an honour of which he was inordinately proud. With the honours came power and influence (some have described him as being de facto prime minister, although he does not appear to have meddled in politics). Nevertheless he was extremely influential and it must have been a huge blow when Ferdinand died in 1759 and was succeeded by his decidedly non-musical half-brother. Farinelli stayed long enough to pick up a decent pension, then packed his bags and went back to Italy. He lived in considerable wealth but increasing loneliness at Bologna until his death  in 1782. His estate include art works by Velázquez and Murillo as well as a violin crafted by Stradivarius and a number of exquisite harpsichords and early pianos.

The castrati remained popular throughout the 1700’s, but fashions changed in the following century and they went out of favour. It is said that the effect of ‘the snip’ was to make the castrati not just long-lived (and hirsute!) but also altered their musculature so that they ended up extremely tall and with extended ribs and hence a huge lung capacity. This is what gave them the ability to hold a note for so long. The practice of castrating young boys for this purpose was banned in Italy in 1870, and the singing role in arias etc has been taken over by mezzo-sopranos or countertenors. Somehow baroque music will never sound the same again – poor Handel would be turning in his grave.