Whenever a new fashion appears, there are those who ridicule it. After the excesses of exaggerated posteriors and padded embonpoints you might think that the “elegant” high- waisted lines which became popular in 1794, and which presaged the regency look, would have met with approval. Far from it – the dress tight under the bust dropping to the ground without a hint of a waist was a source of ridicule. A parody of the popular song “Shepherds I have lost my love – Have you seen my Anna?” turned it into “Shepherds I have Lost My Waist Have you seen my body?”

Shepherds, I have lost my waist,

Have you seen my body?

I’m quite a hoddy doddy!

For fashion I that part forsook

Where sages place the belly;

For cheesecake, tart, or jelly.”

In some instances additional lines were added:

“Never shall I see it more,

My body to my legs restore,

Then I shall cease from mourning.

Folly and fashion do prevail

To such extremes among the fair,

A woman’s only top and tail,

The body’s banish’d God knows where!”

Here, to illustrate the verse, is a cartoon by my favourite caricaturist Richard Newton, courtesy of the British Museum. 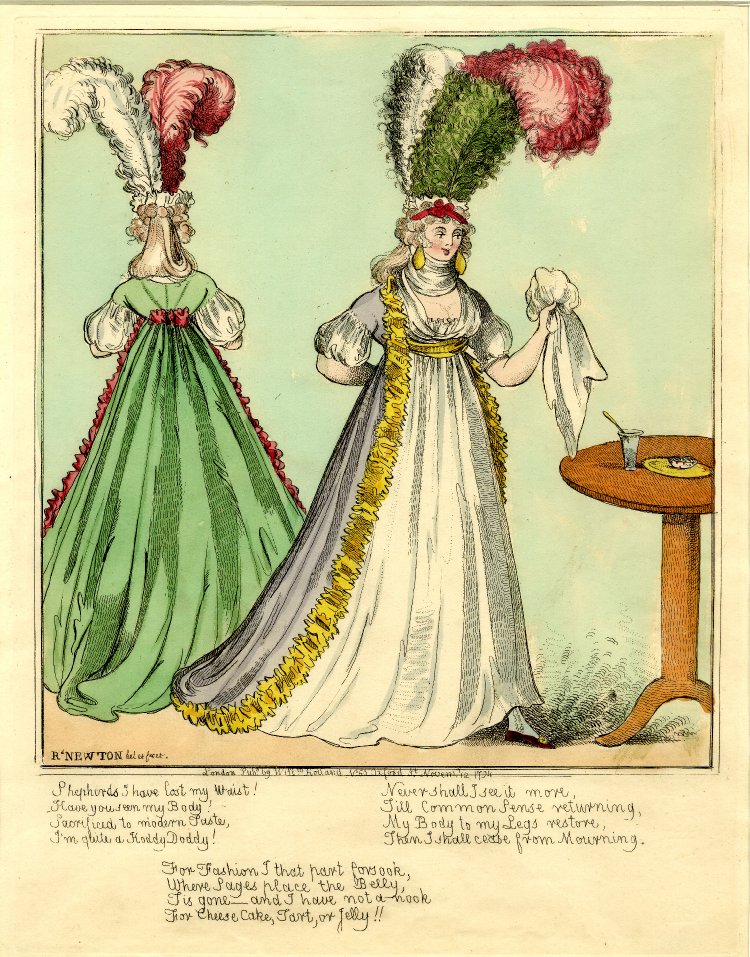 The Museum’s own description states: “Front and back view of two ladies (or one lady) dressed identically. One (right) looks to the right at a round table on which are a jelly-glass and a tartlet, holding up a napkin in her left hand, the right behind her back. The other is behind her and on the left. She wears large ear-rings. The high-waisted dress has a flowing line with an overdress forming a train, and is thus less skimpy than others of the period. Two huge erect ostrich feathers decorate the head.”

Compared with some of the monstrosities of the Georgian era,  this seems positively tame to me!