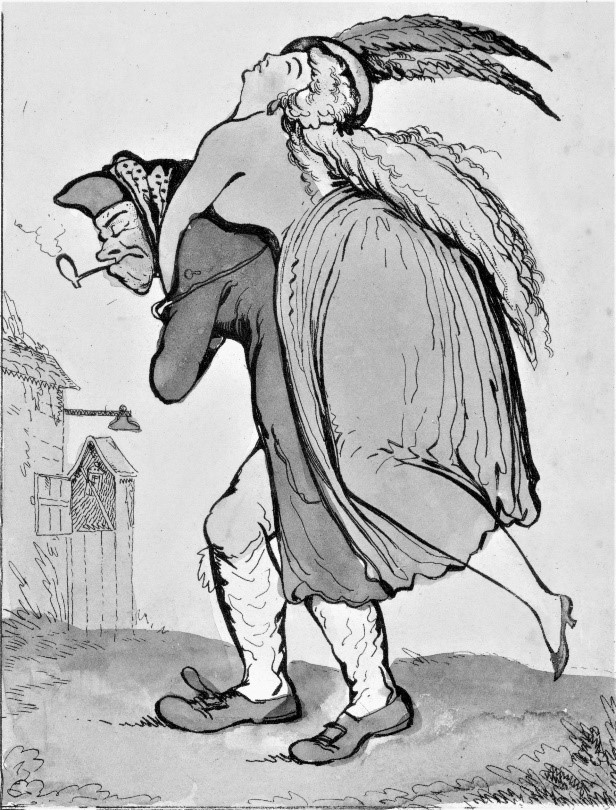 Detail from a caricature by Richard Newton, courtesy of the Lewis Walpole Library at Yale.

In 1729 the government decided to try and do ‘something’ about the social ills known nowadays as the Gin Craze. The result was the first Gin Act, passed in 1729 and aimed at  increasing duties on distilled spirits, charging fees to all distillers for a licence, and introducing the idea of paid informers to help the Excise Men nail those dealing in the pernicious spirit.

The late 1730s saw a constant battle in the streets over gin, with the ‘mob’ targeting informers, fighting off the constables, and, if possible, grabbing as much free booze as they could. In 1735, one small riot seems to have involved the simple storming of a gin shop, leading to the newspapers carrying a story that on Tuesday 8th April ‘At Seven Dials occurred a Riot at the closing of a Gin Shop owned by Captain Speke. When the Mob became outrageous in their attempts to force the stoutly defended Building, Justice of the Peace Mr Maitland read the Riot Act but the Mob refused to disperse peaceably as required, the Guard of the Tower was called to enforce the Peace with Ball, Butt and Bayonet, after which all was quiet. The Shop was wrecked by Intruders and all the Genever Spirits lost.’

An explanation of what had happened was given in a satirical piece, purportedly written by someone calling themselves ‘Cholmondeley-Fitzroy, Lord Foppingham.’ He wrote:

‘Here I must add, the remarkable facts that the honest builder Jack Church had obtained in regard of the gin shop of Captain Speke. This novel innovation of trade has no entrance, doors, nor any visible shop-man. In their stead, one pays custom by introducing coin into a slot, whereupon gin issues forth from a spout below. The expense is of the common sort for such trade – perhaps one shilling for a pint bottle. Their trade was brisk. Church struck up an acquaintance with two Tipstaffs, there to serve a summons … They had, he heard, been unable to serve it, their diligence baffled by the extraordinary nature of the place. None had been observed to enter or leave. Boldly, that night, Church effected an entry to the premises, in search of incriminating evidence. He reports that the place is so shuttered as to be wholly dark within. The gin is stacked up, crammed into every space.’

The idea of a slot-machine-operated gin-delivery system was certainly new and it was designed to get round the law by concealing the identity of the person selling the liquor. Being a blank wall with no visible door meant that the Excise Officers did not know who to go against, whereas the legislation stated that they had no power of entry unless the identity of the retailer was known to them. It was actually the idea of Dudley Bradstreet, an Irishman born in Tipperary in 1711 and who subsequently went on to publish his story in a book published in 1755 under the modest title of The Life and Uncommon Adventures of Captain Dudley Bradstreet Being the Most Genuine and Extraordinary, perhaps, ever written.

The enterprising Captain Bradstreet had an interesting career, including being a government spy, criminal, entrepreneur, brewer, playwright and serial seducer. Some reports suggest that the good Captain already had a murky background linked to the trade in gin – that he himself had traded gin illegally and also that he had acted as an informer, securing the conviction of others. He certainly was well-versed in the new law and its limitations and apparently used his last £13 to buy a consignment of gin from Langdales Distillery in Holborn. He then nailed a wooden figure of a cat’s head to the wall of a building rented in the name of a lawyer-friend in a quiet area behind the Barbican in Islington. In doing so he established what was soon known as a ‘Puss and Mew shop’ – ‘Puss’ because a buyer would address the cat with the words “Puss, do you have two penn’orth of gin?”  to which Bradstreet, hidden from view, would answer in the affirmative by replying “Meouw”. The payment would be inserted into a small tray which would then be retracted, following which the appropriate measure would be poured by funnel down the tube, to be collected in the recipients receptacle of choice – or swallowed ‘down the hatch’ if he or she was desperate enough! 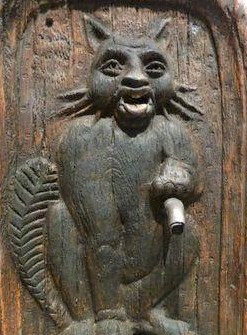 In the book, Bradstreet explained his scheme:

‘The Mob being very noisy and clamourous for want of their beloved Liquor, which few or none at last dared to sell, it soon occurred to me to venture upon that Trade. I bought the Act, and read it over several times, and found no Authority by it to break open Doors, and that the Informer must know the Name of the Person who rented the House it was sold in.

To evade this, I go an Acquaintance to take a House in Blue Anchor Alley, in St Luke’s Parish, who privately convey’d his bargain to me. I then got it well secured… and purchased in Moorfields the Sign of a Cat, and had it nailed to a Street Window; I then caused a Leaden pipe, the small End out about an Inch, to be placed under the Paw of the Cat; the End that was within had a funnel in it.
When my House was ready for Business… I got a Person to inform a few of the mob, that Gin would be sold by the Cat at my Window next day, provided they put the Money in its Mouth, from whence there was a Hole that conveyed it to me… I heard the chink of Money, and a comfortable Voice say, “Puss, give me two Pennyworth of Gin.”

I instantly put my Mouth to the tube, and bid them receive it from the Pipe under the paw, and then measured and poured it into the Funnel, from which they soon received it. Before Night I took six Shillings, the next Day above Thirty shillings, and afterwards three or four Pound a Day…’

The ruse soon caught on and in the space of one month Bradstreet cleared £22. No-one could see who was sitting inside behind the sign of the cat and therefore no-one could act as informer and pass details to the Excise men. All that the authorities could establish was that the premises were rented by a lawyer who declined to name the occupier, claiming it was in breach of his client confidentiality.

Sadly, nothing remains of the premises used by Bradstreet and the entire Blue Anchor Alley disappeared from maps when the site was redeveloped with a modern, concrete, block of flats in the 1960s. As for the sign, this has long disappeared although a replica can be seen at the Beefeater Gin Distillery premises at Kennington in London.

Before long the sign of the Black Cat was everywhere, an indication that both retailers and purchasers were determined to flout the law. Soon, Captain Bradstreet was able to emerge from the dark room in which he would barricade himself in, and retire from this particular venture in order to concentrate on his main interests, namely wine, women and song. He was a chancer, a flamboyant extrovert, going on stage, writing a play and bragging about his numerous affairs. He died in 1761, long after the ‘copycats’ had been caught, prosecuted or driven out of business.

2 thoughts on “After effects of the first Gin Act – riots, Puss & Mew shops and the enterprising Captain Dudley Bradstreet”