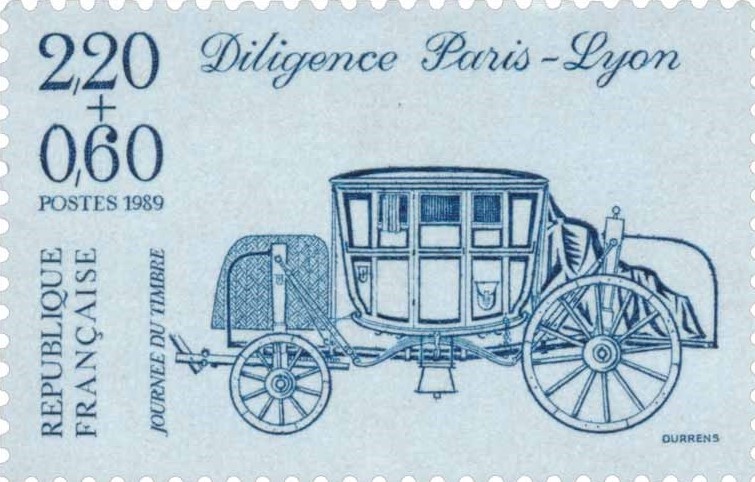 Back in 1989 the French postal service issued a stamp featuring  the French version of our stage coach, called a diligence – or ‘dilly’ as it was  sometimes referred to. I only know about it because I inserted the words ‘Grand Tour’ into the search page on the Yale Center for British Art site, and it brought up this rather  lovely water colour by my fave artist Thomas Rowlandson, entitled ‘The Paris Diligence’.

Apparently the dilly was  one of the forms of transport used by the less well-off  travellers on their leg of the Grand Tour, heading from Paris to Lyons en route to the Med. and on into Italy. Obviously the wealthier aristos would have their own carriage, and would go from Lyons into Switzerland, through the Alps, and if necessary have the carriage dismantled and carried through the more mountainous terrain before it was re-assembled for the ride down across to Florence, Venice, and on to Rome and Naples. But for those doing Europe on a shoestring you would have no choice but to share your journey with a cart-load of other tourists.

I had not appreciated that this meant sharing your journey with as many as fifteen other people. There appears to have been three separate sections on the velocipede – and half a dozen passengers could sit perched up on the roof. I like the detail shown by Rowlandson – the two beggars  seeking alms from the passengers at the rear of the coach; the startled sow and her piglets; the inn sign for ‘Le Qoque en Pate’; the nuns kneeling before the cross in the background, watched by a group of monks; the motley bunch of passengers which include soldiers and members of the clergy.

The original of the Rowlandson  image  appears to have been reproduced as a hand-coloured print in 1810, when it was published by Thomas Tegg. A pirated copy was then published in Dublin under the title of ‘French Travelling’. The British Museum site has this somewhat garish example: 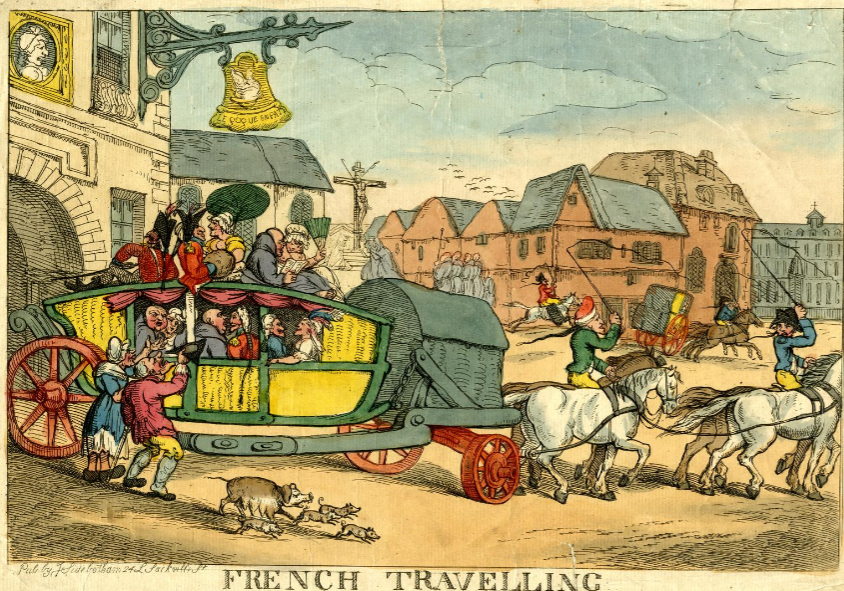 According to Wikipedia an English passenger on the Le Havre to Paris diligence in 1803 had this to say about the cumbersome conveyance:

“A more uncouth clumsy machine can scarcely be imagined. In the front is a cabriolet fixed to the body of the coach, for the accommodation of three passengers, who are protected from the rain above, by the projecting roof of the coach, and in front by two heavy curtains of leather, well oiled, and smelling somewhat offensively, fastened to the roof. The inside, which is capacious, and lofty, and will hold six people in great comfort is lined with leather padded, and surrounded with little pockets, in which travellers deposit their bread, snuff, night caps, and pocket handkerchiefs, which generally enjoy each others company, in the same delicate depository. From the roof depends a large net work which is generally crouded with hats, swords, and band boxes, the whole is convenient, and when all parties are seated and arranged, the accommodations are by no means unpleasant.
Upon the roof, on the outside, is the imperial, which is generally filled with six or seven persons more, and a heap of luggage, which latter also occupies the basket, and generally presents a pile, half as high again as the coach, which is secured by ropes and chains, tightened by a large iron windlass, which also constitutes another appendage of this moving mass. The body of the carriage rests upon large thongs of leather, fastened to heavy blocks of wood, instead of springs, and the whole is drawn by seven horses.”

The Rowlandson diligence looks as though it was the equivalent of the stretch limo. Diderot’s Encyclopedia has  this picture of  a more truncated version: 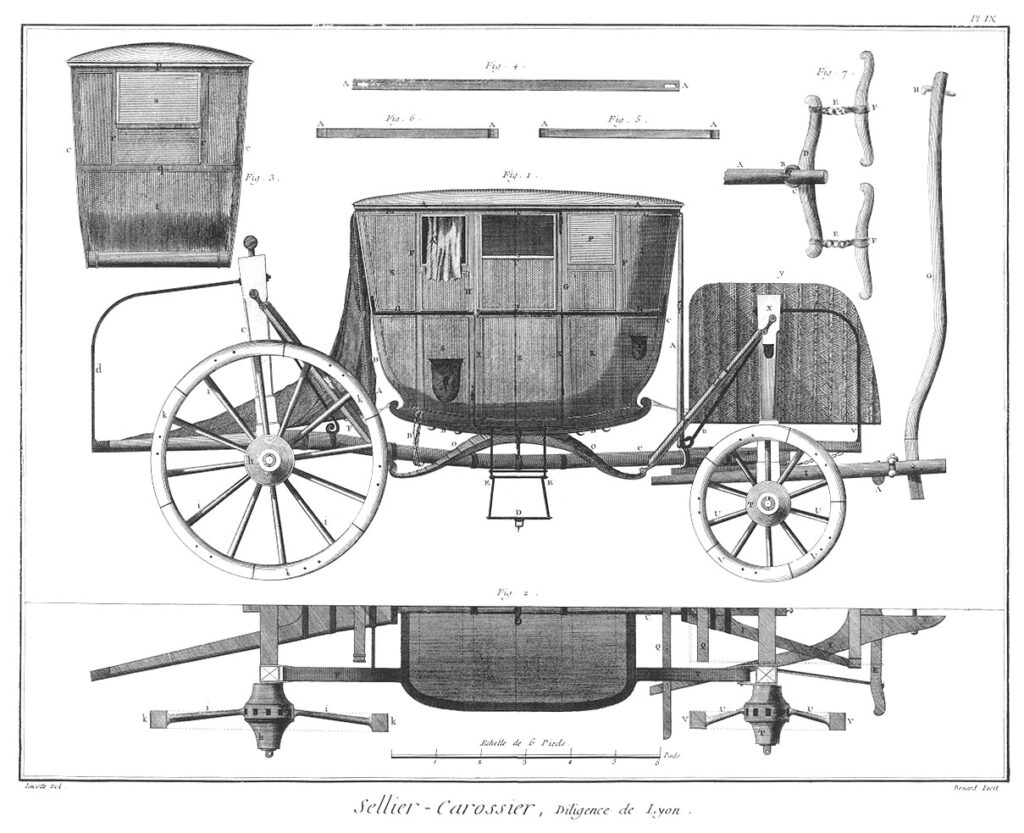 Plodding along at an impressive six or even seven miles an hour, drawn by small sturdy Norman horses, the Paris to Lyons leg of the journey must have taken quite a few days – the distance is just over 280 miles. Just imagine the bone-shaking, genuinely shocking, monotonous tedium of spending four days in one of those contraptions, even if the Diderot example shows that the leather straps were eventually replaced by leaf springs.

Some passengers liked the experience. Writing in 1739 the traveller Sacheverell Stevens enjoyed the journey from Paris to Lyons, especially the speed (“300 miles which it performs in four days”) and the cost (“the fare for each passenger is 100 livres and everything found upon the road… but not so expeditious and easy as a post chaise, but infinitely more diverting, occasioned by the odd assemblage of the passengers such as monks, pilgrims, officers, courtezans etc.” On the other hand, unless you fancied experimenting  with your schoolboy French, conversation may have been fairly restricted, even with the courtezans…. The journey would have been noisy, tedious – and lacking in toilet facilities!

The diligence could keep pace with the canal boats, but was no match for the trains once they started to criss-cross Europe. And of course the trains altered the whole idea of the Grand Tour – it was no longer the preserve of the nobility. Mass transit brought culture to the middle classes and before long, tourism was a major industry which ended up destroying the charm and allure of the cities being visited. Before that, you might have dallied in your dilly, but at least you didn’t harm the environment…

One Response to “Always use due Diligence …. riding the dilly from Paris to Lyons.”