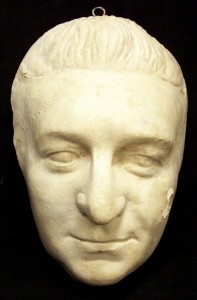 As a follow-up on my post about the funeral of Eleanor Hall  (here) I have asked Philip Spinks, a retired ambulance paramedic who has been researching the funeral of David Garrick, to do a guest blog for me.  He writes:

“Recently, at my local records office, I came across a contemporary copy of the 1779 funeral bill of the actor and theatre manager David Garrick. I didn’t know much about undertakers’ bills, let alone those of 250 years ago, and was keen to discover more to make sense of it all: ‘it all’ entailed eighteen closely written pages Mister Ireland, the undertaker, had presented to the Garrick’s executors.

Was this account, with all its trappings and paraphernalia, typical of a funeral for the wealthy? Garrick left about £100,000, so perhaps it was. Liza Picard’s book Samuel Johnson’s London gave a few pointers to the cost of London funerals at that time: a poor person’s funeral may cost about £15 and one for the ‘middling sort’ about £100. Garrick’s funeral bill totalled £1,391! 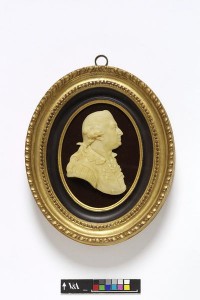 Portrait of David Garrick in wax, courtesy of V & A Museum

Secondary sources gave evidence of the splendour and scale of Garrick’s funeral; most remarking upon the size of the procession from Garrick’s house in Adelphi Terrace, near the Strand in London, to Westminster Abbey where he was buried; a funeral that was acknowledged as having been the grandest of any commoner prior to that of Lord Nelson in January 1806. But none of these sources gave information for comparison.

So I was glad to find the bill and details of Eleanor Hall’s funeral of 1780 in Georgian Gentleman. It showed among other things that, excepting the ‘bling’ that accompanied Garrick’s funeral, many of the items and practices were common to both and de rigueur for the time – it was only the scale that differed. The Hall residence had black mourning in the parlour and stairs; the Garrick home was likewise dressed, but the great actor lay-in-state for three days in a mourning room festooned with black ostrich feathers, silk hangings emblazoned with the family arms, a large black pall suspended above the fine red velvet-covered coffin, a room in which stood dozens of candlesticks and sconces (nearly one hundred pounds of candles were burned) with a separate area for the King and Queen to pay their respects; men in mourning dress guarded the property from the thousands of people who filed past the catafalque.

Both David Garrick and Eleanor Hall  were lain in three coffins (an elm coffin enclosed in a lead one, the whole being placed in a larger, outer coffin also made of elm. ‘Poor’ people had only one wooden coffin.) Over twenty times more invitation cards were distributed from the Garrick household than for Eleanor. But it is perhaps the procession to the burial place that showed the difference between the two funerals. Eleanor’s funeral cortege with four carriages of mourners to follow the route to Bunhill Fields (and having to pay a road toll en route) was a rather staid affair compared with Garrick’s thirty five coaches, drawn by caparisoned horses, the carriages carrying the great and good of London court, theatre, literary and social circles, with foot- and horse-men alongside them all with, at the procession’s head, the High Constable of Westminster, with soldiery ensuring the way was clear. Officials and mourners alike wore specially ordered gloves, cloaks and hatbands. And although Eleanor’s hearse must have been saluted by those pedestrians whom it passed, Garrick’s cavalcade was a subdued spectator sport with thousands, having waited for hours, lining the route. One thing is for sure: Eleanor’s cortege would have arrived at the burial ground on time: Garrick’s funeral service commenced at 3.30 p.m. – two and a half hours later than planned. 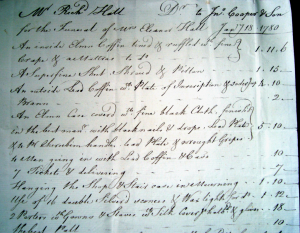 One ‘rite’ was missing from Eleanor’s obsequies. During the period of Garrick’s funeral, three churches were fully dressed in mourning: St Martin in the Fields, Garrick’s parish church; Hendon church in north London where Garrick was lord of the manor; and in Hampton-on-Thames church, where the Garrick’s had their country house.

Eleanor had had a ‘middling sort’ of funeral with the honour and respect paid to her as much as that of a wealthier family. When Mister Cooper, the Hall’s undertaker, presented his bill for a little over £50 it was probably received and paid without fuss. But the £1,391 charge for Garrick’s funeral was still outstanding several years later.”

The Westminster Abbey website  describes the statue and its inscription in some detail. It also records that when David’s widow died, some forty-three years after her husband, she was buried alongside him and the brass inscription reads:

3 Responses to “An expensive goodbye – the funeral of David Garrick, 1779.”