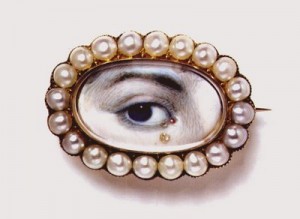 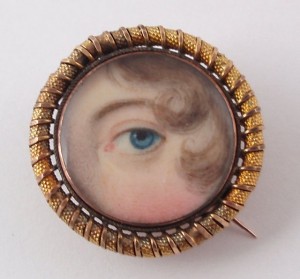 It  may not be to everyone’s taste, but it became the fashion after the 1790’s to commission a miniature painting of one of your lover’s eyes, usually on ivory, but sometimes on parchment, so that it could then be mounted as a pendant or locket and hidden from view – for instance behind a lapel. It was a way of declaring love, but keeping the recipient of that love totally anonymous.

Allegedly it originated with the Prince of Wales, when he fell for the charms of Maria Fitzherbert in 1784. There was no way he could admit his affection for the lady, who was after all twice married – and a Roman Catholic. Aware that their union would never be permitted Maria had fled to the continent, hoping that the Prince’s ardour would diminish. It didn’t – and as a declaration of his love he allegedly sent her a brooch containing an image of his princely eye. She reciprocated.

The Royal Marriages Act expressly forbade any union between the royal lovers by declaring that any marriage ceremony would be invalid unless it was made with the consent of the King.. It didn’t stop the pair going through a wedding ceremony on December 15, 1785 and it is interesting to conjecture that the Prince wore the ‘lovers eye’ on his jacket even when denying point blank to this father George III that such a ceremony had taken place. 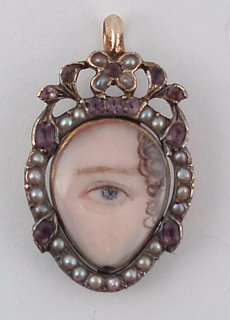 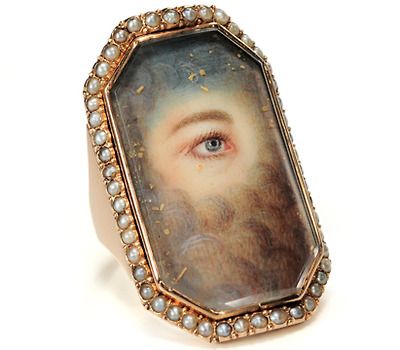 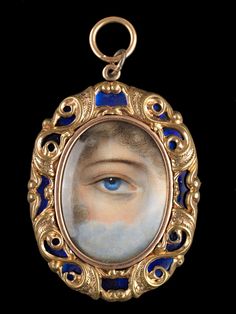 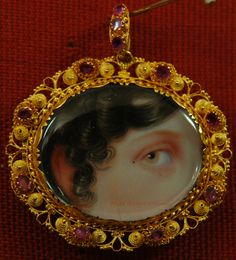 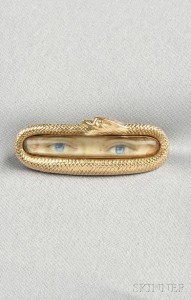 From being a symbol of secret or forbidden love it went on to become a more general way of carrying a memento of a loved one and often the picture of the eye would be mounted  within a gold frame which also had a compartment holding a lock of hair. In time many became remembrances of a deceased lover, and in that case the eye was usually framed in pearls (signifying tears… typical  of those mawkish Victorians….). 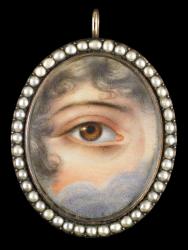 Eye pendant from the 1830’s, with clouds below…

Mostly the eye in question was of a lady – a few exist of male eyes with bushy eyebrows and the occasional hint of side-burns, but more usually the eye belonged to a woman and was painted to be kept by a man. Rarely is it possible to identify the sitter – that was, after all, the whole point of it. Indeed the eye was sometimes surrounded by clouds as a way of disguising other facial features (such as the bridge of the nose). 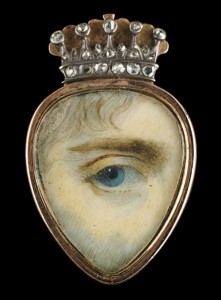 Some of them are fascinating pieces of jewellery, and the portraits were set into brooches, rings, lockets, pendants, small boxes, toothpick cases, and other small items. They mostly date from the  period 1790 to 1850 and perhaps as few as a thousand are known to exist. There are however many fakes, reflecting their high value and collectability. One of the largest collections belongs to Dr and Mrs  Skier, from Birmingham Alabama, and for anyone wanting more information it may be worth referring to the definitive book based on their collection entitled “The Look of Love – eye miniatures from the Skier Collection”, published by D Giles Ltd in 2012 and available on Amazon here. 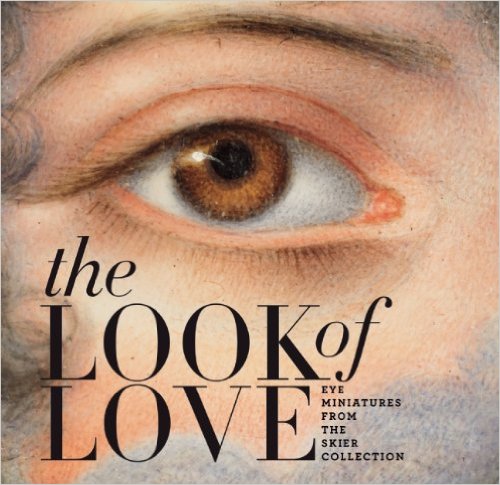