An Indenture of Apprenticeship, 1734

My 5xGreat Grandfather Francis Hall was a hosier in Red Lyon Street, Southwark. His own apprenticeship (as a haberdasher) lasted seven years and he qualified in 1728. A few years later he appears to have taken on his own apprentice and I recently stumbled across the Indenture. 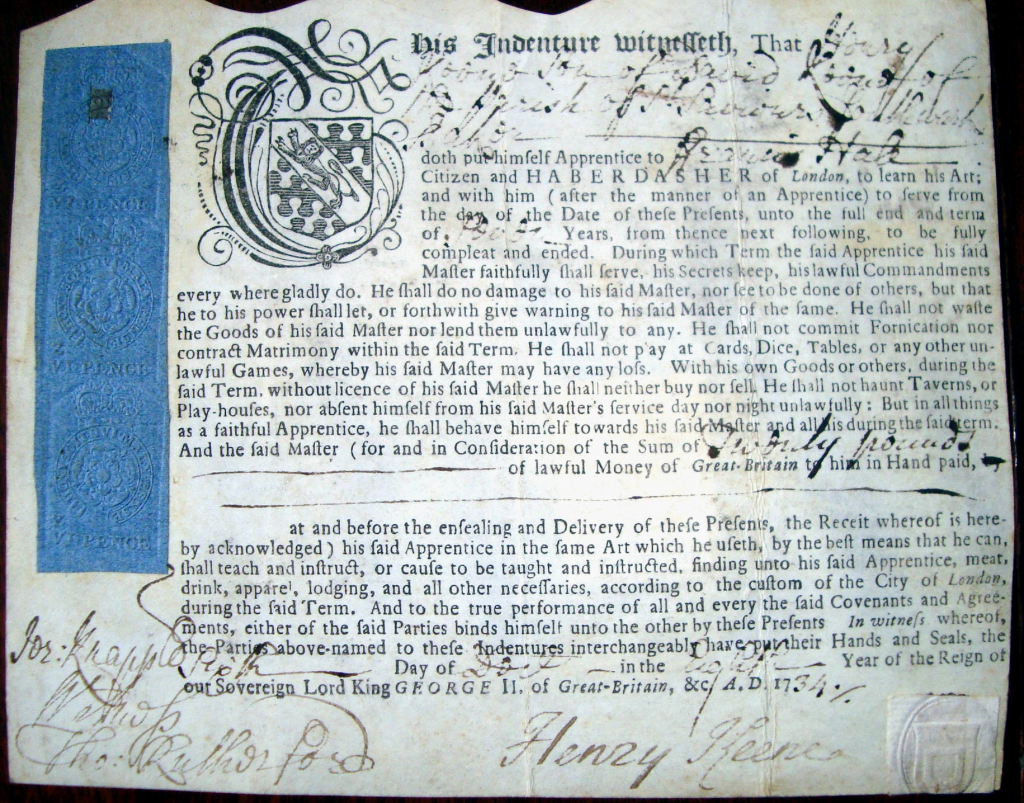 “Indenture” refers to the fact that the document is indented, leaving room in the margin for the stamp duty to be paid. The blue stamps were validated with a tiny square of silver sewn through the front page, and you can just make  this out, up at the top on the left hand side.

The indenture is on parchment, and would have been prepared in duplicate. The wavy line across the top was cut with a sharp knife as a way of stopping forgery. Both copies of the deed were cut at the same time with the same wavy line, as a way of ensuring both versions were identical – no-one could substitute the front page or add a second page because they would not be able to match the original border  exactly.

The indentured man was Henry Keene, and it appears that he (or rather his father) paid twenty pounds for the privilege of being trained how to make silk stockings. I rather like the prohibition on fornication  or getting married during the seven year training!  “He shall not  haunt Taverns or Playhouses” sounds fair enough, but seven years of no nookie sounds a tad Draconian! Especially as he was also banned from playing Cards, Dice or the Tables…

For all I know Master Keene completed his training and qualified, in 1741. Not all apprentices were prepared to buckle down for so long, and it is interesting reading in the newspapers of the day the reports of apprentices who had done a runner. One such is this one from the Leeds Intelligencer of 25th October 1774: 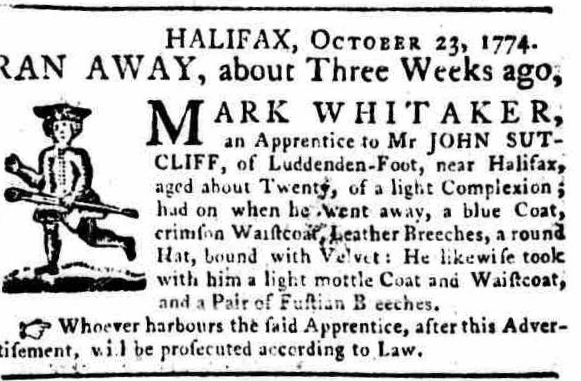 I love the woodcut image of the man on the run! It is interesting that there is no mention of a reward for anyone handing in Mark Whittaker – more a warning that anyone harbouring him would be prosecuted.

Post script: I am grateful to Philip Allfrey for pointing out my error in describing the Indenture as getting its name  from the indented margin. He helpfully points out that the wavy line was the indenture, not the margin. As evidence he  has referred me to the Oxford English Dictionary.

Indent (v. 1) II 2
“ To sever the two halves of a document, drawn up in duplicate, by a toothed, zigzag, or wavy line, so that the two parts exactly tally with each other; to cut the top or edge of two or more copies of a legal document in such an exactly corresponding shape; hence, to draw up (a document) in two or more exactly corresponding copies.“
Thanks for putting me right on that one, Philip. I stand corrected.

4 thoughts on “An Indenture of Apprenticeship, 1734”