Apparently Jane Austen wrote her first novel Love and Freindship (sic) in 1789 when she was 14. It is classed as  part of her “Juvenilia” – one of 29 stories bound up into three manuscript books. So, if she had her hero pay a visit for the weekend, what would he have packed in his bags? Well,  I can say what Richard Hall would pack for a weekend away, because he noted it in his diary in May 1784. (He was my great, great, great, great-grandfather). 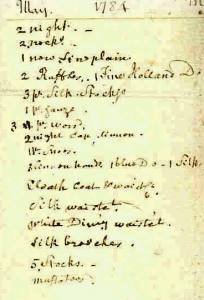 Some of the entries are hard to decipher but it appears to start off with shirts; first a couple of night shirts, then what appears to be two “neck shirts” including a “new fine plain” one. He packed two Ruffles plus “One fine Holland Ditto” as well as three pairs of silk stockings. One piece of gauze, three pairs worsted (stockings,  presumably) went into the case along with a couple of night caps made of “linnen”.

“W. shoes” may have referred to walking shoes but I cannot be sure and I have been unable to decipher the following line apart from seeing that it involved “one Blue Ditto and One Silk”

He needed a cloth coat and waistcoat (he called it “cloath”) as well as a silk waistcoat and a white dining waistcoat. Silk breeches and five stocks were packed as well as “muffatees”. Sadly I have no record showing what these were made from – they were fingerless gloves or wrist bands, often knitted but sometimes made of elasticated strips of leather, or even fancy ones made of peacock feathers. They remained popular for many years – even Beatrice Potter has Old Mrs. Rabbit earning her living by knitting rabbit-wool mittens and muffatees (~ The Tale of Benjamin Bunny).

One knitting site called Dancing with Wolves, states: “in the days before central heating, keeping warm in winter was a major challenge. We think we know about dressing in layers, but most of us don’t have to resort to wearing coats and hats and gloves indoors. But heavy layering was necessary. Working with your hands in mittens is clumsy at best. The solution? Wear muffatees.
“Muffatees are tube-like, fingerless mitts that cover wrist and hand up to the middle of the fingers, usually with an opening along the side for the thumb. The simplest, and possibly earliest form was comprised of the cuff or leg of a worn-out stocking, minus the foot. But in the 18th and 19th centuries, many pairs were sewn from warm cloth, or simply knitted of wool in plain or fancy patterns.”

Several sites give patterns – and incidentally Richard often called them wrist bands (pronounced “risbans” according to the one of the entries in his diary, at the same time as remembering that “waistcoat” was pronounced “wescote”).

They were thought to work on the basis of keeping  the blood warm  at the point where the pulse is felt at the wrist, but leaving the fingers completely unfettered. 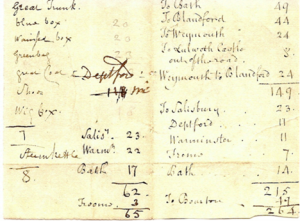 For longer journeys Richard would then record how many items of luggage were needed. For a trip lasting a fortnight (travelling the 264 miles from Bourton on the Water to Weymouth and Lulworth Castle and back) he needed seven items, all of them charged separately by the coachman. And then as an afterthought Richard showed an eighth item – his steam kettle!

This would have gone on board along with the Great Trunk, the blue box. the wainscot (i.e. wood-panelled) box, his green bag, his great coat, his shoes and his wig box.

The actual cost of travel was considerable. Richard shows a coach journey from Bourton to Evesham of 41 miles costing  over one pound eleven shillings: 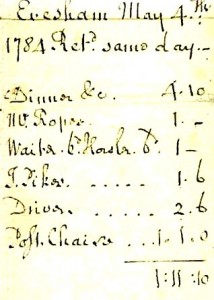 This would have been the equivalent of perhaps a hundred pounds (around 150 dollars) today. This included his dinner at four shillings and ten pence (equivalent to a buying power of perhaps $22 today); the waiter at sixpence (a couple of dollars); the horsler i.e. ostler a shilling (four dollars); and turnpikes one shilling and sixpence (six dollars).  The actual coach fare came to a guinea (getting on for a hundred dollars nowadays), and these figures have to be seen in the light of farm labourers having to get by on ten shillings a week!

Why the turnpikes? Their frequency increased as a direct result of the Duke of Cumberland’s campaign against the Jacobites in 1745/6 . Moving troops north to meet the rebels was handicapped by the dreadful state of the roads, and in the wake of the Duke’s criticism, Parliament encouraged local communities to form Turnpike Trusts. In return for filling in potholes, and re-surfacing and maintaining the roads, each Trust was entitled to levy a toll. Within a couple of decades roads had improved dramatically – to the extent that some coach operators were able to run throughout the night. Think Georgian carriage lamps and think of a coach-and-four thundering through the darkness! The result was a dramatic decrease in journey times. The cost of travel in turn came down, as the operators  reduced their overheads by cutting out  the need to stay  overnight, for instance on the journey between London and Bristol.

Mind you, there was still the risk of being ordered to “stand and deliver” by highwaymen. This picture shows the moment when a coach is hijacked.

But justice was as swift as it was lethal, and here we see the miscreant swinging from the gallows. I love the nonchalant behaviour of the horse-riders as they gossip nearby!

Incidentally all these cut-outs were made by my ancestor Richard Hall. He was born in 1729 and died in 1801 and I suspect that most of the cut-outs were made in the last twenty years of his life, possibly to entertain his young family. I am fortunate enough to have many of his journals  and papers, from diaries to accounts, and from shopping lists to inventories. For more details do have a look at my book The Journal of a Georgian Gentleman.

(The above post was first published earlier today on the excellent website of the English Historical Fiction Authors here.)

3 Responses to “And what would Jane Austen’s hero have packed for the weekend? Travel in the second half of the Eighteenth Century.”